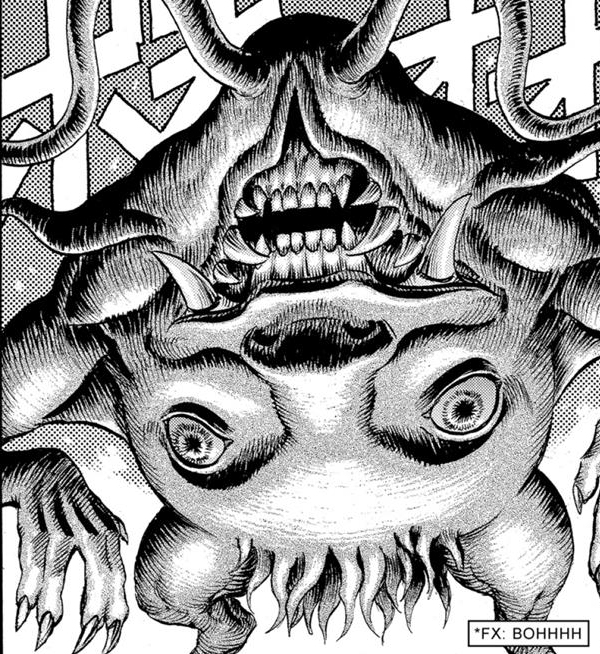 We're picking up right where we left off last time, though we have a lot more Apostles with "individual focus" at this point than in large, densely populated swarms. One such special boy is this humongous, upside-down head with arms and legs, its mouth shape almost evocative of a crab and two whiplike tentacles emerging where you initially want to expect a set of eyes. I like that it goes "BOHHHH." In the anime, it emits a kind of constant, pained, grunting chuckle which is really quite unsettling, especially with the walleyed stare of its huge, human eyes. Something about the scene really gives me a sense of the visceral horror that must come with knowing something intends to eat you. It's a horror everybody takes for granted because getting eaten by something is a topic of so much fiction and occasional real-world dangers. 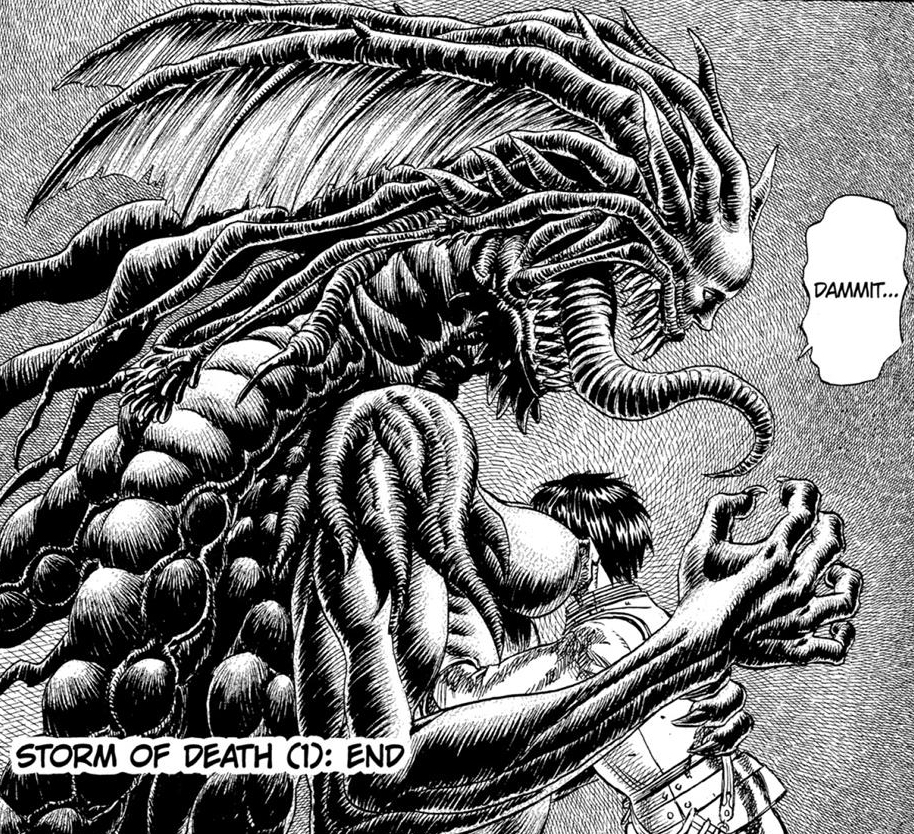 In one of the more famous moments, a certain character thinks he sees a beautiful, naked woman beckoning to him, and he probably does, since it does seem like Apostles can take their original human form as they see fit, or at least a close enough semblance of it. I'm not really sure what the rules are, since many of them still look a bit ghoulish and "off" at even their most human.

Anyway, said character decides to just go for it because he feels doomed either way, and here we have his famous last words. This is still technically the nicest thing that happens to anybody present for the two or three seconds before his head gets bitten off.

The Apostle's design ain't bad, either. I like her human face giving way immediately to a huge Giger-mouth and those big, earlike fins on her head, almost like huge moth antennae! 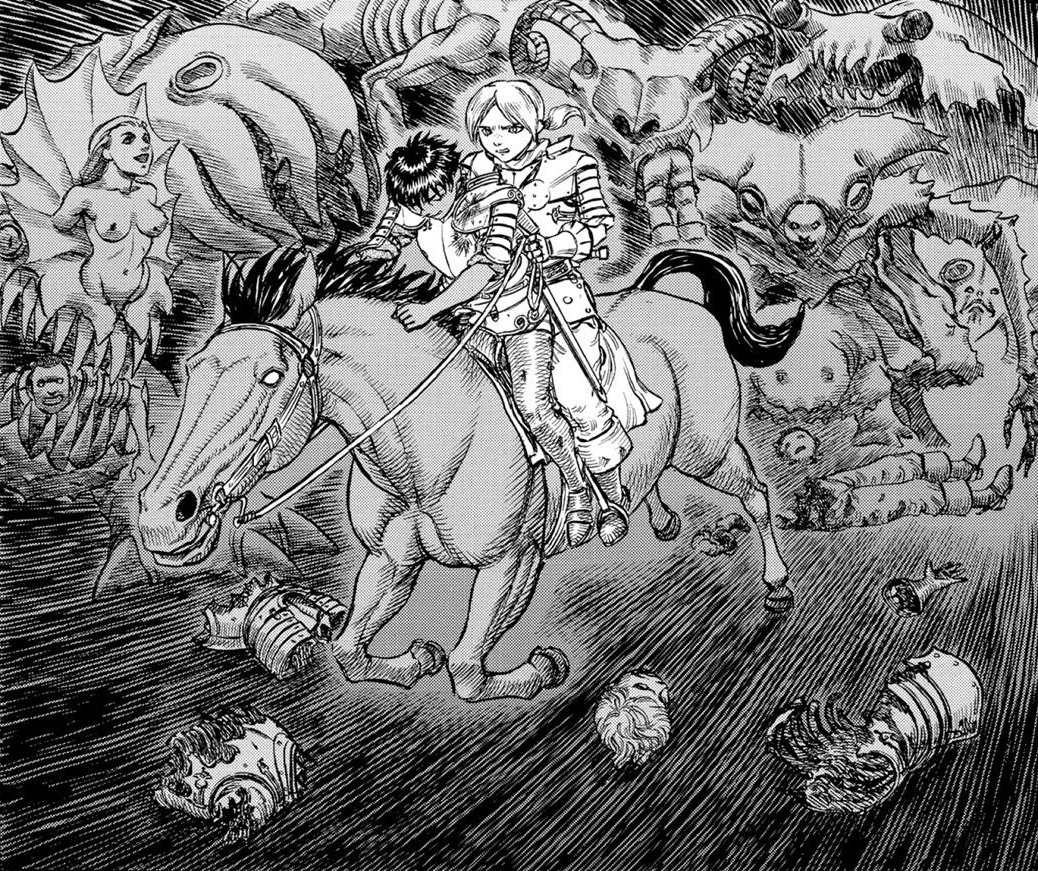 Another nice "horde" here, but the monsters are big enough that we can just go left to right; first we've got a lady who protrudes from a pretty interesting "fan" on the snout of her monster-body, which kinda reminds me of a really messed up star-nosed mole this way. Right next to her is something with a face like a gigantic cuttlefish, then we have a bony goat sort of demon, a crablike entity and some other miscellany. Actually, all but the goat kind of have a sea monster vibe to me. 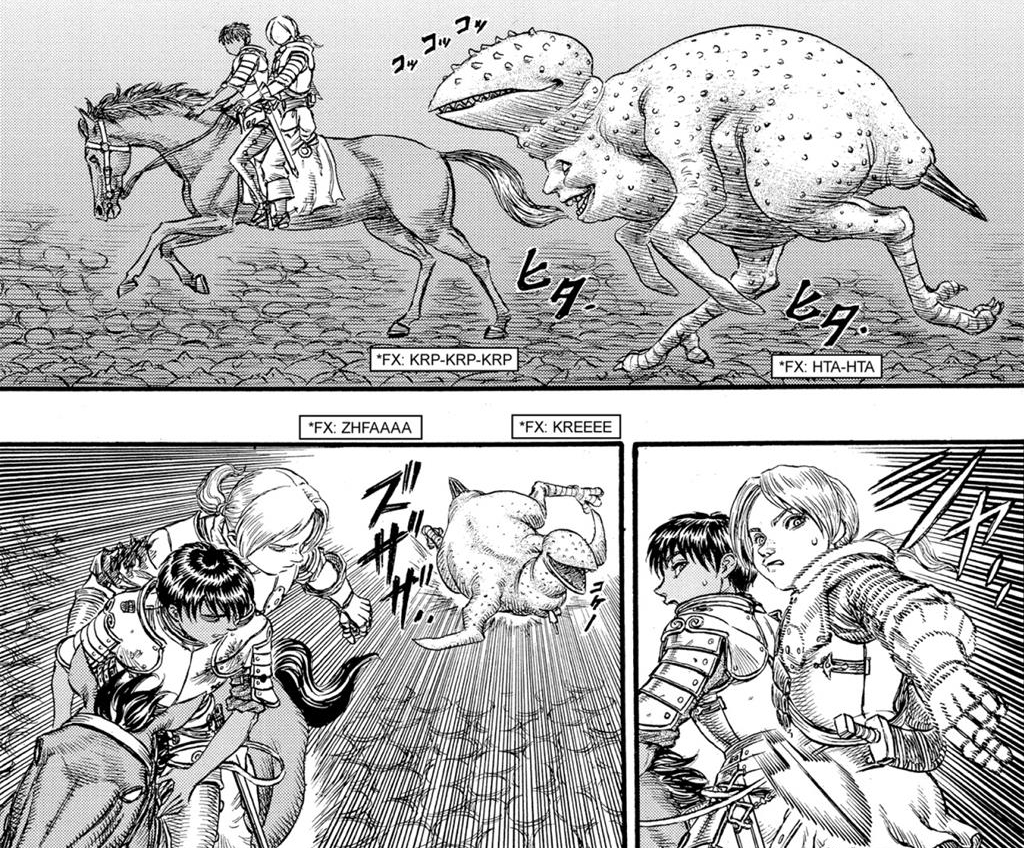 This has been one of my favorites since I first saw it in the anime, where they also decided it should be colored green. The positioning of the human face makes it fascinatingly weird and fairly creepy, but I kind of like all the rest of its anatomy without that face. Just a big, fat, plucked bird with a stinger and a cartoonish Audrey II sort of mouth. Perfection! Pity it comes and goes in just two panels. 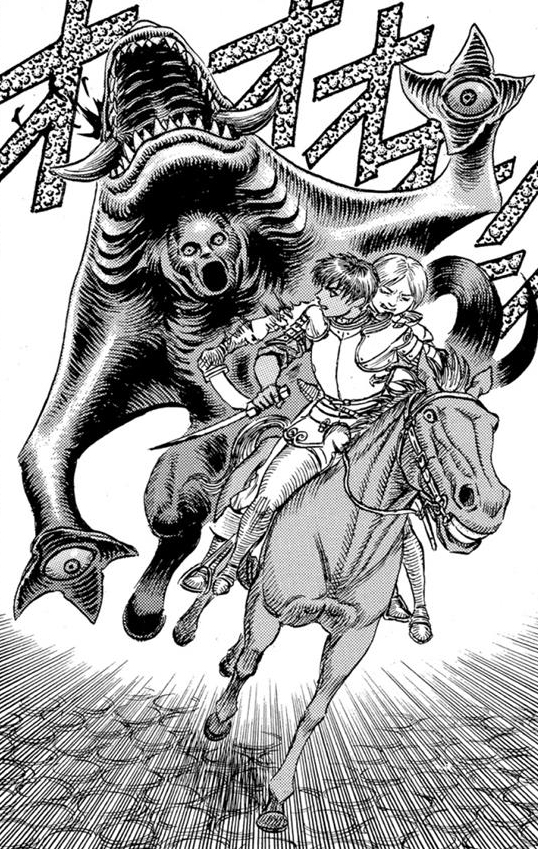 A one-panel weirdo now, shark-like with a howling, toothless face and bizarre arms. It's those four-petaled eyestalk hands that really landed this one a spot here...but doesn't it suck to actually use them for anything? You gonna grab a horse with your eyes, man?! 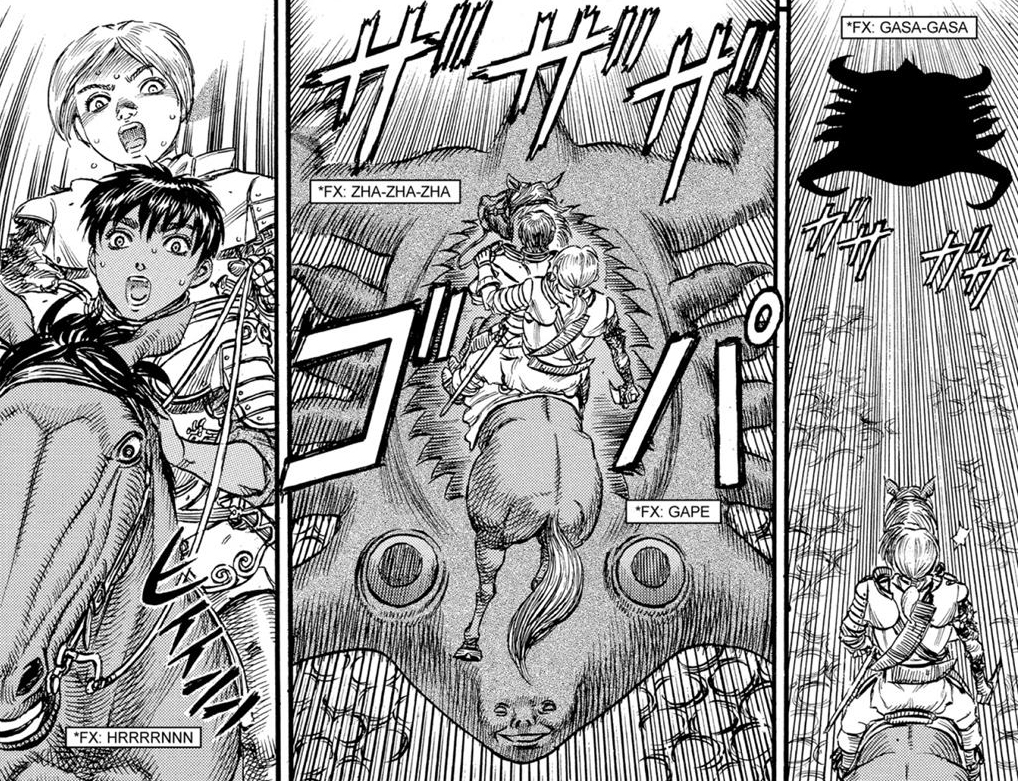 Speaking of the horse, this is quite possibly my favorite Apostle here, though another I'd like even more without the little weirdo man face. Its body shape is exactly that of a Pipa pipa or surinam toad, but with the addition of some big fishy eyeballs, buggy legs down its sides and a huge set of long, vertical jaws. The anime makes it clearer that it doesn't move, but lies extremely flat on the ground waiting to clamp shut on something, and I know the idea is probably that they sometimes eat other things, but I want to think this is in fact a form specifically to bite the legs off of horses. This person just really, really freaking hated horses. 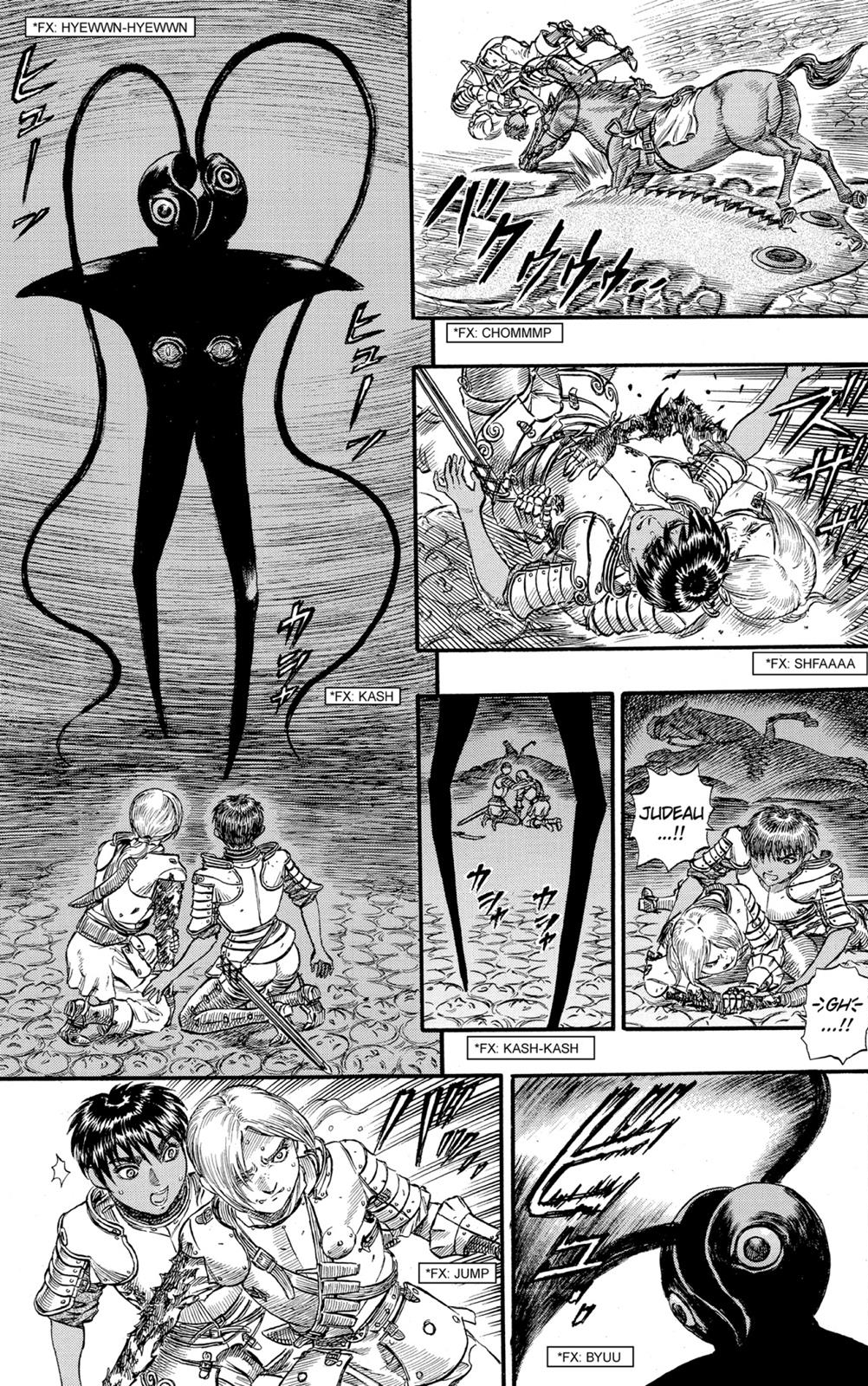 We get one last look at horse-chomper before we see another favorite of mine and, I think, one of the creepiest creatures in the whole manga. It doesn't even feel like the same sort of organic, fleshy hybrid we've been seeing, but something more alien and abstract. I love way its spherical head is split by that wavy seam that may or may not be its mouth, the goofiness and asymmetry of its upper set of eyes, the menacing intensity of its lower set, the lack of arms, the pointed legs, the two waving feelers, and that the whole thing is apparently pitch black or at least really dark. It's honestly such an amazing, unforgettable monster design that I feel like it deserved a much bigger role than this; that it ought to be some infamous bogeyman that stalks some haunted wood or abandoned ghost town.

It's also one of the scarier presences in the animated version, because the background was also mostly black. Seeing this totally wrong, totally emotionless thing looming only faintly in the darkness is a terrifying situation to fathom. 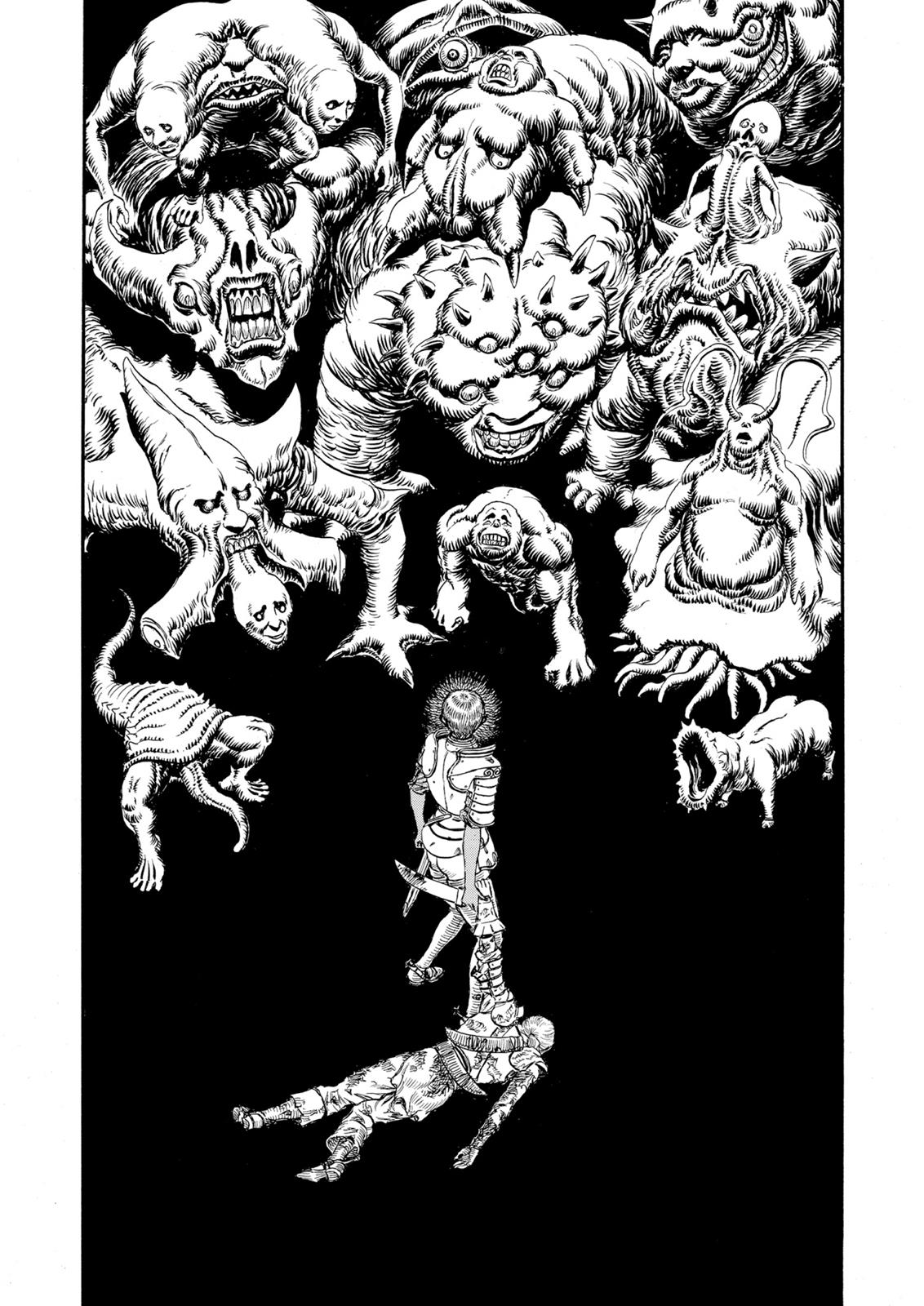 NOW we've got a horde worthy of thumbnail reviews!

First up is this splendidly creepy creeper, like a sea slug or a flatworm with an underside of many short, squirmy tentacles and a blind, mindless looking humanoid portion with another set of eye-socket-tentacles.

In the upper right is a double-faced creature, its more human face looking swollen and pained while its more monstrous one just has a comical, skeevy smile!

Another with very different expressions on its multiple faces; the upper one looks menacing, but still kind of concerned. The hammer-head eyes just look kind of cute, and then the head inside the mouth looks like it's trying to appear friendly.

UN.PLEASANT. This monster's caterpillar-like body should make it kind of cute, but then its human head looks incredibly pained and its monster face has a mouth like...well, you can see it.

We can't see the human elements of this one, but the big, yawning, toothless, funnel-like mouth on a piglike body is a delightfully freaky sight!

Another with no apparent face; just a spiny, trumpet-shaped worm with a couple of muscly legs and a veiny "tongue" that protrudes mostly unwholesomely from directly between those legs.

Another wildly distressing one. The combination of its pugnacious, snarling beast-mouth and the phallic Eraserhead Baby on top evens out to something that you know has absolutely nothing good in store for anybody.

This one is easy to miss, and all we can see is a charming stalk-eye peeking out of a huge, upturned human face. It really gives me an impression like the eyeball is the monster's "head" and the human portion more like a "shell!"

We're gonna leave off on this once more, and come back just a third time before Halloween!