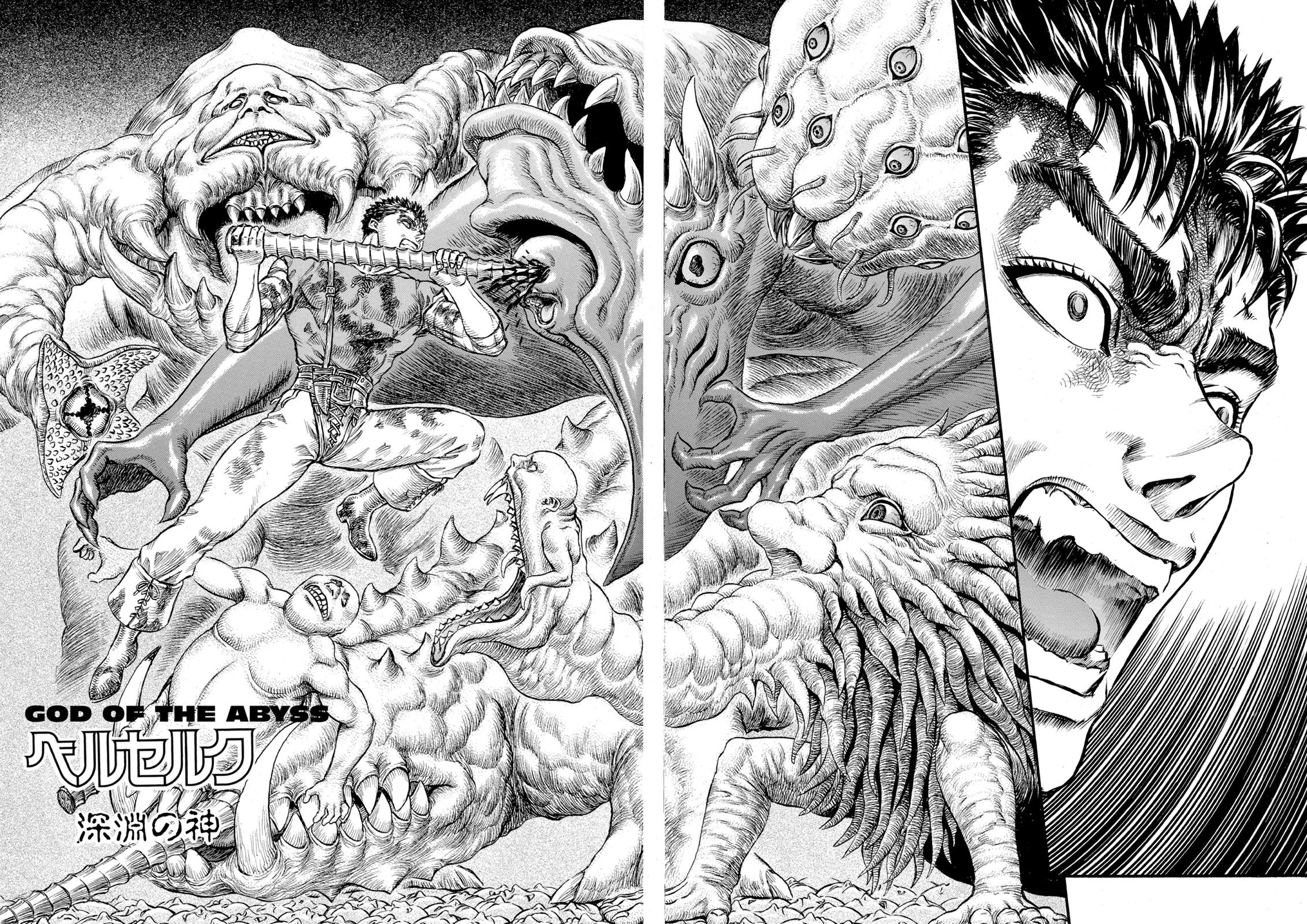 Welcome back to The Eclipse! It's the third and final in this trilogy of creature reviews, bringing us to the end of Berserk's most famous and story-relevant monsterfest, and first up, we've got this opening shot of Guts going to town on some particularly large apostles. We've got another one with star-shaped hands, but instead of eyeballs, these contain echinoderm-lie mouths. In fact, they're pretty much just starfish for hands, on a monster whose torso is also sort of like a crab's mouth if it were made of only vertebrate jaws and teeth.

Far below is the weirdo whose tusk Guts rips off to use as a weapon, tstabbing a freaky looking thing with another human face below the maw, and then there's that totally creepy bastard whose "mouth" is an entire snake-baby on an intestine-like neck, and sthe torso body is also kind of like a giant old man head with tentacle whiskers. 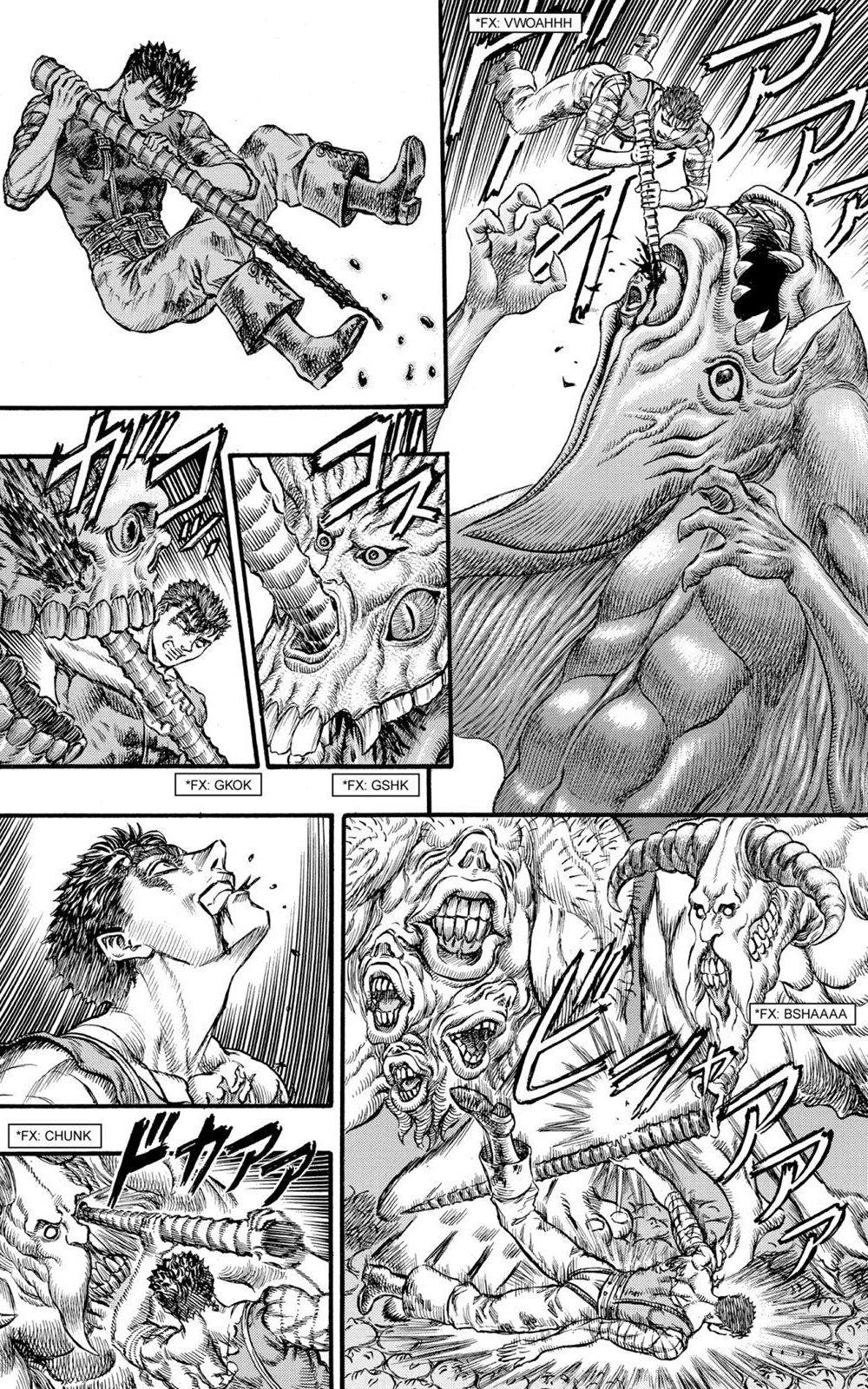 We get more of the thing Guts is stabbing, and now we can see that it has a ray-like body. In the bottom right panel we've got a good look at two real weirdos, and I have to say the one with multiple mouths and noses is amazingly unpleasant, especially the body hairs and the tuft of tentacles right between its legs. The one on the right seems an almost conventional demon beast with a big animal maw, but it also seems to have a little tubular trunk-mouth sprouting out of its chin. What's that even for?! 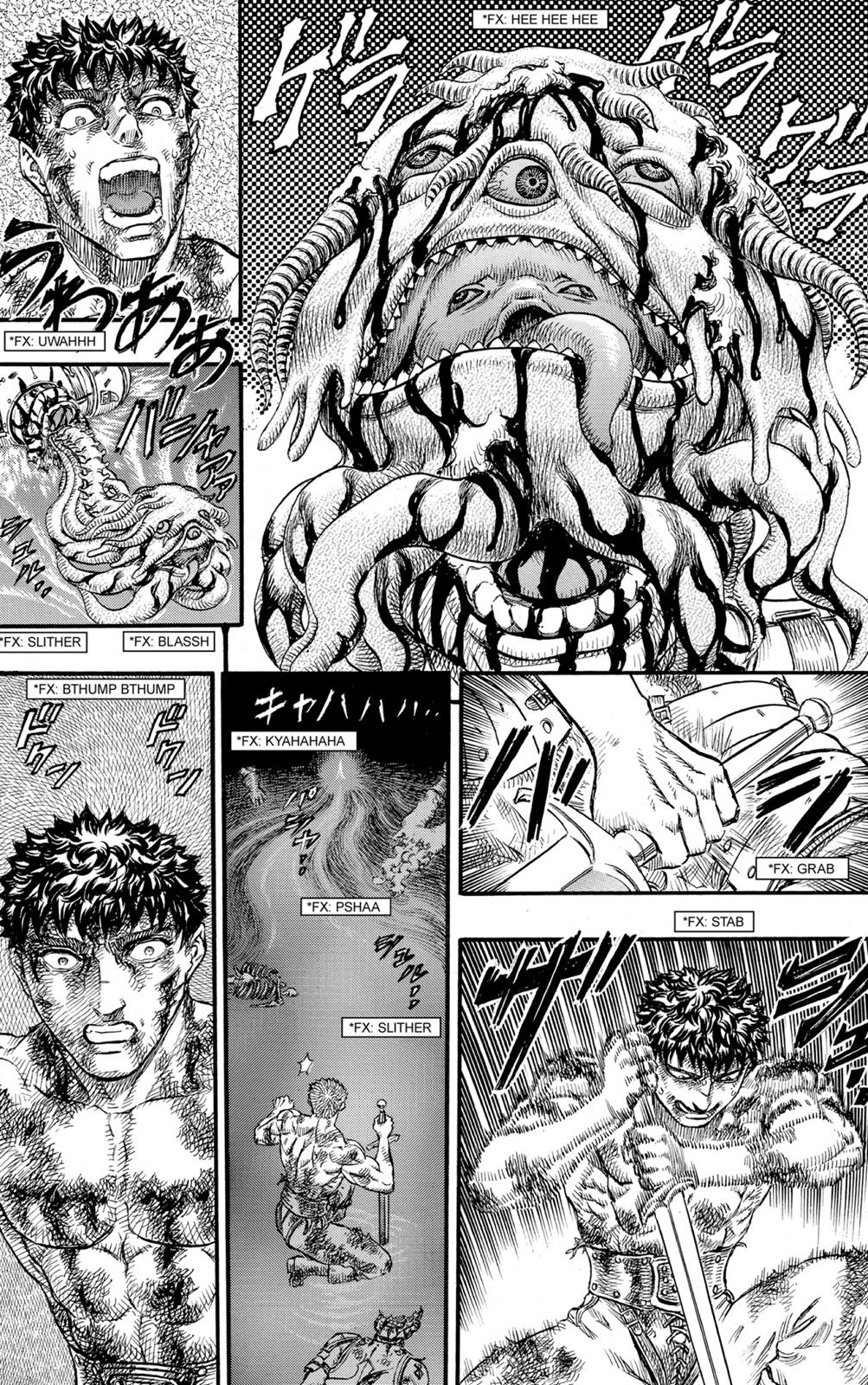 On this page, Guts has found what he thinks is a fellow survivor, only for their face to swell up and their whole head to burst! What emerges is a very strange looking, tentacled little creature with a trailing spinal column and an almost baby-like face in its mouth, which giggles as it slithers away! 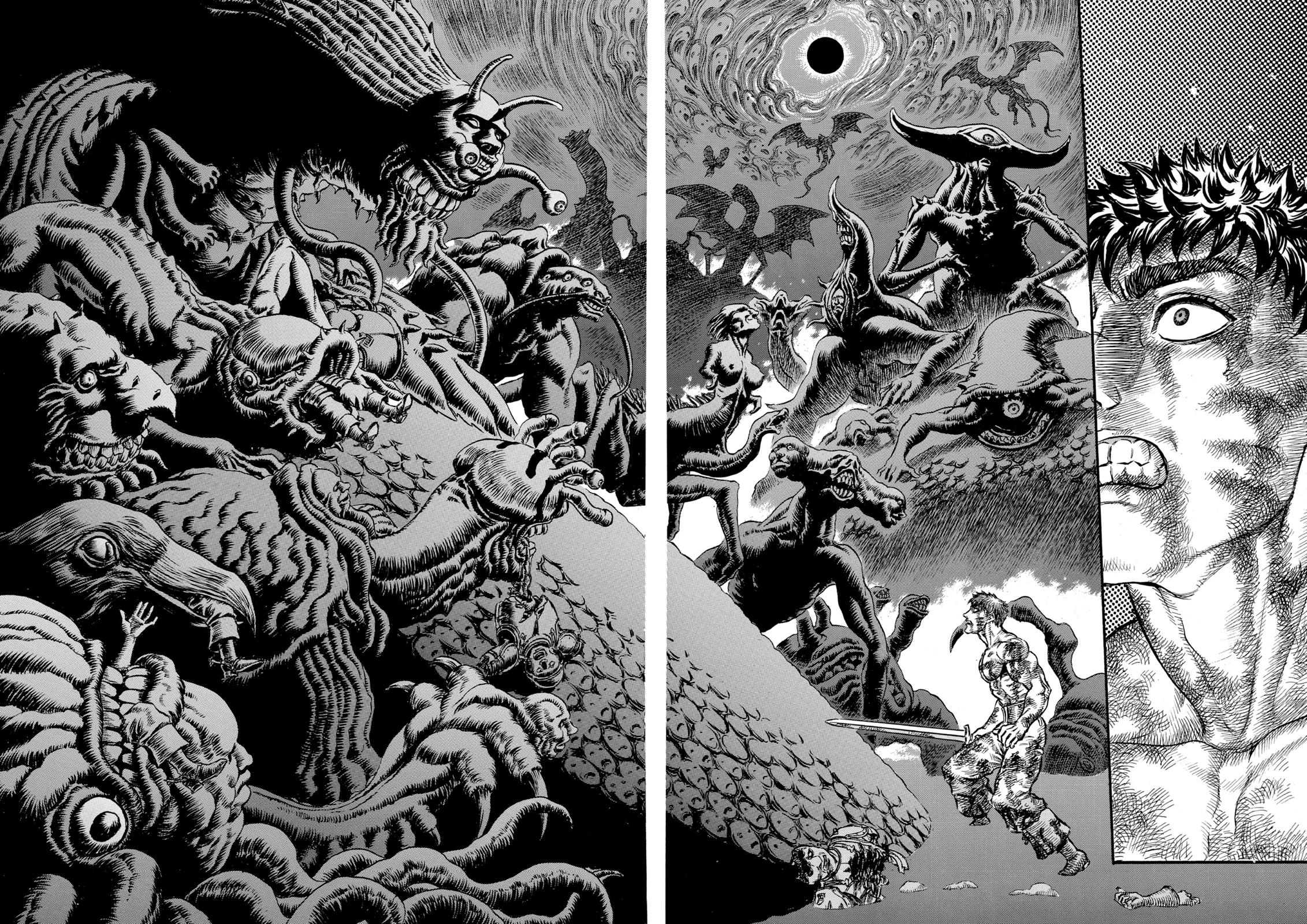 NICE shot here with a whole lot to look at, but we'll just zero in on my favorites again:

I think of this monster as "the swallower" the moment I look at it, even if we've seen a lot of other monsters that just swallow prey whole. I guess the gaping, toothless fish-mouth of this one just looks especially unpleasant and reads more than usual as a creature evolved for gulping things down.

A lot of personality in this one, its long, six-eyed head and chitinous antennae-stache calling to mind some kind of lobster or prawn person.

This one...ain't pleasant. Let's leave it at that.

I like how this one's just a straight-up bird. nothing weird other than the fact that it's a very big corvid and eating a guy.

Another tube-creature with limbs sticking out, but this one's also got teeth, and a nice little eyeball.

Finally on this page I really like this many-mouth creature. The big, humped body reminds me of a turtle shell, but it's also just another mouth! It's like a beholder of mouths instead of eyes. A... bebiter? 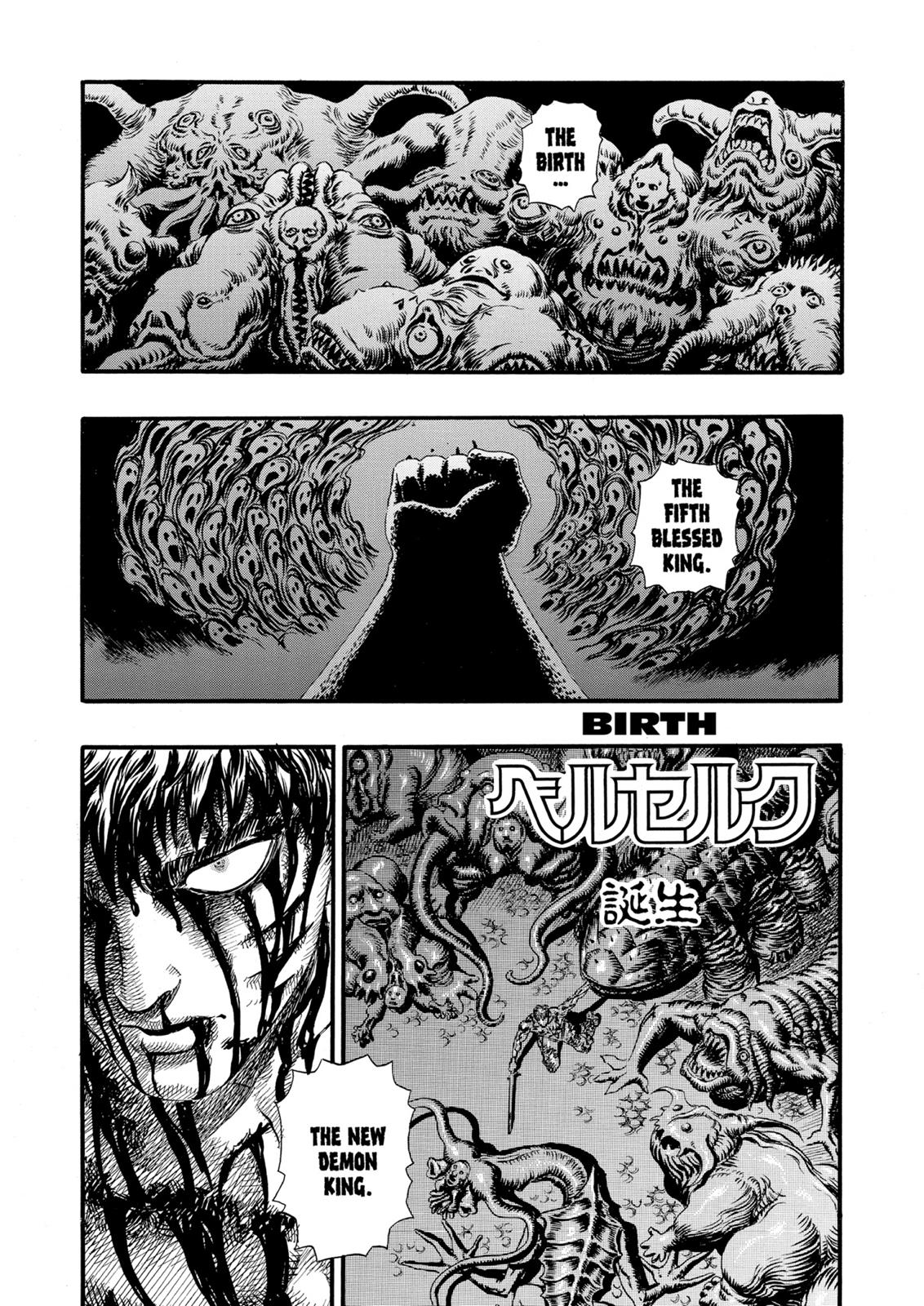 It's at this point that the character Griffith is beginning to transform into that fifth Apostle, inside of a gigantic fist. Class.

So, this one's kinda cute, isn't it? Those little beady eyes above that silly little mouth? It's not just me?

I actually can't tell if this one has a human face and arms protruding naturally from its weird, split worm-jaws or it's still in the process of eating somebody.

This is a really interesting one, with its long fleshy feeler-horns and tentacle-cluster mouth. It also has those interesting, fat tubes that look like its true eyes at first glance.

Interesting mouth on this one, with the human face actually dividing the mouth into two! You may also miss that this monster has a couple of big, fat baby faces where it ought to have arms.

Another one with a sorrowful sort of look in its eyes. It also has quite the spread of facial tentacles!

A real nasty one! The frightened little eyeball looks pretty Freudian between its two bulbous mouths, but the little face on the back couldn't care less! 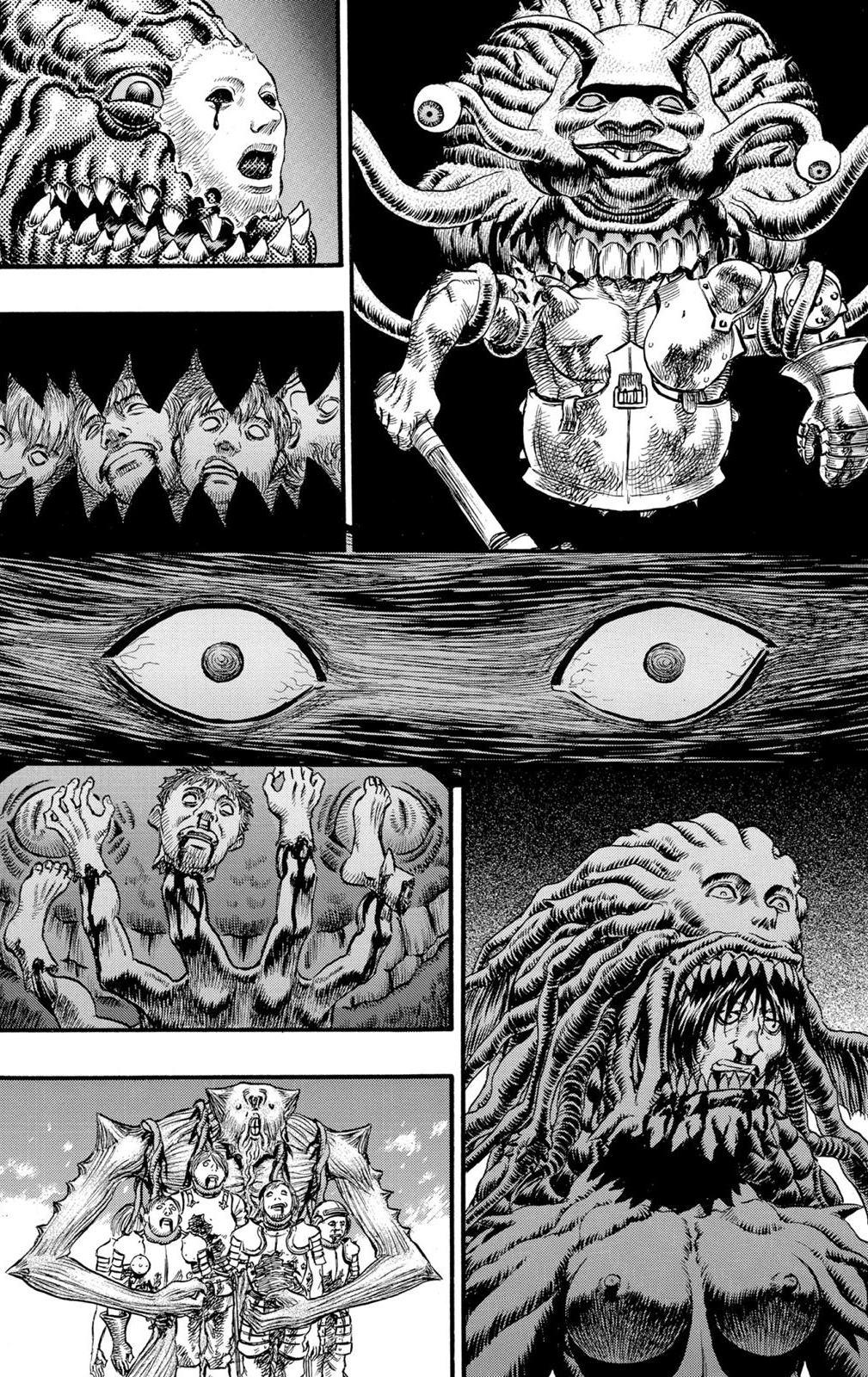 Some quick shots of the aftermath of the mass slaughter, a lot of interesting monsters here. and some we've seen before. One seems to be having a lot of fun with those severed body parts, and the last one (bottom left) just seems really proud of its little collection. It's an interesting creature in general with its almost wood-like texture 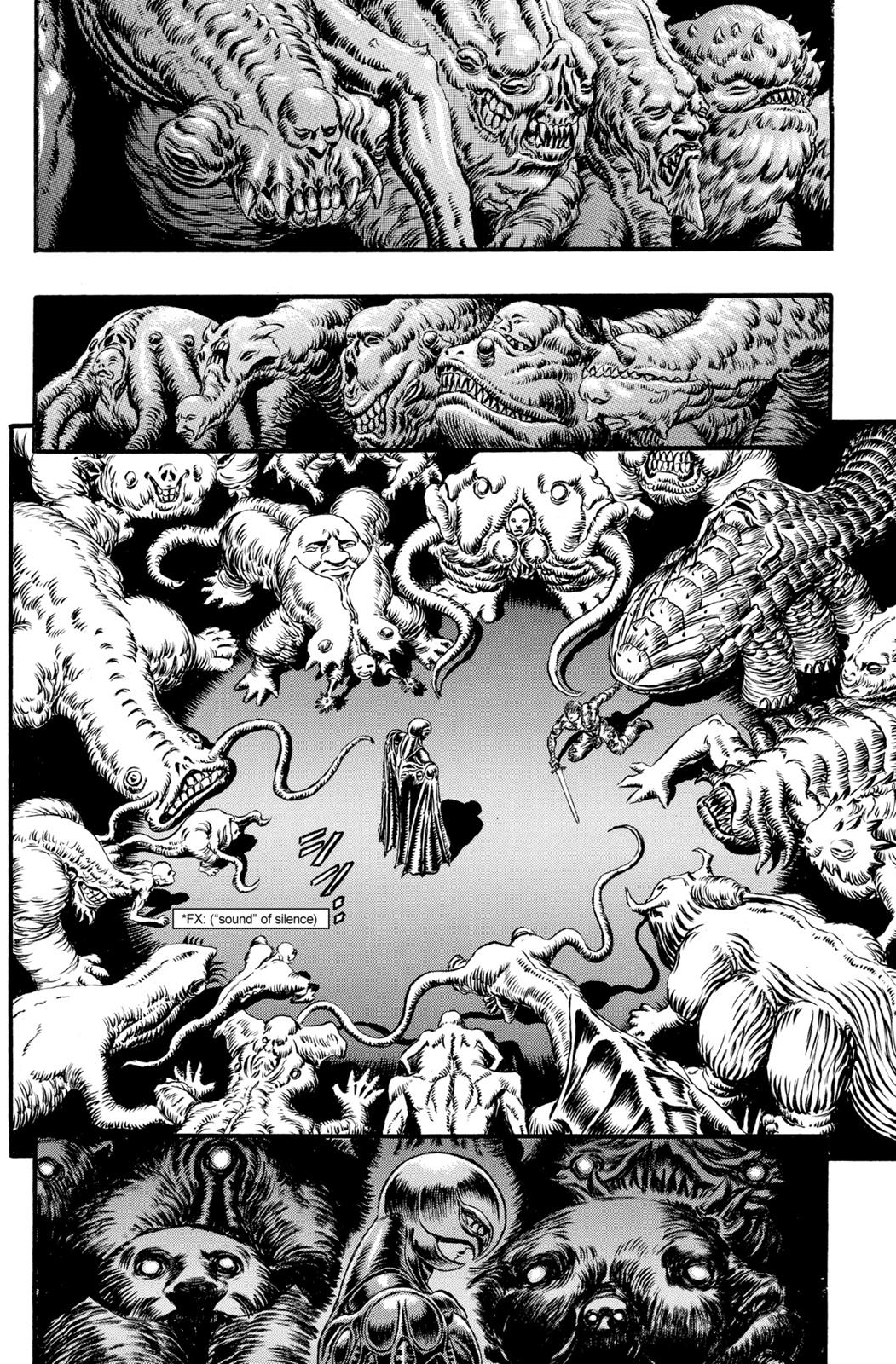 At this point, Guts is finally slowing down, and that big-mouthed, thickly armored thing gets him in an inescapable grip. Those shots of the different, weird apostles bowing for their new leader are beautifully drawn and atmospheric, aren't they?

So, I guess that thing up there DID naturally have a little person face, but it didn't have humanoid arms at all! Just whatever those weird, spiny feeler thingies are.

This comical-but-creepy one is kind of like a smiling piggy, and even has little floppy piggy ears! Terrible!!! Both its creepiness and cuteness stem from how its eyes are level with its nose as well as the corners of its mouth; place them any higher and you have a much more conventional look.

This one has always stuck out to me as pretty creepy, a humanoid figure with protruding breasts between two swollen faces, long tongues lolling from their puffy lips. It's altogether really...icky.

Another monster on the smaller, more pitiful side, and another kind of "boschian" one. Such a wretched, waddling thing!

This is a really good one, too, like a broad and flattened salamander! Really looks like it just kind of slinks around and vacuums people up, doesn't it.

one more of the crawling, teardrop-shaped variety. Miura really likes designing this shape and placing a face or other appendages right where they'd make it look like a slithering crotch-monster.

More shots of several of the above monsters here, and Guts is pretty much beaten here, right?

Pretty much, yes, but not before he hacks off his own arm to get out of those jaws. How about that guy on the left, though? With that happy little frog-man on top? Its larger, lower arms are also protruding rather interestingly from a pair of those tube-mouths we've seen so many times. The thing to the right, with its bac turned to us, also has some very interesting textures going on.

This is that point at which Griffith/Femto begins to do something horrible, while Guts is forced to watch. It's a scene that some feel is exploitative, bordering on an excuse to basically thrust some violent hentai into the narrative and sexist in a number of ways as well, while others feel that the scene is purely harrowing, frightening and dramatic, with an emotionally powerful purpose in the story and a real relevance to every character involved. I don't personally feel that either take is the right one or the wrong one. I will say that I think it works better the way it was trimmed down in the original anime adaptation.