It's been THREE YEARS since I last reviewed any of the Bethany Lowe Halloween catalog, the very Halloween that I first moved to the Pacific Northwest! Not much has been added to it since that I felt was article-worthy, but now in 2019, there's at least a handful of pretty rad new additions! Rad new additions that, unfortunately, I still can't justify ever purchasing for prices that range between fifty and several hundred dollars, but I can sure enjoy gawking at them!

This collection includes two new carnivorous plants! The "Prickly Pumpkin Plant" is a cute idea, but it doesn't look all that prickly, and the mouth feels a little too simplistic to me. This may only be because the "Frog Fern" looks so spectacular in comparison, with its beautifully sculpted tree frog eyes and toothy underbite! Frogs shouldn't have teeth, no, but obviously a Frog Fern has teeth. Don't you know your Parabotany?!

Oh, thank goodness someone else imitated the poisoned apple from Disney's Snow White. It's always been a killer design, but I was getting worried we would only ever see skull-slime-dripping apples in a Disney context. I guess it must not be as copyrighted an image as I would have guessed, and the ones being peddled here are honestly much nicer looking than any of the mouse's merchandising. I can't even pick a favorite, but I guess I'd have to just go with the classic green slime on red fruit.

If a couple more companies ever copy this imagery we could even do a Halloween Bestiary out of it.

I wish the catalog was in at least slightly higher resolution, so we could get a better look at the vintage Halloween greeting cards these entities inexplicably possess as torsos. Besides the absurd novelty of that, I'm really loving the scooped-out, sorrowful black eye sockets of the skleton, pumpkin and ghost characters. The Caterwaul sticks out like a sore thumb with its perfectly normal eyeballs, but that just makes me think it's the ringleader of the gang. The others call him Old Eyehavin' Tom, or something like that, I'm sure, and he ends all of his sentences with "...SEE??" like an old gangster, because he's the boss but also because of the eye having.

Always a fan of skeletons with one eyeball, and this one is also a wand! A wand that's also a tiny skull with a top hat and a bow tie! You just know it cracks all kinds of terrible jokes, mostly bad puns, depending on whatever spells you're casting with it. In fact, maybe the puns ARE the spells.

We've all seen a lot of spooky, haunted books, but this is an especially novel design. I love the rotten face formed all the way through the pages, which the book's actual text also appears to have been written around, so I guess the face must have been there first! I also like the goblin hands that seem to be sprouting not from the book, but from the surrounding surface, which gives me the cool impression that it just sort of conjures or manifests arms and hands from whatever it's sitting on at the time. You gotta put it on a proper desk to really wake it up!

These are apparently two pumpkin pals who I guess hang out together or they wouldn't have thematic names. They're wildly different beings, though, Mash being your more typical "pumpkin with a face," even if it is a quite delightful face, while Monster totally steals the show with their gigantic, blocky human teeth and eyeballs inside their pumpkin body. I love that! I love that it probably walks around looking eyeless but opens its head up to look around with its pumpkin guts. Why didn't I think of that. Why didn't anybody at all think of that, for that matter, before now?!

Last but not least is a figure that ought to go with Monster and Mash, but actually belongs to the "Witch Conservatory" set. It's a pumpkin with spider legs and they're made of finger bones, so that's three great things already, but it's also one of those weird pumpkins with the little pumpkin butt on it, which looks like a goofy hairdo here, and I'm a pretty big fan of that. I also really love the prickly vine "mask" around its eyes and the simple, wide gash of a mouth. The overall froggy wideness of its face is just very good. Pumpkin Skelly Spider has so much going on and so much personality! 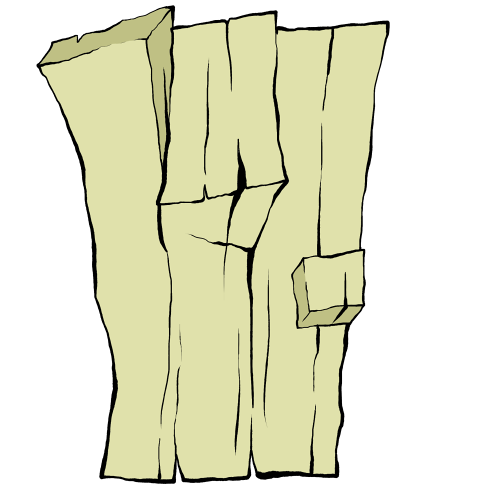