I reviewed favorite demons from the latest Devil May Cry earlier this season, but its immediate predecessor has some top-notch designs as well, even if its bestiary is far, far smaller. Quality over quantity! 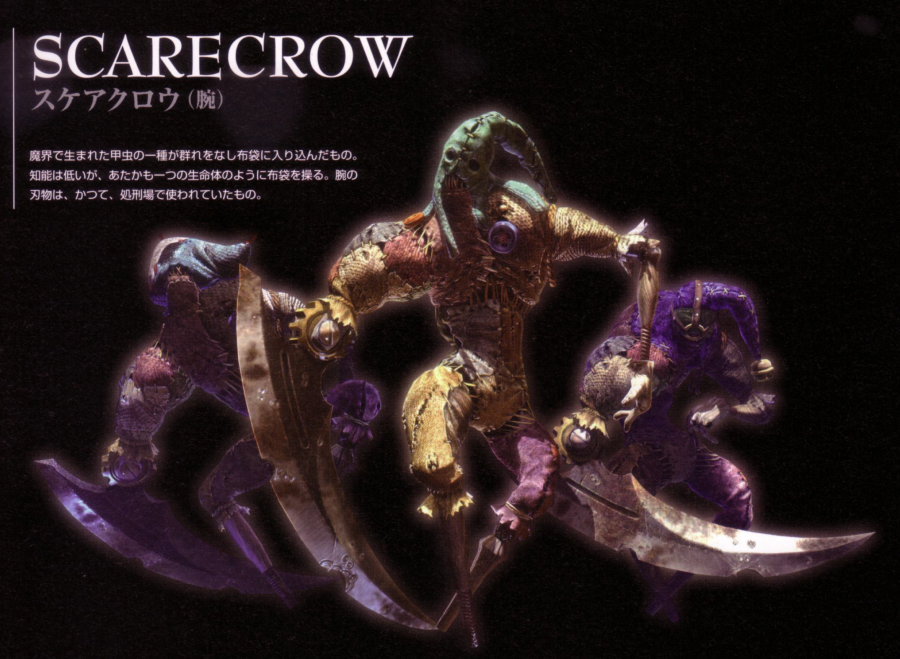 Right off the bat, the game's Least of Mooks are pure gold; freaky, burlap humanoids with various blades, sickles and sometimes creepy masks attached...but they're actually nothing but swarms of demonic beetles called Trypoxylus. This is a real-life taxon of rhinoceros beetle, but here they're just scurrying, tiny scarab-like creatures. 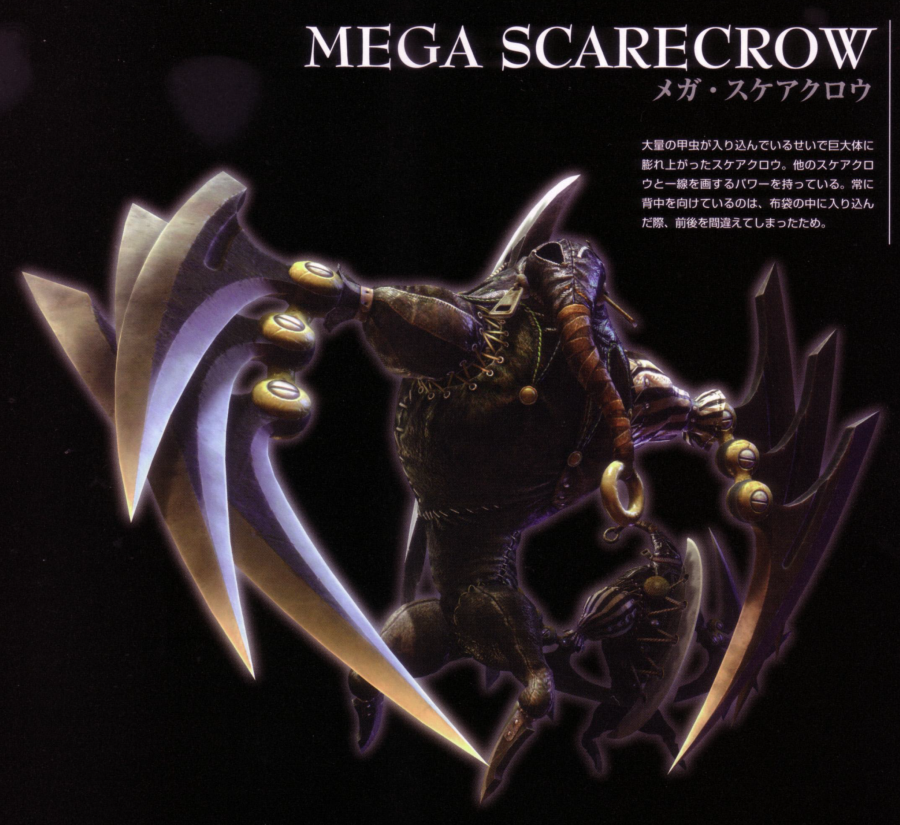 There's also a giant-sized scarecrow, and I'm loving how weird every part of this thing is. It has what's kinda a humanoid torso, but the arms are these segmented, crescent blades and the head is a long, leather tassle that dangles like some kind of weird trunk. Despite looking like some huge, plodding bruiser, this is a monster that rolls up like a bladed wheel and whirls around madly! 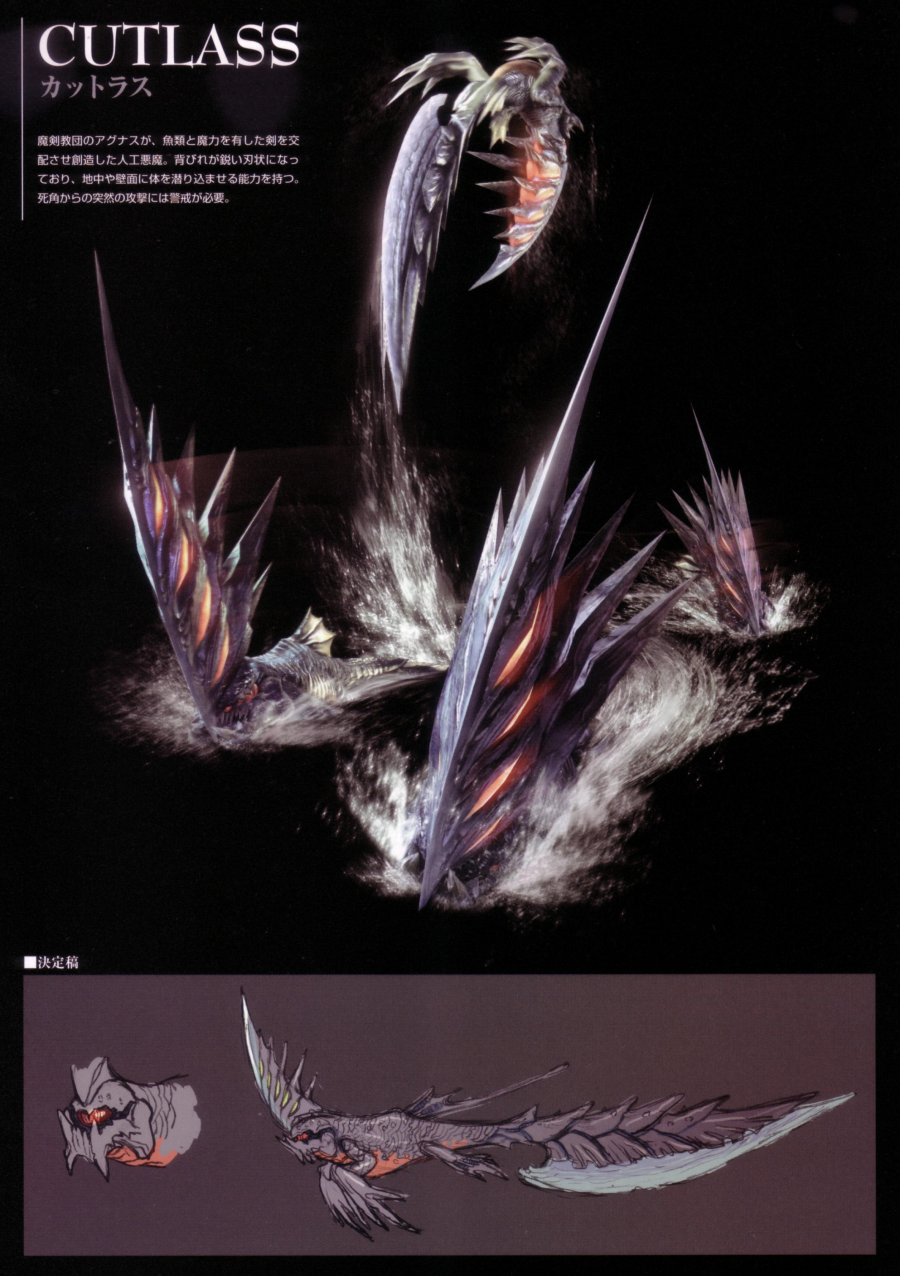 The first demon we're going to look at is the Cutlass, which was created by, and I quote, "magically cross breeding a sword with a fish." Why the term "cross-breeding" specifically? I guess it's magic. Whatever. The important thing is that it's a giant, burrowing land fish, one of my favorite tropes out there. Anything that acts like a shark but in the dirt is a fun time, and this thing has such a unique look to it! I love the giant head-blade lined with lights that look like thin, menacing eyes, and maybe they are, but the mouth also has a big, glowing reptilian eyeball inside anyway. This gives the mouth the impression of a visor, and the whole head the feeling of a monstrous knight helmet, all extremely cool and thematic to a literal sword-fish. 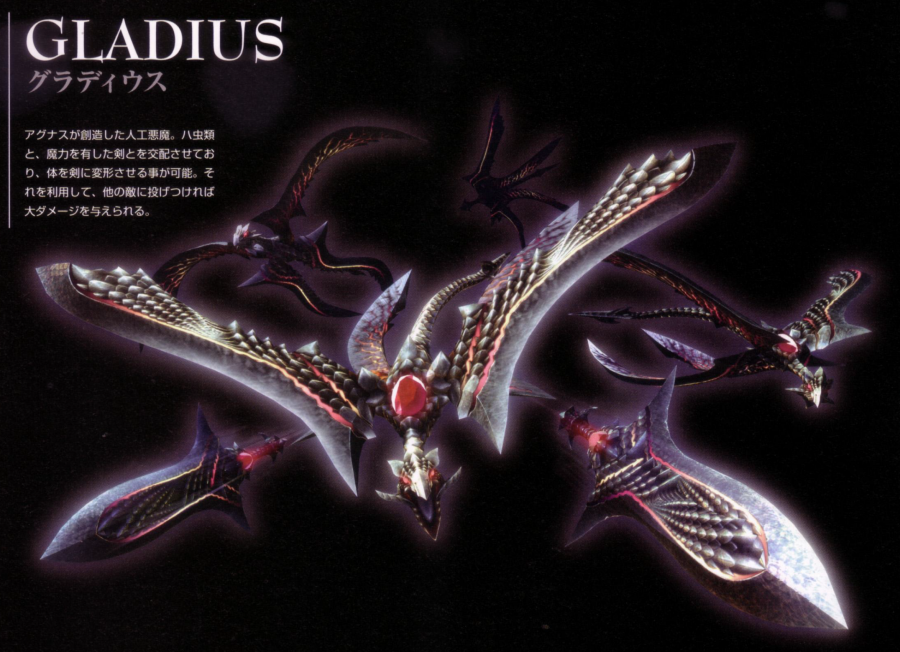 Another weapon-animal hybrid is a sword crossed with a "reptile." Looks more avian to me, but birds are basically reptiles anyway. I guess maybe they were thinking pterosaur, or dragon lizard. Whatever it used to be, this screaming sky monster, as you can see, can fold up into an actual giant sword, which larger demons can even wield as such. I like how "pretty" of a sword it is, too, with the ornate, colorful scales and single gem, so it's the sword monster version of some tropical rainforest creature with attractive plumage. 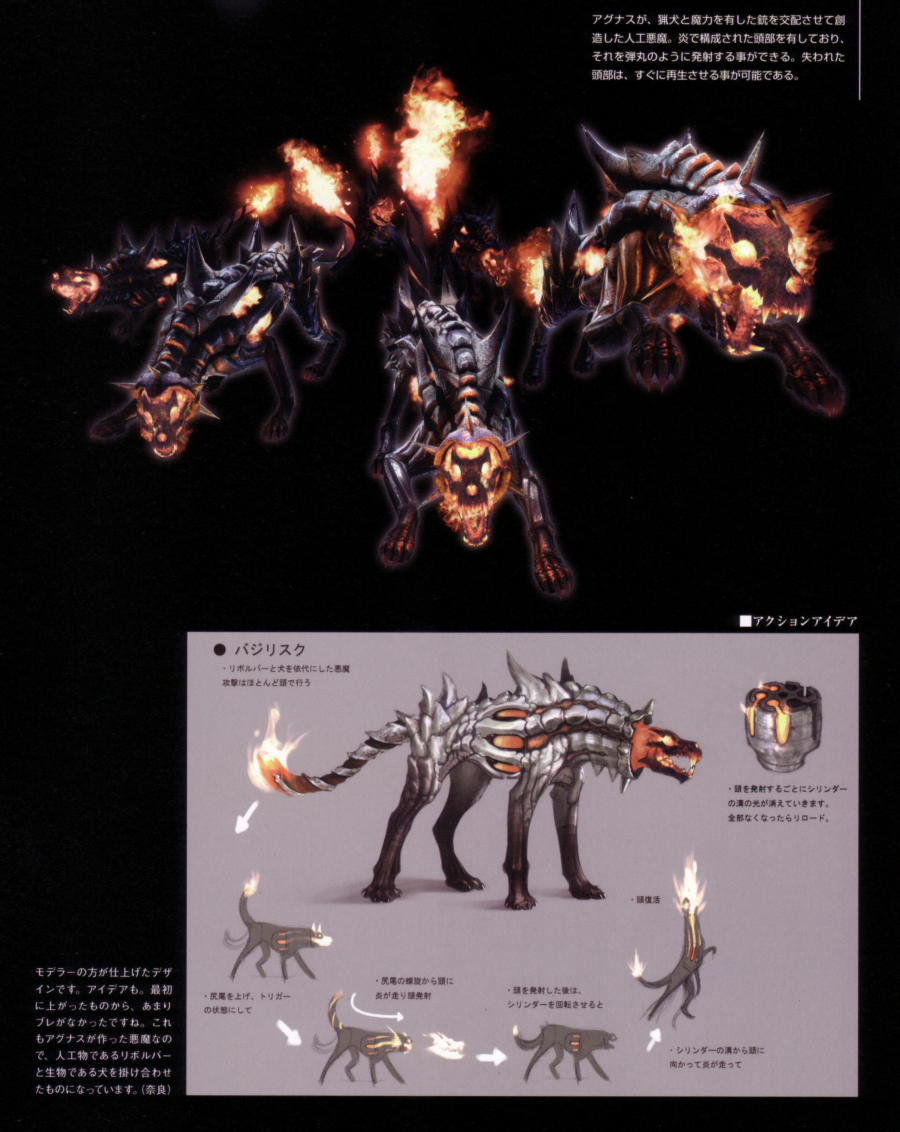 At first glance, I thought these were kind of generic, flaming demon dogs, but it turns out they're the third in a trio with our previous two monsters. These are dogs hybridized with handguns, which you can subtly see in their corkscrew tails, chests like a six shooter cylinder and tubular barrel necks. Their heads shoot off. Their ENTIRE heads. How is that both the funniest and most badass thing I've ever heard of a hellhound doing?! Once the heads are launched, new heads re-form from the liquid hellfire stored in their cylinder, as we see in their little "anatomical" notes there. Absolutely ridiculous, absolutely rad as heck. 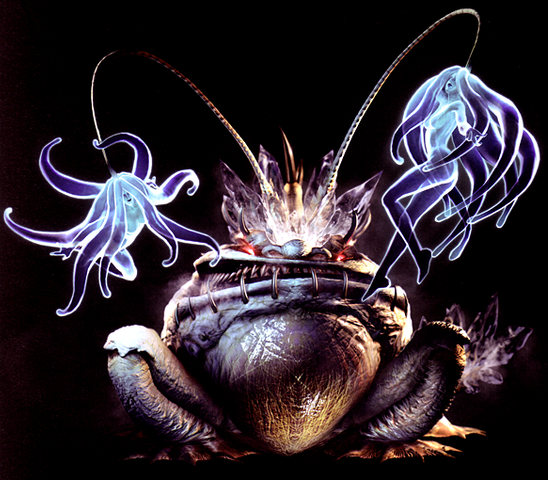 This demon also comes in a color variant called a Dagon, but both are "ice demons" resembling both toads and giant anglerfish. What's cool about them are their gelatinous, humanoid, "seductive" lures, referred to as Rusalka, which dance and twirl and giggle through the air. I've seen monsters like this elsewhere, but I like this one's lure-ladies in particular because of how well they resemble some sort of hydrozoan or pom-pom anemone at first glance, believably gelatinous and alien and not totally human. 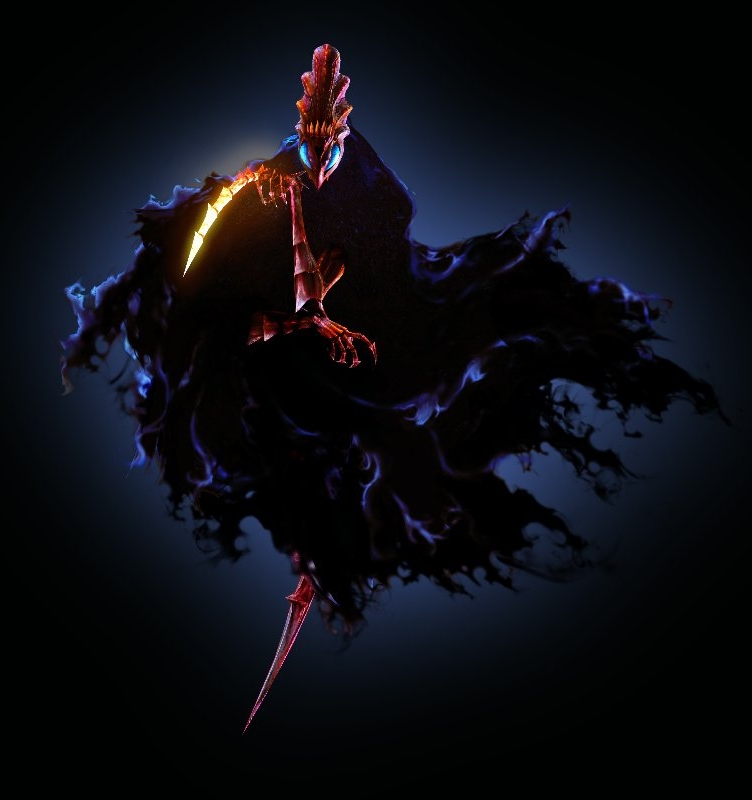 You hardly ever see the combination of a cloaked, ethereal phantasm and an insectoid, do you? This demon is giving ghostly powers by its black, shadowy robes, but when they're removed, it reveals its true form! 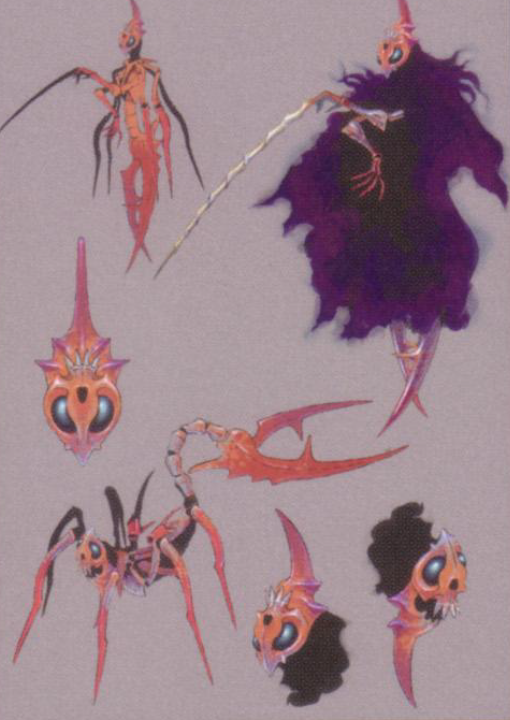 The bug under the robes has a lot of personality; the single huge pincer on the end of a spine-like tail just looks awesome, and I love how the head, once flipped around, has a less fearsome, slightly goofier personality. This is by design, as the true Mephisto is a weak and cowardly monster! 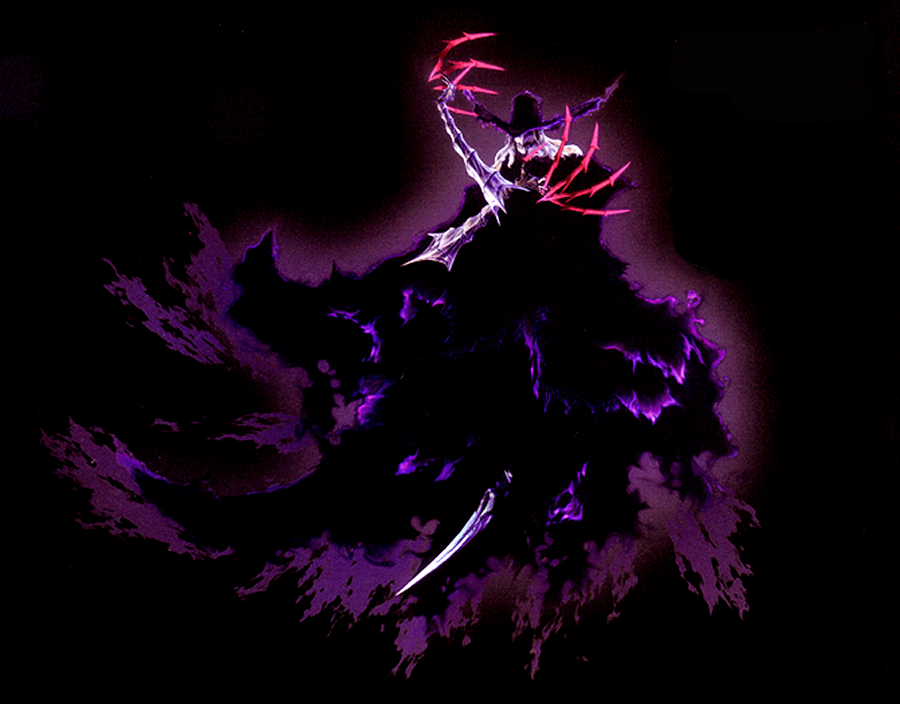 The Mephisto's larger and more powerful cousin honestly should have come first; we can tell the Mephisto is some kind of weird bug, but it's much more of a surprise here, as the Faust does a much better job of looking like a humanoid in a fancy outfit. 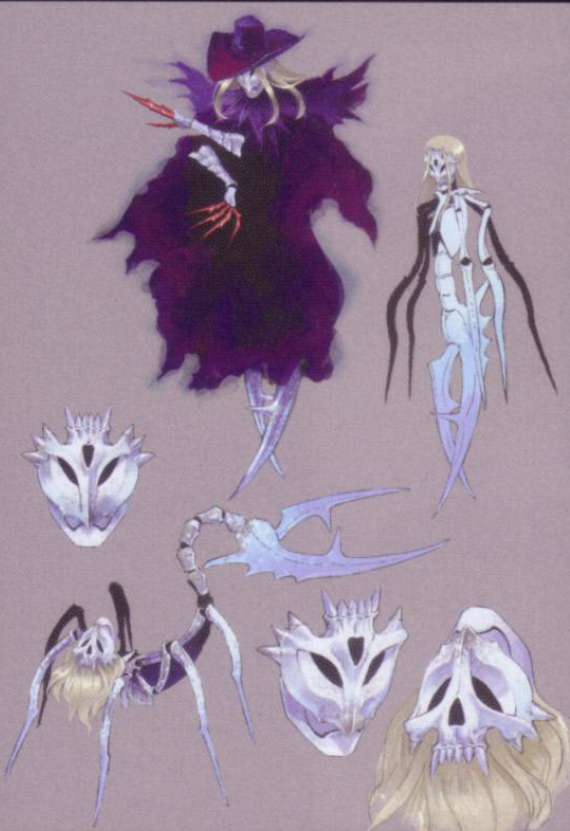 I like the Faust's true form even more than Mephisto, the skull-like face appearing even more pitiful and the flowing "hair" becoming more like a beard. It not only goes from humanoid to insectoid just by flipping over, but appears to go from young and spry to old and decrepit! 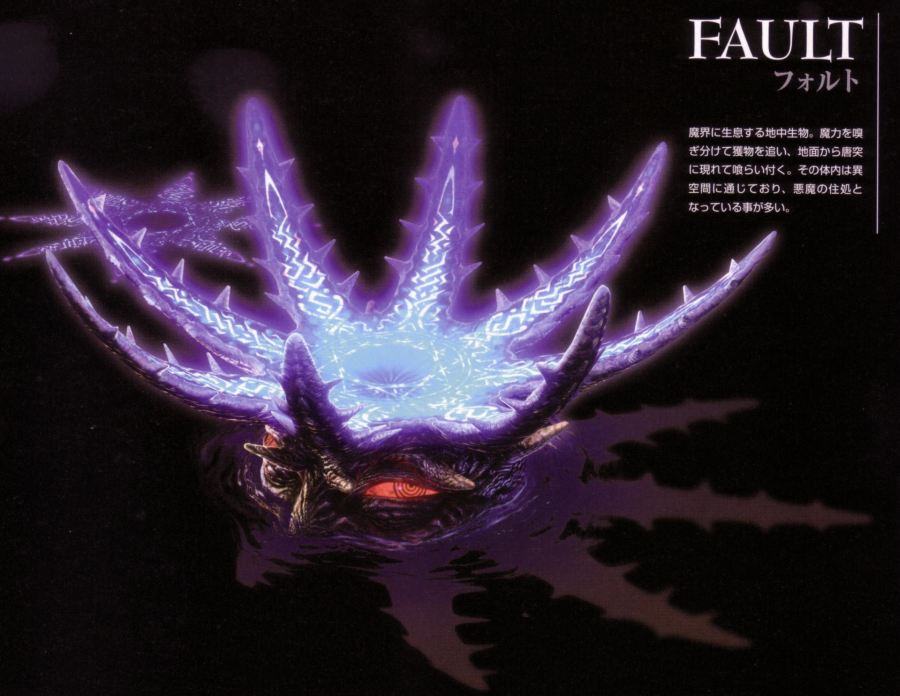 This enemy is both a demon and a sort of mobile hell-portal, rising up from the ground to swallow prey and transport them to its own pocket netherworld populated by other demons, all of which must of course be defeated in order to escape. 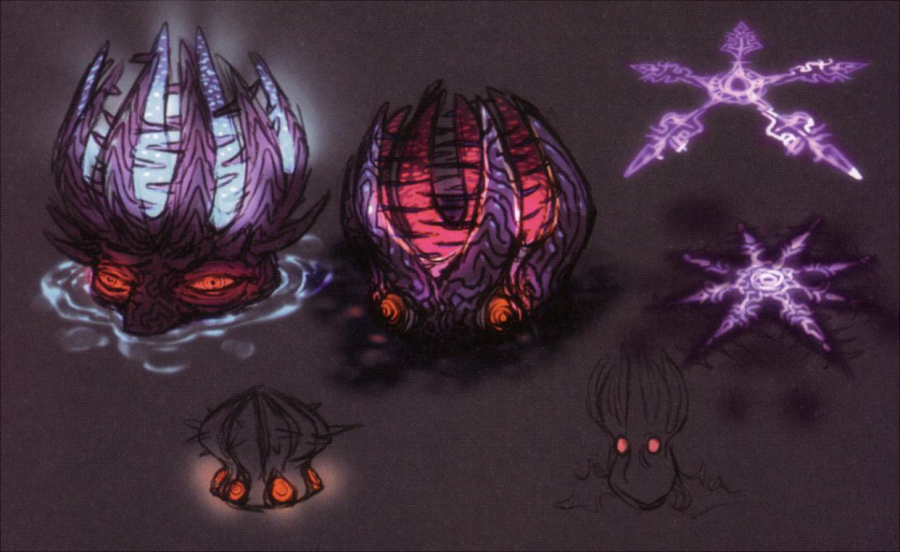 The design is fantastic, too. It's like a bioluminescent, thorny sea anemone, but the eerie eyes and start of a nose imply that it may be attached to an absolutely massive humanoid demon we never really see. I do like the concept art that makes it look more alien, too, especially the design with the freaky, rounder eyes, but as much as I love more invertebrate-like creatures, putting this wormlike maw atop a giant, subterranean blue guy is honestly more surprising and more interesting here. 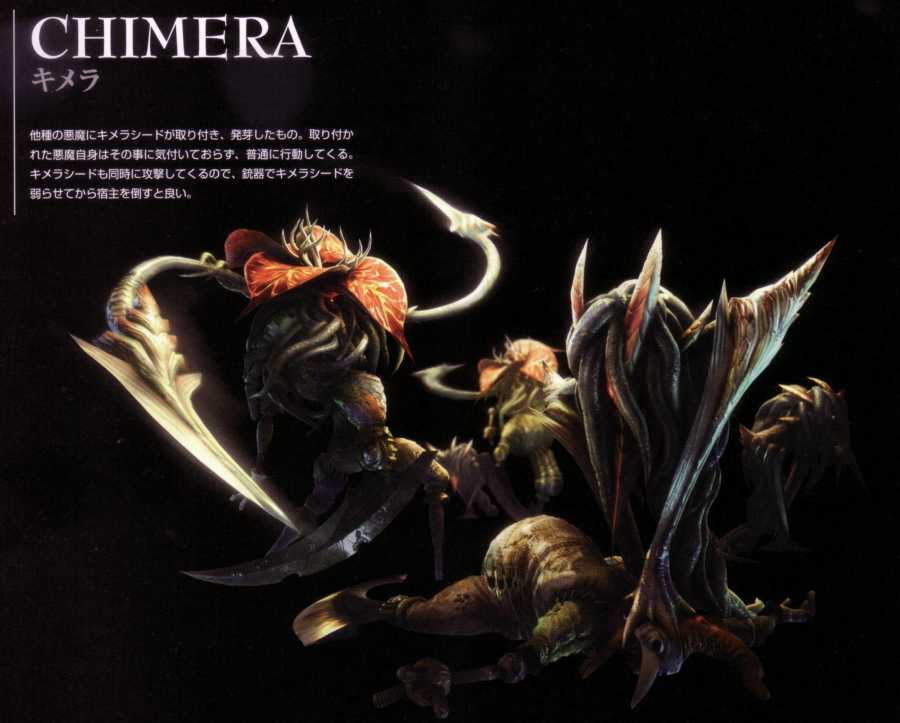 So, this one's freaking awesome. The Chimera is a plant-based parasitic demon that begins as a "seed," which is actually the thing we see on the right side; a head shrouded by drooping, hair-like black tentacles with a single pair of large, powerful, monstrous arms it also walks and leaps with.

The goal of this "seed" is to piggyback onto some other demon, even a scarecrow, at which point the seed fuses with its host, basically becomes their new head and "blooms" into a grotesque, toothy flower with bladed, flailing tentacles! Like the Plagas from Resident Evil, this really feels like another homage to the manga series Parasyte. 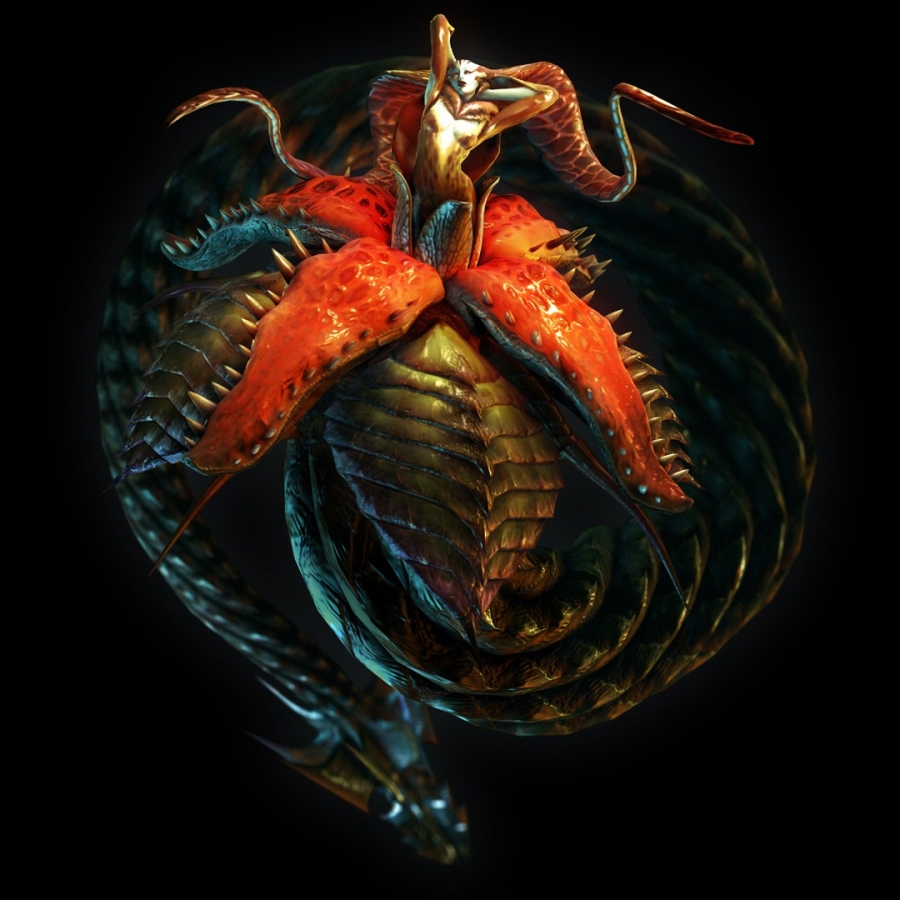 The last demon we're bothering to review here is the mother of the Chimeras, Echidna! You may recognize that is the "mother of all monsters" from Greek myth, who did indeed give birth to the Chimera among many other creatures. Her only known spawn here are those parasitic seed creatures, but their ability to merge with other demons kind of forcibly turns them into her other "children," doesn't it? Echidna's design is interesting, because at first she looks kind of like an almost generic, serpentine dragon that just happens to be made up of plant material. When the jaws open up, however, we see that a central humanoid body constitutes the dragon's "tongue," with the rest of the form now looking like some sort of giant, botanical nematode. Every single thing about this concept is cool! We're kind of our of designs I consider reviewable from this title, but like I said, quality over quantity; the third, second and first games aren't quite as interesting to me, but that just goes to show that this series has kept on ramping up its imagination!