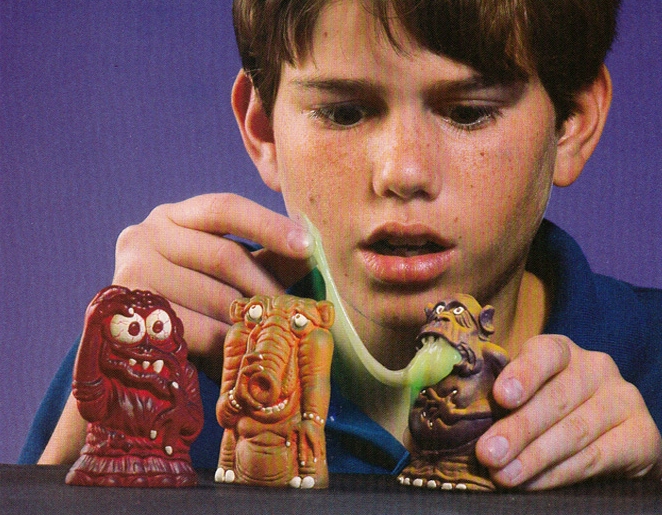 I did a pretty extensive review of 1987's Mad Scientist toy line back in 2014, which you can read here, and I'd especially love you to because most of its comments seem to have been wiped for no real reason. In said review, I discuss the fact that little four-year-old me really wanted the specific hunk of rubber on the far left of this promotional image, one of three monsters who were little more than glorified plastic bags you could fill up with slime, but that I never actually saw him on shelves before the line disappeared from stores entirely. Pretty much my only hope was for one to ever crop up on ebay at precisely the right time for me to be paying attention and have extra spending money, a combination of circumstances whose odds are never terribly high.

But in 2019, it finally happened. 32 years after four-year-old me last saw any of his brothers hanging from the pegs of K-Mart or Ames. You don't even remember Ames! Every Ames closed down before 90% of you were born! 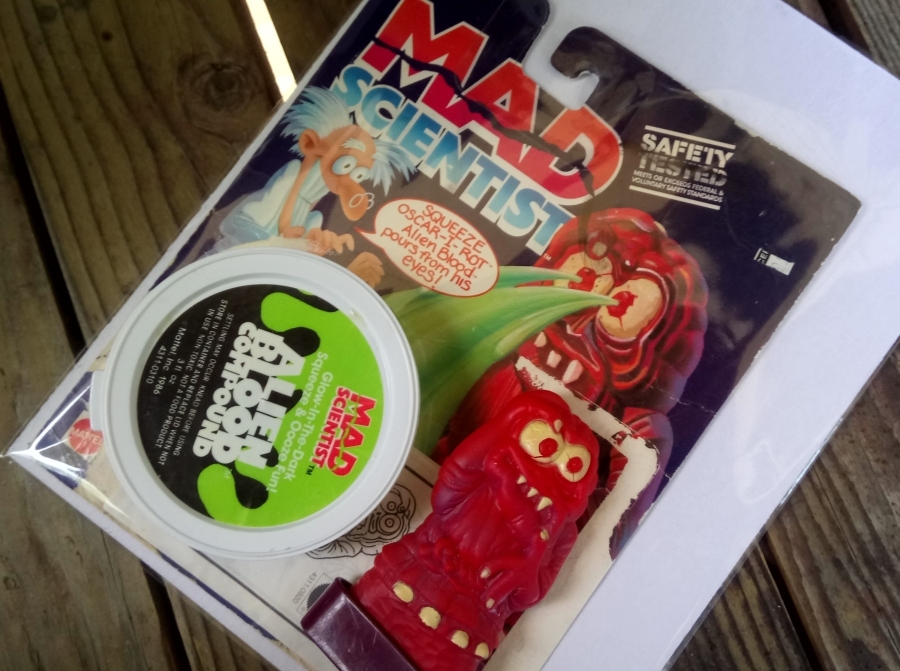 But Ames or no Ames, you can finally welcome Oscar I-Rot to Bogleech.com, whomst I feel like I can blame for at least a portion of my ongoing fixation on big-eyeballed, pathetic looking monsters. He came to me without the plastic bubble of his original packaging, so I can't do a whole "unboxing," but I don't really do those anyway. Should I do those? Are they really that popular?? They sure look like they are. You guys really want to watch my hands rip open some old toys, huh? Weird! 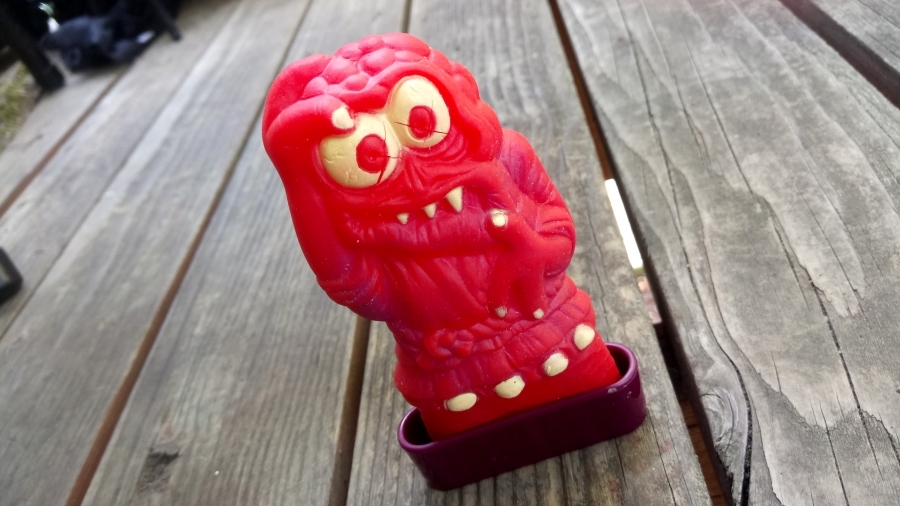 For now, we review a toy the old fashioned internet way, through ordinary static pictures and words. For a glorified plastic bag, I still find Oscar beautiful to behold. Such a pleasant candy red with a spritz of purple gradient in the mix, and a creamy off-yellow to highlight his teeth, nails and eyeballs. He also comes with a purple stand, which is also a sort of "cap" that'll be important later. Child-me actually missed the fact that he was wearing a robe that was tied around his waist, and just thought he had really wrinkly, saggy skin. I address this in my shameless ripoff of him, Gromory, which is still not enough of a ripoff for me to ever like it half as much as its inspiration here. 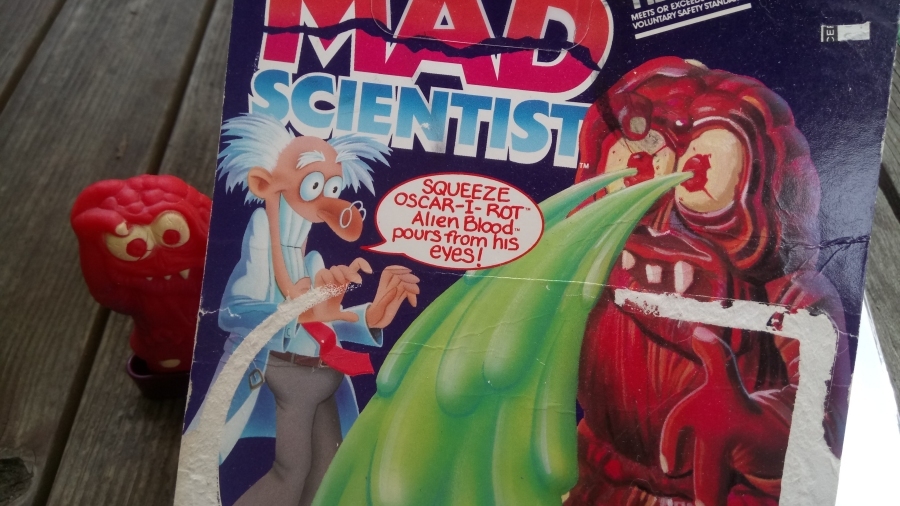 The card back has some lovely artwork on it, which I wish didn't have to be damaged to ever be opened. Actually...can you just melt the glue off of blister packages with something? Will a hair dryer do it?

The artwork emphasizes more that Oscar has what is either a very wide, thin "nose" or a very pronounced upper lip. Either way, it makes him look even more like he would speak in a Peter Lorre voice. 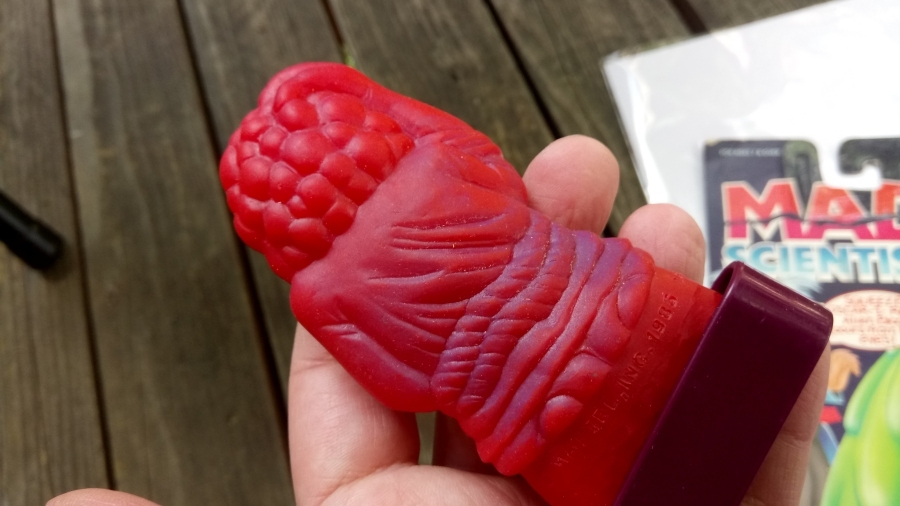 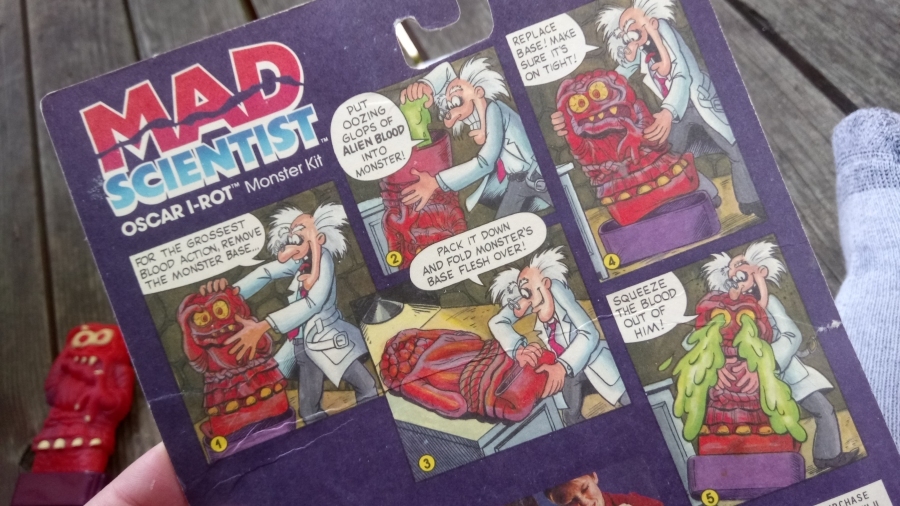 I already shared this instructional comic on my original review of this toy line, but here it is again, explaining what it is we're supposed to do here. The way the toy is portrayed so literally in this sequence really weirds me out, as if the Mad Scientist really created a "monster" that was just fleshy bag for him to fill up with goo, its limbs and other features superficially sculpted onto its outer tissues. Does this...thing...even have any sentience or biological functions at all?! Look at the Zeal on that man's face. What is the matter with this guy. 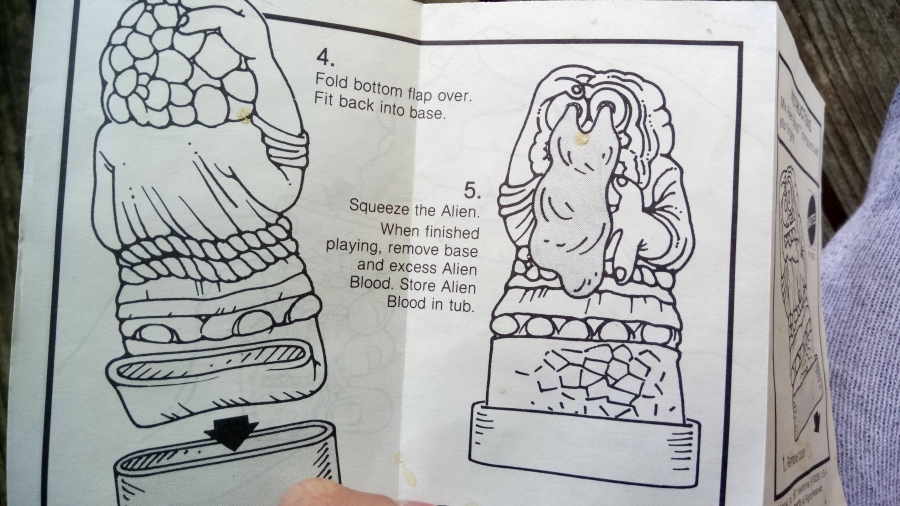 Oscar also includes a printed instruction booklet, as if the comic strip didn't make it clear enough and you couldn't possibly figure out what to do with this set of objects on your own. The booklet also calls him an "alien." He is NOT an "alien." He is a monster and only his blood is an alien! The same toy line did have a "dissect-an-alien" kit, so I think it's safe to infer that the organs and fluids of a space creature are utilized by The Scientist in the construction of his own original beings. 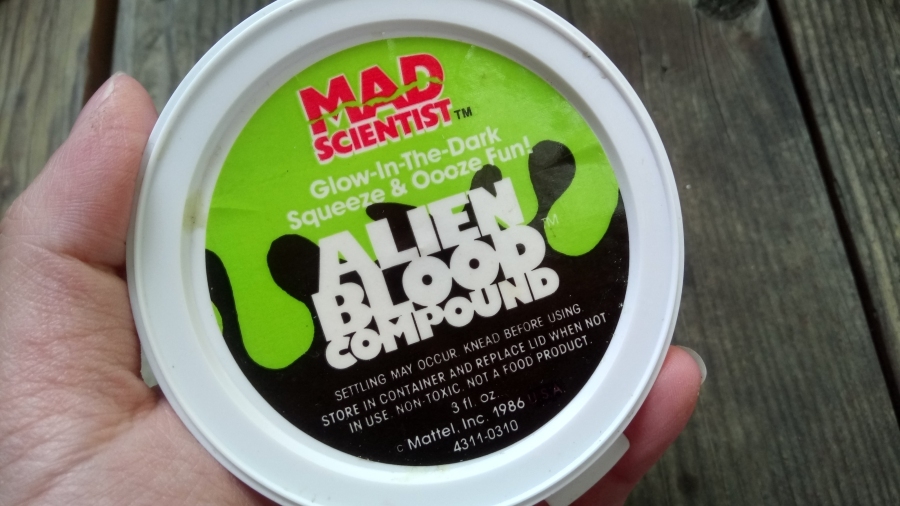 Sadly, that "alien blood" is long, long dried up and gone, which I knew it would be. It's a shame that nobody makes any slime I've seen with quite the same color and consistency that this stuff had, either; it was so gloriously translucent, phlegmy green and perfectly stretchy. It was beautiful, but I didn't appreciate it at the time, and in fact at that age I was viscerally sickened by contact with anything goopy.

My mom actually kept trying to expose me to toy slime (especially since she kept paying for things that came with it) and show me it was "harmless," possibly not quite getting that I already knew that and wasn't afraid of it; I just couldn't abide certain textures. I couldn't even stand any type of sauce, gravy, pudding, melted cheese or other semi-liquid food until my late teens. 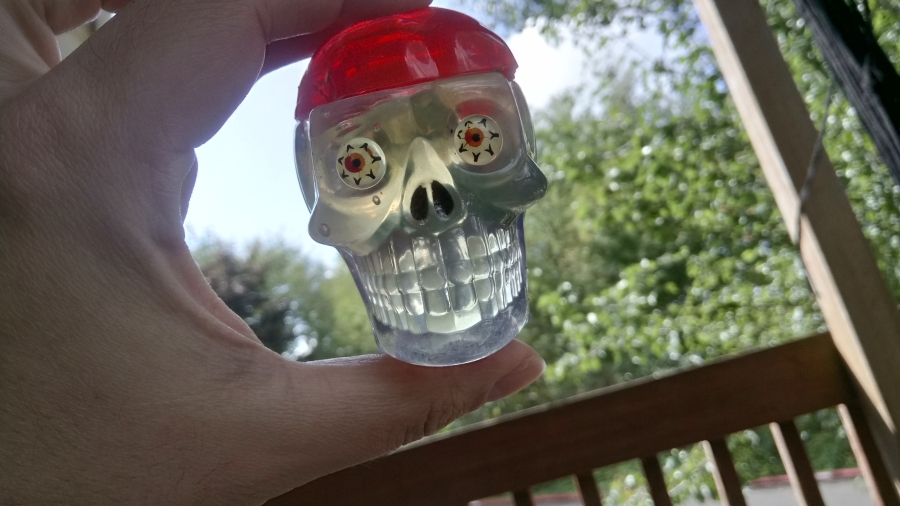 Surprisingly, I still didn't have any other kind of green or otherwise colored slime on-hand for this event, but I did have this "Skull Slime" I found only this year in Winco Foods' Halloween aisle. You don't see a lot of crystal clear slime, honestly, and I appreciate that it's the slime they thought should come in this lovely looking skull. Like it's supposed to be bone marrow or something. 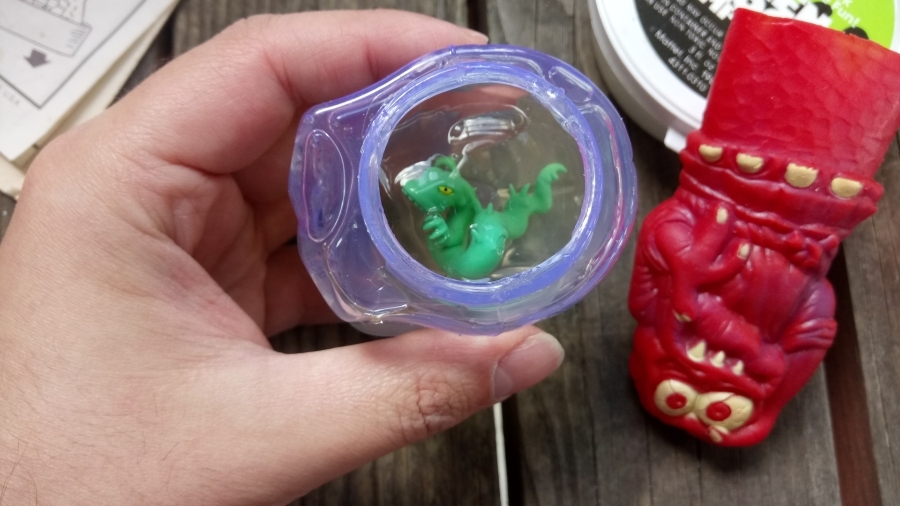 On opening the skull, I discovered I had already opened it once and that I had put Billy Terrify inside, which I guess I forgot.

What, you don't know Billy?! Oh right, because hardly anybody cared about my "Slimy Sludge" monster reviews and speculative lore. Well, I SUGGEST you EDUCATE YOURSELF. 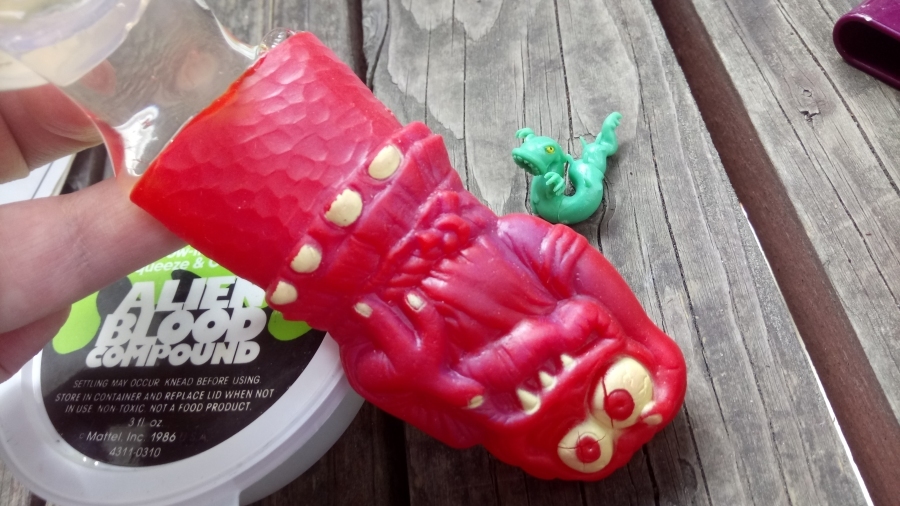 Anyway, it's time to find out if this is all it's cracked up to be, and fill Oscar's huge, enormous gaping rectal tube with the gelatinous contents of a giant skull. YES, BILLY, WE'RE HURRYING.

Next, we have to fold the tube up, stuff it into that purple cap, and give it a squeeze, a momentous occasion I'm going to immortalize with the art of film:

So, maybe clear slime was actually kind of - I SAID WE'RE DOING IT ALREADY, BILLY, PUT YOUR PANTS BACK ON - maybe clear slime was actually kind of a poor choice, since it doesn't really look like Oscar's decomposing eyeballs are gushing alien blood so much as he's just crying. Just absolutely weeping. Probably over Billy's terrible foul language. Nonetheless, you're witnessing possibly the first filmed demonstration of this specific toy ever made, since I'm pretty sure I'm the only person in the whole world to have cared at all that much about Mr. I-Rot. 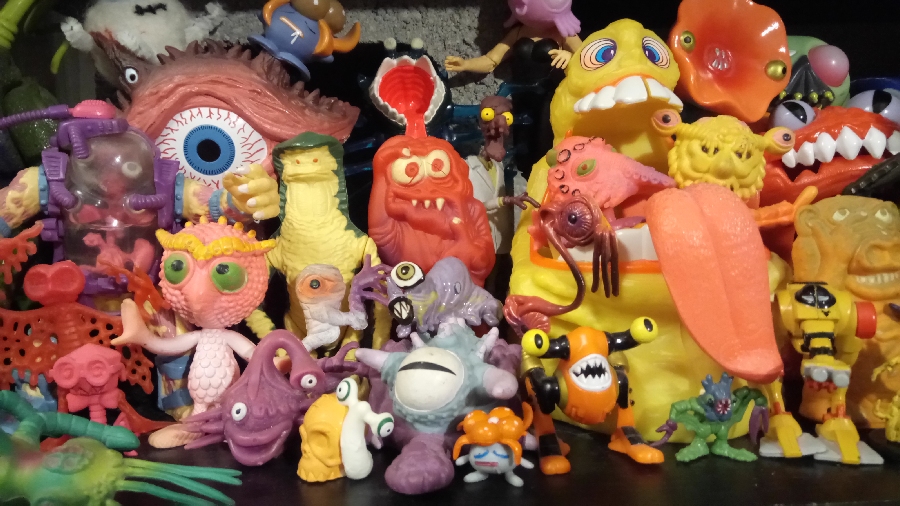 The real point of me having Oscar, however, is just to add him to the army of monsters I so carefully decorate my living space with. Contained within this view alone are most of my top ten to twenty most cherished collectibles, some of them the very same ones I had when they were still being sold brand new. He fills that particular space flawlessly, too.

Speaking of which, I'm actually still in the process of setting up all my collections in what I hope might be my longest-term home yet. How interested would anyone be if I actually made articles out of going over these displays in more detail?