I sure do a lot of advertising on here for Yo Kai Watch! I'd say Level-5 should gimme a cut, but unfortunately, their future is looking less cerain than ever. At one time called "The Pokemon Killer," sales of Yo-Kai Watch seemed to plummet once Pokemon announced its seventh generation, and continue to be low as its chief competitor gears up for its eighth. This is especially saddening because the Yo-Kai Watch games continue to be superior experiences in virtually every regard. Perhaps the only failing of the latest game, besides still being Japan-only, is that it comes packed with only about a hundred of the franchise's 700 some monsters...but unlike Pokemon Sword and Shield, it also comes with a promise from the dev team that they intend to add every last Yo-kai through DLC content, and have already released a couple of such patches at the time of this writing.

I've reviewed many favorite Yo-Kai over previous Halloweens, but as of the release of 4 and its latest DLC, I have enough new favorites for a decently sized post...and that's without even knowing anything more than their designs, for the most part! 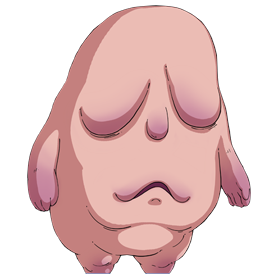 First, however, we've got one of my all-time favorite classical Youkai, here at last! A part of me would have actually liked to see this one given a more modern Yo-Kai Watch twist, but I'm glad you can finally get this little guy in a monster game. Many English websites mistake this monster's name with Nupperabo, which is in fact a completely different monster in the form of a pale, faceless human.

Nuppefuhofu is a creature described as a big, fat, blobby lump of flesh with only vague facial features and stubby appendages, almost like some barely-finished clay sculpture. It's actually said to be made of rotten flesh, with a stench to match, and often hangs out in graveyards at night. Otherwise gentle and harmless as far as anyone knows, it has more to fear from humans than the other way around, as legend has it that one can attain immortality by eating its rancid, putrid meat.

None of this is mentioned in Yo-kai Watch, but its official profile does apparently say that it "sucks oil from dead humans to store nourishment for its flesh." That's a lot more gruesome than this series is usually willing to describe! 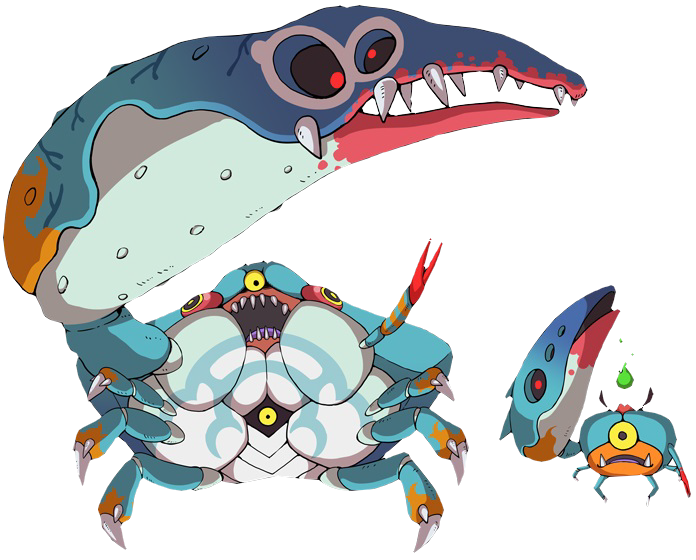 Now we're into Yo-kai so new, their official profiles aren't even known yet, so all we can discuss here is whatever we can infer from the designs! Yo-Kai Watch 4 takes place across four different worlds, one of them the "Shadowside" continuity in which most Yo-kai have both a "lighter" and "darker" form. I love that one example is a ghostly crab! Little Choky is truly adorable, while Shiomaneki is wonderfully menacing. I like the additional pair of red eyes and the second yellow eye in the middle of its underside, as well as how the larger claw looks like a monstrous face; almost like the face of a male salmon!

Shiomaneki is a pre-made pun, because it's already the Japanese word for a fiddler crab and basically means "seashore beckoner," but this can also be written as "death beckoner." 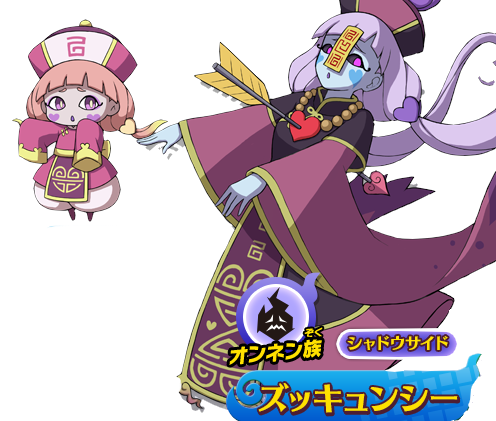 Another classic monster, but this one does have an original twist! The Jianshi or Kyonshi is a type of Chinese undead animated by one of the three facets of the human soul that has failed to pass on, and can move only by hopping about due to the effects of rigor mortis.

Yo-Kai Watch's take on the monster is instead named after the idea of your chest tightening and your heart almost stopping from overwhelming emotion. If possessed by the this Yo-kai, your heart will supposedly flutter so hard at "every action of a person you like" that it can kill you! 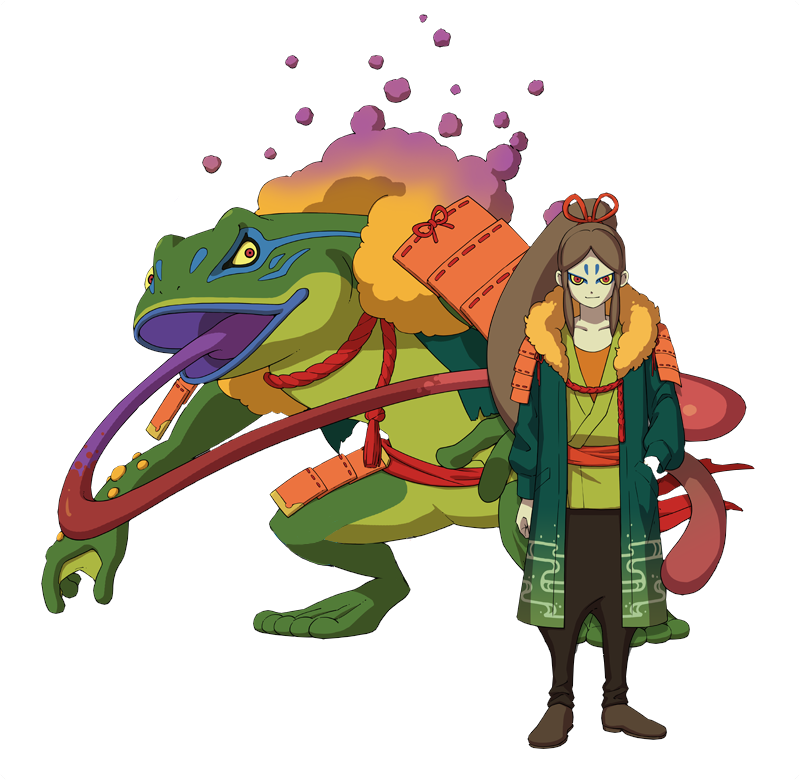 This legendary giant toad was only given a human-like form in the previous Yo-Kai watch titles, which was humorously translated as "Toadal Dude." Thankfully, Shadowside gives him an actual, full-blown giant monster amphibian form, complete with even toxic-looking, slimy froth! You NEVER see a toad's poisonous froth portrayed in anything! Even Pokemon's Froakie is only covered in ordinary, harmless bubbles. 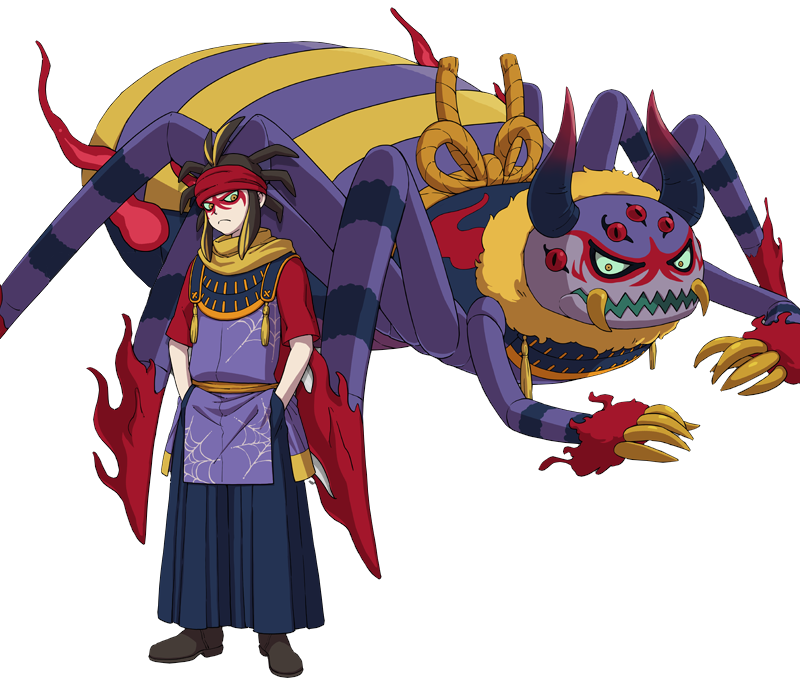 Better yet, the "Earth Spider" has also been given a proper, monstrous form, which is officially the first true spider Yo-kai obtainable in the game. Took them long enough! Not the most creative design, but a spider is a spider.

Interestingly enough, the name "Earth Spider" originated in Japan as a derogatory term for a now-extinct people who lived in the forests and mountains, and were stereotyped as vicious bandits. 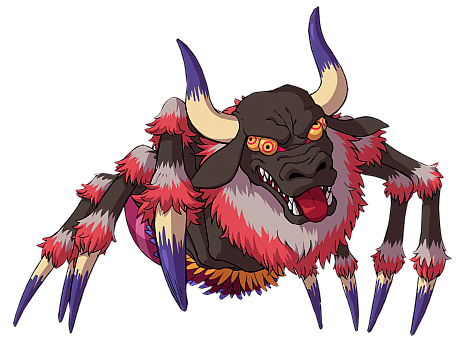 There's another spider obtainable in this one, too! This is another classical Yokai often called Ushi-oni, which basically just means Bull Demon, but many Ushi-oni are portrayed with the bodies of spiders. I like that they gave it two weird eyeballs per socket, so it wouldn't just be an ordinary cow head tacked onto an arachnid. As a fairly powerful monster in mythology, they made this one an S-rank Yo-kai! 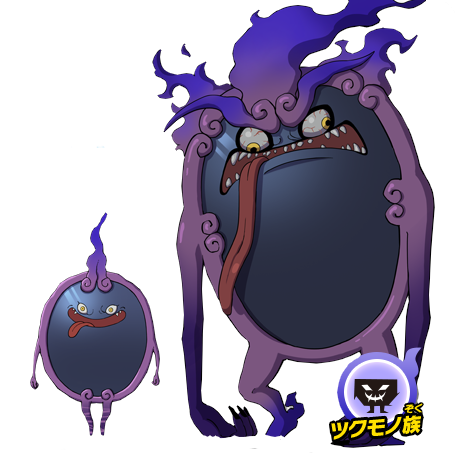 Mirapo is a Yo-kai Watch staple, at least in the games, since its body functions as a portal and serves as your means of fast-travel! I'm not sure what's up with its Shadowside version, which even in its "Lightside" mode has a meaner, more conniving look than its classic design. I love the facial expression it gets in its more monstrous mode, too!

What's really nice however is that none of these new designs actually replace their predecessors, who are simultaneously available in the same game. 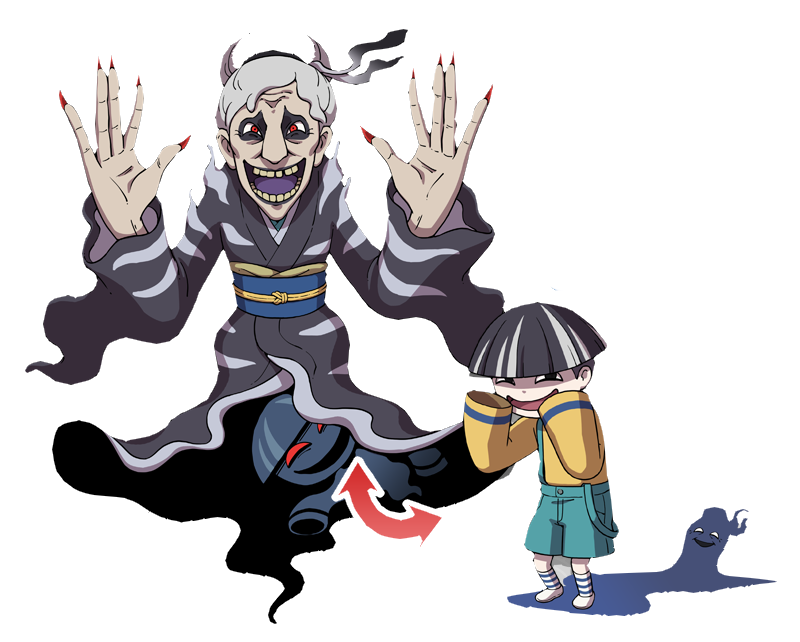 This Yo-kai interestingly seems to be two ghosts in one. The Lightside form is a sneaky looking little boy, but you can see there's some sort of other spirit hiding in his shadow. His name is actually a combination of "hide and seek" and "boy." In Shadowside mode, a ghostly old woman takes over, while the boy's shadowy soul hides under her robes, and her name is a play on "old woman" and basically "peekaboo!"

Whatever this one's story is supposed to be, I get the feeling it's a fairly dark and possibly very sad one. 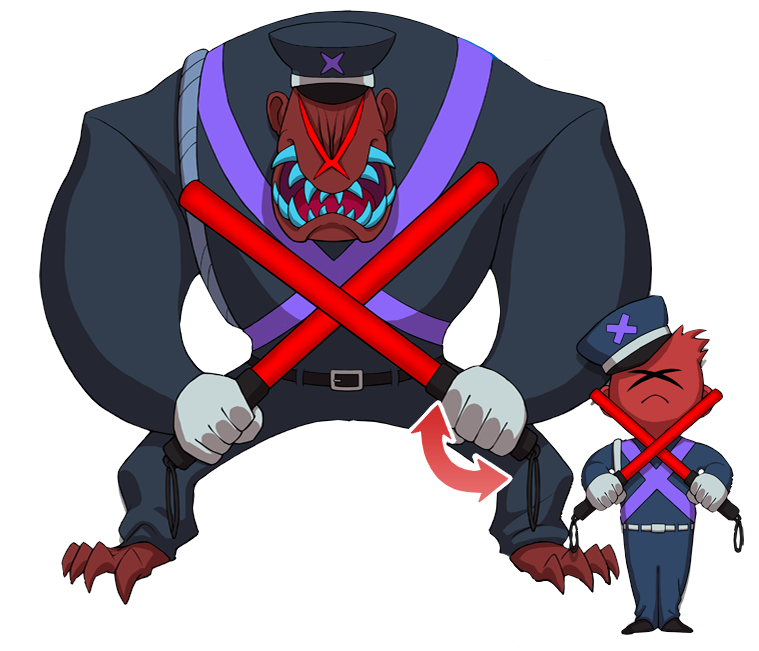 This one's Lightside form is dressed like a Japanese traffic cop, and named after "Dame" or "No Good," so I guess he goes around telling you what not to do, or where not to go. In Shadowside form, his name just meeans "ABSOLUTE GUARDMAN." We can guess what kind of guy he is, and the design is a lot of fun; especially the red X-shaped eyes. That's actually REALLY cool looking! 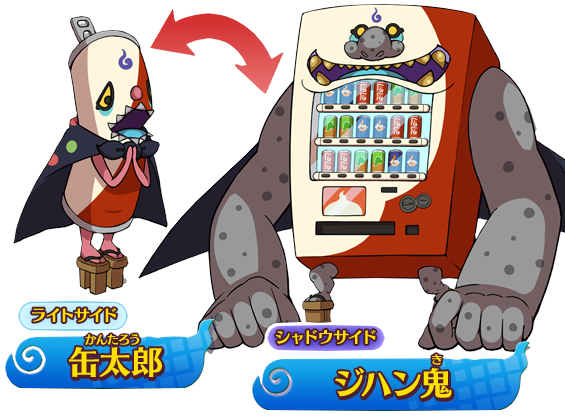 This one is pretty self-explanatory; it's a soda can Tsukumogami whose Shadowside form becomes a vending machine, bitter about having been thrown away when he was just a regular drink can. Kantaro's name is literally just "can" and "taro," a suffix common to little boy names, so it's a lot like just being named "Canbert," while Jihanki is a portmanteau of a vending machine and another term for oni.

I really like Kantaro's sad little yellow eyes, but most of all the "teeth" formed by his torn metal. Meanwhile, I think Jihanki's warty troll nose ties the whole design together with a lot of unique personality. 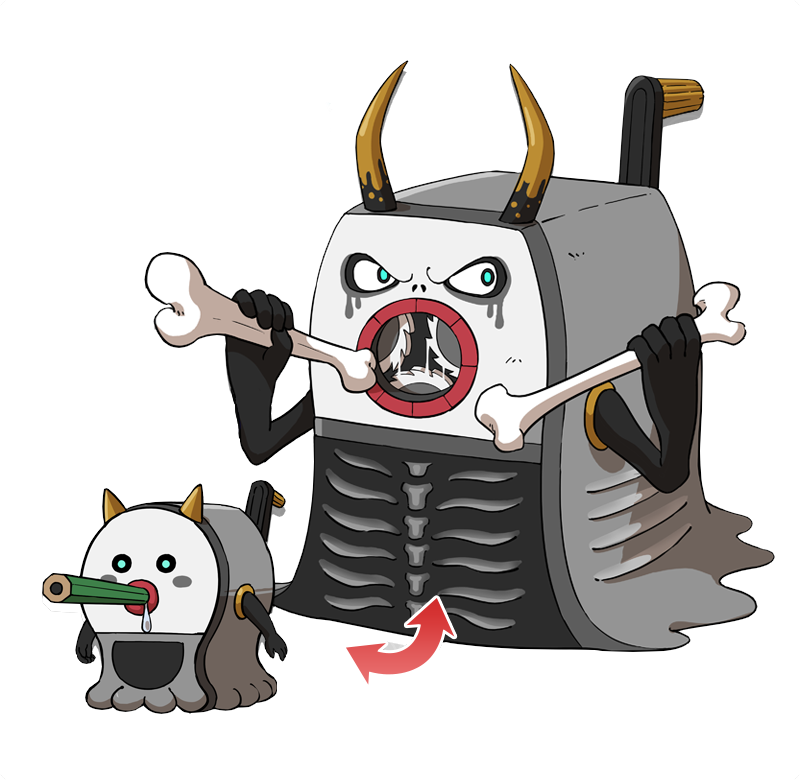 Oh my god, WONDERFUL. A demonic Tusukumogami pencil sharpener! It's so cute and pathetic in its blank-eyed Lightside form, mindlessly drooling as it sucks on a pencil like a weird ghost baby, but then it goes Shadowside and becomes a freaking BONE SHARPENER, which is basically exactly what its name means. What an absolutely bonkers concept for a monster! Look at those triple sawblade teeth! I love how goth they both are, too, especially Bone-sharpener's dripping eyeshadow. 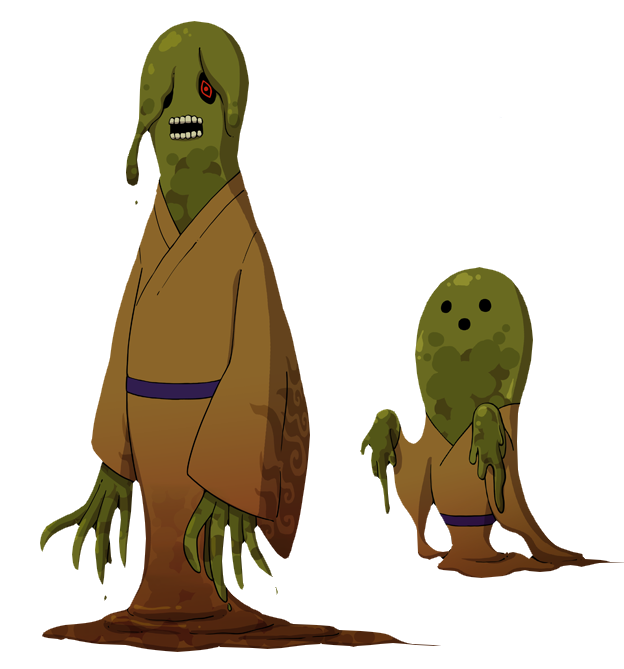 OH MY GOD I want to know what these are! Look at them! Monsters made of pure slime can easily look generic, but these two have such a lovely filthy color scheme, Becchan's little ghosty face is pure delight and Nuttarabecchan's ghoulish face, as well as her tentacle-fingers, are both just awesome! Love how their even their kimonos are melting into slime, too. 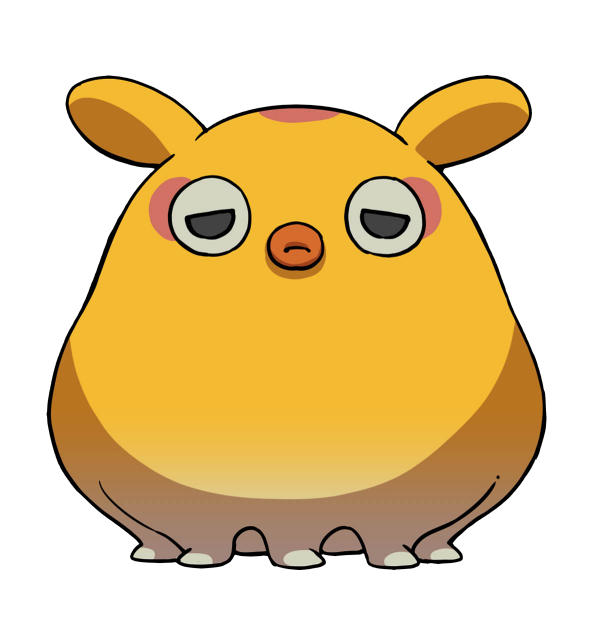 OH. MY. GOD. They did it. SOMEONE finally did it. Someone finally put a deep-sea dumbo octopus in a game. How did it take this freaking long?! Even nearly a couple whole decades after "Finding Nemo" brought them into the mainstream?! There's almost nothing in the ocean more whimsical and lovable. Nothing. And they've captured the real animal perfectly. The eyes are smaller, sadder and more forward-facing, but that's just what gives it a more Yo-kai Battlemonster feel.

This one has no Shadowside form, being a new addition to the classic Yo-kai Watch setting, and its name is a play on "mendako," or "umbrella octopus," and "gomen," or "sorry," because this little Yo-kai for whatever reason has the power to make you apologize too much. 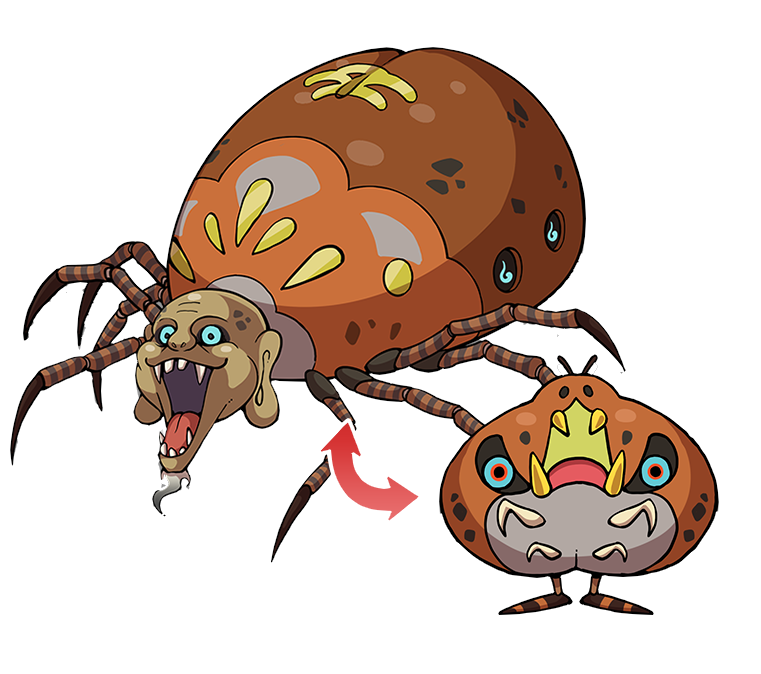 I thought I'd used up my excitement on the dumbo octopus, but just a short while after I put up this article, the official website revealed one more monster that's not only extremely "me," but now OFFICIALLY the single most "me" thing in Yo-Kai Watch, because the very instant I saw this design I knew exactly what I was looking at. The untrained eye might think this eight-legged beast is a spider, but to me there's NO mistaking the details of a tick. Sure, it's a tick with an old man's head stuck on it, but that certainly has a classical Yo-Kai charm to it, and it's only the Shadowside form anyway. The little "light side" form is the most perfect little tick monster I ever did see, with eyes more appropriately down on its single, fused body segment and a lovely arrangement of fangs that just somehow "looks" parasitic. Daniel is SUCH a novel way to stylize a tick, it's almost everything I ever wanted from an ectoparasitic Pokemon and have still never been given!

The name is because Dani is a word for mite or tick, and in Shadowside form, Daniel becomes "BIG Danny!" I'm actually adding them to this article an entire couple of months later, and now I'm all the more hopeful that an English translation of this game pans out...as well as hopeful they'll really be able to add the rest of the original Yo-Kai by DLC, though unlike Pokemon, I think my perfect six-monster Yo-Kai team...actually could consist almost entirely of the brand new generation?! Heck, for that matter, I wouldn't care if I were limited to just one monster in this whole game, as long as it could be a youkai tick.