Crazy Bones is a brand I typically review fairly early into the season, but this year, something a bit different happened that I'll get to shortly. First, I think we're a bit due for a refresher on what exactly Crazy Bonez is.

I first took notice of Crazy Bonez in 2015, the year they produced two varieties of skeleton spider and an additional skeletal scorpion. Now, there are those who balked at this on the basis that neither of these animals have bones, but the brand is called CRAZY bonez. Not REGULAR bonez! Nobody would buy that! Who would buy that!? You want to see a "Regular Bonez" skeleton spider? Look closely:


....That's right, there's nothing there. What a ripoff! CRAZY BONEZ brand Skeleton Spiders HAVE bones! Because that's CRAZY!!! 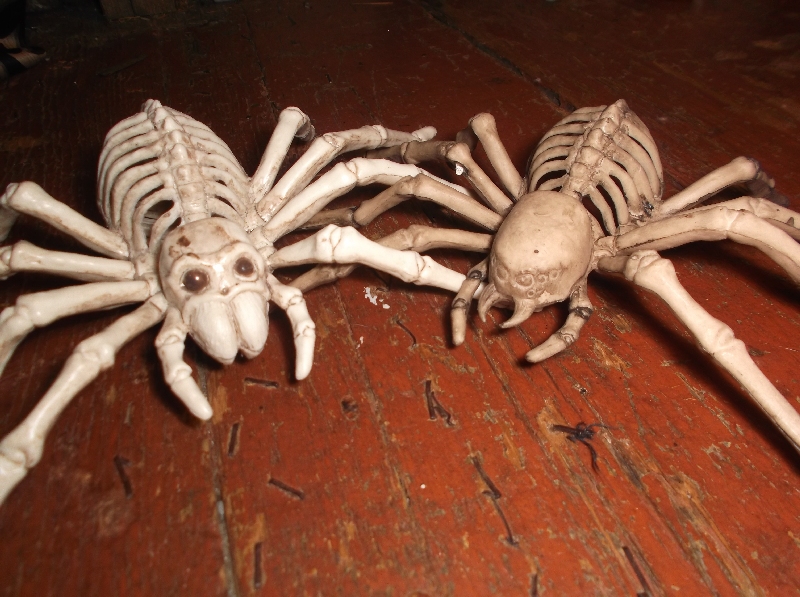 ...And it was such a hit, other manufacturers have been turning out their own imitations ever since, which I am still willing to embrace because no amount of bone spiders can ever be too many bone spiders, but the real deal does tend to be sturdier, sculpted better and nicely painted, not to mention their original spider even follows actual spider anatomy as close as you can with vertebrate bone. It even has chelicerae! Other fools slap mandibles on their spiders! There's no such thing as a spider with mandibles!! 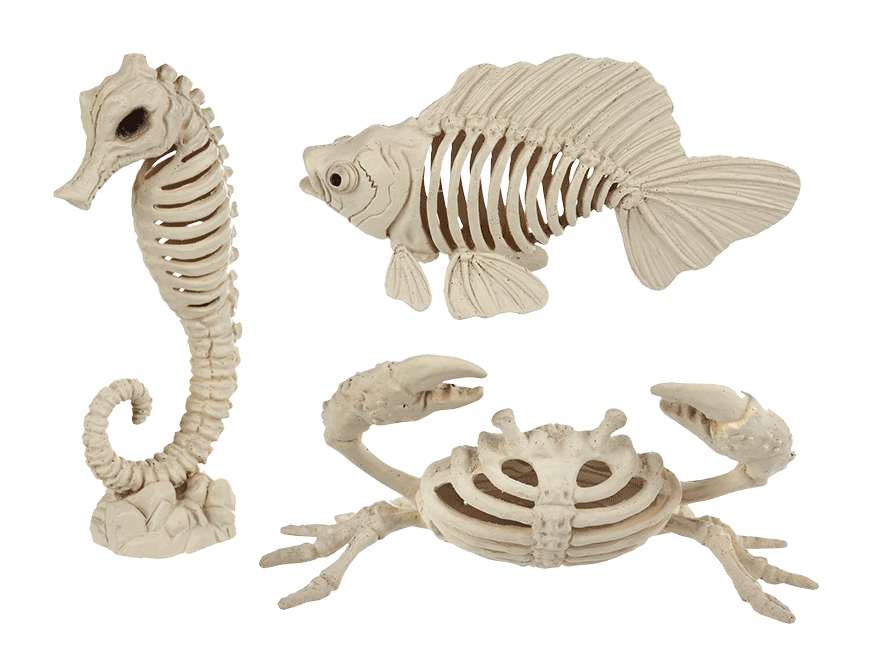 Perhaps due to these many knockoffs, Crazy Bonez has clearly strived to do something brand new every year. Skeleton cephalopods, skeleton teddy bears, skeleton rubber duckies...sometimes even the skeletons of things that already have skeletons! Check out that seahorse! Even then it's a surprise, because this might be the first "spooky Halloween" seahorse I've ever seen in my entire life. Nobody looks at a seahorse and says "brrrrr!!! Wouldn't want to meet that in a haunted house!!!"

But you know what though? They should. When somebody looks at a seahorse, that's what they should say. Every time. Have YOU looked at a seahorse? I mean really? Have you ever stopped and re-evaluated this broken atrocity of a fish?

...Sorry, sorry, I'm getting off track. I'm just excited! Well, kind of excited. A little more disappointed, because I originally wanted to do this year's Crazy Bonez review as a video review, but my audio just wasn't working out, I got a little sidetracked living in an apocalypse and here I am caving to just my usual text-and-photo kind of review a full two months later than I intended.

The reason I wanted to do this as a video, though, is what's exciting! Because, all the way back in June of this year, I actually got a really nice e-mail from Crazy Bonez about how they always read these reviews, they love everybody's feedback, and they actually wanted to send me some free boxes of skeletons! That's like I'm some kinda professional-level reviewer!

I wound up with a skeleton human, dragon skull and flamingo that I've never owned before, but have reviewed before, so you probably don't want me to retread more territory than I already have, but nestled among these more familiar bonez were two entirely new items I can review, the first of which is what they're selling as a "gargoyle" skeleton. BEAUTIFUL! It's a really fantastic sculpt. Only the head and jaw are articulated, but it's molded in a very fine "skulking" pose, and as you know, this is an animal that skulks for up to eighteen hours of its activity cycle.

Such beautiful blue eyes, too. A lot of Halloween creatures with light-up eyes default to a rather bland, ketchupy red coloration we've all seen before, but when Crazy Bonez light up, it's typically with these cool, icy, more phantasmal looking lights. The first one I've seen actually light up red is, in fact, the dragon skull, and I think that's a case where you definitely want the light to look warmer.

You know what I love most about this one, though?

They may have dubbed it a "gargoyle" for mainstream retail purposes, but I feel like there's no mistaking the bones of a goatsucker. The spines down the back are suspect enough, but then you've got the insect-like spines on the arms and legs. That's not necessarily an established chupacabra feature, but it's the kind of feature a chupacabra would be more likely to have than a gargoyle, associated as they are with space aliens.

I'm not sure how conscious all of that was, but I'm leaning towards it being at least somewhat intentional, at some point in the design process, because a counterpart product this year is a truly lovely fiji mermaid skeleton at Spirit Halloween, an overtly Cryptozoological sort of phenomenon! I've also seen two-headed snakes and a miniature gryphon skeleton around town, so 2020's Crazy Bones selection is definitely leaning into Mythological, Urban Legend, sideshow gallery sort of subject matter. Nice!!

I won't spoil the entire rest of the new products - which, even here in mid-October, are easy to find on and off the internet if you look! - but the other new item they sent me is what they call Starvin' Marvin! That's a gag name much older than "South Park," so you don't need to flood the comments with that, nor do you need to point out to me that Marvin kind of looks like Papyrus from Undertale. Instead, we can move on to how great it is that he is not a puppet of a skeleton, but the skeleton of a puppet, as evidenced not only by his googly eyes but his blocky, wooden-looking skull.


Marvin's puppet functionality is limited to his arms moving up and down, but to be honest, they didn't even have to go that far. He would still be a hilarious and cool looking prop with no puppet action at all, and at least you can easily make him look like he's furiously hammering away at a keyboard. He must be leaving angry comments down there as we speak! Look at him go!

My very favorite thing about Marvin, however, is the simple fact that his little hands are painted a brighter white than the rest of the surrounding bone...like a classic puppet's little white gloves! This is how you know someone had real, genuine fun designing a product. The white hands only mean one more step in the manufacturing process for something that some people aren't even going to notice until it's pointed out. It's not there to sell more units. It's just there because it's more entertaining that way!

Thanks, Crazy Bonez, for having as much fun with this stuff as I do, and thanks as well for all the lovely skeletons that appeared on our front porch.

...We also enjoyed these plastic plastic ones, too.