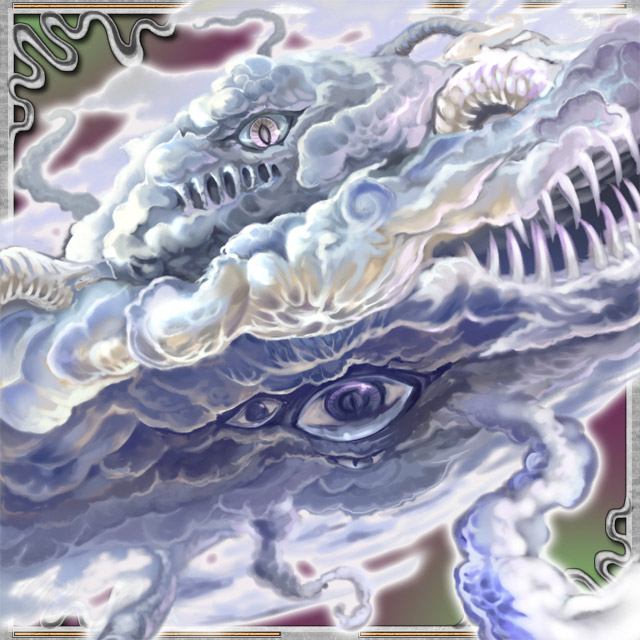 I'm not entirely certain of this, but given that a lot of other "Elder Sign" monsters draw from similar literature, I think this is intended to be one of the predators from Sir Arthur Conan Doyle's Horror of the Heights. You didn't know the creator of Sherlock Holmes wrote any monster stories, did you? Horror of the Heights was written only a decade after the famous first flight of the Wright Brothers, and has the pilot of a personal plane ascend so high into the atmosphere, he discovers an entire undocumented biome of vaporous, cloud-dwelling organisms.

I could be totally wrong, too, because this menacing shoggoth-esque nimbus doesn't look that much like the beaked, squid-eyed creature that attacks the protagonist, but it's no more dissimal to its source than a number of other monsters in this game. 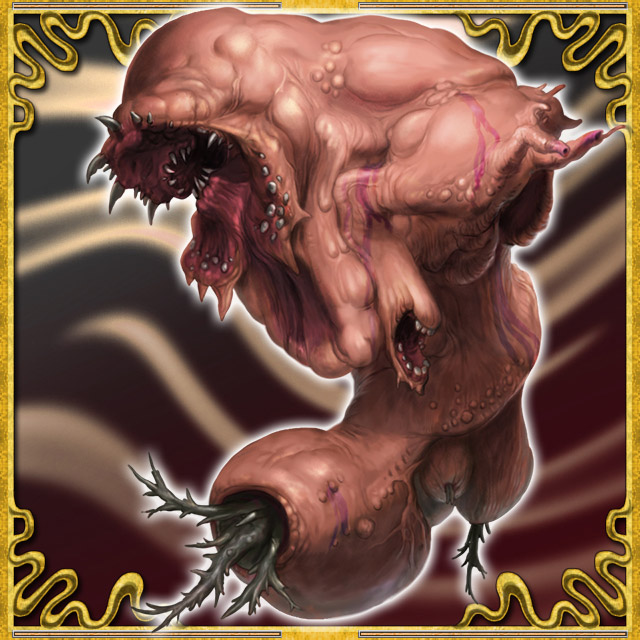 "Flying Polyps" are never formally described by Lovecraft, other than the fact that they are both airborn and "polypous." At the time, this could have meant either octopus-like or tumor-like, and maybe he was just thinking about mollusks again, but I definitely prefer the interpretation of a teratoma impossibly hovering through the sky. I feel like they also don't really need any mouths or fangs to be scary, but I do find it interesting how this version looks like a more natural animal was supposed to form. That actually gets me thinking about a "flying polyp" that grows as a literal tumor from something else. Maybe like an otherworldly parasitic infection, or maybe there's just something out there so alien that when it gets cancer, its cancer starts flying around and building crude, monolithic cities. 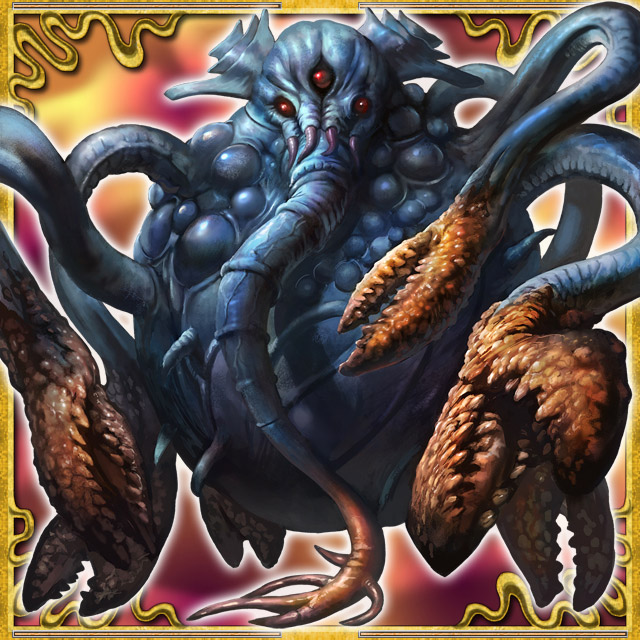 I'm always fond of monsters that evoke a particular animal without actually being that animal, and Rhan Tegoth is a giant bug monster that happens to look a lot like an Elephant. There's not much lore to it besides the fact that it was once worshipped by some weird bear-like monster people and now it's hibernating for an unknown amount of time, but yeah, really cool design here! Segmented, spherical and warty body, three-eyed arthropod head, segmented trunk-like proboscis and wide, flat, ear-like antennae all contribute to its pachydermal feel, but then it has those muscular tentacles ending in such delightfully crusty looking crab claws. BOY are those crusty!!! 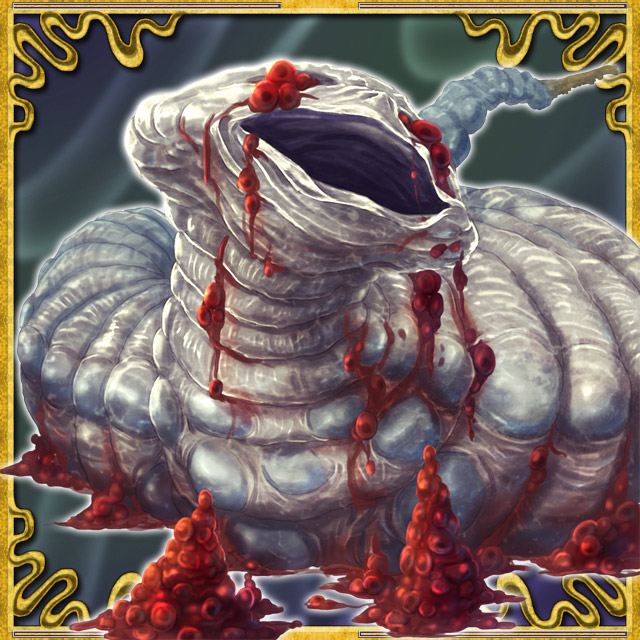 From Clark Ashton Smith's "The White Worm!" This terrifying entity is an enormous, pale grub-like beast whose empty eye sockets continuously ooze blood. This take on the monster is one of the creepiest I've seen, an unpleasantly human quality to its broad, flat head and toothless frog-like mouth. The "blood" is also interesting here, coming out in those round globules that look almost more like egg masses, or perhaps impossibly huge blood cells.

In Smith's story, the worm inhabits a drifting iceberg called Yikilt, and for unknown reasons it uses its breath to freeze every ship, inhabited island or other sign of life it encounters...none of which will ever warm or thaw no matter how much heat they're exposed to. 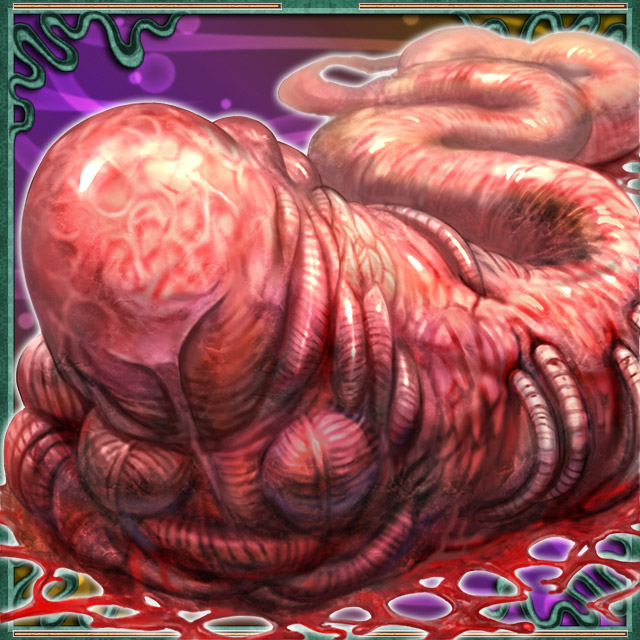 Leaving behind Lovecraft for a moment, here's another of Elder Sign's cryptozoology references, and one of my favorite kinds of "cryptid" at that! A globster, if you still don't know, is a big pile of rotten flesh, viscera and sometimes bone that washes up on a beach and can't be readily identified, or at least couldn't be before we got a lot better at zoological forensics. Long sensationalized as the remains of unknown sea monsters, we're now quite certain that almost every "globster" was just something like a heavily decomposed whale or a basking shark...but of course, some media posits the splendid notion that a globster might actually just be a globster; that maybe the uncharted depths of the ocean are simply inhabited by horrible, putrid meat-blobs.

This instance looks much more like a believable animal, like a worm or a sea cucumber, but with a slimy, translicent bubble for a head, bloody looking red slime and wormy, hose-like flesh growths that still give it the feel of a stray digestive system or a wad of discarded blubber! 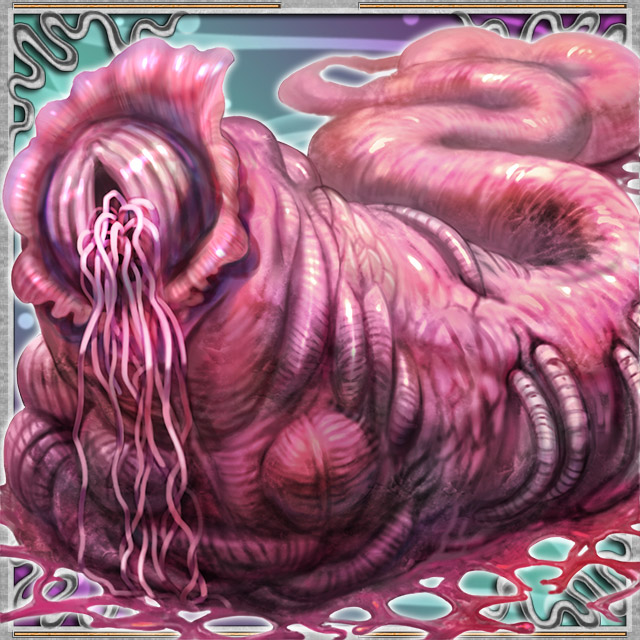 And then, there's this highly appetizing variant art, where the "bubble head" of the Globster has burst open to reveal an orifice oozing with noodly tendrils, actually not unlike the defensive mechanism of the aforementioned sea cucumbers. I also rather like how the surrounding skin almost looks like the outer petal of a rose. Romantic! 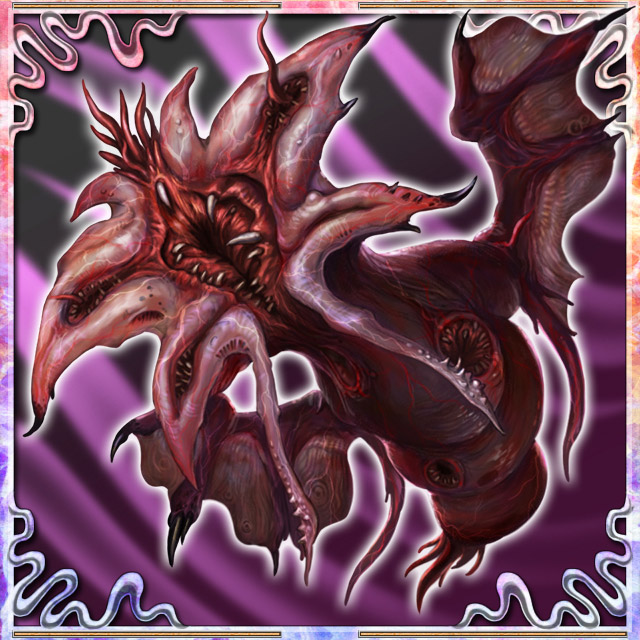 This monster comes from Robert Bloch's "The Shambler from the Stars," and was actually the first story I ever read that's considered part of the Cthulhu family. Constantly emitting a sound like maniacal laughter, the Star Vampire is an alien being that is completely invisible until saturated with its victim's blood...and I guess that's pretty much it. A straightforward, simple monster concept.

What's apparently not so simple however, is the design. The book describes a gelatinous organism covered in sucking, tubular tentacles and a single pair of clawed arms, but artistic interpretations more often portray a sort of octopus or amoeba with a few lamprey-like mouths. Though Elder Sign's take is even farther from Bloch's description, yet this game has once again come up with my favorite version of a given monster. It still has the multiple mouths and it technically still has the "clawed arms," but those mouths are situated in the fleshy petals of a flower-like head, and the arms are webby bat-like wings! You could say the overall effect is off a "winged leech," but it's so much cooler and weirder than that! I love any monster with a maw of meaty petals, and this one is especially distinctive. 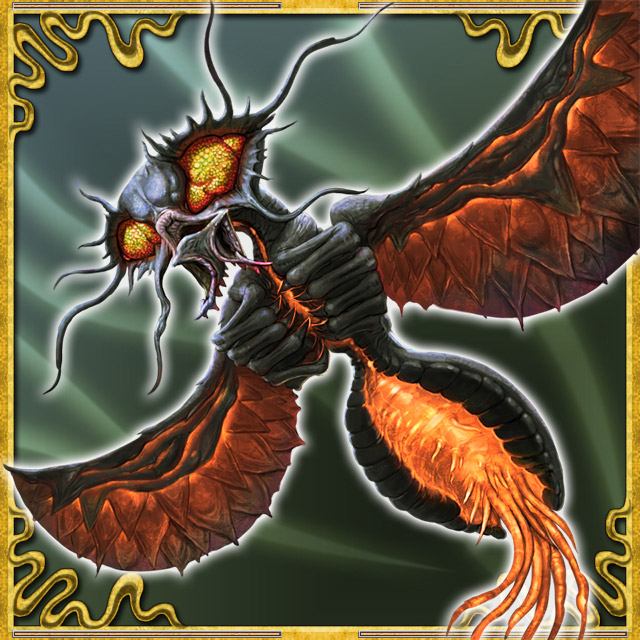 In both part I and part II, we saw creatures related in some fashion to the Insects from Shaggai, and here they are at last! I actually reviewed my personal favorite drawing of the Shan last year, and you'll also notice several other monsters in that review that we've seen in this review series, but I have to admit that Elder Sign's Shan is an objectively much cooler, more memorable, more frightening design than any other I can think of. The way the wings look so "bird like" with their overlapping, triangular scales is quite unique, and that face is just incredible! It's easy to just slap a scary insect head on one of these things and call it a day, but this monster boasts a strange, gloomy looking fish-face dominated by those enormous, yellow insect eyes and their fabulously whispy, eyelash-like surrounding tendrils! This is such an original visage for an alien arthropod, it almost keeps distracting me from the curious details of its body. Notice how the underside of the abdomen is hollow, its concave interior lined with a luminous orange flesh, and that this cavity continues up into a crevice that only ends at the monster's chin.

The Shan are small creatures, no larger than pigeons, but can phase into a human head and take control of their body, and I can't help but picture this version flaring its whole underside open to cup somebody's brain! 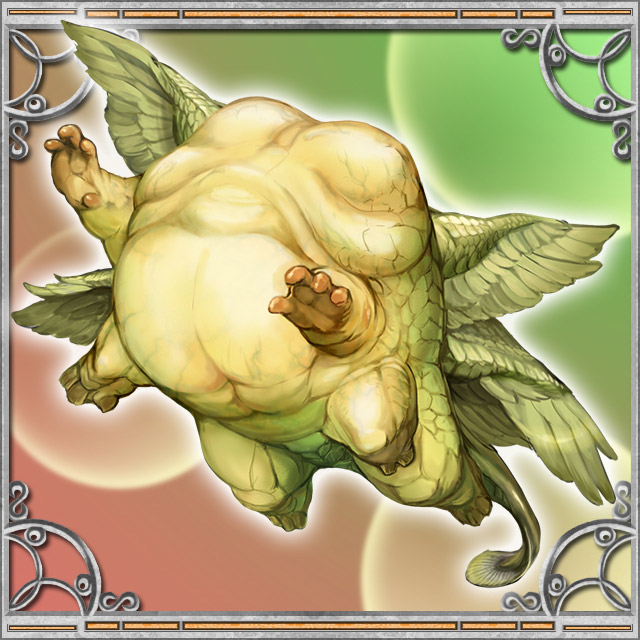 I actually have no idea what this one is supposed to be. 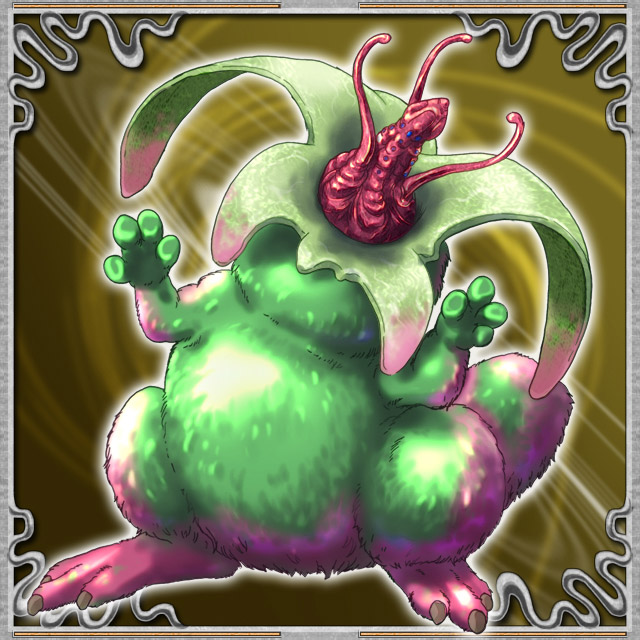 Hey, it's a Moon Beast! Lovecraft described these things as being white, fuzzy, almost amorphous frog-like monsters whose faces were only clusters of tentacles, but that's just not nearly as delightful as this furry frog-bunny. There's only three red tentacles branching off of an unpleasantly phallic proboscis, but it's all surrounding by flaps of flesh like an enormous banana peel, and I love every single thing about this combination. It's just NUTS! It works so much better as an entity that has a name like "moon beast" and inhabits a realm of dreams. What's even nuttier however is that the moon beasts are pirates, and they're pirates that operate ordinary, human-style wooden sailing ships...which fly through the air.

That's 29 monsters down of the 30 I set out to review, so what did I reserve for the very last? 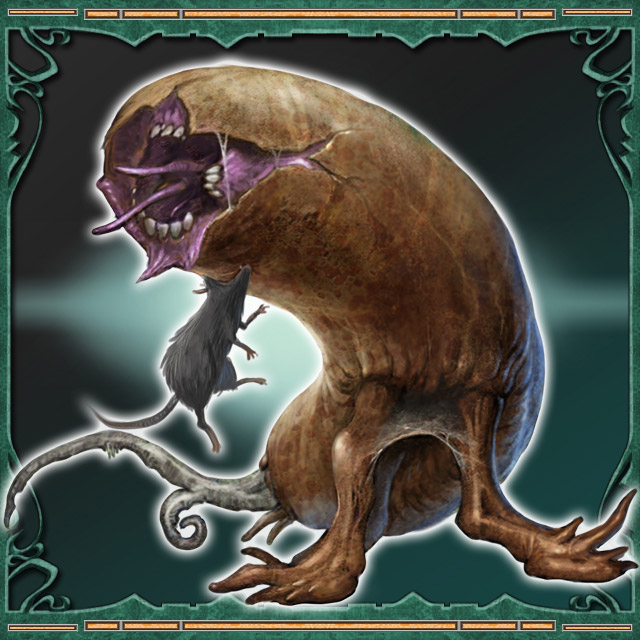 Yes, haggis. The Scottish delicacy consisting of a sheep or calf's offal stirred up with oats and boiled in the animal's own stomach. It's a food people love to joke about, but probably tastes delicious, if my own stomach was capable of digesting literally any liver without getting violently ill. Yeah, I don't know what's up with that. I liked the experience of eating liver, every single time, and my dumb body AGGRESSIVELY rejected it.

Even this Haggis is kind of making me hungry to look at, even with those strange little vestigial legs it's standing up on. Even with a gnarled, forked tail like the stem of some unholy gourd. Even with one end splitting open to reveal not a delicious minced meat filling, but three opposing sets of unwholesomely human-like teeth and gums!

Tying this weird, wacky, nonetheless ghoulish design all together is the live rat dangling from the haggis by its mouth, which is hilarious. That's just what a rat would do if such a fine meal tried to get up and walk away. It's just what I'd do. Consider that rat the "bow" wrapping up our look at this game's stellar monster art, and if you want to browse through it yourself? Better get it while it lasts from its official website, considering this poor game will never be playable again! Did you catch in our first review that every monster had an animated sprite, too?? Even this official (or fan?) wiki didn't collect all of those. Where's my little animated pixel Haggis to treasure forever!?! UGH. That must be the worst thing ever about 2020, am I right?!