Thirteen Favorites from "Lost in Vivo" 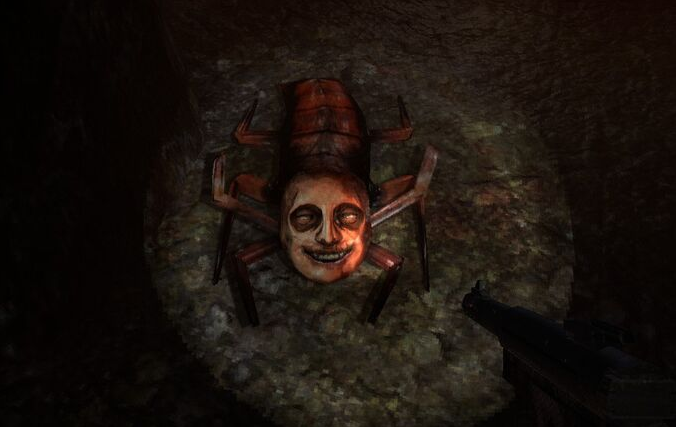 Lost in Vivo is an indie horror game that came out in 2019, but was expanded on a bit more in 2020. From the creator of Spooky's Jumpscare Mansion, which I've still never reviewed before either, this game sort of seeks to recapture the look and feel of playing through the monster-ridden mazes and puzzles of the original Silent Hill, albeit with much looser, more abstract storyline as you search for your lost service dog in an impossibly extensive sewer network. It's a simple, solid concept with a nicely scummy atmosphere, with a pleasingly high volume of creature designs! 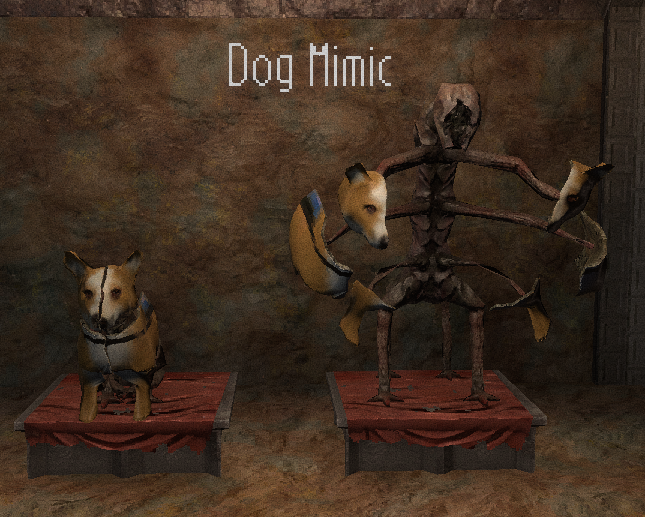 Lest you forget that this game was originally about finding your dog, an enemy type encountered midway through looks remarkably like your little pal before its whole body splits into pieces, revealing the true creature inside! This developer is pretty fond of horror movie references, so I wouldn't be surprised if this was also inspired by the giant insects from the movie Mimic, but this is something a little more alien than that; insectoid from a distance, maybe, but it's more like a fleshy stalk, six long tentacles bearing the panels of its dog disguise. It runs remarkably fast on the four little bird-like legs at its base, and the head is an indistinct, decayed-looking knob. Beautiful! 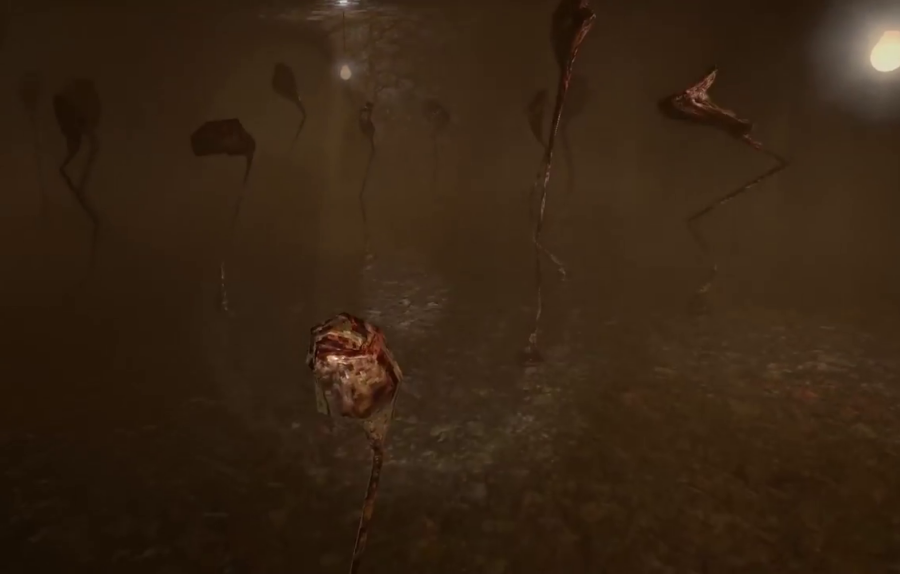 I'm glad that a lot of creatures in this game are almost or completely harmless, and the delightfully named Goobles can't really do much; they're just throbbing, pulsing little meat-balloons on stalks, just a little reminiscent of the "mushrooms" from Silent Hill: The Room with just a touch more personality. If you look closely enough at them in-game, their texture even includes some sets of humanlike teeth and gums, but not visible on all of them or aligned with their models in any particular way. The most interesting creature designs are often the ones that were just "thrown together!" 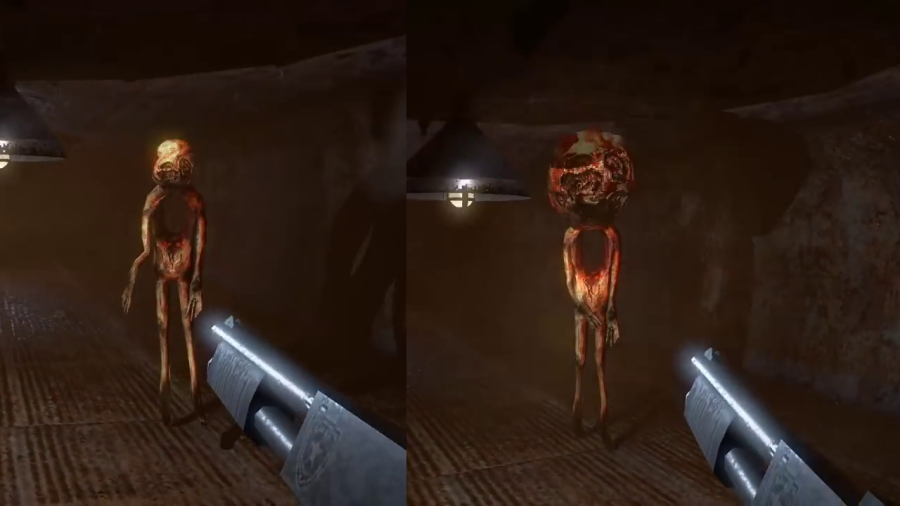 Perfectly creepy! These humanoids have huge holes through their chests, limbs that dangle limply as they float, and tumorous, faceless heads that constantly inflate and deflate. They also attack by spitting their own blood, and are accompanied by a grating, buzzing noise; a lot of unpleasant characteristics rolled into one lovable horror. Most unpleasantly of all is that the deeper you delve underground, the more Spitters are encountered hanging in the air "asleep" like drowned bodies. This is actually a little more dangerous, because they may drifting silently up near the ceiling or obscured in darkness, only to burst awake and attack if you're too noisy!

I do wish this game had kept the cut "NPC" spitter, though, which would have been encountered gleefully drinking down a big jug full of acid. Hilarious. 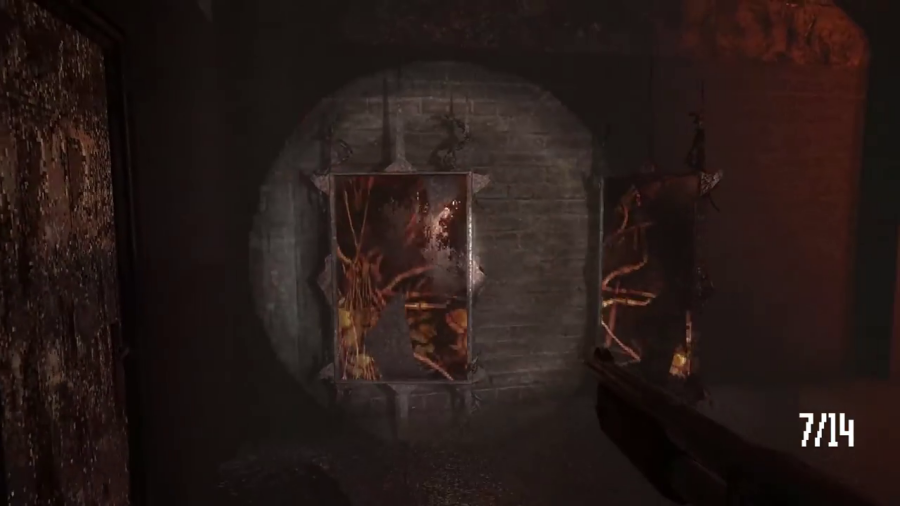 Fascinating choice! Scary mirrors and scary reflections are a dime a dozen, but I've seldom seen a monster in a horror context that was just an entire, floating, household mirror, unless some sort of demon or spirit could reach out of it and grab you. This thing simply tries to ram you with its broken surface and displays a variety of weird, grisly, indistinct images. That's significantly more nerve-wracking than the usual scary mirror behavior; you just don't expect one to be a visceral, physical attacker with no spooky reflection-based powers. Real innovation to the scary mirror business! 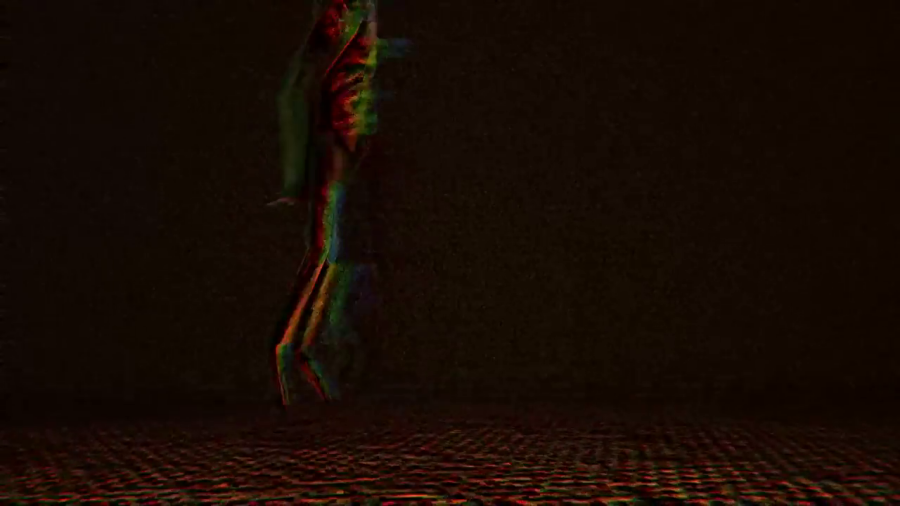 Another "purely atmospheric" monster, an optional side-scenario ends with the player falling into a tremendous, dark chamber where towering, indistinct figures can be seen wandering aimlessly, though you fortunately seem to be beneath their notice. 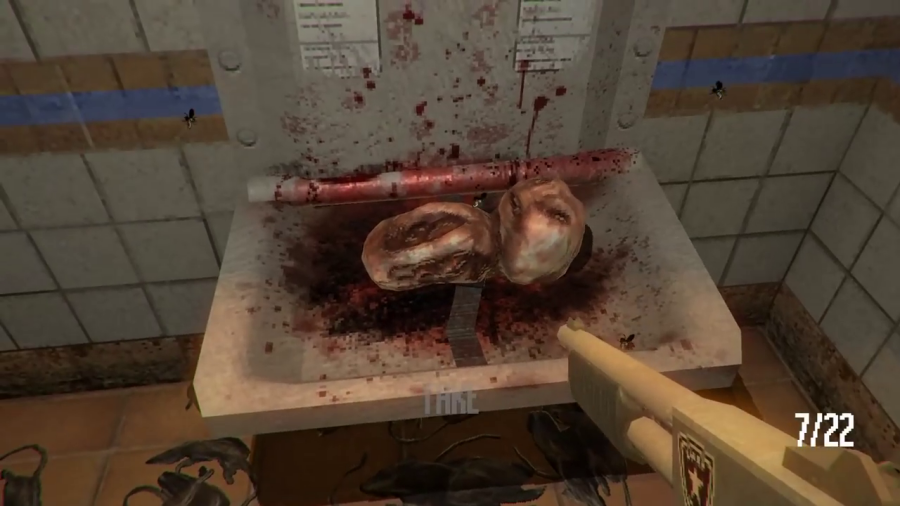 The "baby" looks more like a small, butchered animal carcass, in a similar fashion to Spike from Eraserhead. It primarily appears in a public restroom's baby changing station, and can be picked up as well as attacked and killed, but never has an effect on the game either way. 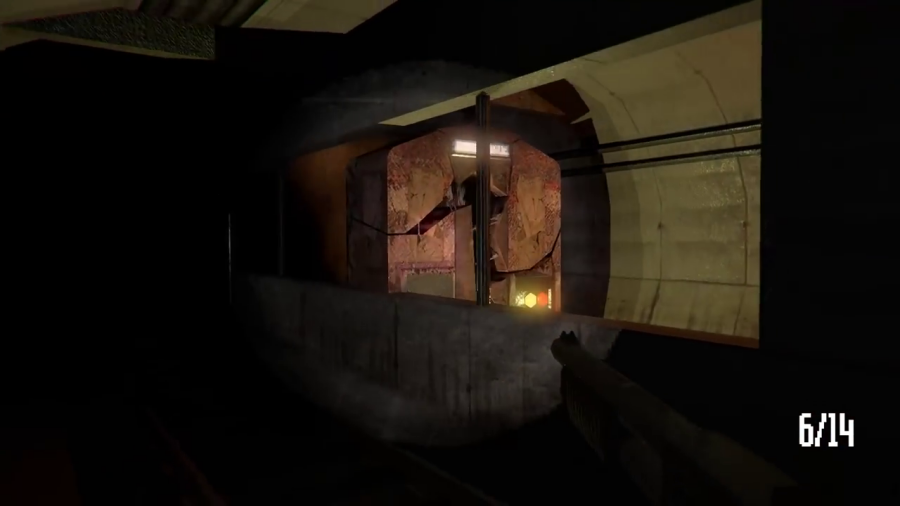 This is a pretty inventive enemy! It looks like an oncoming subway train, but can split open into a fractured, monstrous mouth, and when seen from the side, there isn't actually any train behind it, or even an entire single car; the whole thing is just sort of a roving slab. 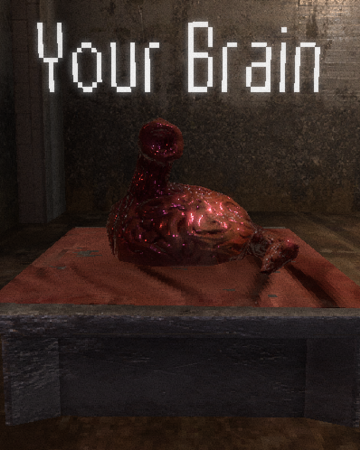 There are actually three of the entities the game refers to as "your brain," each a big, wet brain lying on a table, speaking through an unpleasantly fleshy tube. Each brain has unique, cryptic dialog:

"What are you hoping to accomplish? Without me, you're just hollow. You're pathetic. You need fear to motivate you."

"Do you think you're getting better? Does doing this even have a purpose?"

"I'm your identity! I'm your crutch! You used to cling to me like a parasite. I know you better than anyone. And I know you're weak. You'll come right back."

The story, like I said, is quite vague in this game. It's never clear why "your brains" say what they do, but it's certainly atmospheric. Sadly, as cute as the little guys might be, you have to kill all three of them to proceed. 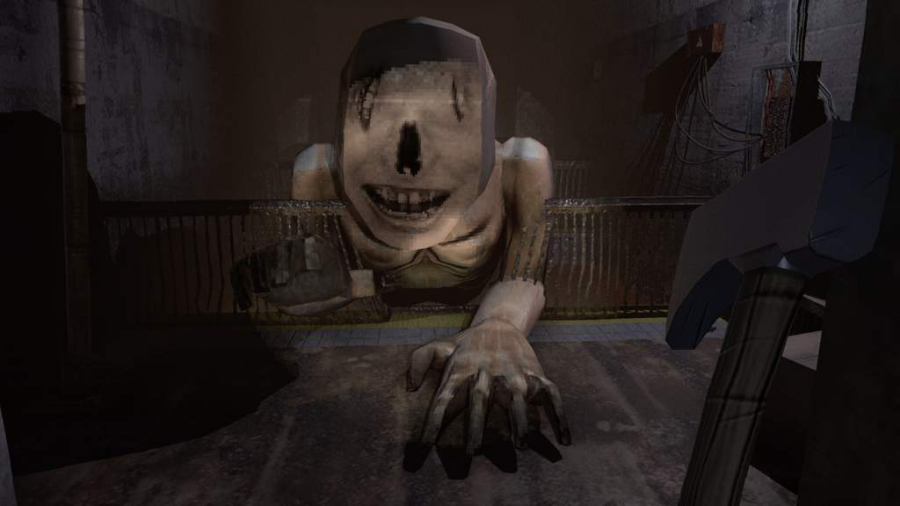 This enormous monster appears and pursues you every time you splatter "your brain," and it's splendidly frightening; a huge, white, hairless and legless humanoid that drags itself along by its arms, with an almost photorealistic smiling mouth, a rotten black nose-hole, and additional human mouths where its eyes should be. 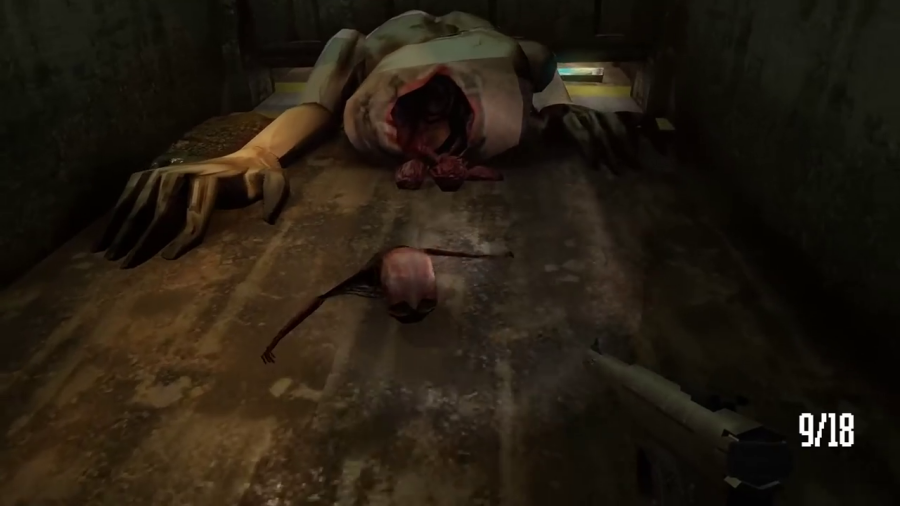 The most interesting thing about the Siren, though, comes only when you finally kill it, and its head bursts open like an egg. The withered, ghoulish little fetus-thing that crawls out is too slow to be of any danger, but pathetically drags itself after you all the same. This little buddy is known in the files as "Childhood Memories." Cryptic! 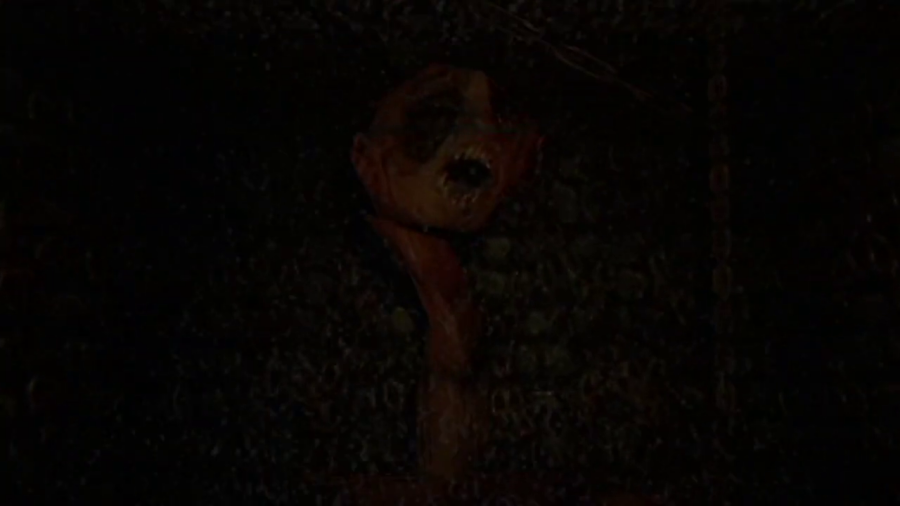 No particular name is known for this entity, but it appears in one of several optional, fan-made scenarios or "lost tapes" that play out a lot like surreal, self-contained dreams. In Lost Tape #6, the player must escape from a dark cellblock populated by vague, hooden phantoms that seem to represent the deadly sins, and takes direction from a tentacled, purple entity symbolizing Sloth. In its own dark room down its own small hallway rests a slowly pulsing mound of flesh, and if approached, a multi-mouthed head rises from the mass on a long, meaty neck. 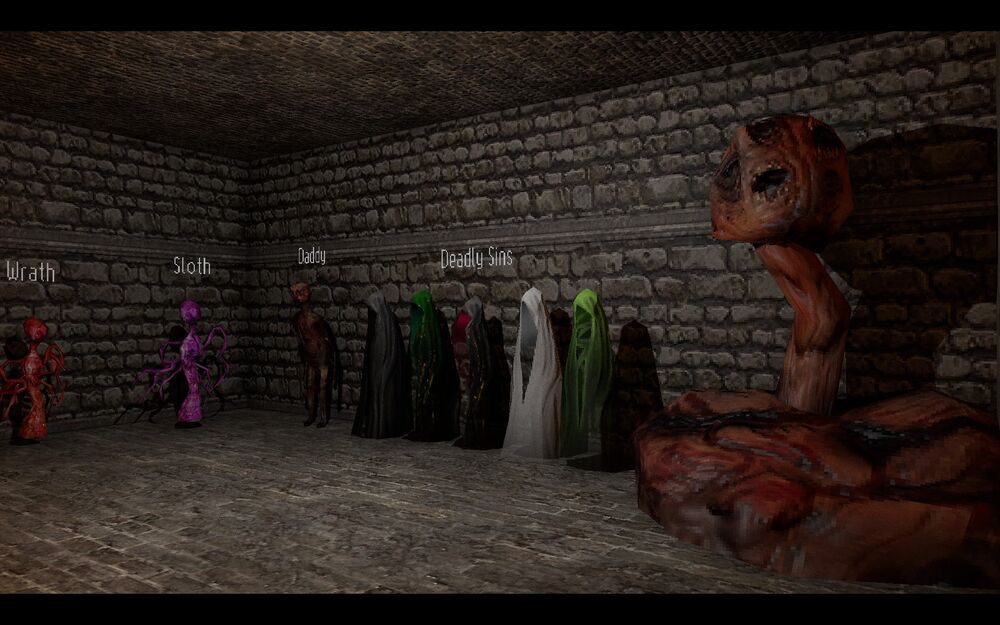 It doesn't fight back, and still lacks a name even in the game's built-in Monster Museum, but completing a series of seemingly unrelated sub-scenarios under Sloth's direction will kill this creature. The question is, should you? I love the ambiguity of this thing's meaning and purpose, as well as just how menacing it manages to feel while being basically helpless. 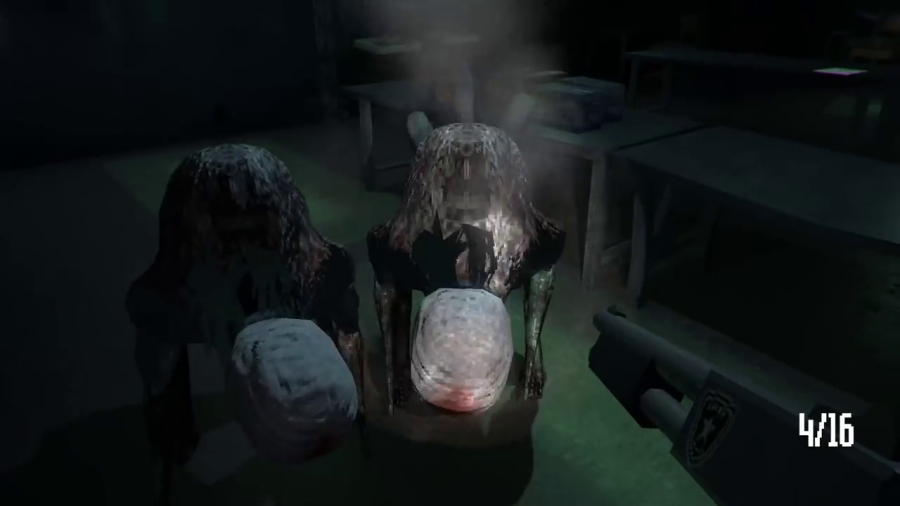 This four-legged, running enemies inhabit a secret, underground medical facility called "Nezumi Labs," Nezumi meaning both "rat" and "mouse" in Japanese. They're quite cool looking, but actually not an original design! 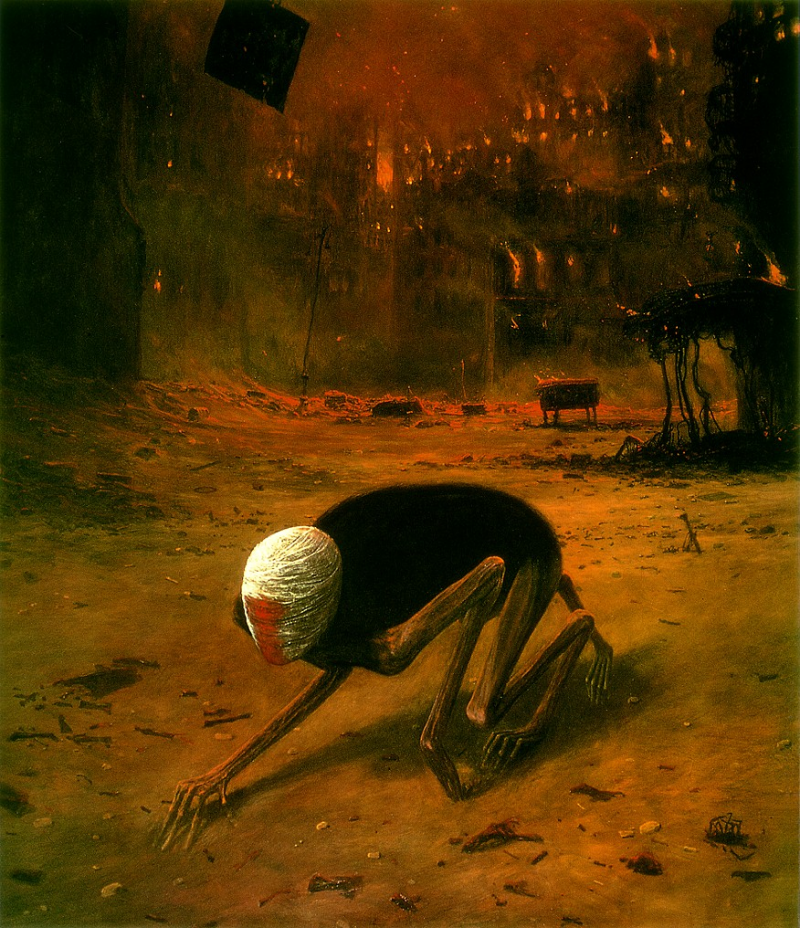 The "Rat Men" are lifted straight from a painting by Zdzislaw Beksinski, who painted dozens of bizarre, dreamlike images he never titled or explained. I always have loved this enigmatic figure with its bony limbs, bandaged head and fuzzy black body; especially the way it's scurrying through a burning industrial city. I've kept meaning to review Beksinski's "creatures" for years now, but collecting everything I'd want to cover in high enough resolution has proven a pretty intimidating slog! There's just so much! 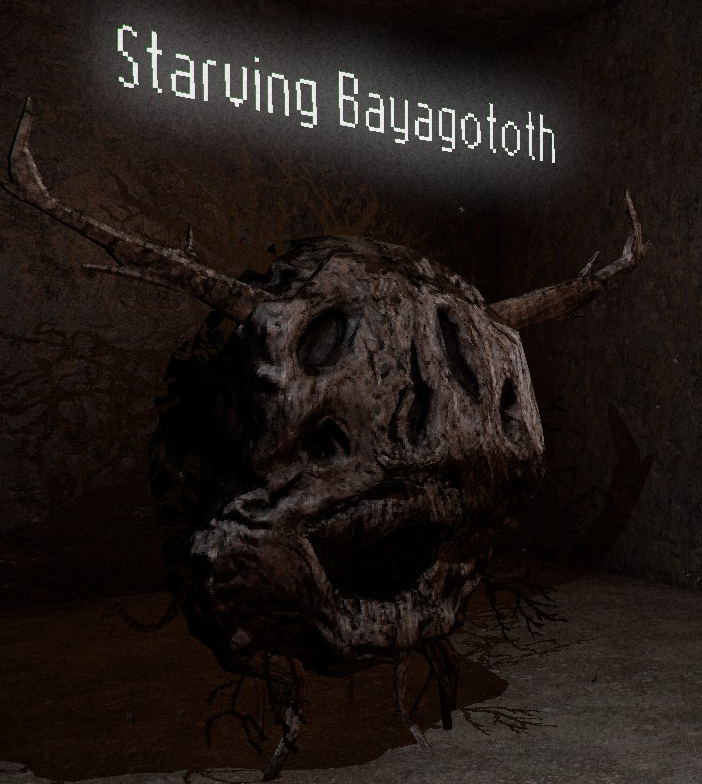 This is actually the boss of an entire alternate "Sword & Sorcery" game hidden within the main game, and it's a cosmic horror the creator thinks of as a common thread between his different settings. Its usual form is interestingly that of a nondescript if slightly ominous dead tree, a very nice choice for a "Lovecraftian God" kind of force, but its "starving" form in the fantasy sub-game is an effectively quite terrifying knot of dead wood and roots in the rough shape of a horned head, various knotholes reminiscent of indistinct facial features! I feel like I've said something like this about more than one creature design lately, but this is an exceptionally scary and unique member of the "Eldritch Horror" genre; it always pays for a setting's main Cthuloid Whosit to choose a familiar motif other than another sea creature. 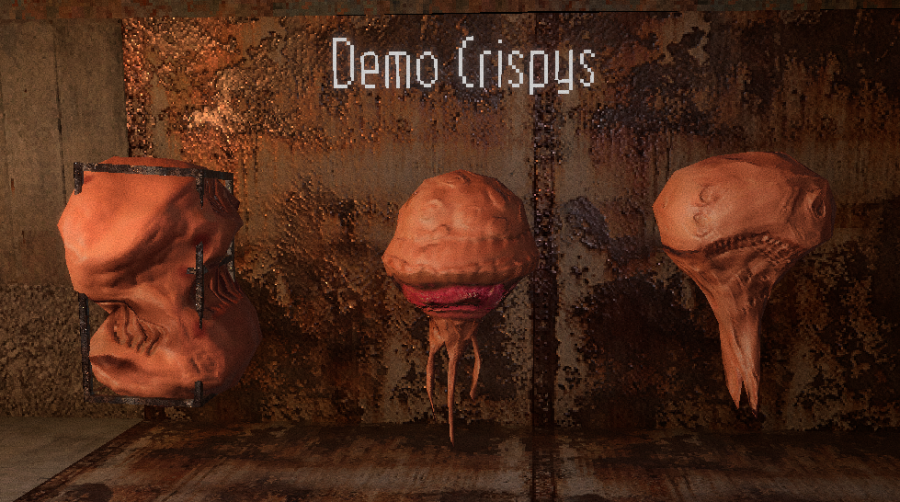 The last monster we're going to cover is my personal favorite, but probably forgettable to everyone else, and as it turns out, they were probably "supposed" to be. the "Crispys" were predominant enemies in the game's original short demo, and they immediately captured my imagination. They're floating, rotating lumps of flesh with only vague distinguishing features; one does have a rusted metal frame partially embedded through it, one looks a little like the cap of a mushroom (or something else) with some dangling "roots" and the last one looks like a big, rotten brown molar, but there's no facial features, identifiable limbs or anything else to "characterize," no traditionally menacing visual cues to them at all. Encountering a big, hovering dirty wad in the sewers is so much more intriguing and unsettling to me than a more obvious "creature" that it's actually what first got my attention when the demo dropped.

Alas, the Crispy's have a presence so reduced and somewhat "buried" in the final game that they may have only ever been temporary placeholders for more traditional Horror Critters, and yet these simple, filthy wads inexplicably floating around in the dark, seeking little more than to bump into you with their filthy wad bodies, still give me a special brand of creeps I don't quite get from the Siren, Spitters, or for that matter a majority of horror gaming foes. 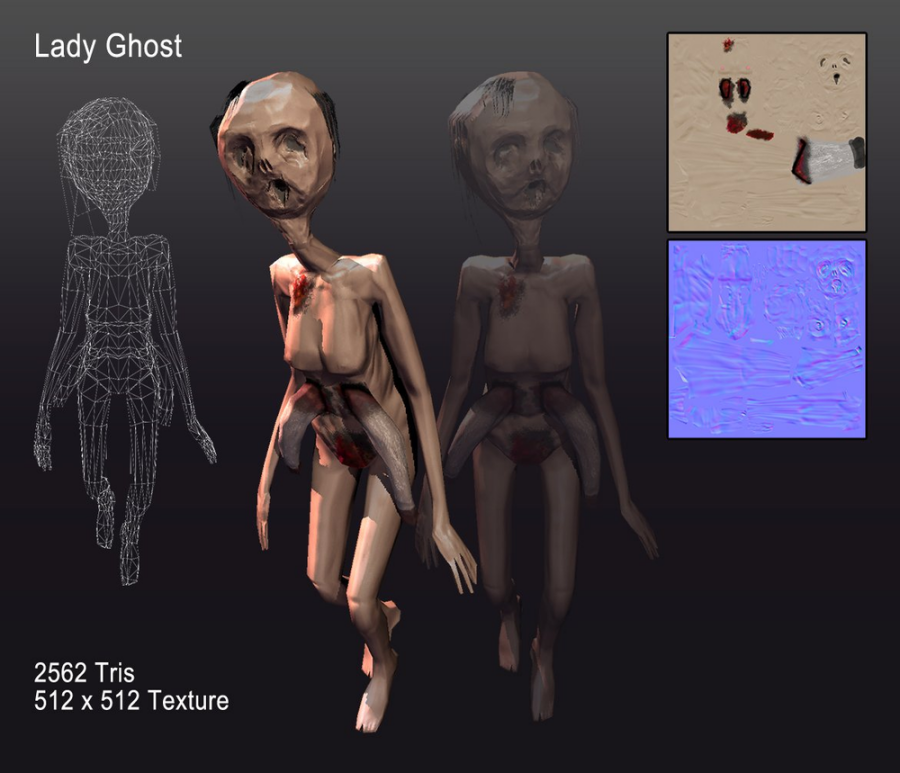 I mean this as no big complaint or disrespect towards the creator, either; it's his game, and I've just gone over why its more focal monsters are still pretty stellar. Even those falling under such easy labels as "ghosts" and "eldritch horrors" are more haunting than they typically entail, as well as, I dare say, consistently more interesting than their Silent Hill predecessors. Perhaps after being "that monster reviewer" for so many years, I've just become too acclimated to most scary tropes and increasingly crave monsters that provide a rarer, subtler kind of freakiness.

Oh no...that's what "hipster" is, isn't it? Is that what I am now? A monster hipster? "Ah, yes, nice amorphous abomination you have there, but a big dirty walnut that spins around? Now there's a realn thinker's horror." 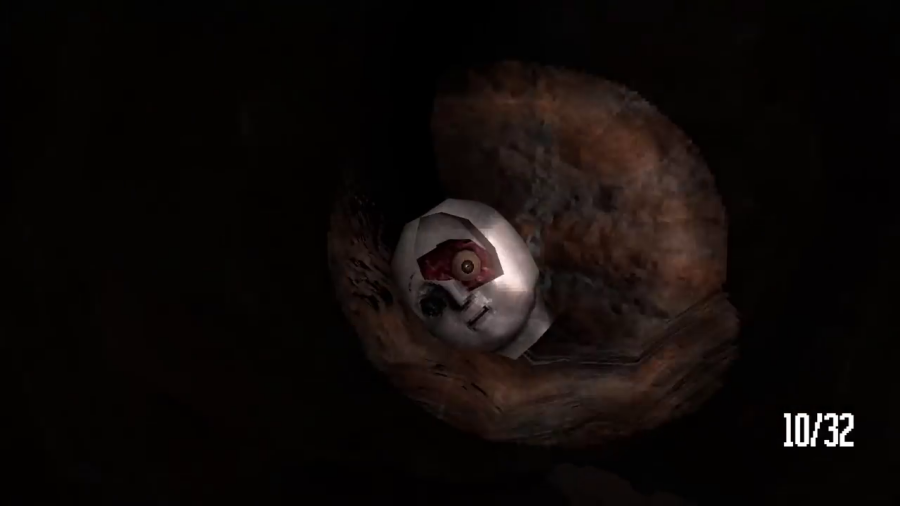 Watch, by next year I'm going to start asking for more monsters that literally aren't even creatures. The future of monsters is going to be non-anthropomorphized, normal objects that don't actually do anything. Trust me, they'll be very monstrous and unnerving in their surrounding context. The ~plebeians simply won't "get it" like you and I do.