Let's dive back into Umbrella Corp! Following the INEXPLICABLE success of a video game with FEWER MOTHS, the next Resident Evil had its remake drop just this year. Is it more disappointment? Pleasant surprise? Well! 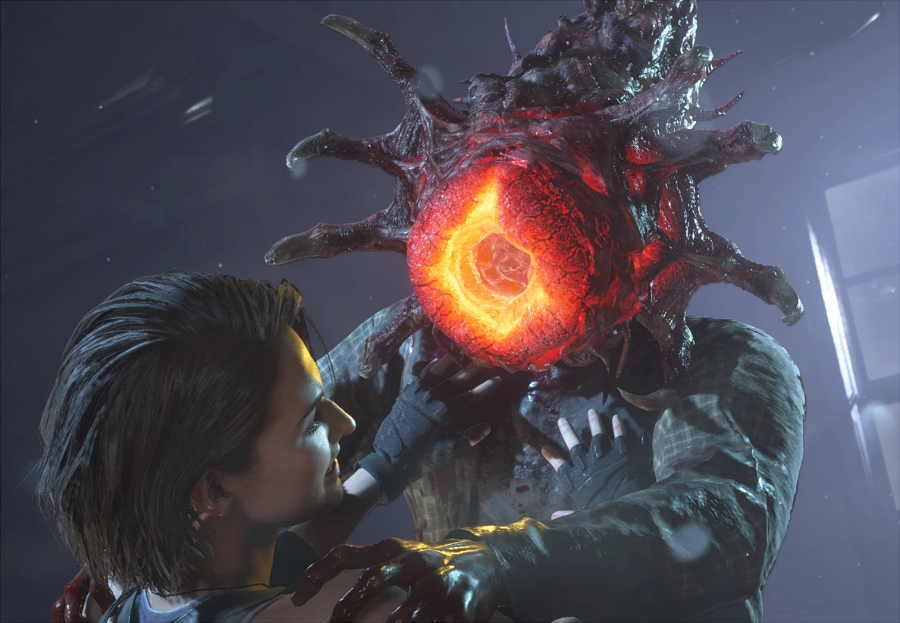 Yet again, a brand new monster is added in the form of a zombie variant. This one, however, is a more intelligent zombie packing a lovely parasitic worm! Tying this game a little more into the Plagas of the next title, the parasite can burst forth to replace the entire head of its host, and I really love the sheer nastiness of that glowing, puckered mouth. It also makes a lot of sense to have a zombie enemy controlled by one of the Nemesis-line parasites, instead of leaving the parasitic worms unique to Nemesis itself. 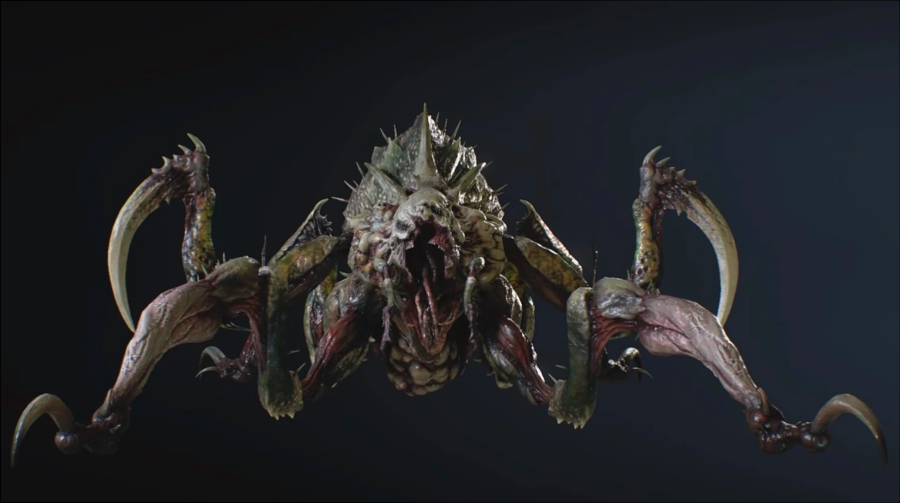 My first mixed feelings! I feel that the Drain Deimos looks a little cooler here, certainly, and also looks more like it actually mutated from a flea. It interestingly possesses remnants of human teeth, and even a pair of humanoid legs it can unfold in addition to its six insectoid ones, however, this is another monster whose eyes have been made much smaller and whose colors have been toned down; this seems to be a pattern for the remakes, as though these two things are key to making creatures more "serious." Even actual fleas aren't just grey and brown; they can show up intensely orange or red in direct light!

Sadly, the game also completely discards my favorite Nemesis enemy, the Brainsucker. It was admittedly just a sort of "upgraded" Deimos, but it was so much weirder looking! 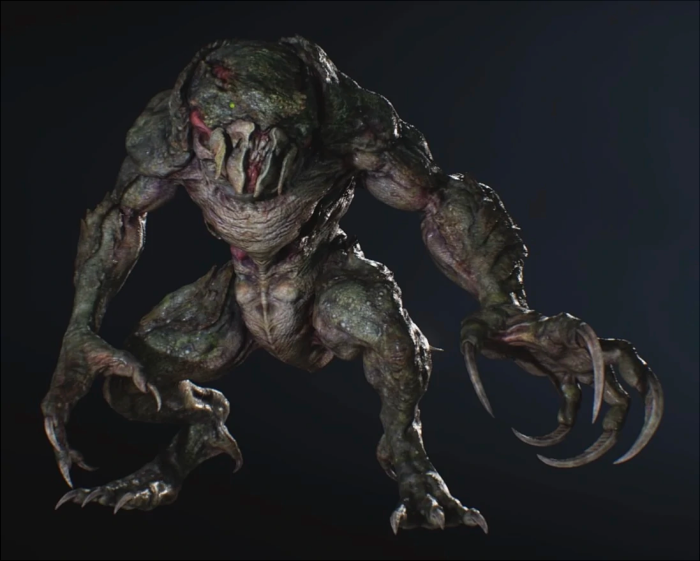 Not sure about this one. Can we really call it the same concept at all? The original Hunter Beta was a little more human-like, at least comparatively speaking, with nasty red tumor-flesh encrusting half of its face and body. It really gave an "imperfect" or "prototypical" impression that's kind of lost here, since this take looks like a completely healthy specimen of whatever you would call this. It's not otherwise bad, though; it's a hunter with armor plating that kind of reminds me of a snapping turtle more than anything else. 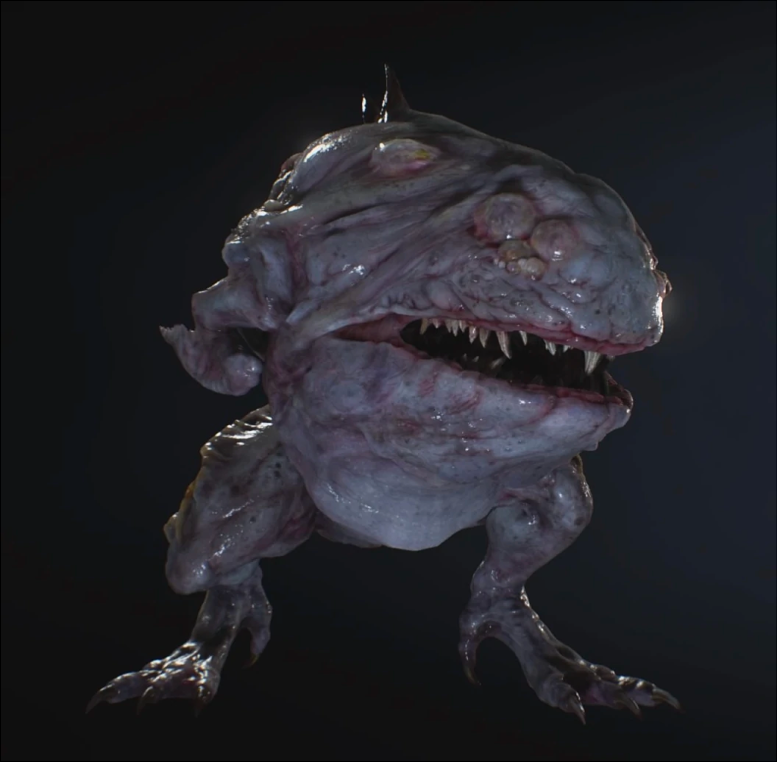 Finally one that I really like! I liked the original, too, and still do, but I'm definitely more fond of this baggy, blubbery sewer-toad. I might have kind of liked it without the addition of teeth, but those teeth aren't even actually part of a conventional jaw structure. It has a secret! 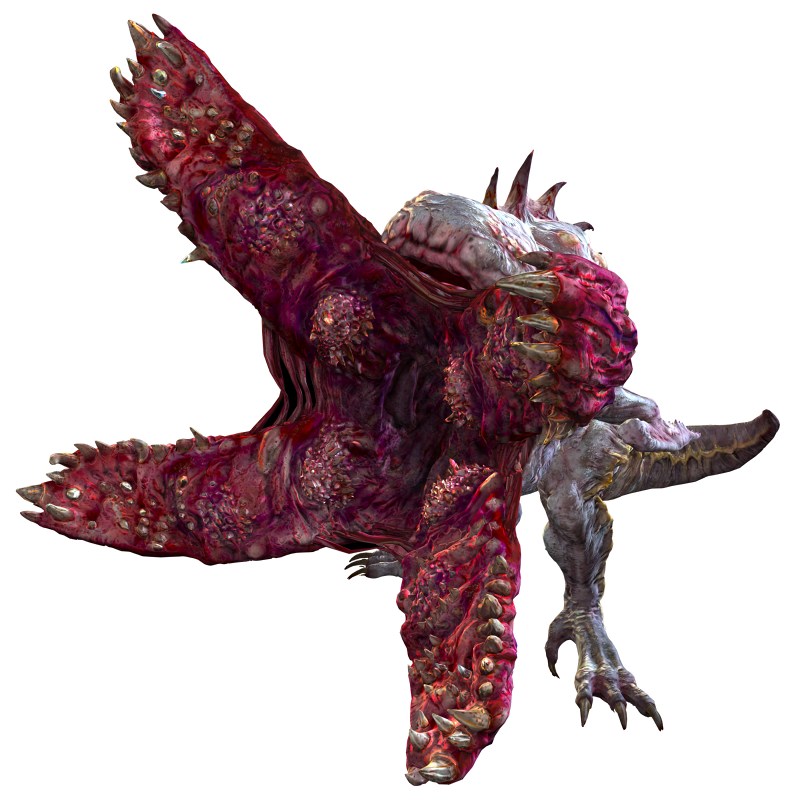 (Ripped by Tyrant0400!) The new Gamma's mouth opens up into four massive, flexible, tooth-lined petals of flesh, which is a pretty awesome thing for a big blobby frog monster to do, probably drawing from the way a real frog or toad attacks with its tongue. It's a truly terrifying thing to encounter in the sewers, but there's also a heartbreaking side to this, because a research note you can find in the game makes just one fleeting, passing mention of the Hunter Gammas showing "affection" for their human handlers. AFFECTION!?!!?? WAIT A SECOND. HOLD THE PHONE. Has it EVER been hinted even once before that any creature in this series is capable of being tame and gentle, even sweet?? I feel like they logically should, I mean, most of them are still just weird animals. Having it confirmed, knowing canonically that a toad made of rotten blubber might like being petted, feels like it changes absolutely everything. I don't even want to play a Resident Evil anymore. I want to play Umbrella Corporation Zoo Simulator. 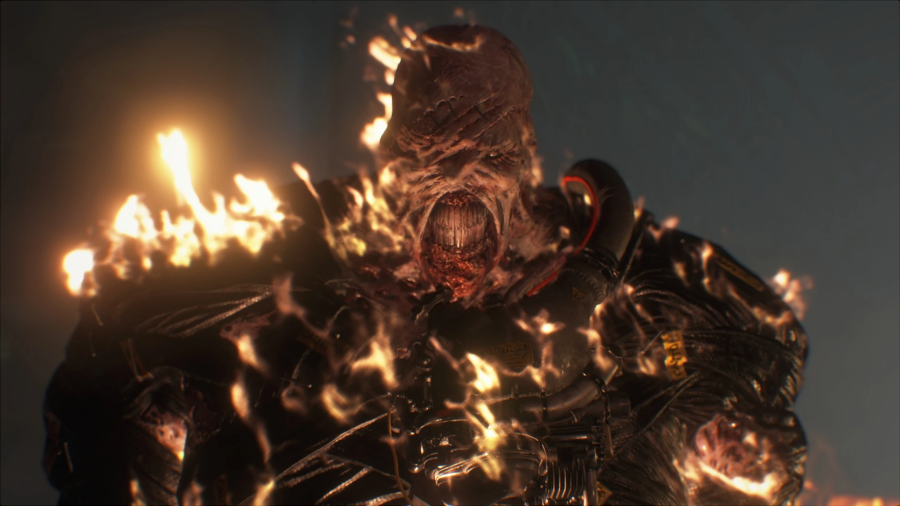 Sadly, that's about it for the new or remade creatures, other than zombies and animals. The giant worm boss known as Grave Digger is another casuality of the remake cutting room, so we're left with only Nemesis to review...and why in the world did they decide he should have a NOSE? Once again they made a monster's eyes tinier, too, and it's not like Nemesis had notably large ones or anything. The mouth is looking good, but that's about it. They really tried to fix something that wasn't broken here. 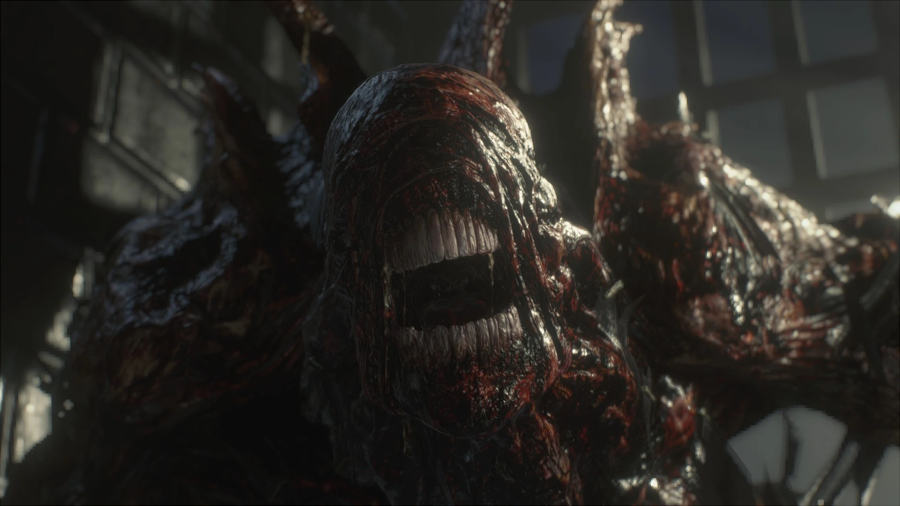 The Nemesis's first mutation form is a bit better. The rest of it is mostly humanoid, but the eyeless, thankfully also noseless face is much cooler looking, more dominated by the iconic lipless mouth. 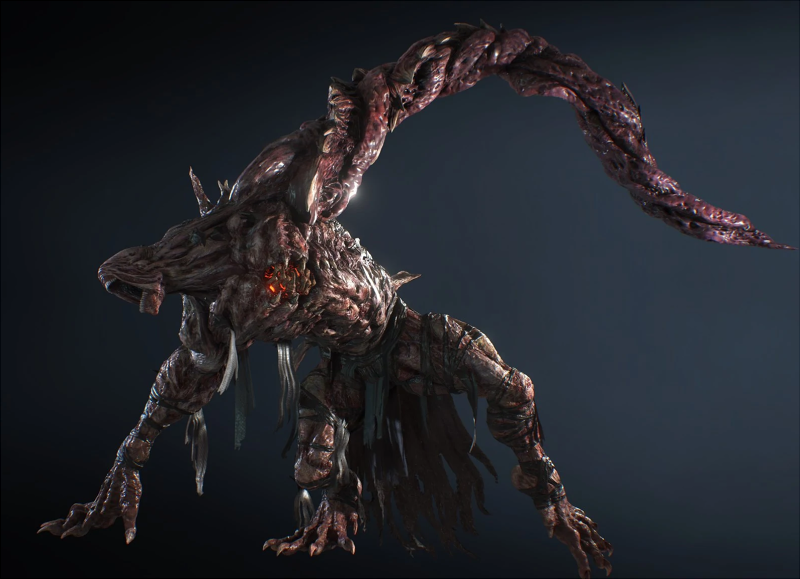 With Nemo's next form, you really get a sense that his last vestiges of humanity are slipping; that he's merging with the form of the parasite, his skeleton is degenerating and his body isn't even really recognizing the same up from down. Beautiful! Love the softer, stretchier look of the face and jaws. And then... 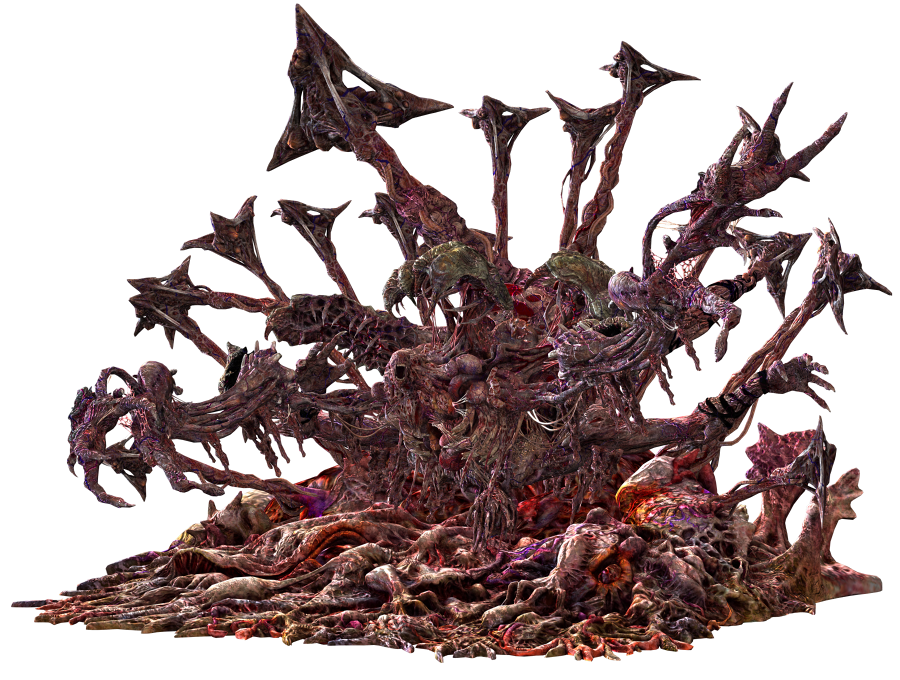 (Ripped by Tyrant0400!) Alright, they got me; I certainly liked the smaller, more pathetic chomping beak-slug that Nemesis originally devolved into, and maybe the convoluted details of this incarnation blend a little too much together, but I am definitely loving the details that do stick out. The weird looking tentacles are actually where it attaches to the surrounding room, the still-degenerating humanoid anatomy little more than the heart of a huge, fungus-like mass blooming outward into a bouqet of fang-lined flaps and pseudopods.

While it's a shame to have lost a couple of my favorite enemies, those that were reworked in this game feel a lot more interesting than most of RE2's rehashes, and perhaps a little more faithful to the "spirit" of the original designs even where they significantly differ. Even the nose added to the Nemesis feels a little better now, since it does add just a little more of a shift in humanity between that first stage and everything to come.