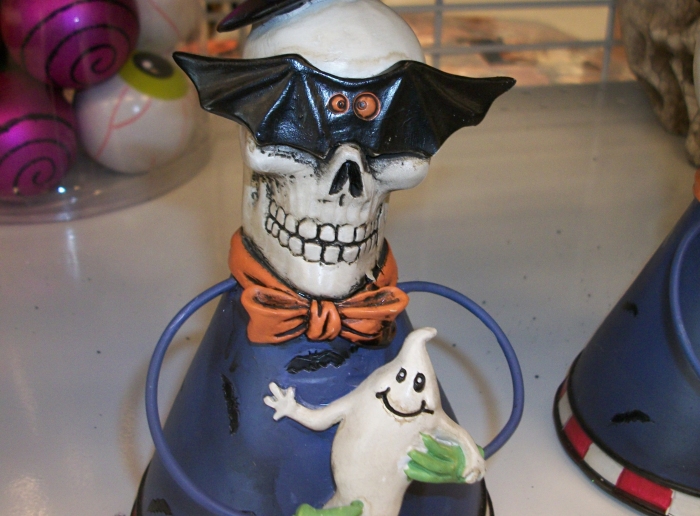 I recapped this only a few articles ago, but in the ancient year 2012, I spotted and passed up on these incredibly peculiar figurines that we subsequently gave their own name and a list of powers. Eight long years went by without a sign of them, but in 2020 (this year, if you're reading this in 2020, and if you're reading this in 2020, I sure hope things got better, right???) I found another, similar creature and finally put out a "bounty" on the real thing...which was answered within just days!!

Elsie Swann, who I've known around the internet for a while now, found a single Skilevak for sale online at a second hand store, snatched it up before anyone else could and mailed it to me in a whole box of other cool surprises! It's one of those things only I and a select few other people have ever or will ever care about, but it was an odd feeling finally holding one of these things in my hands after turning them into such a personal White Whale for so long...for a lot of reasons, and some of them a lot more serious than you probably think, which I'll get to in a bit. First, however, let's finally review one of these things up close, in case you still don't understand why I find them just so mesmerizing:

A bat-shaped mask is a well established image, and it has already been extended to Halloween figures with actual, literal bats stuck over their eyes. Is that the case, here? This object doesn't have any eye holes, and its actual, goofy little orange eyeballs wouldn't align with the eye sockets of the underlying human skull, so it only makes sense to interpret as a living creature. It does not, however, follow the anatomy of a real bat in any way either. It's just sort of a pair of black, leather wings with a pair of eyes. That's why I originally felt it should be a unique organ or symbiote to this entity, and I stand by that. I also have to say, I really like how the human skull is completely realistic in comparison to this "bat" and literally everything else on the creature.

The next remarkable thing about the Skilevak is its ghost. This skull-headed monster is just plain carrying an entire, happy, baby-sized ghost in its noodly arms. Just kinda presenting a disembodied soul to us, or maybe rocking it to sleep? It's not a particularly frightening ghost. It's not even wailing or moaning or in shock like so many other Halloween ghosts. It's just got a big old doofy smile on its face. Maybe it is being rocked to sleep, or otherwise coddled like an infant. Does a Skilevak always carry a ghost? I still think it definitively has to. I think that's as essential to its lore as anything else.

I've referred to a Skilevak as a "skeleton" before, but you know, it's only actually the head that we know for sure is skeletal. We don't see any other bones in the whole design, and the legs especially imply something stranger. Each leg is simply a chain of two giant eyeballs and a shoe...or at least one giant eyeball? The upper spheres are, in fact, completely blank white orbs on all sides, with no iris or pupil. Is it only the lower orbs that can see? CAN they see? I think so, but perhaps not in a normal fashion. Maybe the face bat can see for the Skileval in a normal way, but maybe the leg eyes see exclusively into the spirit world, or something along those lines?

The bat mask is just sort of cute and a little silly. Holding a ghost is one of those things that just almost makes sense until you stop to question it. The bat mask, the pet baby ghost, and eyeballs for legs, however, are the formula propelling this character to heights of madness other holiday decor can only dream of, and that's even before we tie it all together with its adorable bat-patterned sweater, or dress, or whatever the thing is wearing.

For those of you who can't find your own Skilevak however, Elsie not only found me the real deal but designed a functional, printable Skilevak papercraft model! Just right click and save either the full color or color-you-own model!

I said it was an odd feeling to hold one of these in my hands, but it's not just because it was once one of the few Halloween trinkets I loved that "got away" from me. It's also because of the real reason it happened.

When I first saw these things at a Ross, I was living with my soon to be spouse in dirty, smelly, sweltering central Florida in a stuffy, tiny side room of a parent's house. Yeah, all you people who joked that I was living with my mom in my mid-20's while I reviewed toys and cartoons and sometimes insulted people in youtube comments over global issues were correct. I had positively zero personal income, I actually bought almost none of the things you ever saw me review, and the reason I didn't buy this one was that I thought $7.99 was simply too extravagant for me.


Eight years later, I can photograph this ridiculous thing in the first apartment I've ever actually lived in by choice and would be perfectly happy remaining in, in relatively cool, rainy, shady, mossy Oregon, and I afford my half of entirely by the money I've come to earn entirely by writing articles like this, drawing monsters and selling artwork, not something I really ever thought would be possible or sustainable at all. It took nearly a decade, but I finally got a nice home ready for this dumb, nonsensical hunk of metal and plaster.