Most of you probably know what Fullmetal Alchemist is! It's a manga made by a nice lady that got turned into an anime two times. One time wasn't as good as the second time. It has a world in which alchemy is real and just a thing people do, but you're not supposed to use it to try and make people or bring back dead people. Naturally lots of people try to do those things, and it doesn't go swell! I'm going to skip most of the rest of the introduction and barrel headlong into this! 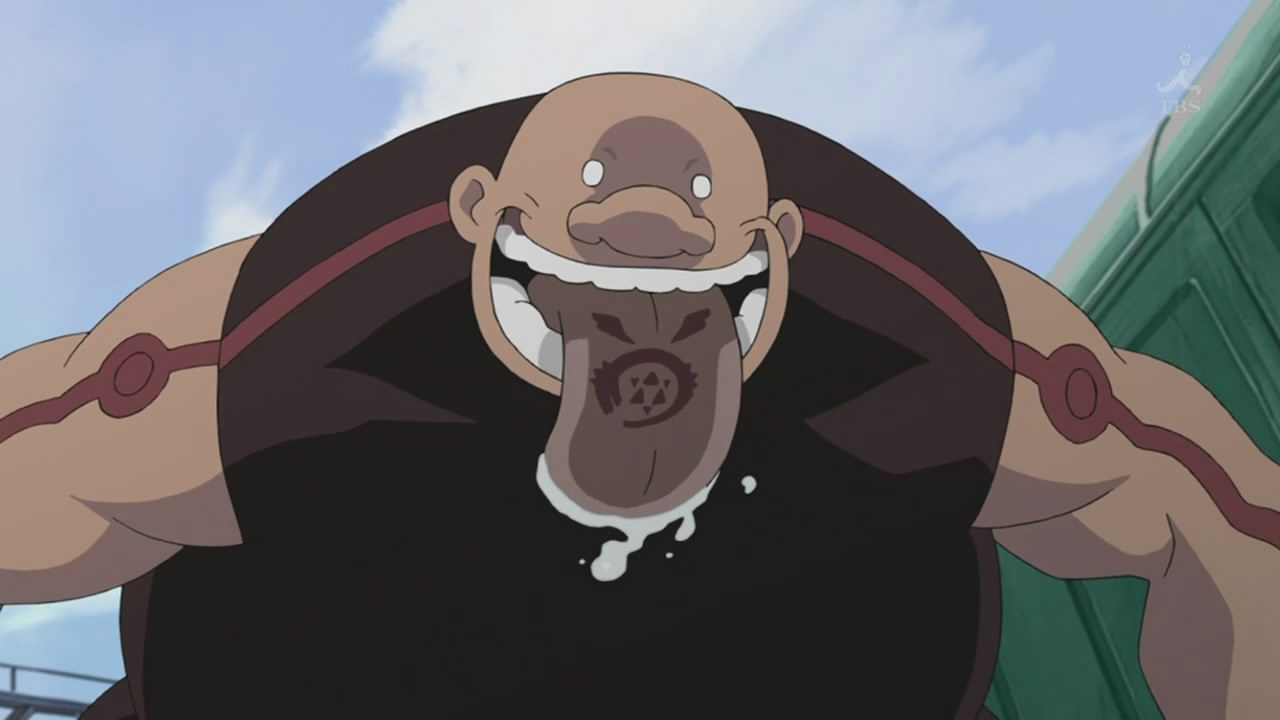 The Homunculi are seven weirdos who came from Alchemy and are named for the seven deadly sins. Gluttony is interesting, my second favorite of the bunch, for his terrifying ability to eat absolutely any material and particular appetite for human beings, made all the more disturbing by how goofy, childish and almost innocent he is. He's just this squat, round, bald cartoon man with a big round nose and a big mouth and those eerie, white dots for eyes and he can just kind of bite through a wall and then through your face like it's all made of the same butter. That's awful. I love him. 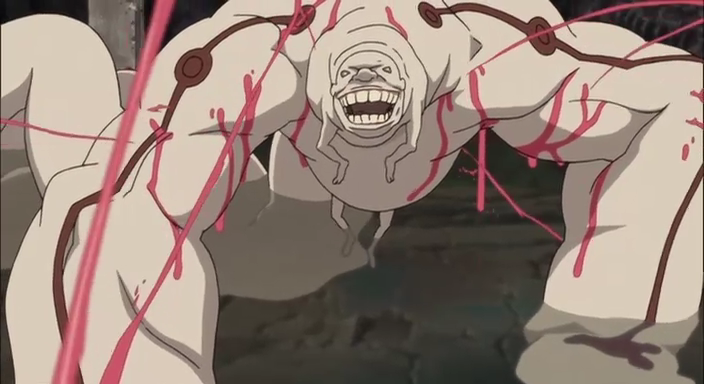 And I know I said the first anime series wasn't great, and that's because it wound up inventing its own storyline as it got ahead of the manga, but its movie spinoff revealed that Gluttony had continued eating, growing, and losing his mind after the series, becoming this huge horrible monstrosity with a dangling baby body, and that's pretty sick I guess. A bit over the top? 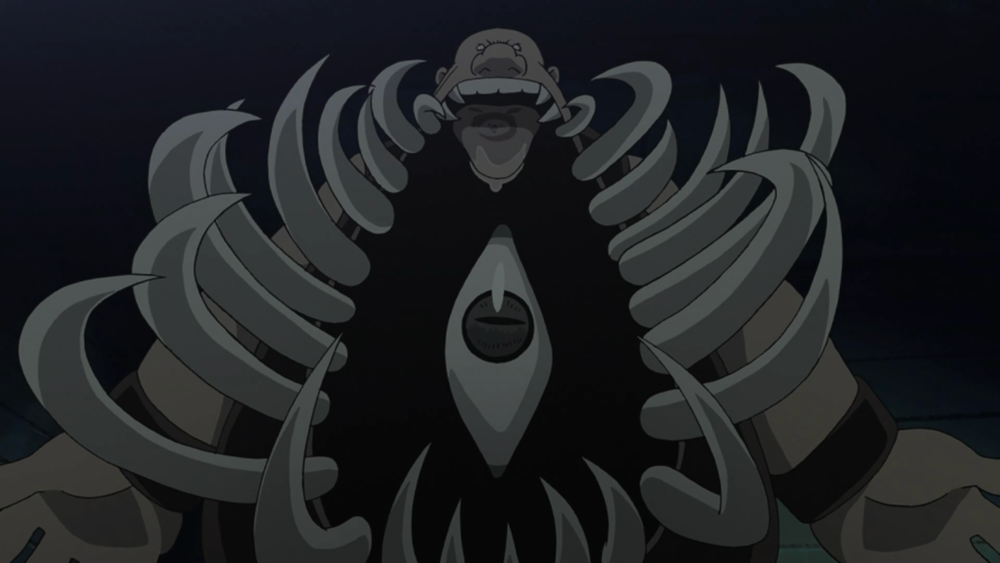 ...Maybe no more over the top than his official "true form" though. That first anime implied he just had some kind of corrosive saliva, but the Manga holds that he can eat anything because his stomach is a portal to an extradimensional space. When he opens his mouth "all the way," his entire front is just a single eye glaring from a black hole lined with giant, rib-like fangs, which is a pretty killer look. It's all the creepier that things in his stomach-void aren't even digested...the place is just one big pool of blood littered with everything he's ever eaten, chunks of architecture even spanning centuries. No end to this space is ever shown, and people swallowed whole simply wander until they starve to death. 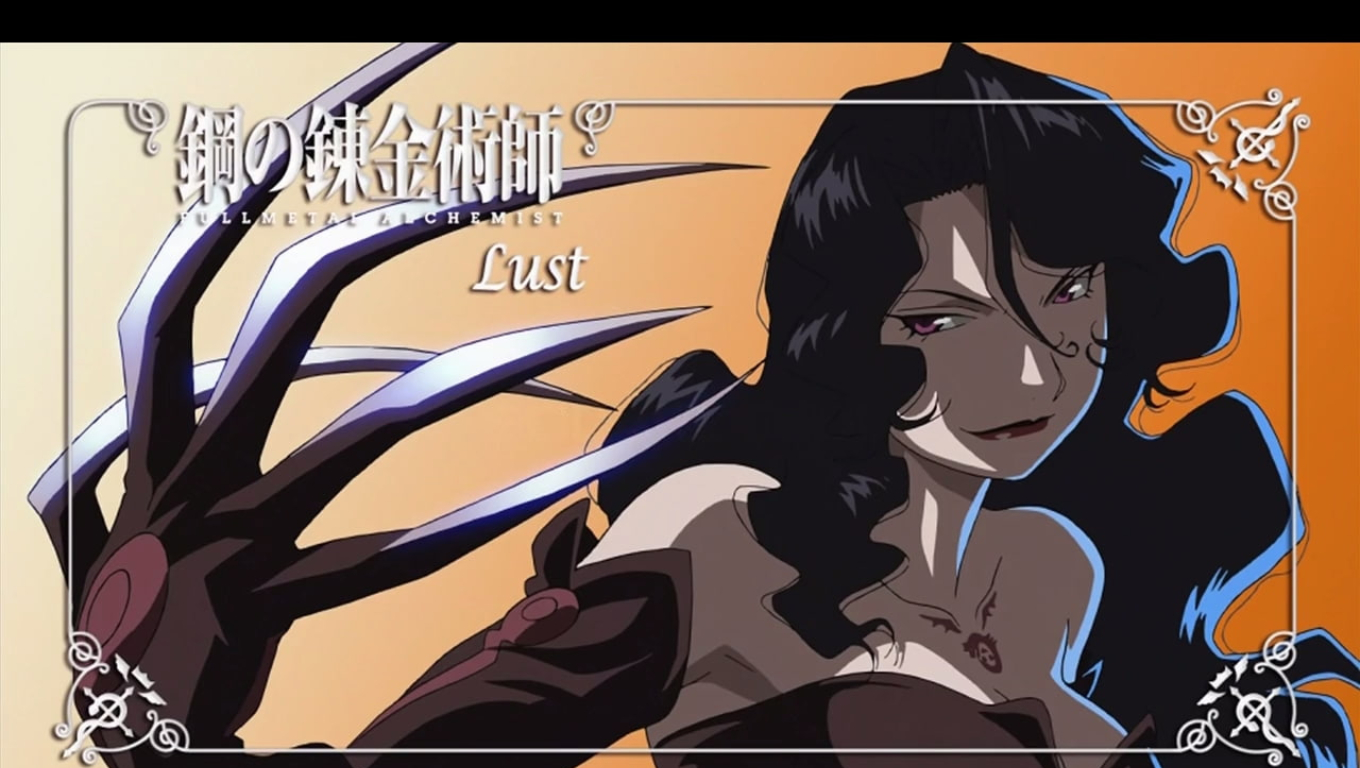 Lust is usually seen as a duo with Gluttony, and the two together are great characters - I love how sweet she can actually be to her weird, hungry little brother, who absolutely adores her in turn with an undying, childishly innocent devotion that makes the two feel sympathetic no matter how ruthless they can be towards humans.

As a "monster," however, Lust is unfortunately a bit lacking. Just making a Lust-based character look sexy is kind of the easy route, and she doesn't even exhibit any lustfulness of her own. Every other Homunculus is actually driven by its respective sin and has powers to match, but Lust is just someone with big boobs and extendable claws. They're VERY VERY extendable claws, like, she can stab you from down the street if she needs to, but I don't think that's a particularly lustful thing to do either.

I feel bad for saying that, though, because she only ranked 23rd in an official favorite character poll, tied with a dog. She deserves better than that. She's still cool, and she's nice to Gluttony!

UPDATE: a few people have pointed out that Lust is the most sadistic Homunculus and enjoys causing pain, so it's the "blood" kind of "lust," which makes sense, and I guess infinity-long fingernails tie into that well enough! Still, a lot of the others have more extreme powers than that. Even her sidekick has a singularity for an esophagus. 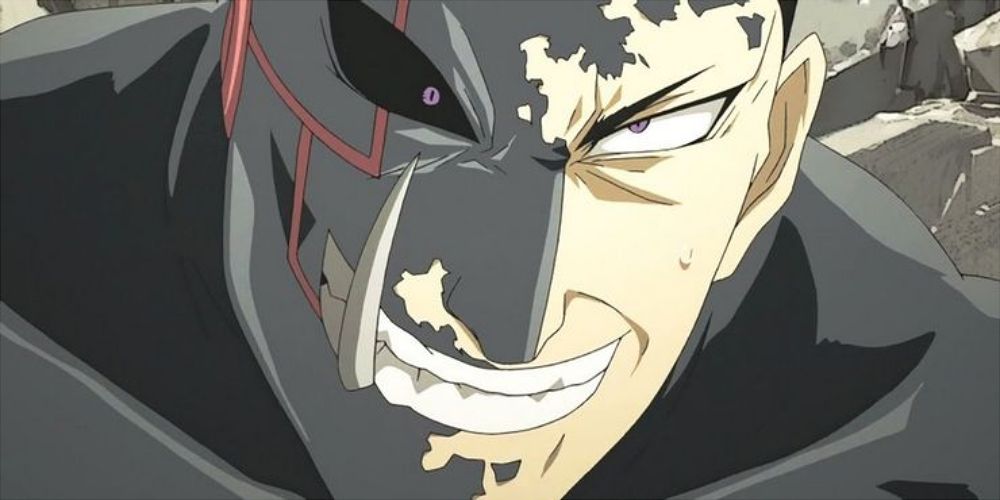 Greed is a pretty fun one! As a Homunculus, he's actually a bodiless force that needs a human to possess, or at least becomes one later, and naturally wants to possess a whole lot more than that. He has the obvious love of riches, status and luxury, but as his character develops it becomes more and more obvious that he's also "greedy" for validation and acceptance. He's lonely, but he won't admit it, always hiding behind an arrogant, selfish punk persona.

In possession of a human host, Greed can convert his skin to graphene as a defense mechanism, and I was going to say that doesn't seem like it has a whole lot to do with greediness, but google tells me Graphene is worth twice as much as gold right now. Huh. 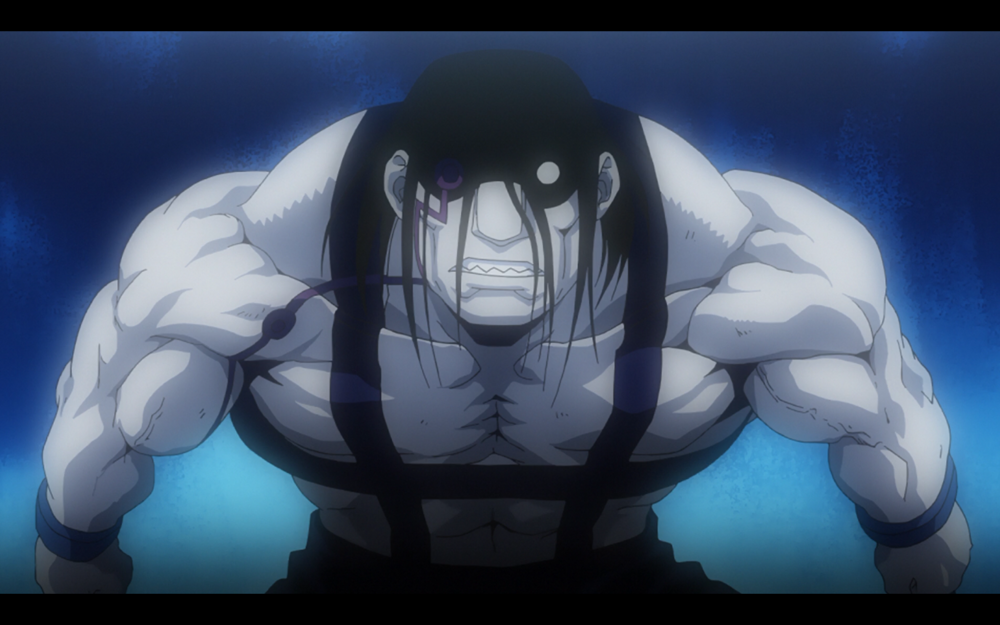 Sloth, appropriately enough, has the least screentime and character development of any Homunculus, and ranks as the least popular with fans. He also never looks like anything other than a really large, scary man, but I do think he's pretty interesting; his "Slothfulness" presents as an intense apathy to everything, including his own existence. Despite being obedient to any orders he's given, he complains constantly that even living is a "bother," and the only emotion he ever displays is a smile as he's finally killed. Intriguingly however, his signature power is that he can move faster than the eye can follow, provided it's in a straight line. He can zip from one point to another in a split second...he just hates it! 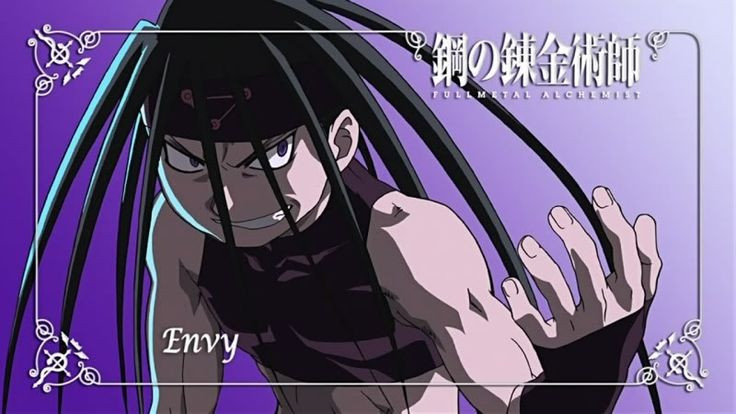 A fan favorite and mine too! Envy is a charmingly spiteful, egotistical and emotionally insecure little creep who can shapeshift to imitate any human form, but usually prefers the same scrawny kid. Regardless of form and despite being fairly agile, Envy seems to weigh thousands of pounds, and that's because the Homunculus is cramming a relatively massive amount of biomass into that human disguise... 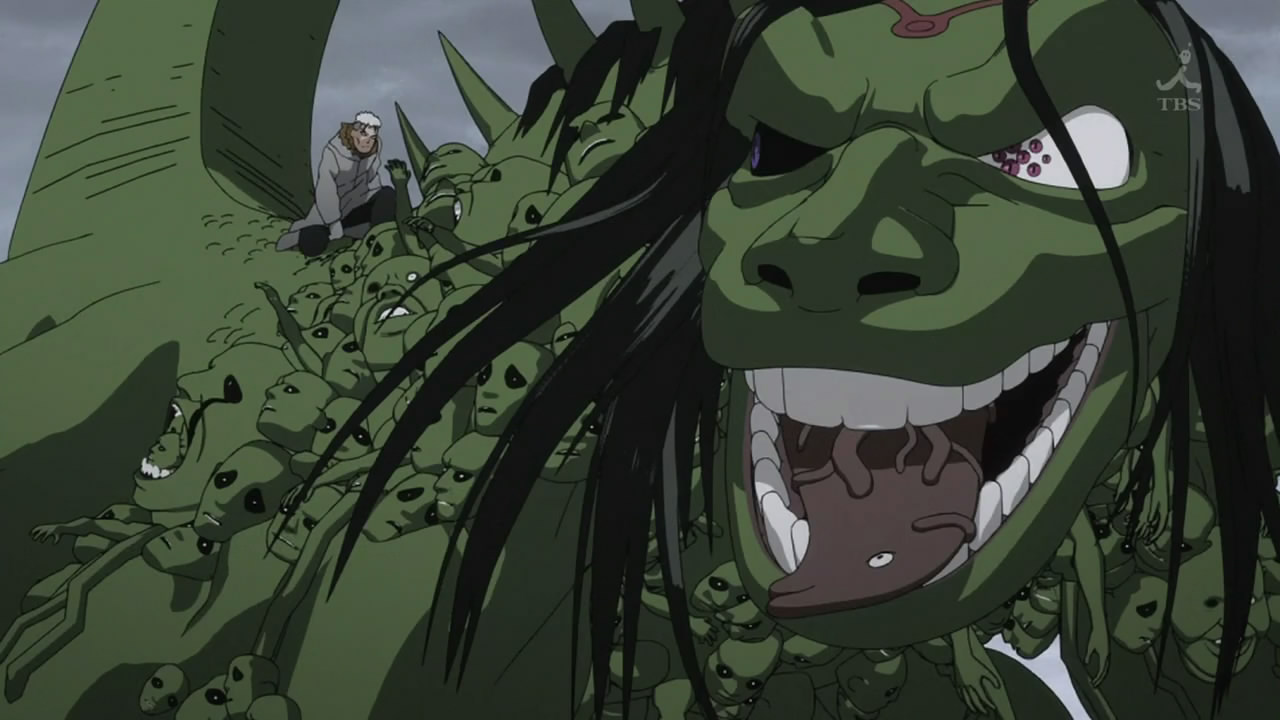 When not actively maintaining human form, Envy appears as an enormous, multi-legged green lizard with hundreds of human figures absorbed into its flesh, which individually wail in pain and beg to die, though Envy claims they're little more than mindless shells. The subtly human qualities of the otherwise reptilian head, especially that long greasy hair, give this design a lot of wretched personality, and the left eye with multiple retinas and pupils is a nice dash of even more abnormal weirdness. This is not, however, the very truest Envy! 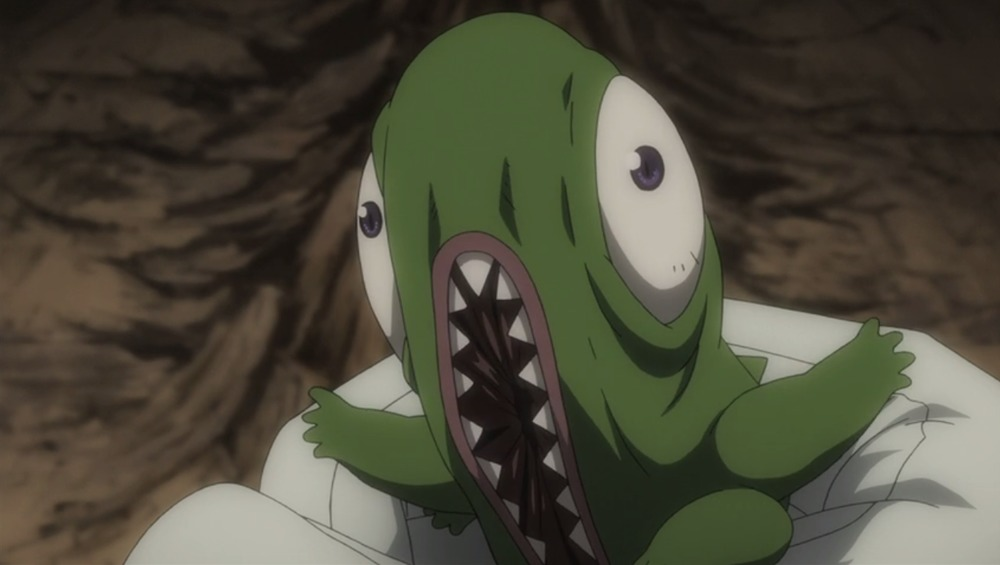 Envy is very fun as a character, but what makes them my favorite as a character and as a creature is its original and purest form, before absorbing so many people to build a giant dinosaur. The Real envy is TINY! A tiny, green, tadpole-like embryo with huge, fishy eyeballs and a vertical, lamprey-like mouth, in other words the single most perfect creature design that can possibly exist. Simultaneously threatening and pathetic, the squeaky-voiced little grub can take parasitic control of anyone by melding into their body, demonstrating how the development of its larger form can begin. Once reduced to this fearful and pitiful state, it's even harder to fault it for its villainy, and it's already a creature that can never help living in bitterness. It's made out of bitterness. it's unlike any other creature alive, terribly vulnerable and terribly alone, literally created from a personality flaw with no hope of ever living a normal, carefree existence. 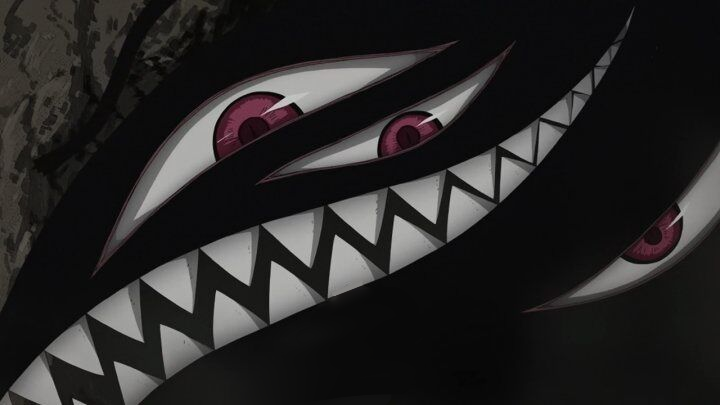 We're skipping Wrath because it's both the most "normal" human design and because its identity is a pretty big spoiler, but an even bigger twist is the human avatar of Pride, which I'm censoring right out of this image. Pride is the last of the seven Homunculi ever revealed and the second in command to their creator, an extremely lethal, sadistic entity with the expected superiority complex whose true form is a vast, formless black mass with many eyes and many gleaming white, toothy mouths, all contained within a highly inoccuous disguise it is very, very good at playing straight.

THE DWARF IN THE FLASK (STORY SPOILERS)

The last we'll discuss is the original Homunculus, once an adorable little ball of darkness with a single eye and toothy smile. This little creature was created in a bottle by an alchemist who combined their own blood with a tiny piece of a much greater entity referred to as the eye of God, which of course resembles the same eye seen in Gluttony, Pride, and the "Dwarf." The true nature of The Eye is never revealed at all - we don't even know if it really has anything to do with "God" in any sense - but it is momentarily seen by a few Alchemists through a gateway that may be the true source of all alchemy.

So just what happens when you combine a mere crumb of an all-powerful, incomprehensible force with human blood? The little fella is initially just like you or I, bursting with every recognizable human emotion and boundless curiosity about the world. Unfortunately, it's already human nature to keep striving for more out of life, and this is also a creature that went from being part of "God" to being trapped on Earth, in a physical form, and in a bottle. As friendly as he seems, he cannot bear that confinement at any level, and the more he learns about alchemy himself, the more he desires to not just escape his current form, but escape the physical laws of the universe itself. He doesn't even wish to return to the god-eye; that would only be another prison. He wants everything.

Even more unfortunately, the secret to greater alchemical transmogrification is to power it with a philosopher's stone, and philosopher's stones, in this setting, are created from transformed human beings. The more people converted, the more powerful the stone, so you can probably see the kind of terrible places this little guy's mind started going.

Seeking perfection, he eventually took a human form, but ironically became more alien on the inside as he attempted to purge himself of earthly desires. These he poured into the creation of the seven Homunculi, literally the pettiest vices of humanity given human forms just to help further his maniacal plans. 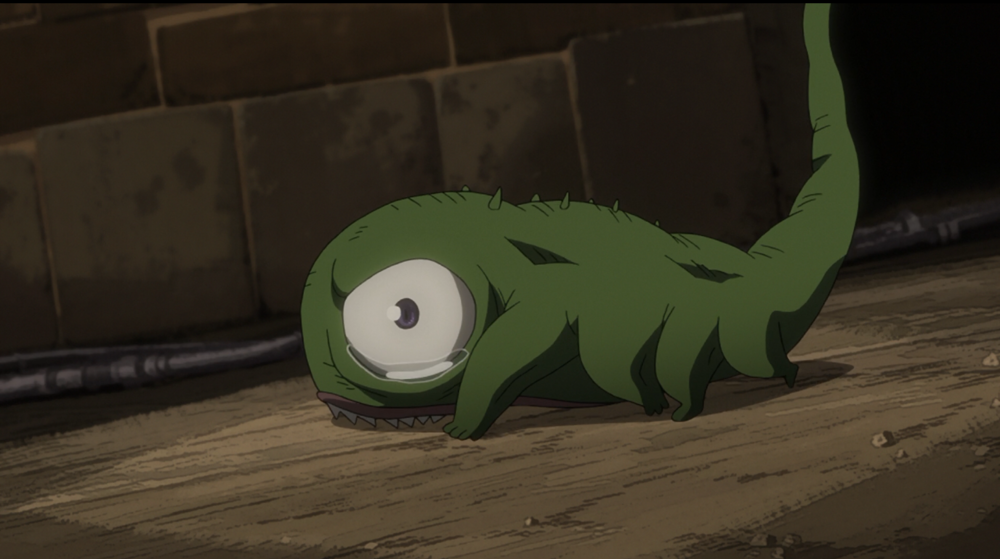 Again, it's hard to fault any of these beings for almost any of their behavior in the series. Each Homunculus knows it's an undesirable piece of their "father," created for selfish reasons in a mockery of human form, having no other purpose or place in the world. But even that father always felt sympathetic to me as well; what do you do when you don't want to exist, but still fear non-existence?

This was a somewhat short article by my standards, but I'd wanted to give these weirdos at least some little spot on this website for a long time. Even given their mostly humanlike designs, they're intriguing monsters with creative "paranatural" biology and many interesting twists on the usual "deadly sin" themes.