Little Nightmares was an immediate hit back in 2017, putting players in the role of a faceless, mysterious little child struggling to survive in an equally enigmatic world of horrifying and distorted giants. 2021 finally saw the release of a second game, actually a prequel story, and I think it's finally time I give this franchise some monster reviews, beginning with the first!

In the first game, these bony little humanoids are the first creatures you encountered after waking up in the huge, underwater fortress called "The Maw," and appear throughout the game as NPC's that sometimes guide your way. They're among the only friendly, or at least generally harmless beings in the whole setting, and live a mouse-like existence of hiding in the walls and plumbing when they aren't stealing food.

A grimy, conical hat completely covers the heads of Nomes, hence the name, but also evokes an old fashioned dunce cap. Their frail appearance, skittish animations and facelessness are such a pitifully endearing combination that it's hard not to sympathize with them at first sight, especially when they make timid gestures of kindness towards the player character. The fact that they're the same exact height, however, should ring some alarm bells as to what Nomes are, or at least used to be, and there are a few points at which they're seen to cast shadows in the shape of human children. Precisely what they are and why they exist, like everything else in these games, remains ambiguous. 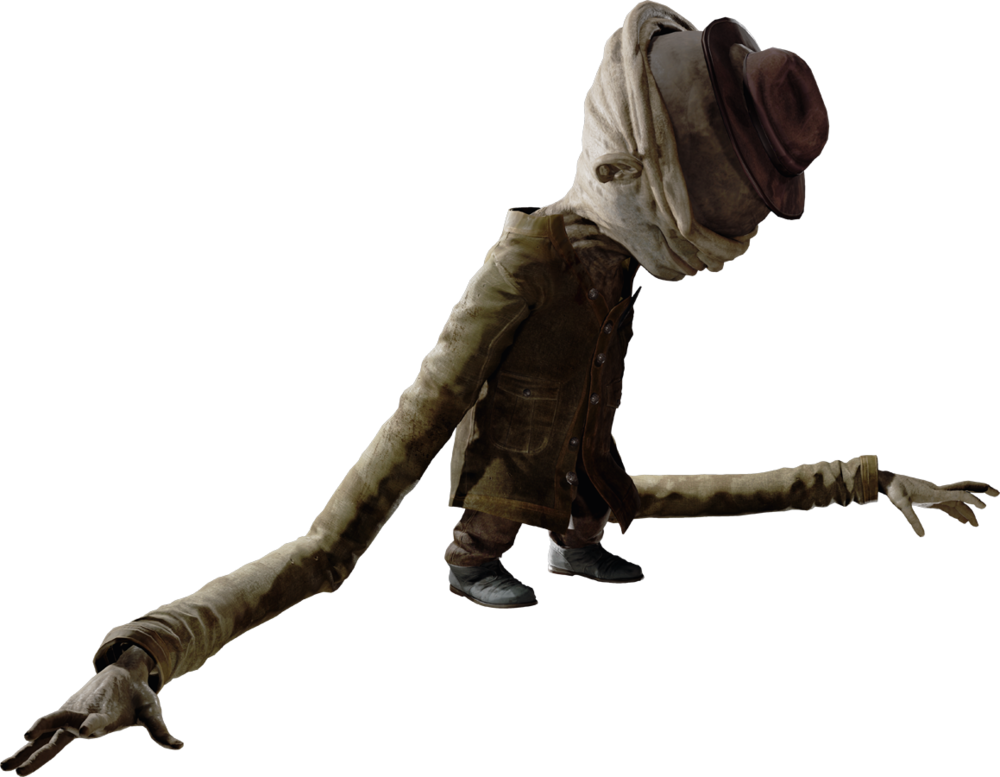 The first hostile humanoid we ever see is still one of the game's most monstrous. The Janitor, like all other humanoids, resembles an exaggerated caricature of an adult so unnaturally magnified that he can crush Six or one of the Nomes in one hand, which is even easier given his abnormally long arms, which bend at more than just their elbows, disturbingly contrasted by short legs and an oversized head. Most noticeably, the skin of the Janitor's face is rolled halfway down his skull, like you roll the top of a sock, and the skull itself appears to be smooth and faceless. It's a horrifying look, but it's also very funny that he wears a too-small hat on top of that fleshless scalp, as if trying to hide the "baldness." Lacking eyes, the Janitor navigates only by sound and touch, silently feeling his way around with those long arms like some subterranean arachnid. 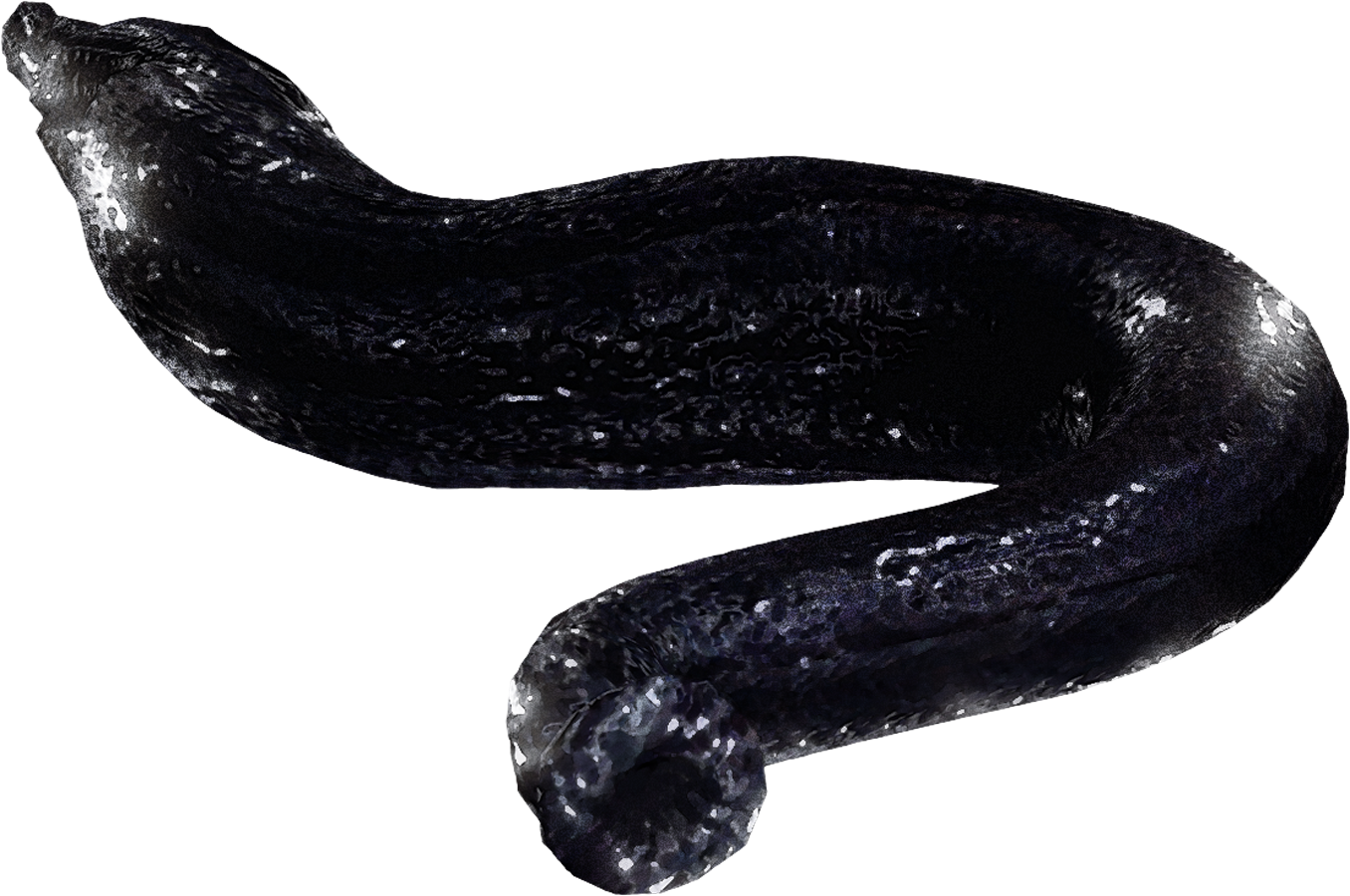 Oh yeah, there's giant leeches in this game! They're actually its only "minor enemies" in the traditional sense, slightly larger than Six animated with a fairly life-like undulating! 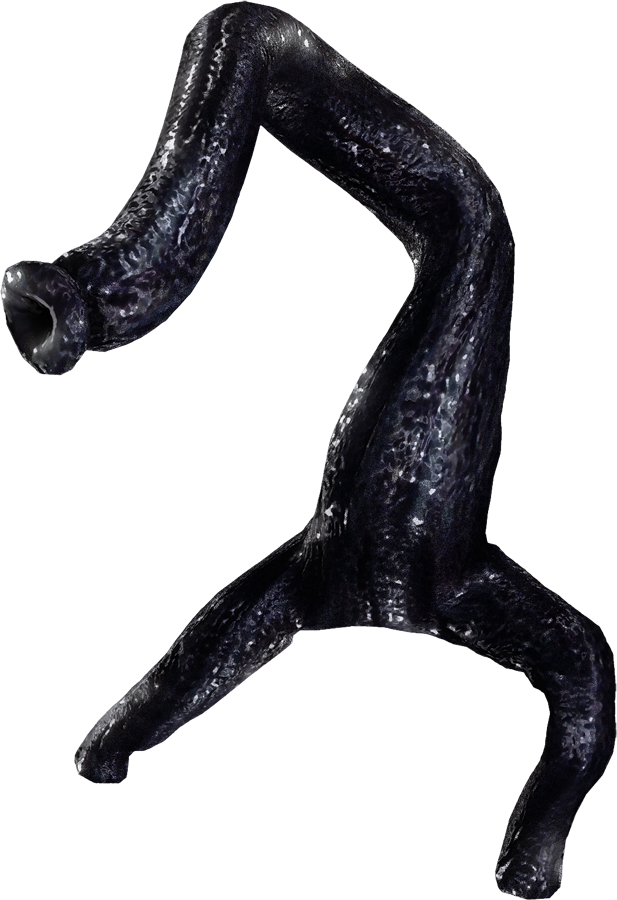 I do, however, prefer the early concept that gave leeches a pair of humanoid legs on their posterior end. These models are still in the game's files, and I can't imagine why they were deemed unfit for the final product, they're adorable! 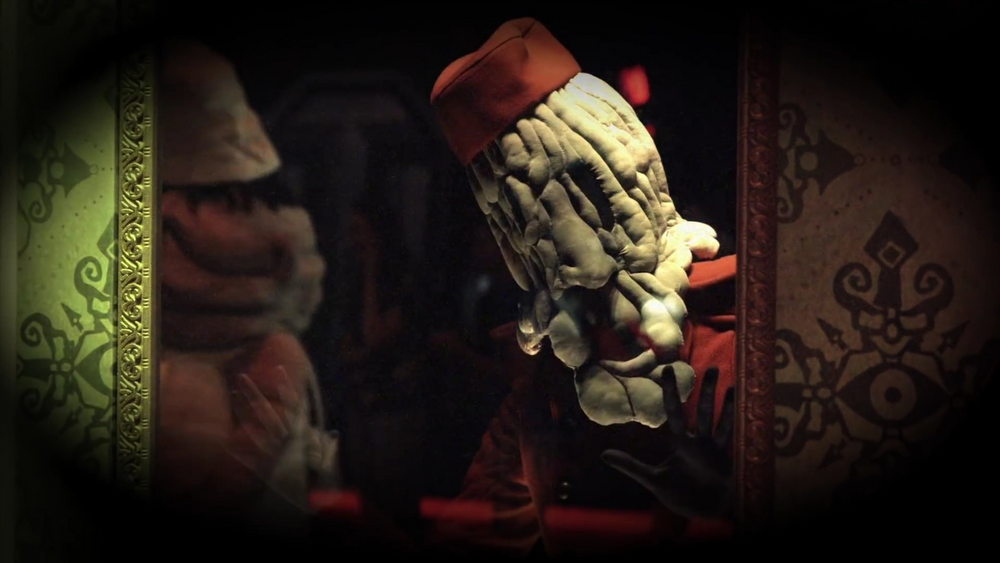 This poor guy doesn't get to appear in the final game, but a real-world costumed mascot was part of the game's early gaming convention promotion, so I'd like to consider him canon even if we don't get to see him in the final version. All that's known is that the Bellman would have operated an elevator, and his head would have looked like a column of half-melted wax. This would have made him the least human-looking creature after the Janitor, and I wonder if that might have been part of the reason he was scrapped? 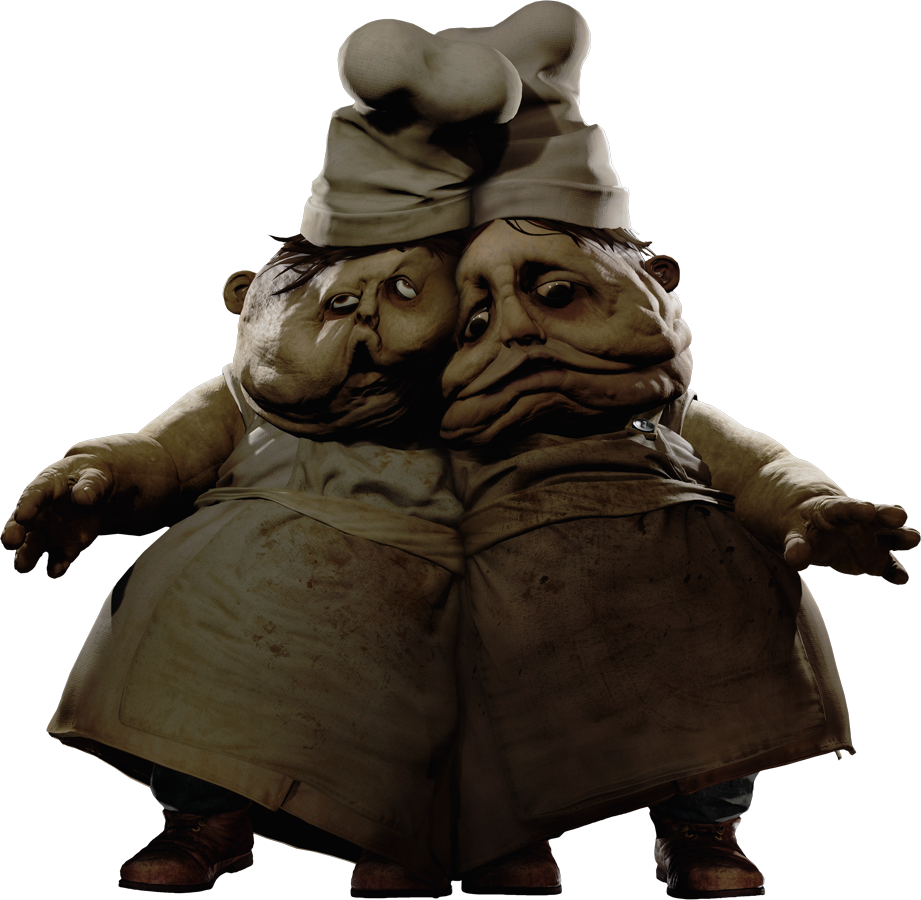 The Maw's two chefs are the game's most famous antagonists, a pair of brothers whose drooping, off-kilter faces also appear to just be masks. What we see of their true faces still appear mostly humanlike, but it's hard to tell if their eyeballs are a part of the masks or not. There's something especially dreadful about the toothless mouths of the masks, the unnatural way they pucker as the giants move around.

Why these creatures wear the masks of, apparently, only slightly different humanoids is the real question. Like the janitor, do their real faces actually lack a full set of human features? And what benefit would "disguises" have in this world? 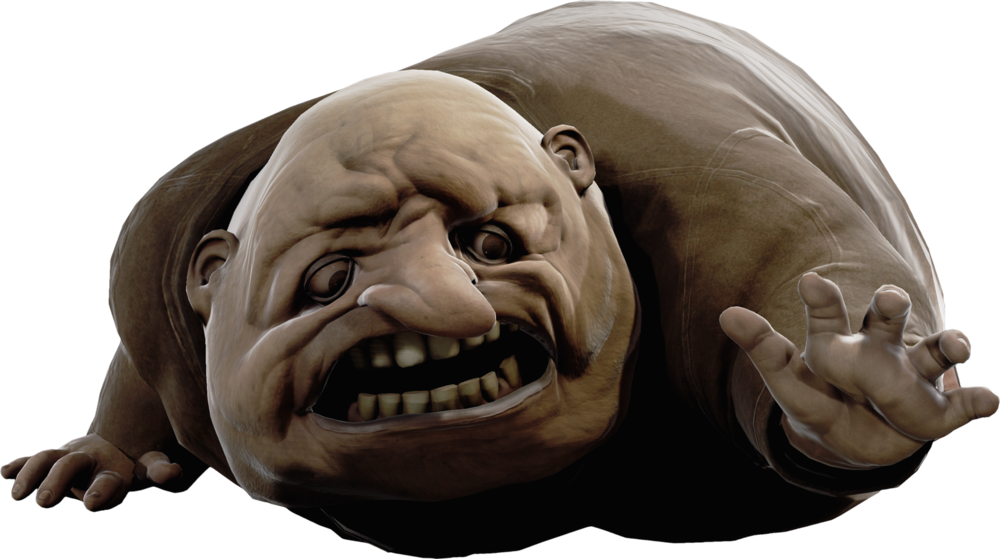 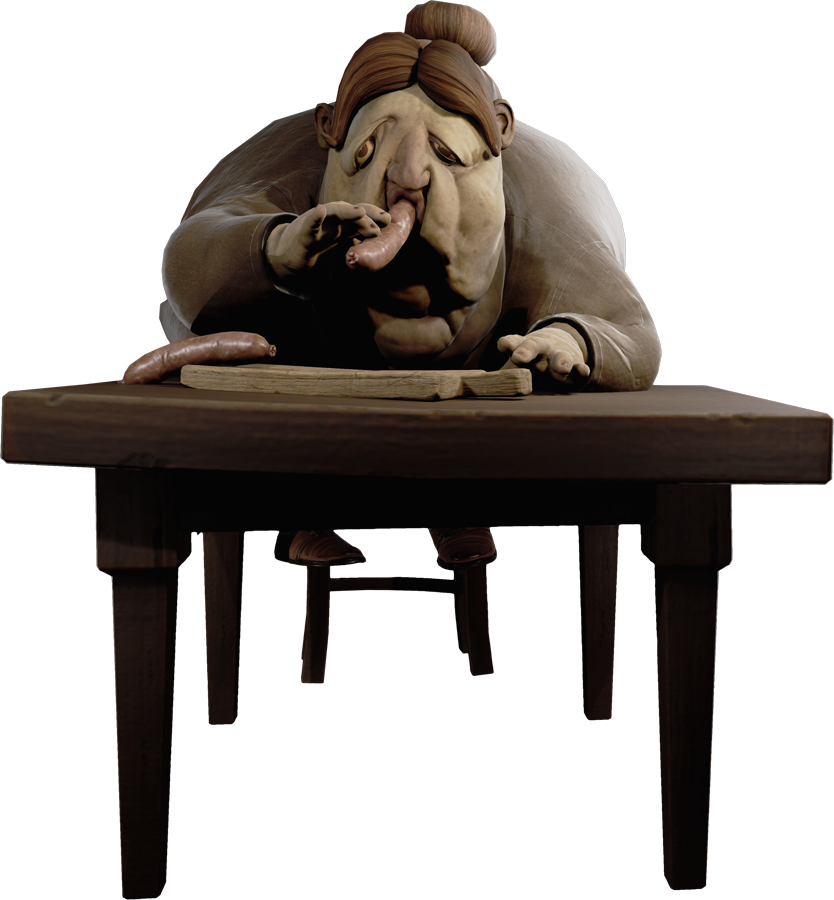 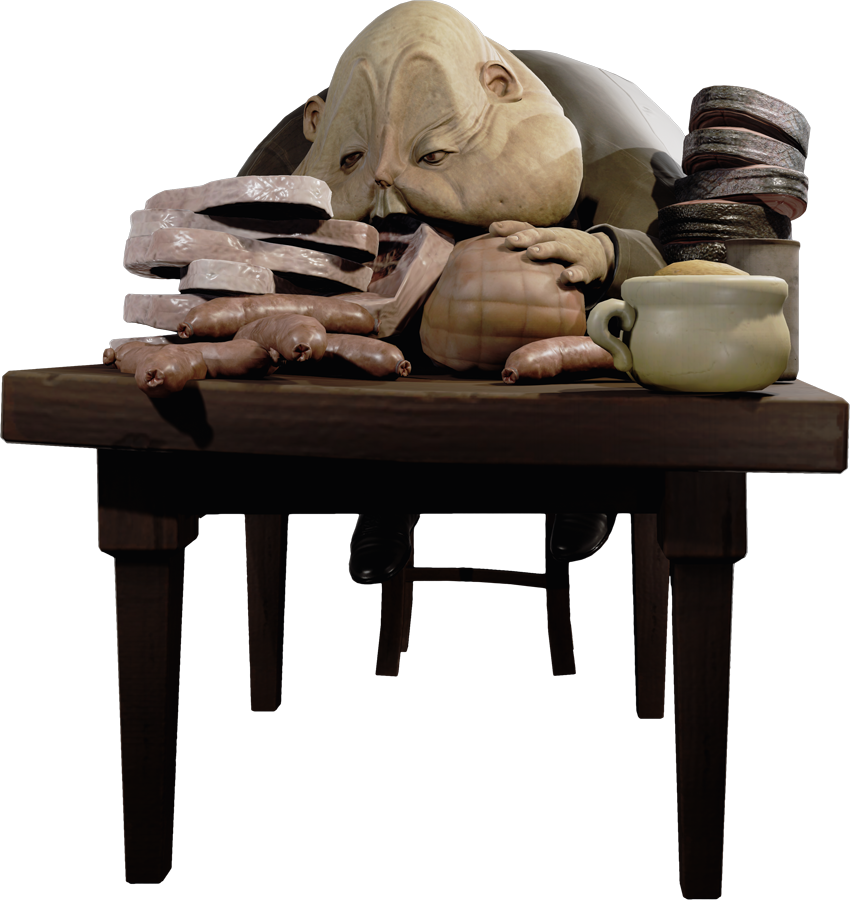 The answer could very well have to do with these poor buffoons, I suppose; the Maw appears to be a mobile facility, and equipped with a vast, luxurious dining area. Wherever it surfaces, people pour in to feast - huge, round, nicely dressed people who behave like mindless, hungry animals as they stuff themselves with meat, and as you might have guessed, will attempt to snatch up any little children they might catch scurrying around.

These beings are genuinely pretty terrifying; their abnormal proportions with immense, dopey faces, lumpy flesh sagging like unfinished clay models, really does feel straight out of a childhood nightmare, which I actually say from personal experience. They also have the look and feel of characters from an old political cartoon, or even the earliest Alice in Wonderland illustrations. The awkward way they trundle around and grope for food is unpleasantly baby-like, and the way they obediently pour into the Maw deliberately evokes animals on their way to a slaughterhouse, which is precisely the kind of thing going on here, actually...

The game's main antagonist, The Lady is a mysterious figure in a kimono and a white mask who is apparently in control of the Maw and derives some form of sustenance from the guests, implied to be some kind of essense or energy she can siphon from other beings. She's also, apparently, capable of transforming children into the Nomes, possibly after absorbing their energy, and he power is said to be what keeps the maw's machinery functioning at all.

The Lady is the only adult in the setting with a youthful appearance, her real face not all that different from her mask in the game's 3-d files, but her reflection appears elderly, and in conceptual art even a little decayed.

Unfortunately, I feel this is a weak point in this game's storytelling. A villain motivated by an obsessive preservation of their youth or beauty is a cliché that feels oddly out of place for the weirder, grodier horror of this game, and I would have actually found it both scarier and more surprising if this elegant figure was just a flesh-eating or blood-sucking cannibal. A question that remains intriguing to me, however, is whether she really controls the Maw or vice-versa, in which case she would simply be the "feeding apparatus" of some greater, still unknown entity.

We get a little further insight into entities like the Lady in the DLC Secrets of the Maw, since this monster is implied to have been the Maw's previous "Lady." Her gray-green skin and uncanny face are somewhat typical of elderly ghouls in popular culture, but what makes her stand out more is her weird behavior, since she lives entirely underwater in the Maw's sewer-like depths. I guess that calls back to the carnivorous water hags in fairy folklore, but that was always a fairly under-appreciated source of horror itself. The idea of a humanlike entity just lurking in water to eat people is one I think we take for granted these days, something we're too accustomed to with all the merfolk and fish people in our media, but it's even creepier when the humanoid in question has no obvious aquatic adaptations; essentially just a sunken body that eats.

The Lady, then, might just fear her "retirement" above all else. She knows that when her body and mind begin to slip, she'll have to be replaced, or can be replaced as easily as she replaced "granny," and spend the rest of her days as mindless and ravenous a creature as things ones she's been preying on.

Little Nightmares is overall an interesting premise. "Giants" were a common theme throughout older fairy tales, giant people with giant homes full of giant furniture and giant cutlery who also just so happen to eat regular-size people, and it's odd that such a hideous notion came to be seen as such a silly and childish one over time. Little Nightmares is basically Jack and the Beanstalk presented as disturbingly as it really would be, though it also draws a lot from how frightening our everyday world really can be to a tiny child.

For whatever reason, I myself was paralyzingly terrified of unknown adults when I was small. Maybe it was all the "stranger danger" propaganda the media threw my way, and that the adults I did know all bought into it as well, but I can actually remember being less than five years old and thinking every random, passing adult could be the one that wants to "steal me" or "get me" or otherwise harm me in some ambiguous fashion, and as a child plagued by intense nightmares and night terrors, that did indeed cross over into dreams about distorted, sometimes immense people who also just sort of wanted to "get me" in some way.

I always felt there was a bit more they could have done with this game, but we'll talk about how well the sequel delivers soon enough.