Some creature renders captured by Tyrant0400Tp

The sequel to Little Nightmares only came out in 2021, and despite being referred to as a sequel and even titled like one, its story seems to be more of a "prequel," putting you in control of a tiny boy who befriends and guides Six from the first game. Taking place on the mainland rather than the seabound Maw, we find that the rest of this world is just as distorted and hostile... 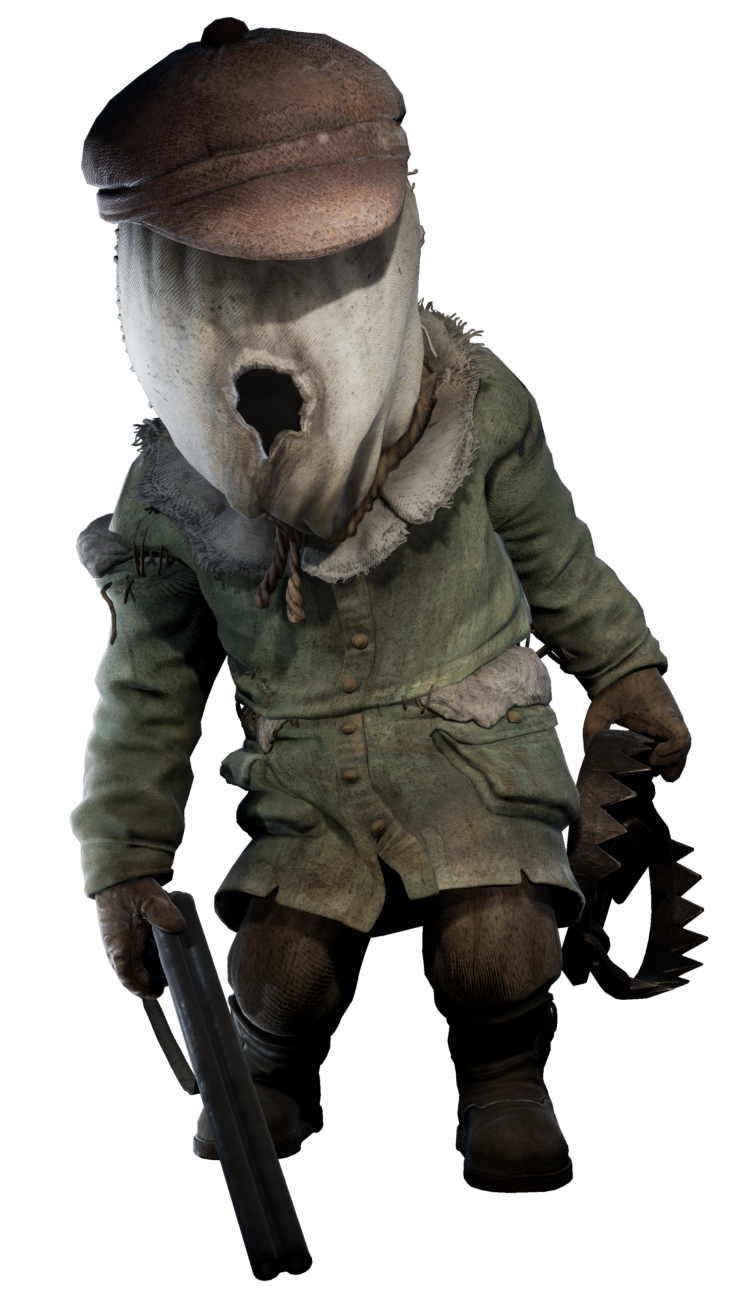 The first enemy giant is a hunter who lives out in the woods, with a sack over his head. We never get much of a hint as to what he really looks like, but there's only one eye hole, and the pants and whines he emits remind me more of an animal than a human. 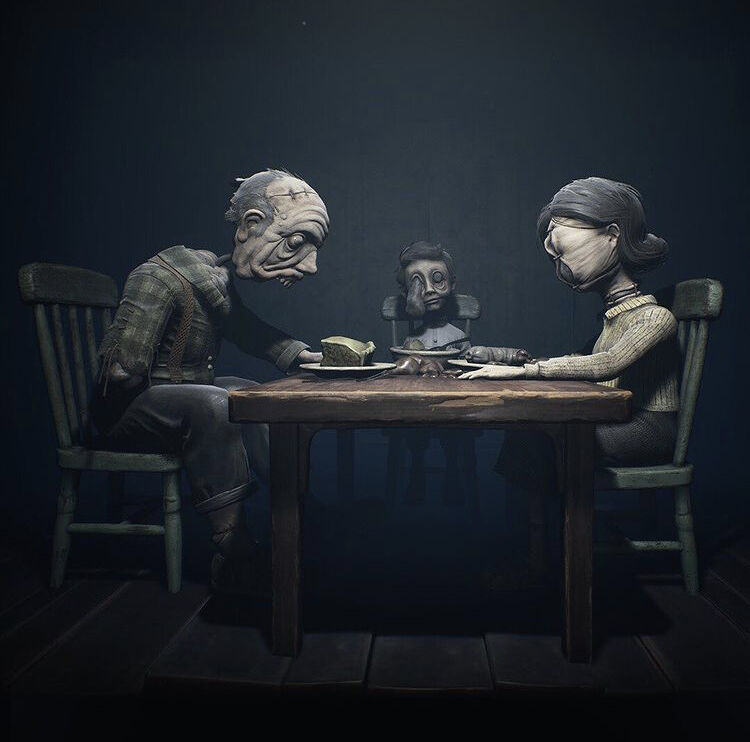 What's especially noteworthy about the Hunter is that he appears to prey on his "own kind," with other giant beings poorly taxidermied throughout his dusty, rickety home. It's also interesting that there's a giant-sized child here...so do these huge beings have huge kids, distinct from the tiny ones the player takes control of?? 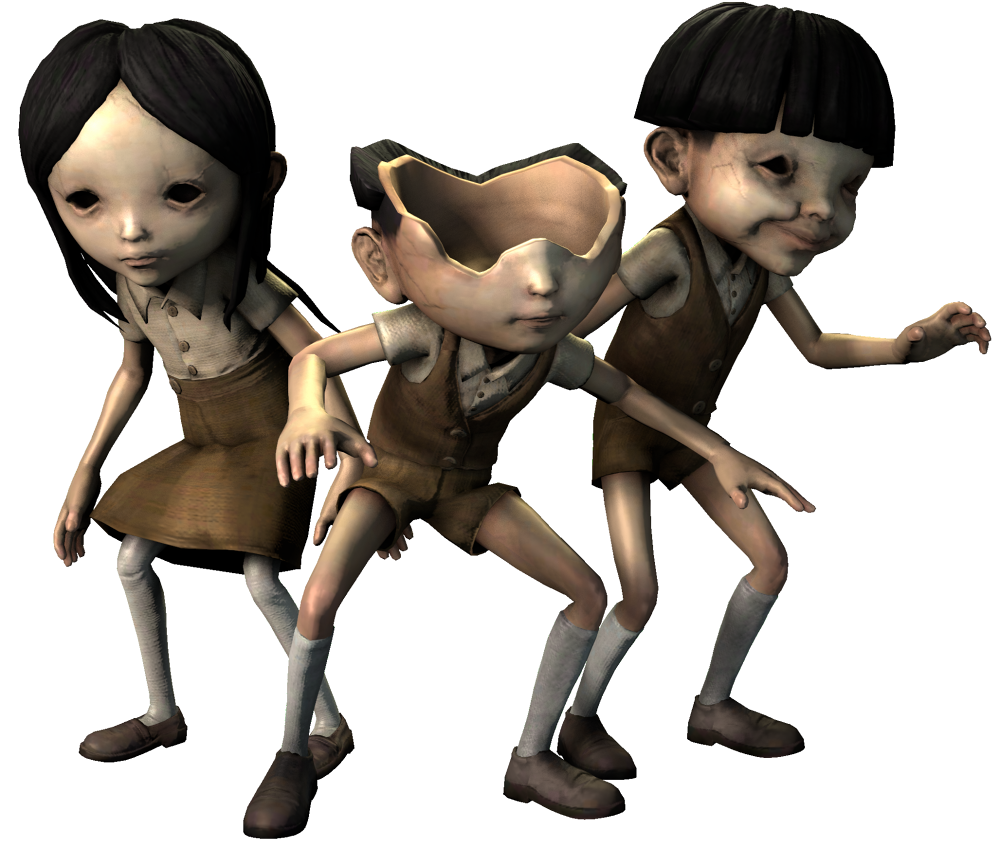 That question is not answered by the "children" inhabiting the elementary school, which appear to be more like plastic dolls than humans; dolls with disturbingly hollow, sometimes broken heads. They're another horrible exaggeration of something real kids might come to be afraid of, forming a chattering, destructive horde that will physically beat the player to death the moment they can catch them. The empty heads feel symbolic of the sheer thoughtlessness behind their violence, and maybe that's a bit on the nose, but it's still a fantastically creepy image. 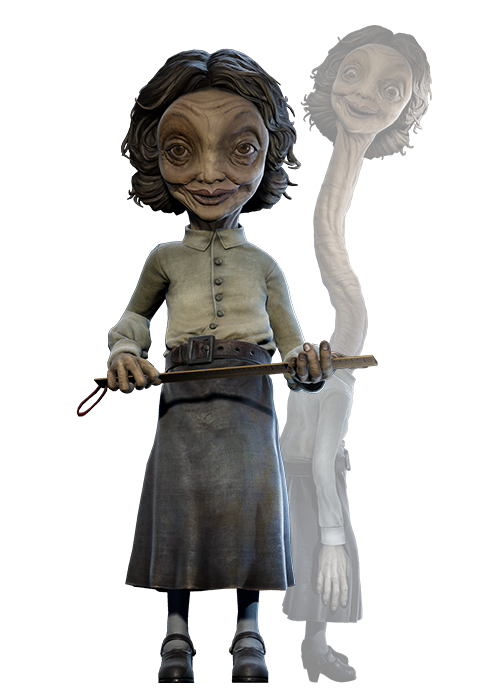 The elderly teacher of the school is fascinating, because in her default state I actually don't think she looks all that creepy; her face is "wrong," yes, but in a way I think is kind of charming compared to other giant beings. If she wasn't ruthlessly cruel to both her plastic students and real children, she could easily be endearing...but when she hears teeny, tiny footsteps intruding into her classroom, she quickly becomes one of the most bone-chilling entities in either game, if you ask me:

I think it was deliberate that the teacher have a more "normal" visage than we're used to, with no sagging flesh-mask or rolling eyeballs, to make it all the more horrid when her sinuous, seemingly endless neck snakes out of her torso, like a Rokurokubi, to chase us even through mazes of ductwork.

And that look on her face...the wide-eyed, sweetly delighted smile, like a kindly grandma was just surprised by her single favorite treat in all the world, which regrettably seems to be precisely how she feels. To top it all off, the very movements of her head and neck have a certain jerky quality the animators just had to have lifted from watching long-necked birds and reptiles hunting for prey. If you've seen enough nature videos, you'll know exactly what I mean. Even if she never had the long neck, those motions and expressions would have made her more than unsettling enough. 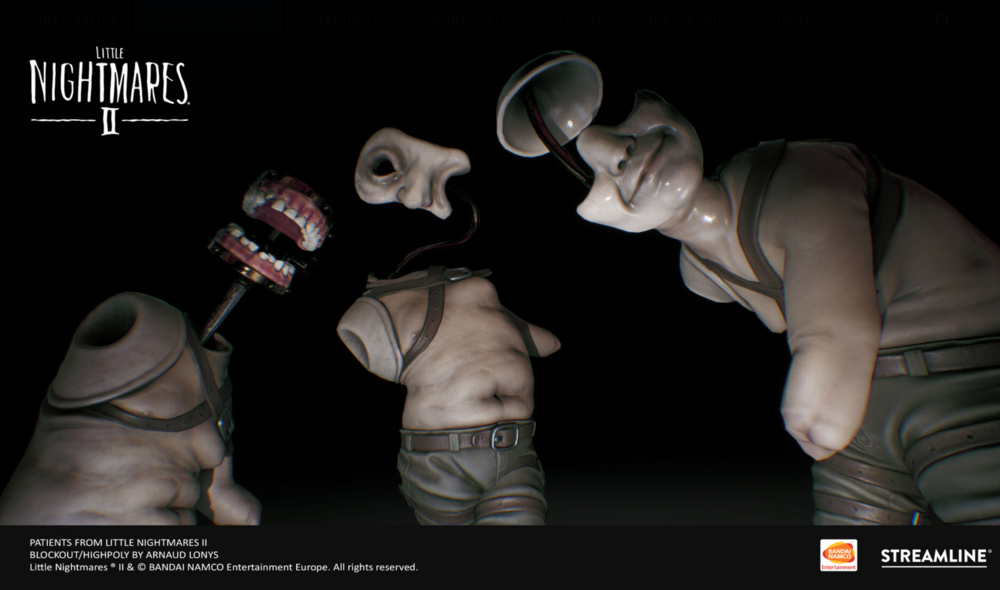 Following the school, we find ourselves in an old hospital, littered with strange figures pieced together from antique-style prosthetic limbs. Of course many of them are alive, and they only stop moving if you shine a light directly on them, leading to one of the game's most harrowing and difficult sequences when we must navigate a room packed full of the jerky, clattering dummies.

Some of these beings are headless, some have only chattering dentures where faces would be, and others have partial upper or lower heads...all made from the same materials as real, early prosthetics, but of course prosthetic heads and torsos were never exactly common, or generally possible in our own world.

Another common enemy in the hospital are prosthetic hands all on their own, scurrying around like spiders, but I'm going to consider them the same "species" as the larger patients. 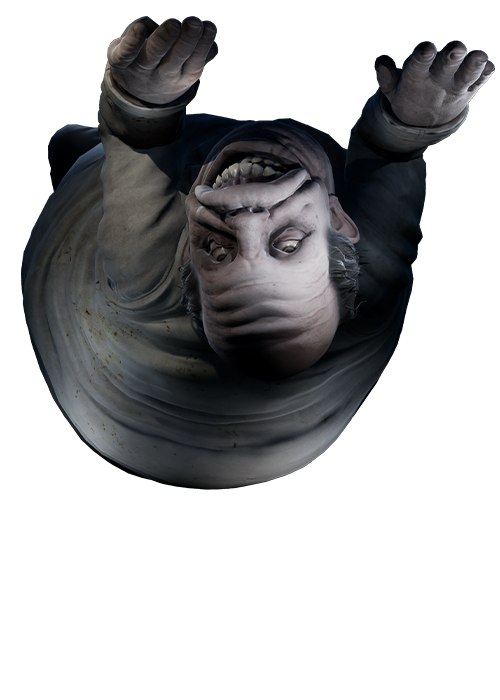 The prosthetic patients are actually assembled and maintained by a fully living monster doctor, a big, bloated, hump-backed man whose pale, puffy face seems like another of the flesh masks worn by creatures like the Twin Chefs. More disturbing is the fact that he crawls around on all fours along the ceiling, and makes almost ape-like sounds. 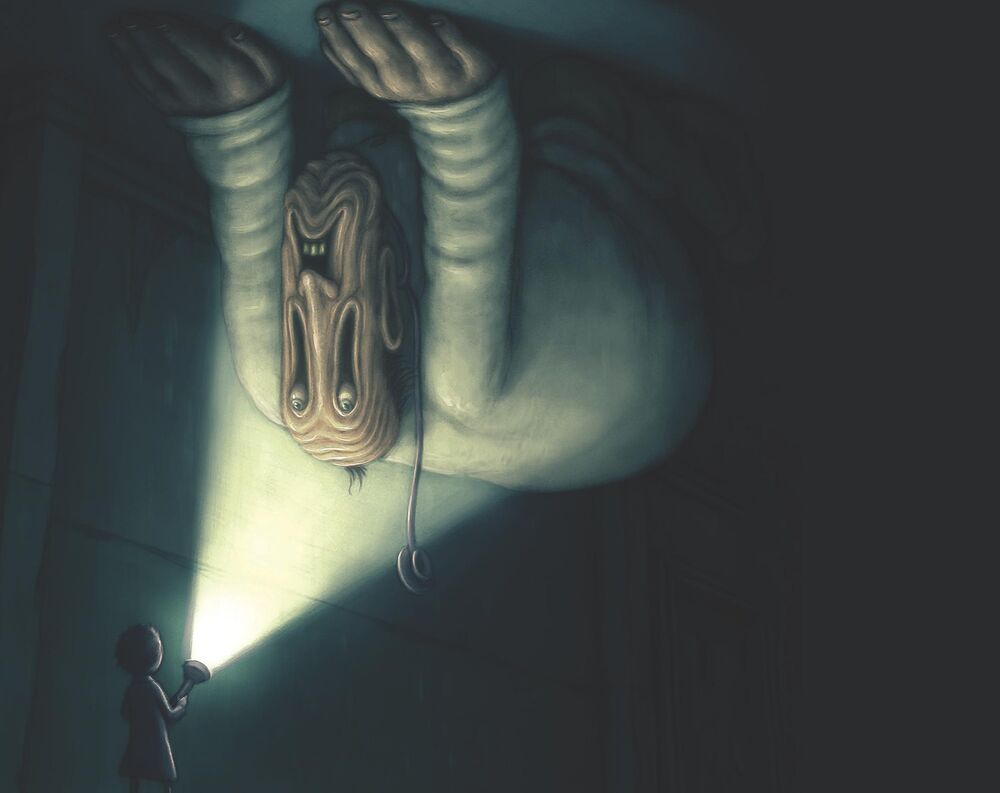 Unfortunately, I think they dropped the ball here by not sticking with the doctor's early concept art. Here, the upper half of his face would have drooped and hung like putty off his skull, and his eyeballs would have gone with it. It would have been marvelously horrible to see that dangling scalp peer down at us, especially if it could just keep stretching down to our level! 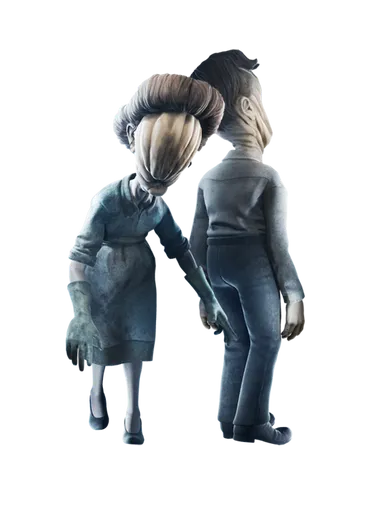 The next area of the game is a series of dark, damp apartments, where we actually have to use scrambled televisions as teleportation portals, but several of these are impossible to access without catching the attention of the local residents. Dressed in suburban 50's fashions, these looming men and women are drawn like moths to the nearest television sets, even if they're only displaying static, which is even creepier for the fact that none of the have eyes...or mouths, or noses. Some have shallow, twisted depressions where their faces would be, almost ear-like, while others have stretched and puckered masses of flesh as though the television screen has long been pulling on them.

If you get between a viewer and its precious shows...or turn off their television...they'll emit a dim glow and distorted, electronic thrum from their single facial orifice that seems to paralyze and kill us by an indeterminate mechanism. Radiation? 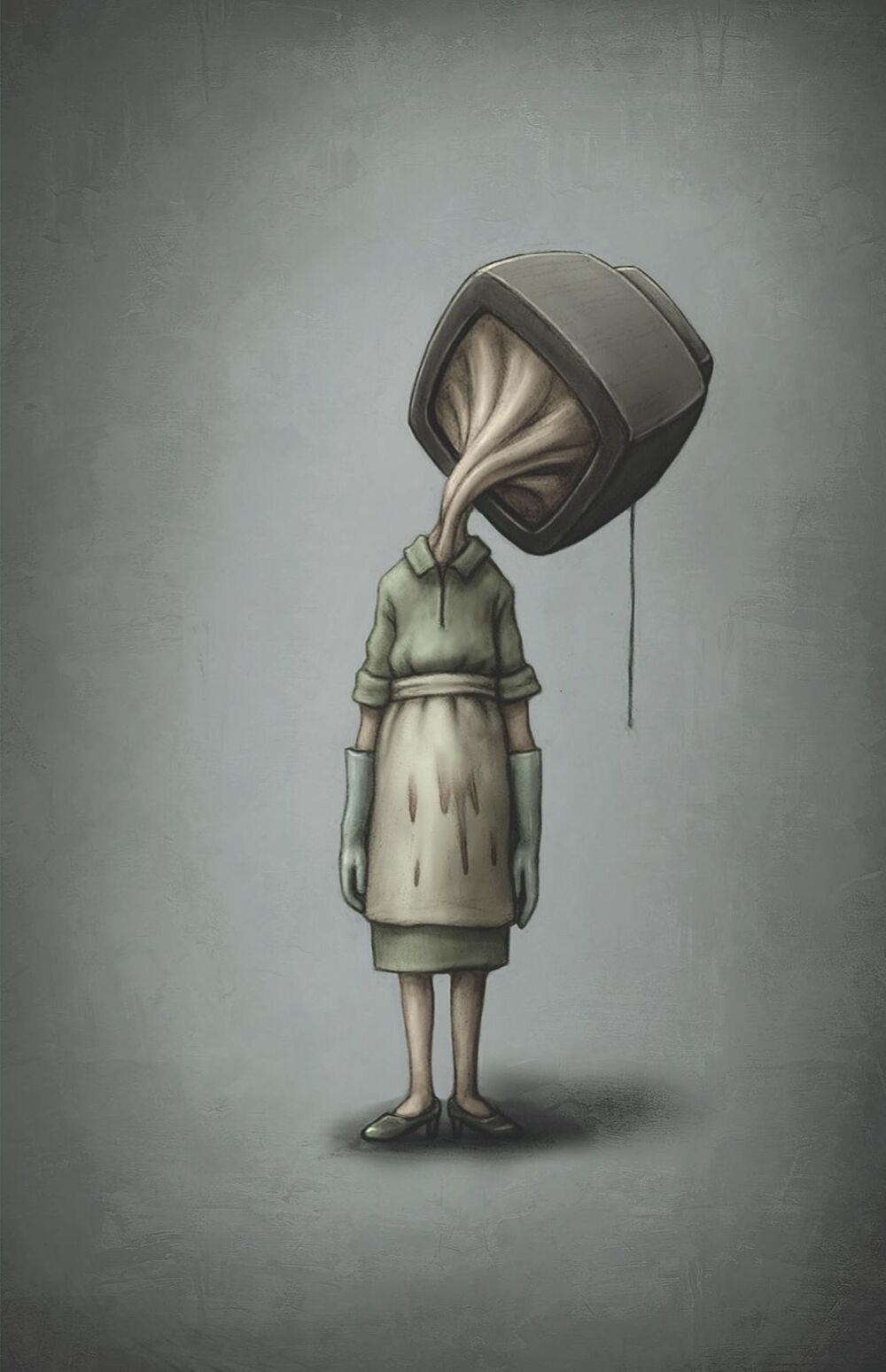 A scrapped concept would have also had viewers whose heads are actually melded into the screens of televisions that they now cart around as basically their new heads. Maybe they felt this was too much, but I think it would have been fun to see in motion. 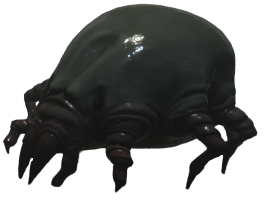 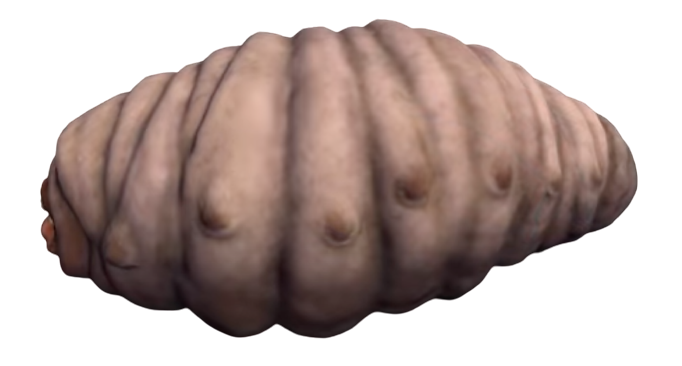 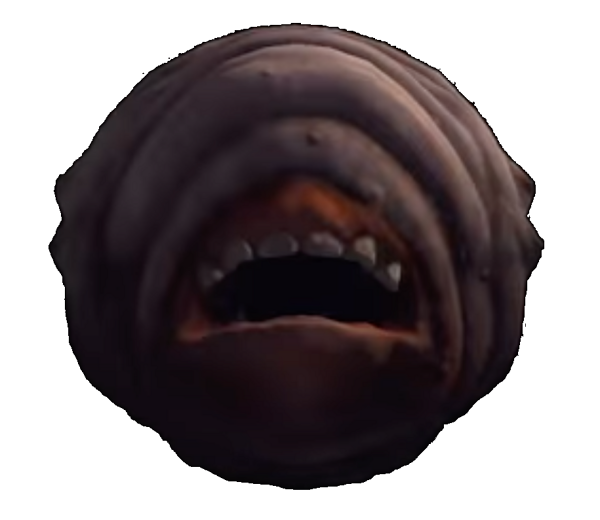 As an aside, these aren't actually enemies and we sadly never really get to see them in action, but giant moths, giant human-mouthed grubs, and strikingly accurate giant dust mites were all modeled for this game and make at least two minor appearances: first as jarred specimens in the school, and later as animals in a roomful of cages! Were they always just part of set design, or once planned to roam around the setting? I'm glad there's any way they appear at all, and demonstrate that the maw's leeches aren't the only magnified invertebrates in town. 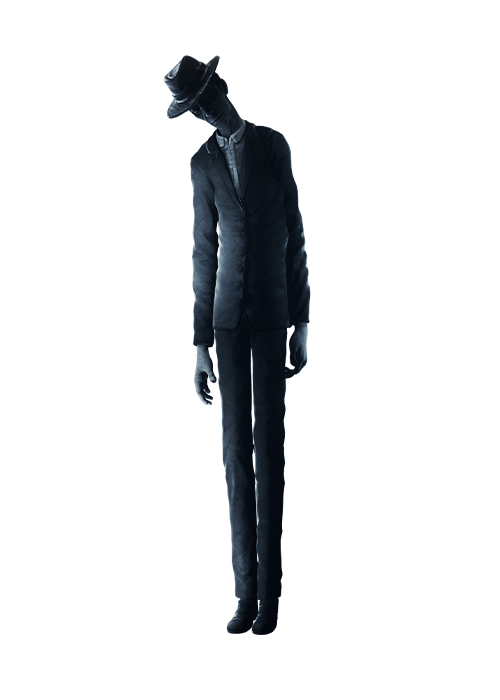 This tall, skinny guy in a suit and fedora appears to be the agent that actually collects children for The Maw, and is capable of travelling through the television signals. Comparisons with slenderman are obvious, but I personally think this character is made a little more disturbing for his otherwise mundane, emotionless human face. 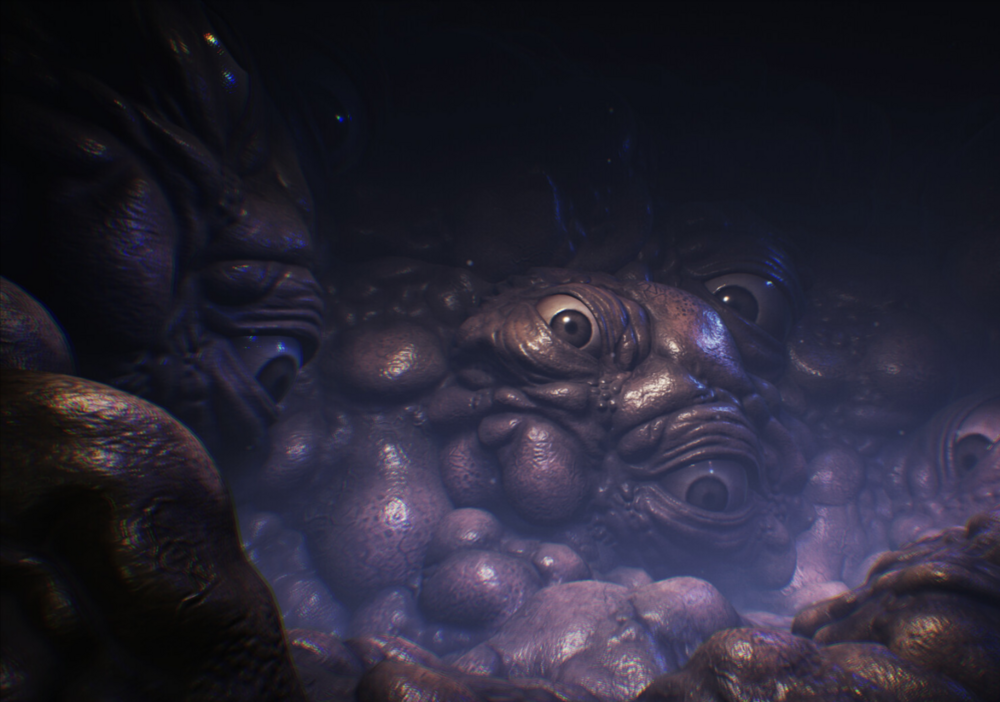 MANY new questions are raised in the final stretch of the game, when we enter the television signals ourselves and are transported to some sort of extradimensional space, "The Transmission," that doesn't quite follow natural, physical laws. Eventually we find that the very walls and floors of this environment conceal pulsing, polypous masses of skin with hundreds of peering eyes, which finally become hostile and begin to tear the surroundings apart as the kids threaten to escape. It's the most unnatural and inhuman thing these games have yet shown us, and it's still not clear what the mass is or why it exists, though some fans speculate that the TV Viewers are eventually absorbed into it. 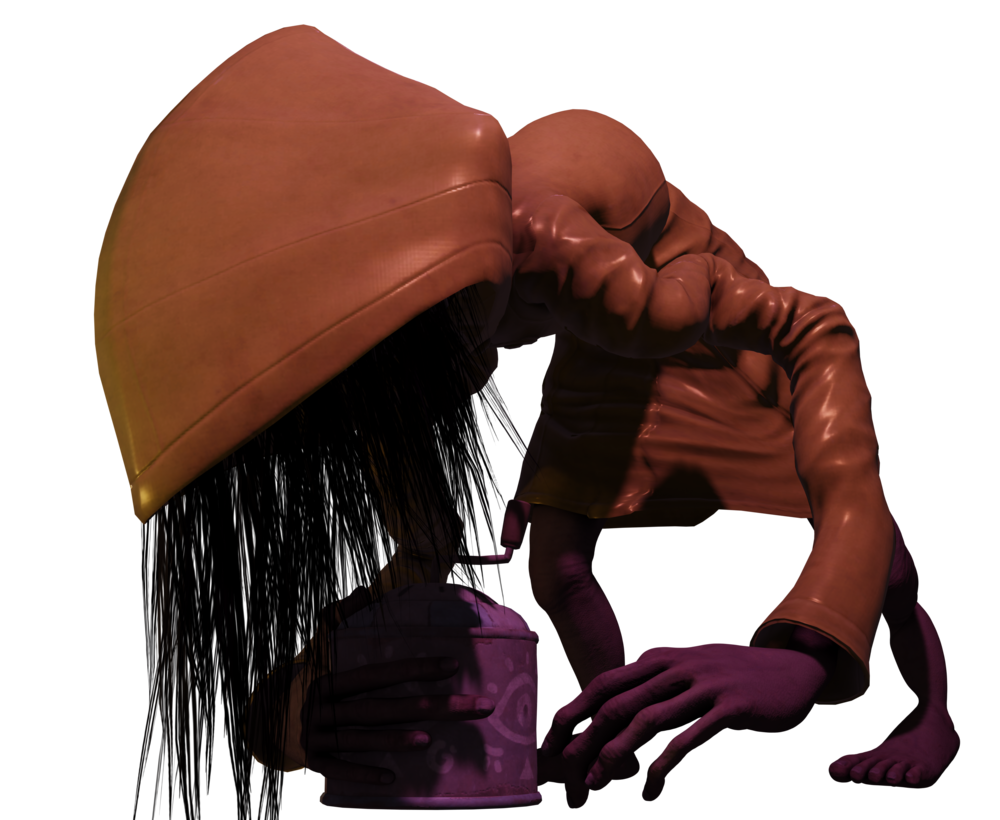 The final encounter of the second game and only real "boss battle" in either of them is Six herself. Taken into the Transmission by the Thin Man, we find her warped into a massive form more typical of the game's adult inhabitants, with elongated and twisted arms, a bent back and a huge head. I won't spoil anything more that happens from there, but this is a pretty fantastic creature design; her raincoat hood completely hides her face in darkness, but her black hair dangles straight down from it in a way that makes her look more like some otherworldly creature. If you're here, you probably already know that the first game ends with an implication that Six will be the Maw's next "Lady," but how this all ties in with the transmission tower, televisions and her monster form here remains completely speculative.

What I love about this setting, and something I think this second game brings to perfection, is the art team's knack for making ordinary things darker, more threatening and more "alien" in sometimes surprisingly subtle ways. They don't go all-in giving toothy jaws, tentacles or extra appendages to the humanoids to make them into monsters, and barely need to, really showcasing how movement, behavior, sound and contextualization can go even farther than aesthetic design to make a memorable antagonist.