Kickstarted back in 2019, Planet Apocalypse is a customizable demon-fighting miniatures game designed by Sandy Peterson - one of the original level designers of none other than Doom! You may notice at a glance, however, scientifically speaking and all, that any single demon from Planet Apocalypse could eat all of the demons from all of the Doom games, and you mostly have fantasy artist Keith Thompson to thank for that.

While I could say something about almost every design in the setting, I've decided to do a good old fashioned short and simple "top ten" here!

Painted by Chase Norton, this was the first model I ever saw from this game, and the design is beautifully perplexing to take in. It looks to have been created from a human corpse, walking on all fours, but its spine is so broken that its skinned, gory back faces forward. The head is mangled and mutated into a pair of meaty, almost arachnid-like chelicerae, but otherwise recognizable as a horribly altered human skull that drags on the ground. Metallic bars impale its body to bolt it together in this horrifying arrangement, and a lump on its back, right about where the spine bends, looks unpleasantly like the top half of a human head pressing against the skin.

Petersen has said that everything resembling human anatomy in this setting is not only of human origin, but still conscious and in pain. Some exist as only bits and pieces fused to demonic beings, while others, like the Catoblepas, are like a human body being "worn" by something else. It's a concept I've certainly seen before in demon-centric settings, but I'm not sure it's ever communicated infernal torture to quite this extreme. Hopefully this body came from such a colossal asshole that I wouldn't have to feel bad complimenting how much cooler he now looks. 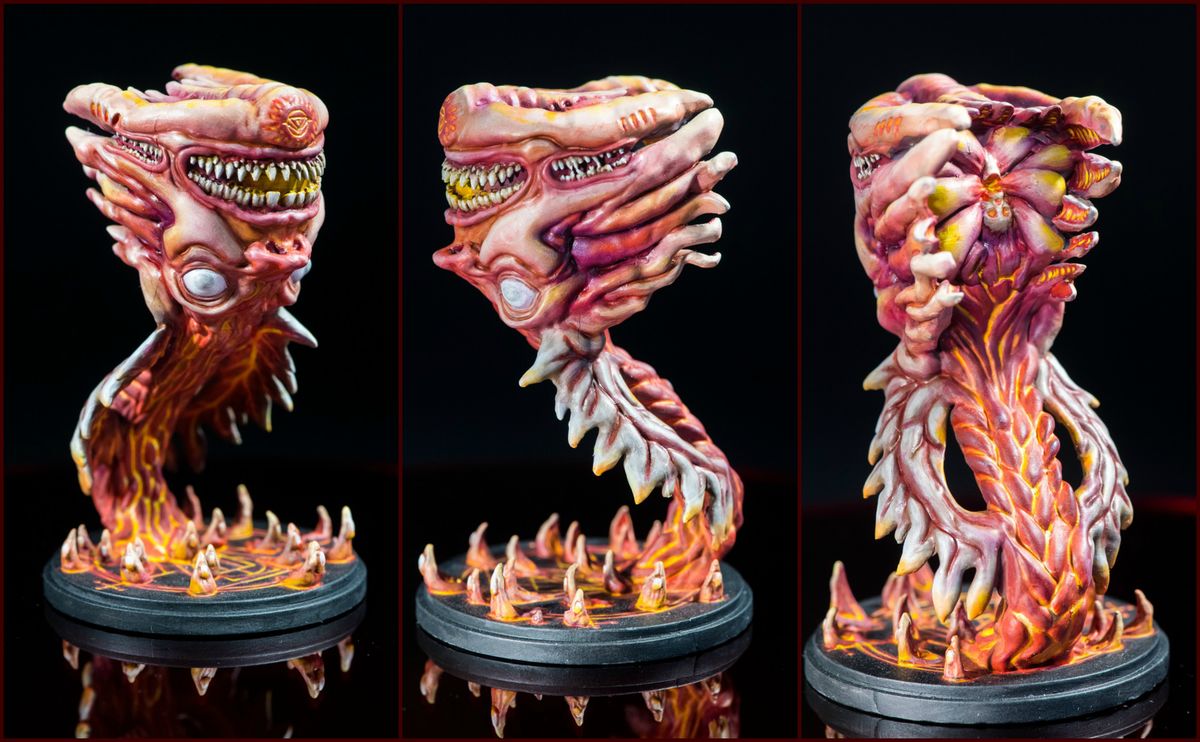 Most of the demons I'm reviewing will be using their raw CG models or unpainted minis, but here's one more painted by the same artist; significantly more bizarre than Doom's Cacodemons, this creature resembles a giant, upside-down, demonically mutated human head with huge, toothy jaws. An eye-like demonic symbol branded into its chin gives it a curiously cyclops-like face if you ignore the human eyes, which Norton painted to appear glazed over and blind anyway. The flesh of its forehead looks "peeled off" into a sort of frilly, flattened tail that it floats or slithers around on. 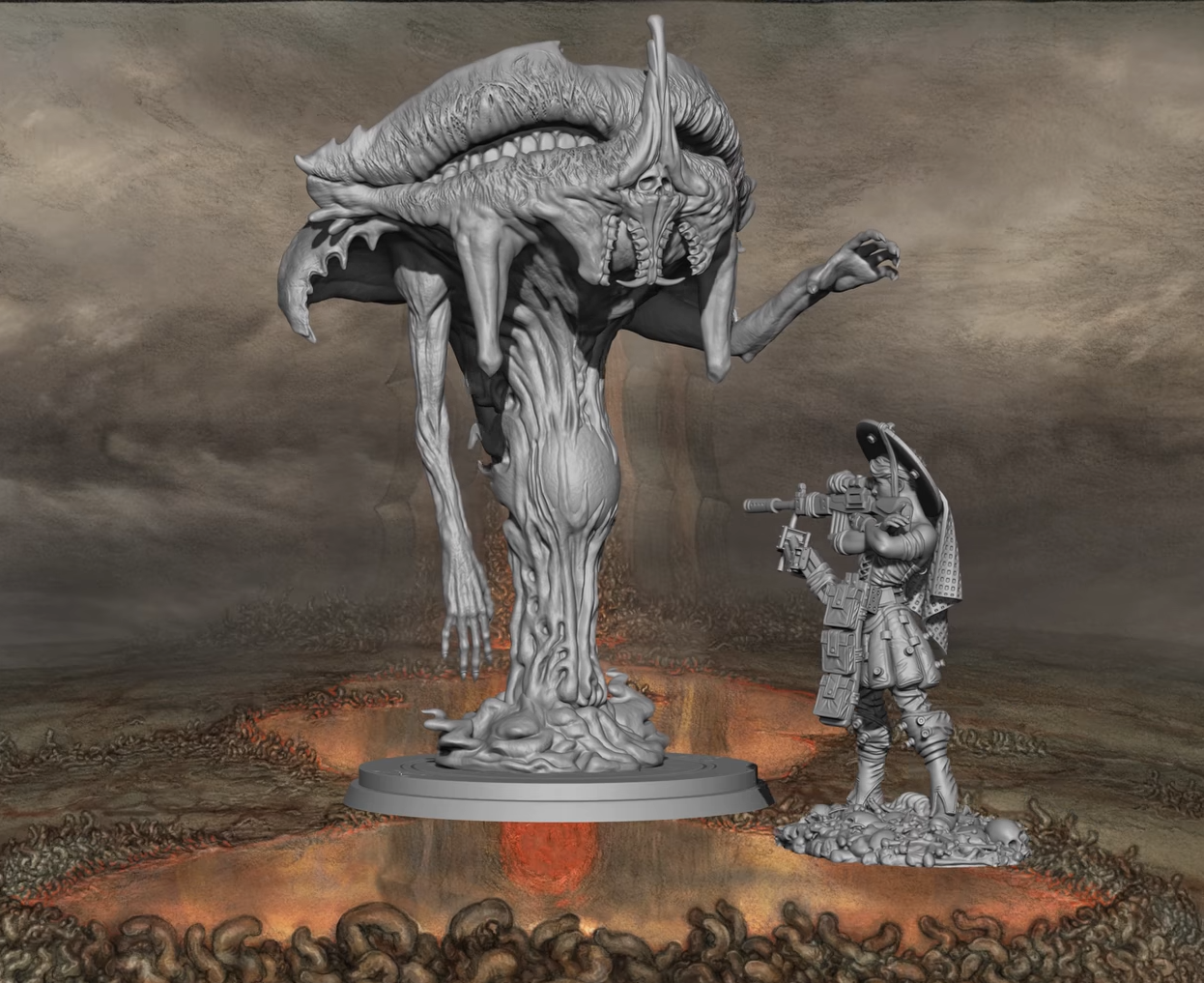 Not the kind of "elemental" made of rocks or fire from modern RPG's, but an "elemental" in the older occult sense, a fairy-like spirit. This elemental is said to be a "thing of evil, wholly given up to the senses" and has "no brain." Its anatomy is dominated by a gigantic set of humanlike lips and teeth, like a big, weird clam, but it has a tiny skull-face peering out of the flesh of its lower lip, with multiple animal-like jaws arranged more like dual sets of arthropod mandibles. Also cool is how the flesh above the skull tapers into a horn that overlaps the giant mouth.

From under the mouth dangles the thing's humanlike arms and meaty, melted-looking stalk of a body, giving it all the overall silhouette of a giant mushroom. Incredibly inventive! I think this might be the game's most outrageous and memorable creature design, and up there with the coolest monsters I've seen in years, if I may be honest. 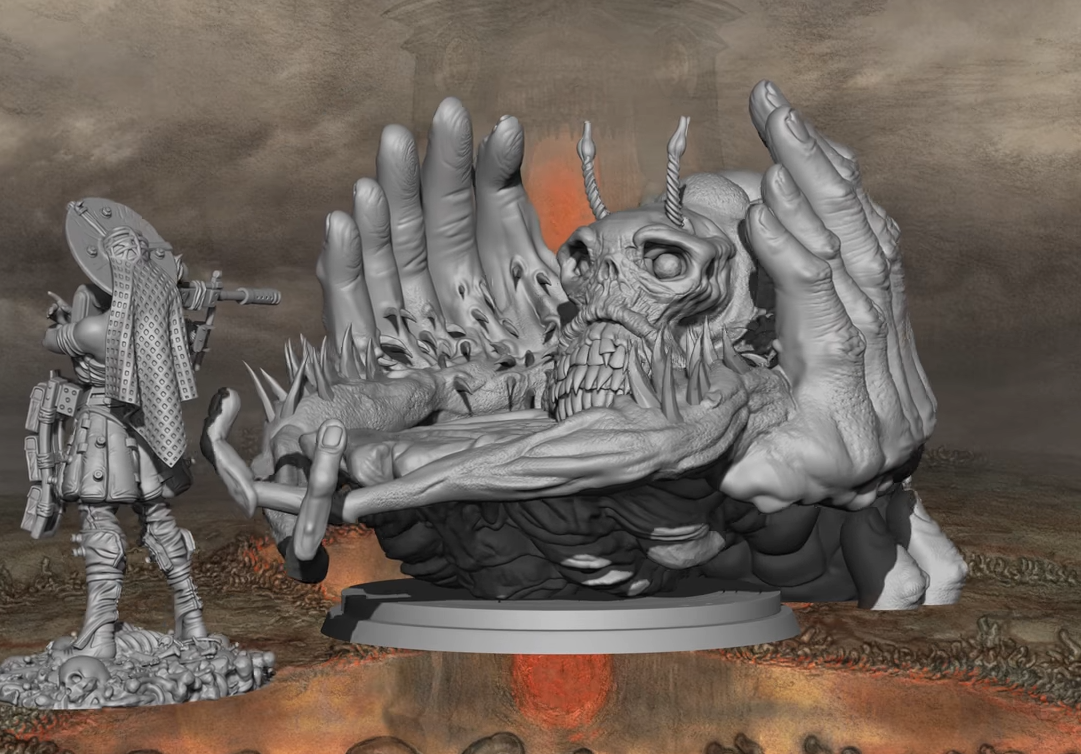 Several miniatures represent powerful demon Lords and Ladies, and while many of them get wildly surreal, Stroma might be my favorite design and concept of the bunch. She almost looks like a hunchbacked, caterpillar-like beast with a huge, humanoid skull-like face, sorrowful eyes and a pair oflittle antennae, several overlapping layers of teeth and gums bulging from her mouth. Surrounding this are her even more gigantic fingers and hands, forming something between a giant venus fly-trap and a blood-filled meaty bathtub stretched before her grim visage.

She engulfs a single hero at a time, so actually exactly like a big fly-trap. 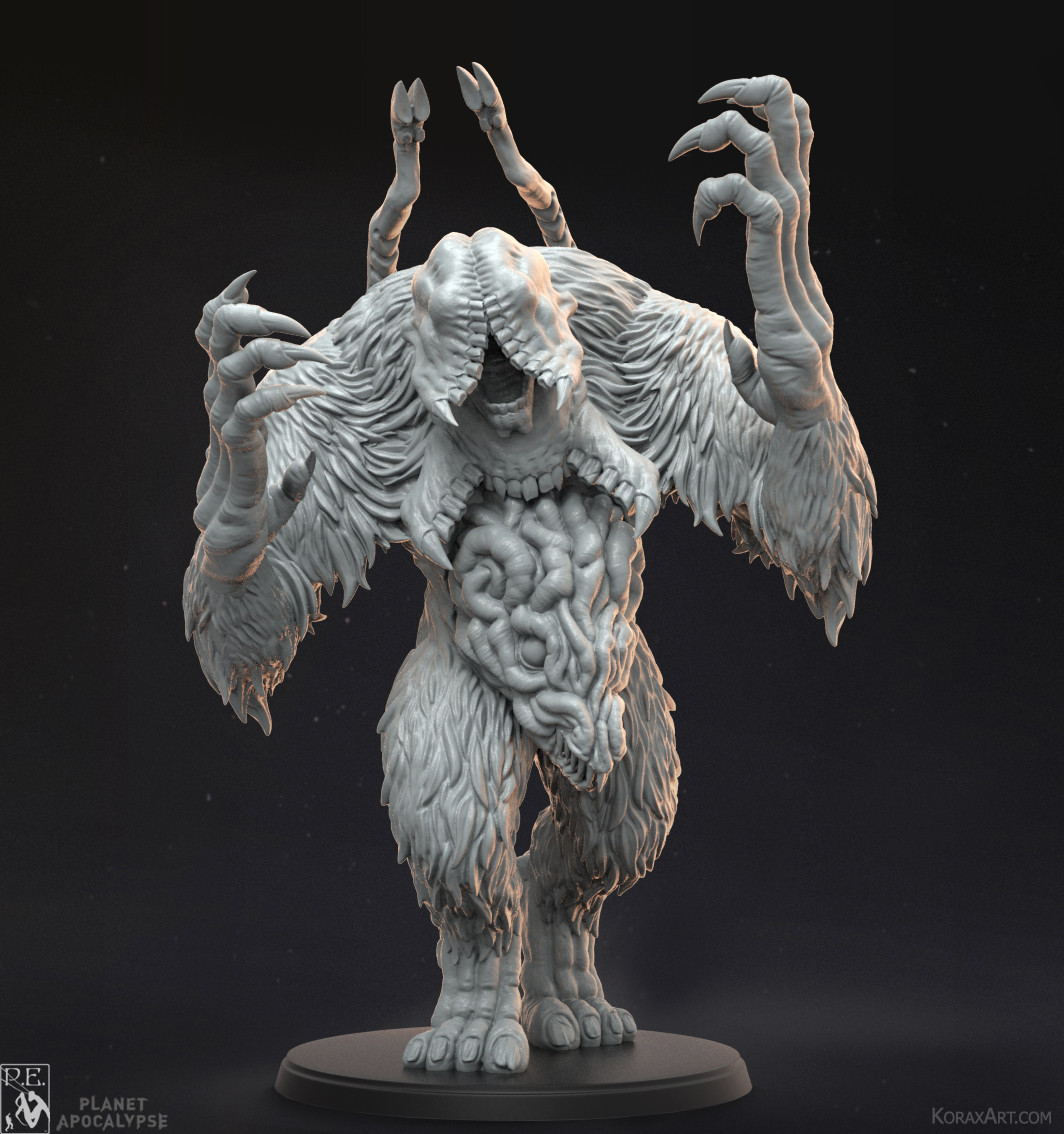 This demon is "just" a giant, shaggy humanoid, but really shows off how bizarre you can get with even such a familiar body shape. The head is like a smoothed-over, eyeless animal skull that was flipped over, split down the middle and butterflied open into a more scissor-like arrangement, but it still has a more humanoid, eerily gaping lower jaw. More jaws form its upper chest, broken into another set of insect-like mandibles, and from its belly hangs a large mass of intestines shaped into a sheep-like head, complete with its own little eyeballs and nasty teeth! The spindly, hoofed legs sticking out of its back are a great additional touch as well. 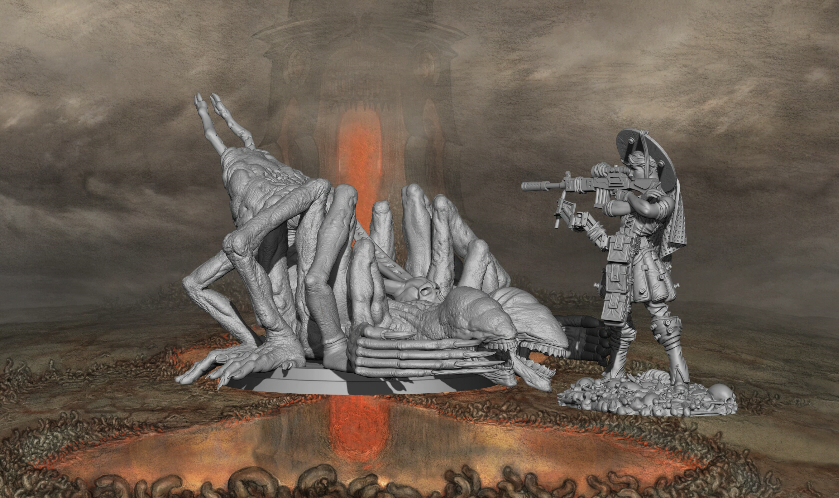 This demon is a spectacular arachnoid creature formed from human anatomy; its eight knobbly, malformed humanoid limbs are technically quite long, but bunched up in a tarantula-like fashion, and the frontmost limbs bear hands with alarmingly long, needly-clawed fingers, perfect for grabbing prey and scooping it into the two elongated, eyeless heads that form mouthparts quite similar to a "camel spider" or solifugid! Its "actual" head however is the small, bony human skull sprouting from behind these chompers. 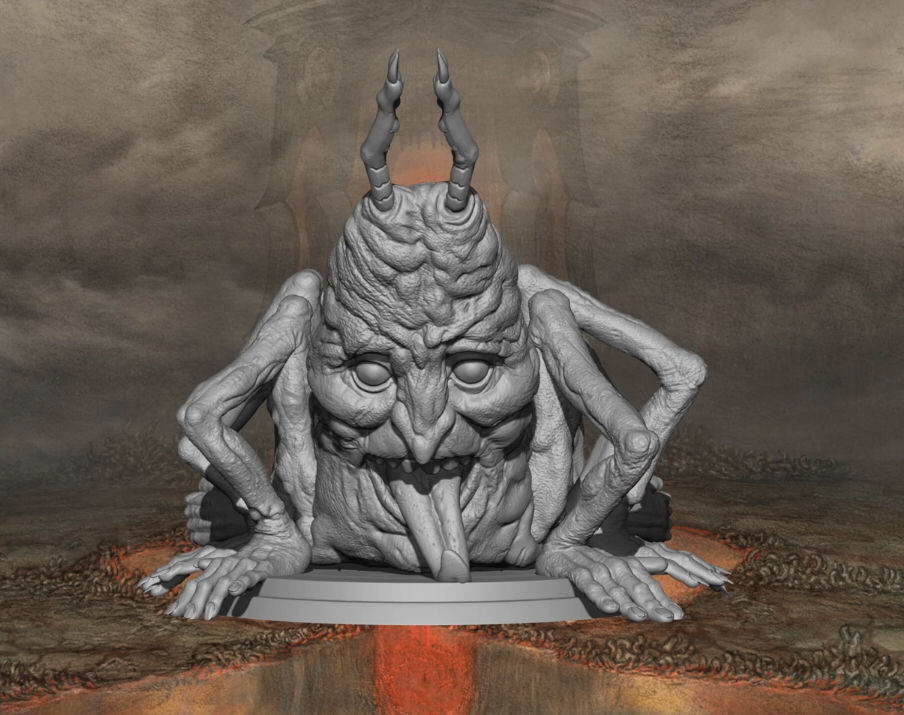 In classical demon fashion, many of these miniatures actually have faces on their rear ends, but the Raparee has one of the largest, a wizened, long-tongued human face on the underside of its bloated abdomen. Finally, a small pair of hoof-tipped animal legs sprout from the tip of the thing's tail, giving the arachnid a pair of cerci, but giving the giant face a pair of little devil horns! 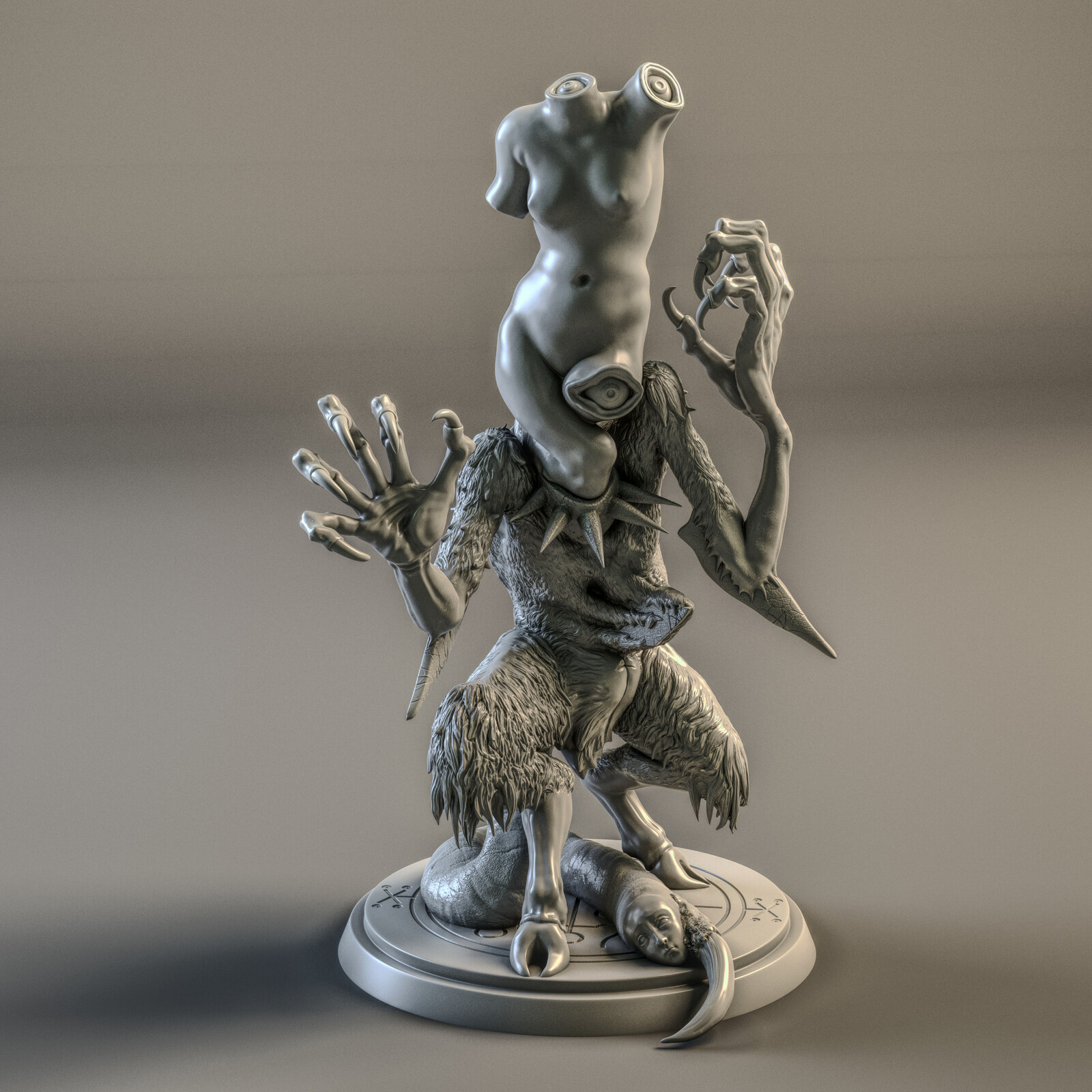 Sculpted by Fabio Wasques, this is another fantastically weird one. The concept behind this demon is that it intends to distract humans with its beauty, so...it brought the Venus de Milo to life and uses the entire sculpture as its head. The statue's original head as well as her tunic are missing, one stumpy leg serving as the creature's "neck," while a hideous eyeball peers from each of the severed stumps of the Venus's other limbs. Official word is that this does work very well as a distraction, even if the demon miscalculated why it works.

The rest of the monster is a gnarled, hairy humanoid with goat-like legs, oversized hands with hooked talons, and an obscenely fat, wormlike tail that unpleasantly ends in what may be a copy of the statue's original face, shoved to the side by the growth of a huge horn. The whole creature is suggestive, decrepit and just so unwholesome. 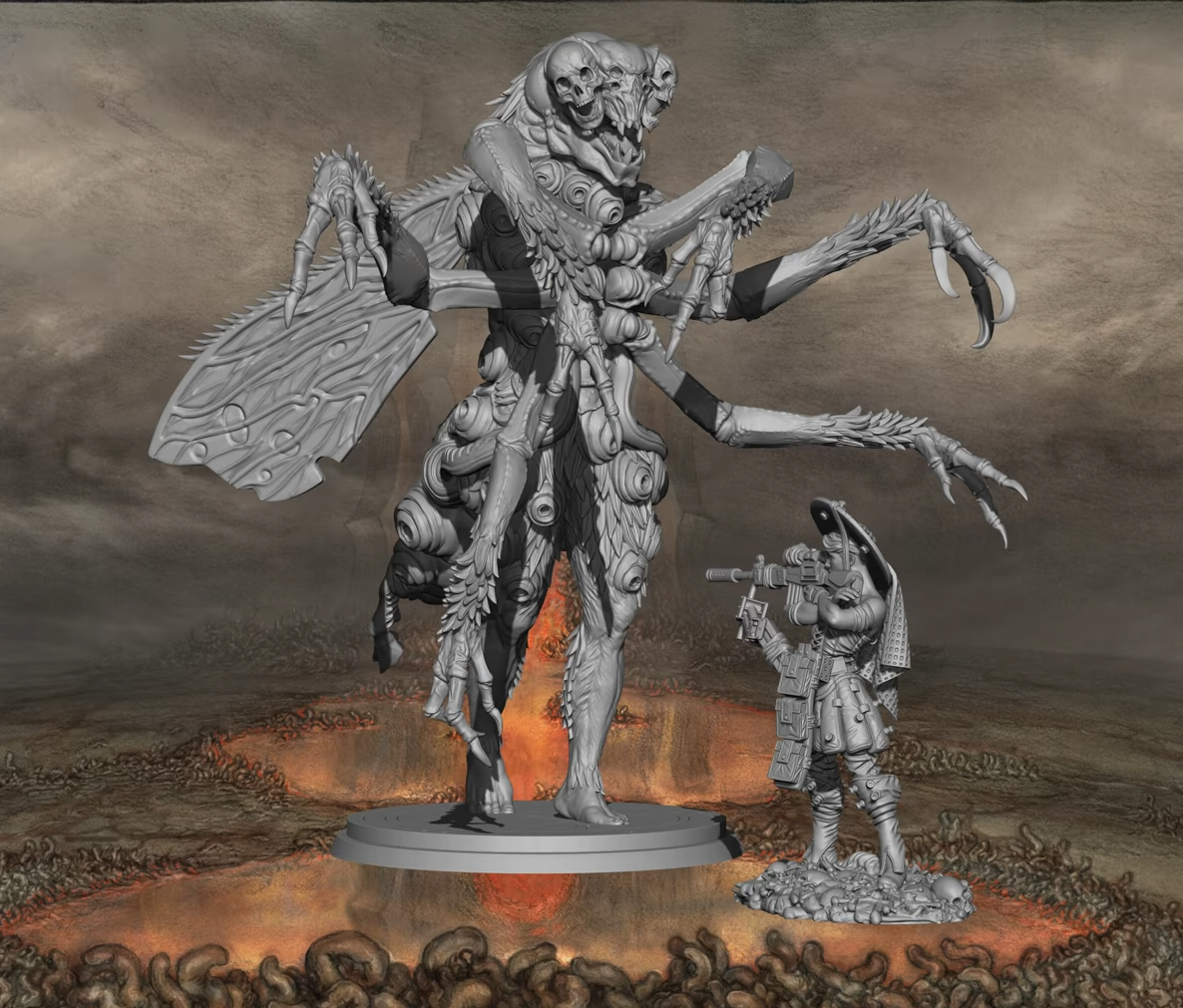 I couldn't skip this setting's obligatory fly demon! Surprisingly not named after Beelzebub, Procrustes is another option for a session's main Demon Lord, and overall has the shape of a giant, hairy fly standing upright on a pair of human legs. These human legs aren't counted towards its number of arthropod limbs, however, so it still has six chitinous arms sprouting from the thorax, right where they'd naturally be on an insect! While the fanged, demonic head could have used a long tongue or proboscis, it still gives a splendidly fly-like impression with the two human skulls bulging where an insect's eyes would be.

The most inventive detail of this being is that something resembling big, bloated larvae are embedded throughout its flesh, like enormous warts! You could also mistake these for large "beehives" or even insect abdomens, but their concentric ring-like segments are most accurate to the front ends of maggots and particularly bot-fly maggots, if they had either empty holes where their heads should be or their tiny heads were fully retracted. These many target-like organic nodules give Procrustes an especially unnatural and psychedelic look, and the designer should be commended for feature I've never really seen before on any of the numerous insectoid demons littering fantasy media! 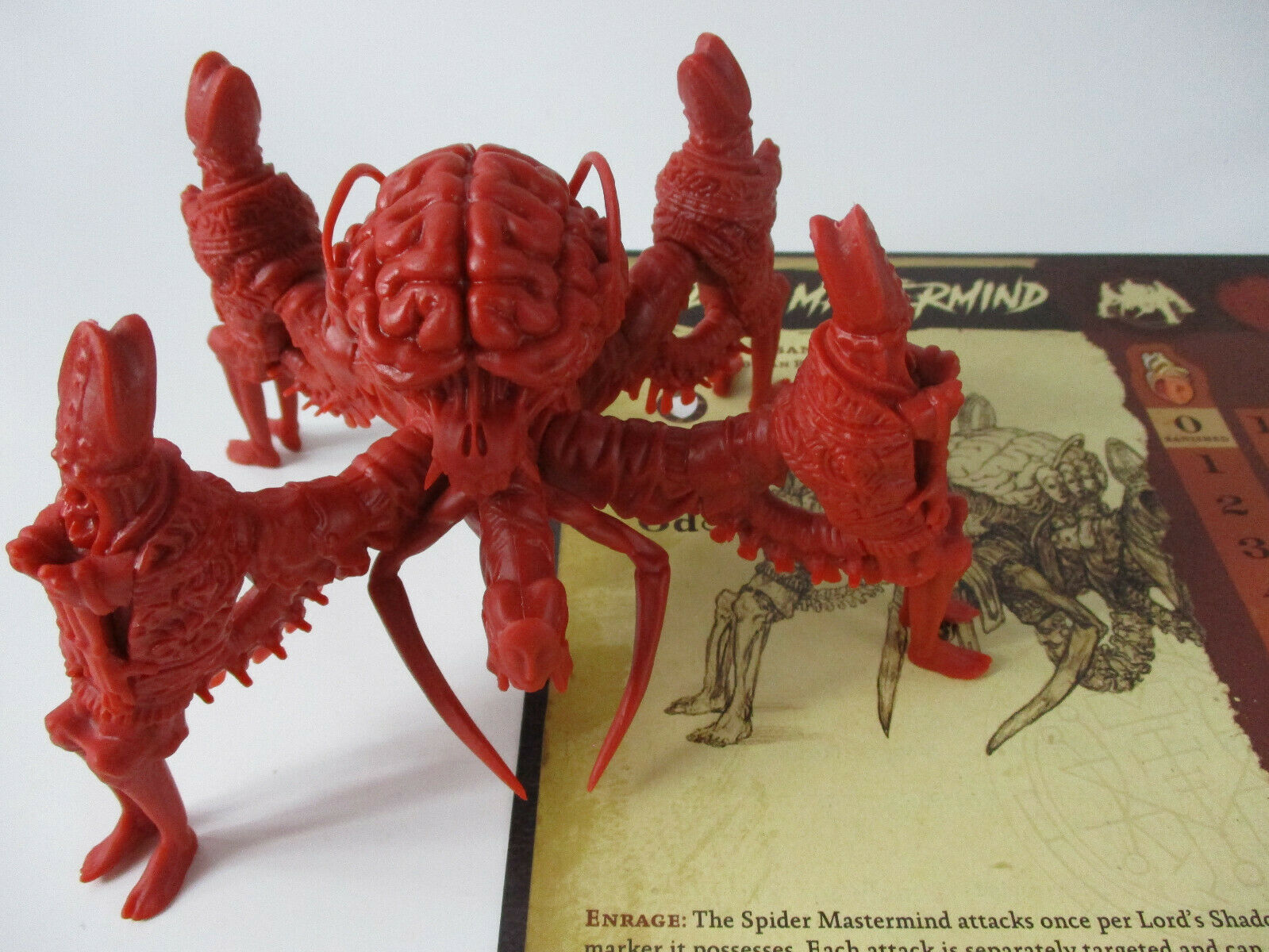 You may recognize this immediately an overt DOOM Homage, but while Doom's Spider Mastermind was a brain atop of a cybernetic body, this one is cobbled together from all organic components and much, much weirder; we've got a central brain with no facial features other than an almost ape-like set of upper teeth, nostrils and gums stretching from beneath it, and below that, an unsettlingly phallic growth ending in a small, simple humanlike mask and two sickle-like claws...but you know you've got a hell of a design when a mutant brain with a weenus is overshadowed by its legs. This thing walks on four entire human corpses connected to it by thick, meaty stalks and additional cable-like spinal columns, but not just any human corpses; they're obviously the mummified remains of Catholic saints! Haha, dorks, bet they didn't think they'd ever be a big ol' dickbug's feet. 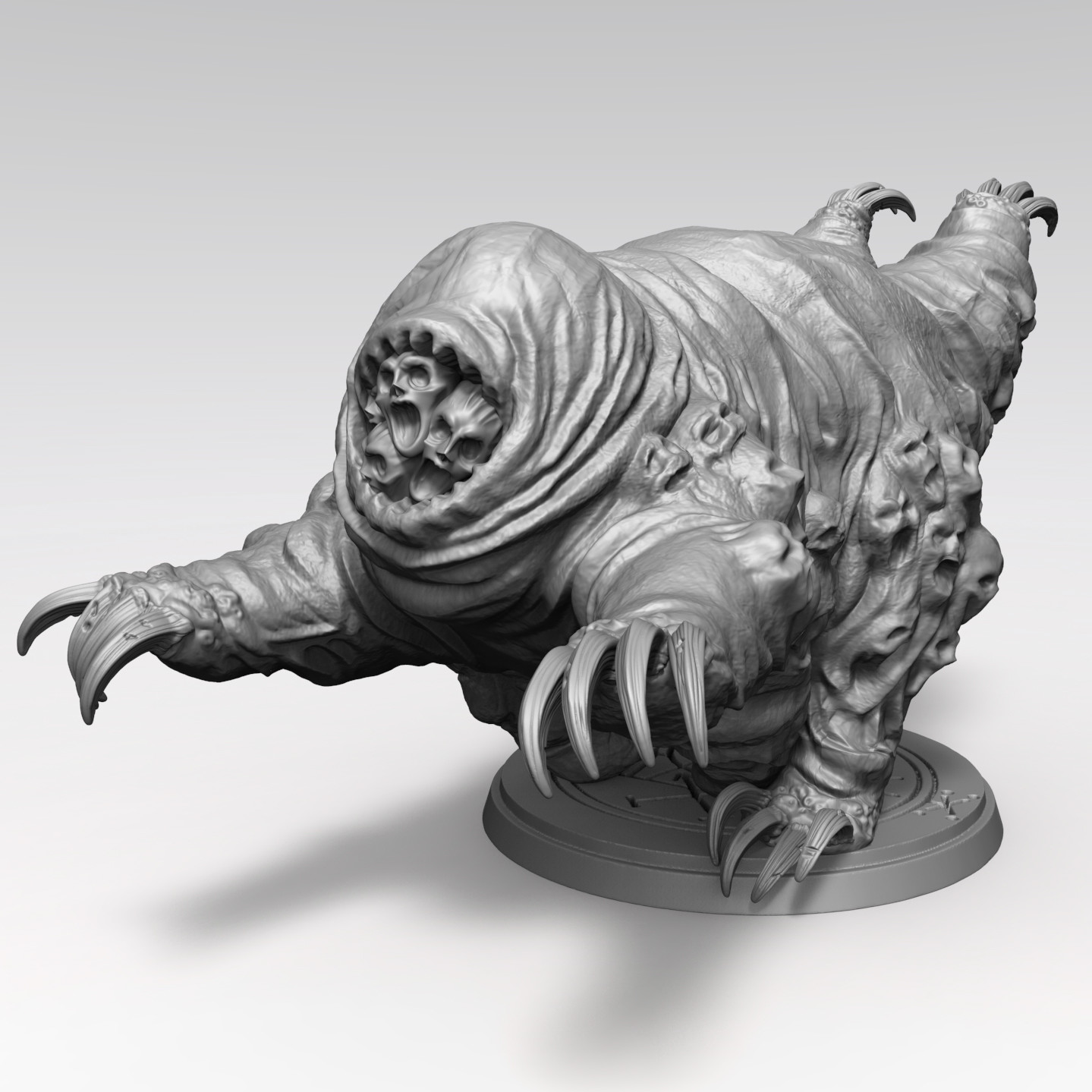 Yes, this game has a giant, demonic tardigrade, sculpted by Miranda Golosiy. It looks mostly like the real animal, but with a more vertebrate-like toothy maw in its rounded, saclike head, and its body is apparently packed full of human souls; multiple ghoulish faces howl from its open jaws and dozens more press out from within its flesh! Based on a tardigrade's ability to hibernate, this demon is apparently designed to be a massive pain in the ass that can almost endlessly respawn!

It really is delightful to see the popularity of tardigrades soar lately, especially for those of us who once knew them as just another cool microorganism obscure to the average person, but this isn't just a result of the trend; Petersen says this monster's presence is a homage to the real water bears he loved observing through a microscope as a child, and it's just too bad he didn't have more input on the original Doom demons, or maybe gamers could have been introduced to tardigrade quite a bit sooner!