This is an article I've actually thought of doing off and on for as long as I've had this website: monsters that existed almost exclusively as toys, usually from before I was born, and not part of any larger, more famous brand or franchise. These are "misfit" one-off monster toys, and incidentally, all worth a small fortune if you ever stumble upon any... 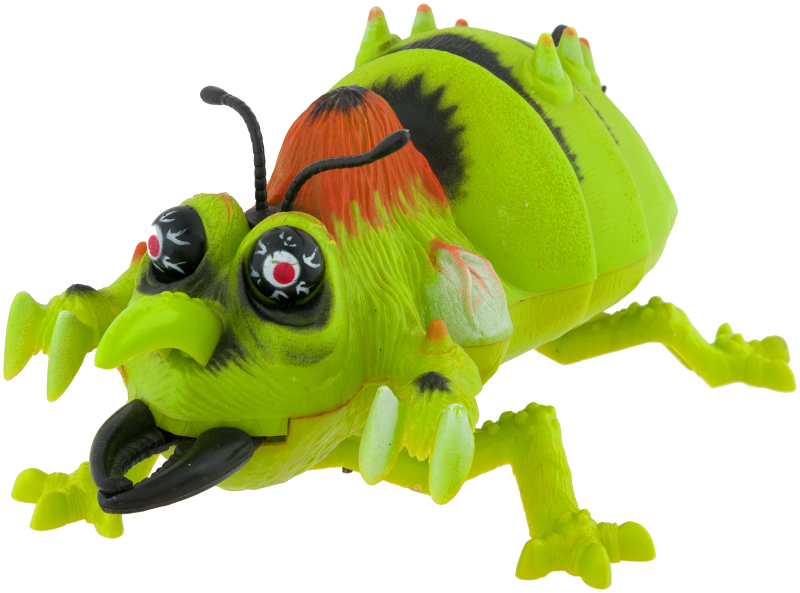 This 1964 toy line by Remco focused on a giant, monstrous insect adorably named Horrible Hamilton. Who named him that? Is that actually his birth name or chosen name? Why? Maybe he was named that by the news, like a hurricane. His design resembles no one particular kind of insect, but reminds me most of a fat, green, wingless hornet. I love his veiny, hairy looking, hump-backed thorax, almost reptilian legs, nose-like horn and the way his veiny black eyeballs protrude frog-like from the top of his head!

Hamilton's main selling point was that, by pulling a cord, you could make him walk forward and trample his pathetic human opposition. That's not all, though! 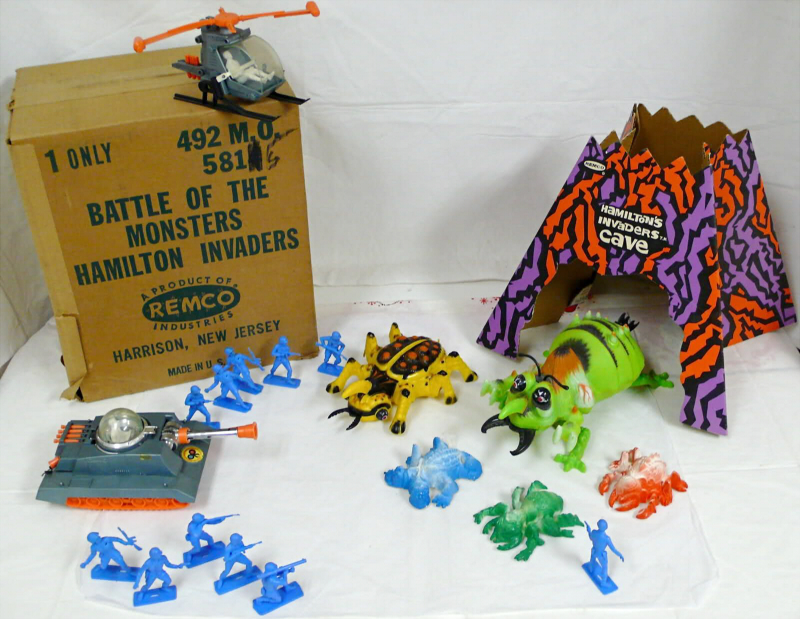 Photo by Toys of the Ages

Human vehicles and soldiers were produced especially to fight back against Hamilton - a laughable endeavor! - and a few other "bugs" existed to speed up the ensuing massacre. Hamilton's got better things to do with the rest of his afternoon than crush humanity by himself, obviously!

A smaller, flatter insect with a beetle-like shell was marketed as "Brutal Beetle," while a modified version of the same creature (not shown here) with a fin down its back was oddly referred to as "Spooky Spider." This Sears exclusive set also had four bugs that were simple, hollow plastic shapes, the oddest of which wasn't an arthropod at all, but some sort of two-headed lizard. I also love the "cave" they included as Hamilton's base of operations, just a simple cardboard trapezoid patterned in jagged, psychedelic red and purple. I'm going to interpret this as some sort of secreted hive material, personally. 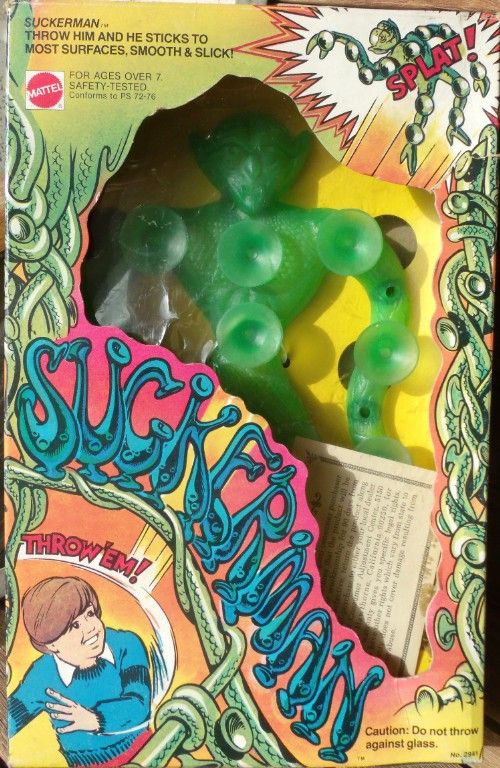 That box art is just beautiful, isn't it? You've got a gooey green "Suckerman" logo on a backdrop of green tentacles and snakelike skin! 1979's "Suckerman" was just a large, floppy, rubbery humanoid with suction cups on the front and backs of its arms, legs and torso, originally in translucent green but eventually released in an assortment of different colors and a glow in the dark edition. Besides the suckers, the creature has long, boneless looking limbs, scaly reptilian skin and a pointy-eared, almost vampiric looking head! 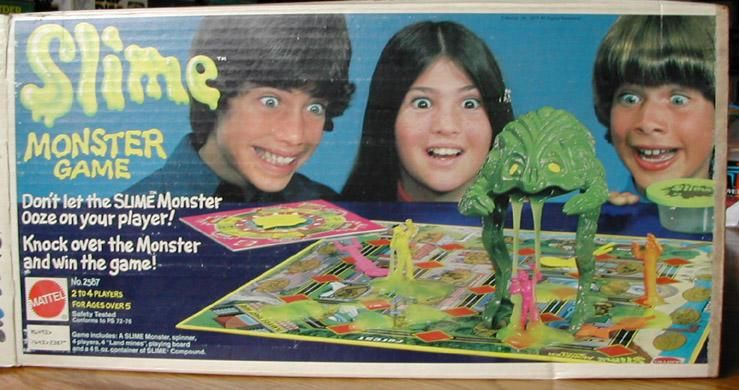 In this 1977 Mattel board game, players move their terrified plastic people around a map representing a city, hoping the giant Slime Monster won't come by and drench them with its presumably toxic, perhaps digestive green slobber. Players not only took turns moving their own characters, but moving the monster itself around its special designated spaces, cleverly illustrated with smashed and broken terrain on the game board. The creature would slowly dribble slime from its mouth for the duration of the game, and part of the competitive goal is to knock over the opponent's piece with the strands of sludge as the monster is moved.

When we hear "Slime Monster" these days, we usually assume that the monster itself is an amorphous mass of goo, but what we have here is a fascinating, wrinkly toad-like beast that strides around on two extremely long hind legs to drench its victims from above! 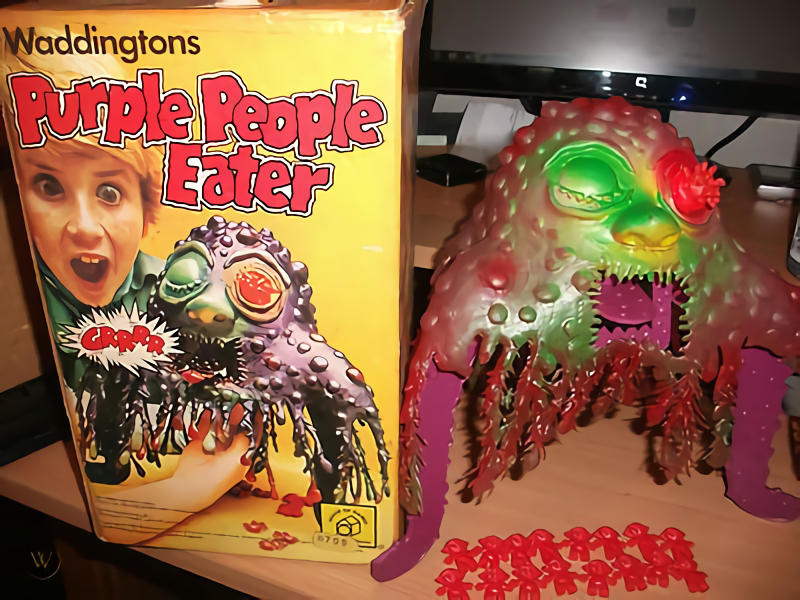 Not legally related to the famous song, this 1980 "game" apparently worked like Operation: you had to remove tiny, troll-like plastic people from the People Eater with tongs, but you needed to avoid touching the metal edges of the monster's mouth. That's pretty funny. You would think the goal is to put them in the People Eater, to be honest. Maybe you could have one player feeding it and one player un-feeding it, really spice things up. 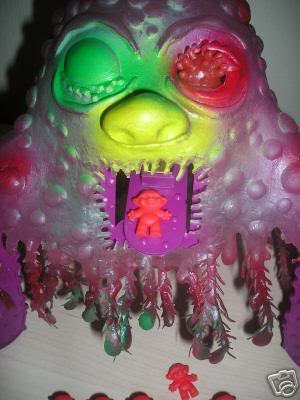 WHAT a design though, I mean seriously, WOW?! Most interpretations of the Purple People Eater are cyclops-like humanoids, but this glorious abomination is like a translucent, warty jellyfish with spiny, hairy looking tentacles, a mouth that looks jawless and toothless but lined with cilia, and a distressingly humanlike face with a big nose and eyes. But while its right eye is always closed, its left eye is open to reveal a red "eyeball" covered in blunt spikes. There's no cornea or pupil, just this thing like a sea urchin residing gruesomely within its socket, and that part lights up by the way.

I don't know how many of these features are really part of its concept or just how the toy was manufactured for cheap, but my most literal interpretation is by far one of the most unsettling creatures I can think of. A giant, gelatinous, fuzzy, tentacled head that exists only to eat human beings. I first saw images of this toy almost twenty years ago, and its design has kind of haunted my imagination ever since. It's probably informed a lot of monsters I've designed. 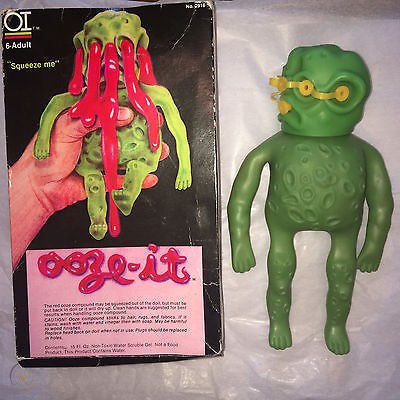 Produced in 1981, the Ooze-It is a soft, squishy green humanoid who leaks slime from its eyes, nose, mouth and ears when you squeeze its rubbery body. What I find most interesting about its design is meteor-like or moon-like surface texture, its facial features modeled like lopsided craters and many smaller craters marring its body surface. Eerie! Where on Earth does something like this even come from, biologically?! 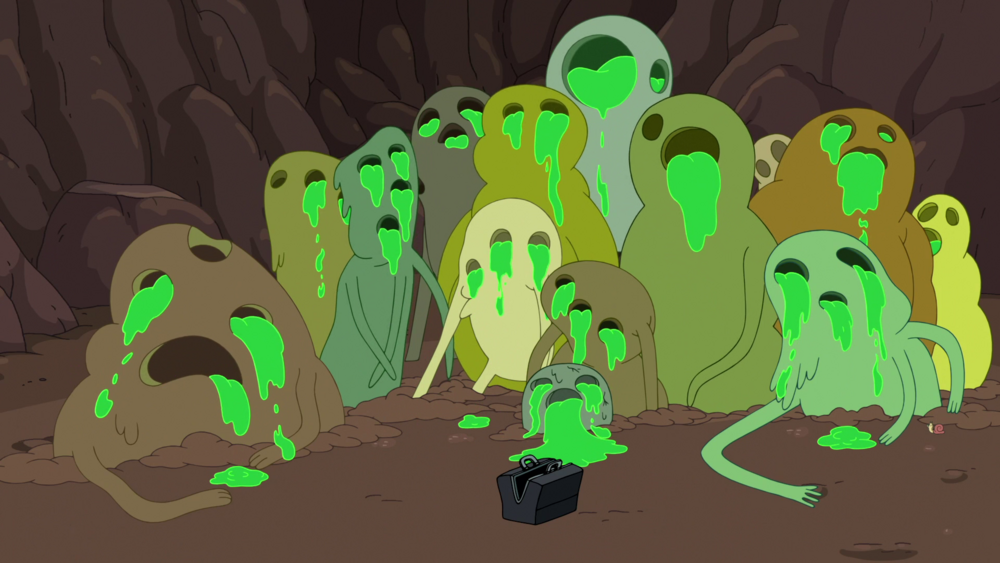 Well, if you ask Adventure Time, something strikingly similar results from a combination of toxic waste and an explosion of dark magic in the distant future, creatures that even come to be known as "Oozers!" The most distressing thing about them, besides the fact that they can dissolve whatever they touch, might be that they eat people by stretching open their toothless mouth-holes and swallowing them whole. 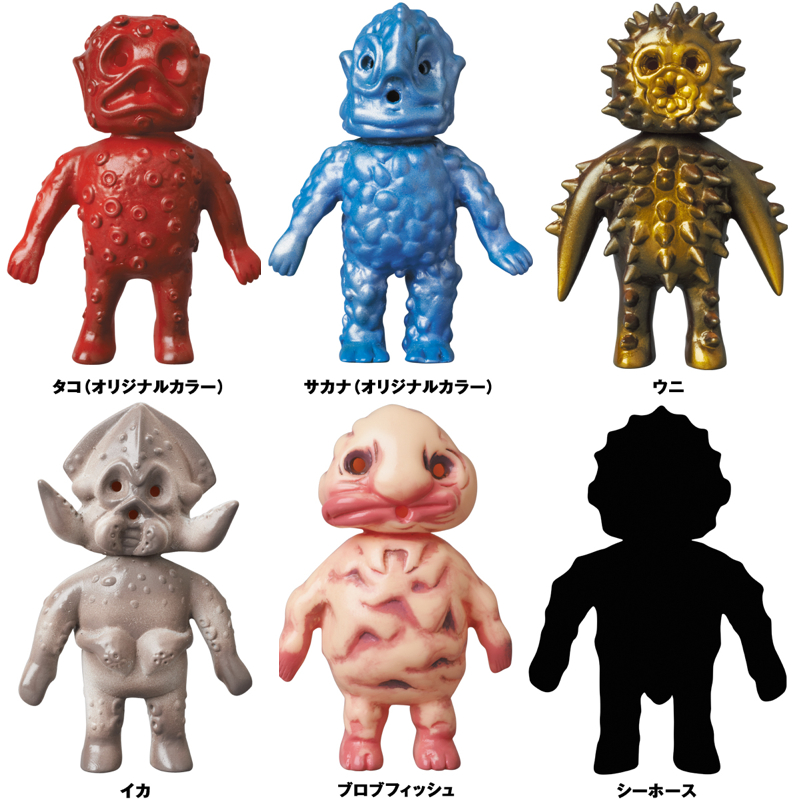 Long obscure and nearly forgotten, the Ooze-it experienced a surge in nostalgia some years ago when its design was recycled for a collectible vinyl figure, and many more permutations have arisen since, remixing aspects of the creature into various new forms. This set even expands its "family" into an assortment of sea monsters including an urchin, squid, and blobfish ooze-it! These and other reincarnations are a bit pricey, though the 1981 original is worth at least a couple hundred dollars. Complete in box, easily up to a thousand!

You'll have to watch this ad clip to understand what the "Strange Change Machine" was: a 1968 playset that heats up enough to soften its plastic figures and crush them into compacted tiles. Once heated again, however, the tiles would unfurl back into the same shape. Despite the commercial, the process of heating and uncurling a Strange Change capsule supposedly took a long time, probably longer than the average child's attention span, but it was still a pretty fascinating concept. 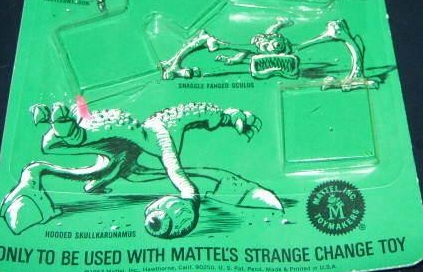 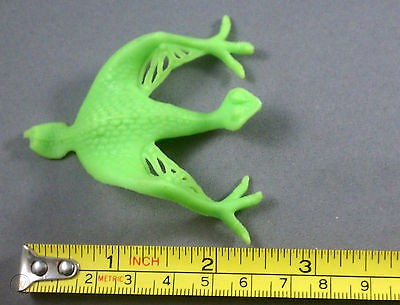 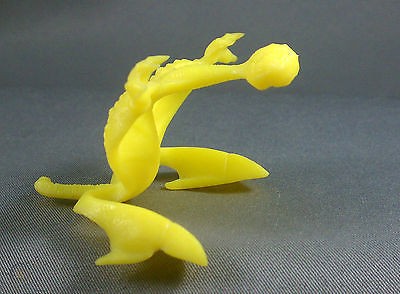 Most of the creatures were dinosaurs and a few invertebrates, such as the octopus and giant spider, but there were a handful of stranger, more original creatures that are, unfortunately, tricky to research. Just look at this amazing Slunkopod (left) with its flatworm-like head and the even more amazing Hooded Skulkaronamos, a thing with a flaring hood-like body and a single, stalked eyeball for a head!

My favorite of the Strange Change originals, however, is the only thing on this whole page that I actually own. 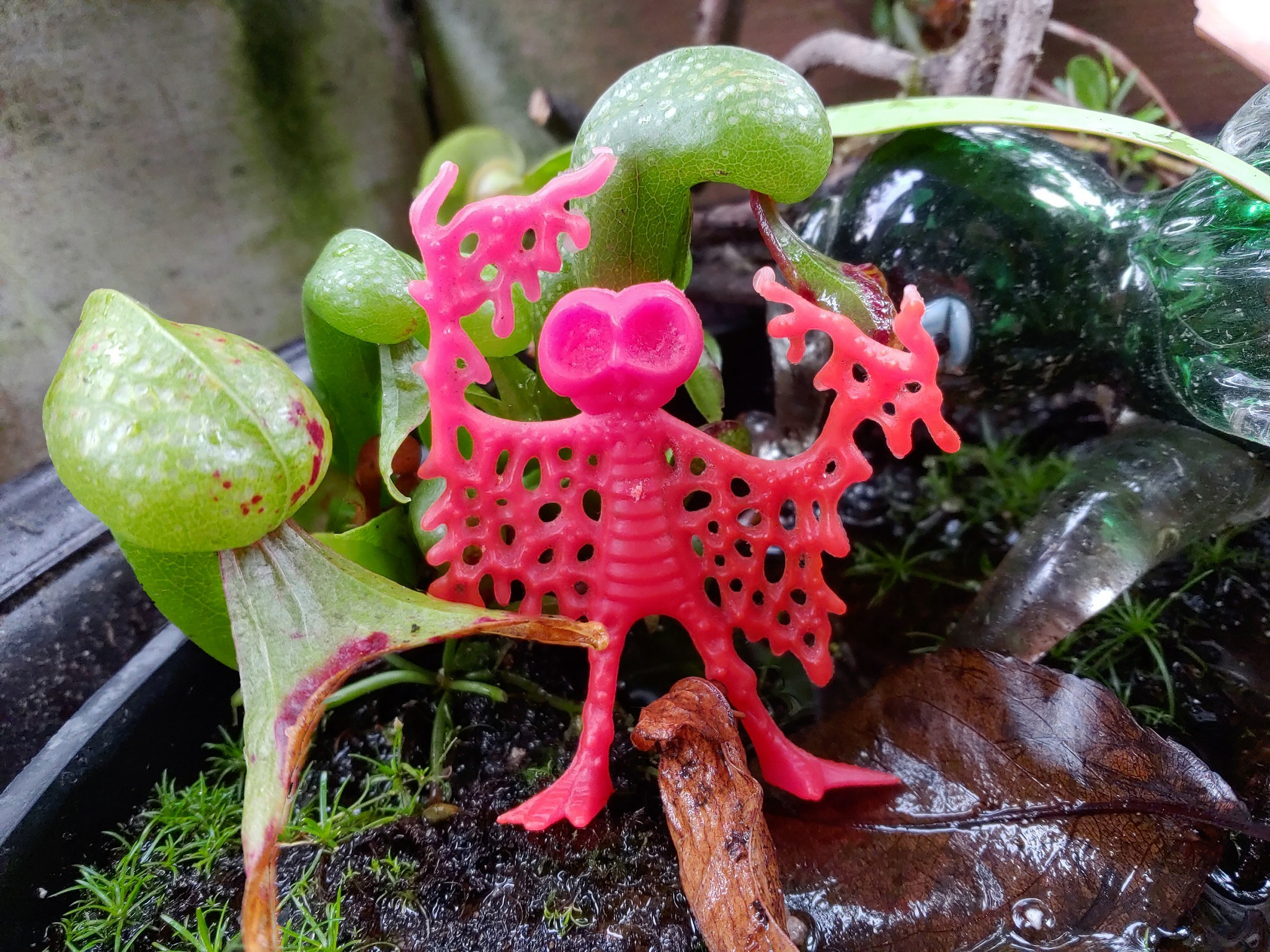 Looking right at home in some of my cobra lilies (Darlingtonia) the "Membrane Man" is so named for the slimy looking nets of latticed flesh dangling from its tubular arms, even its hands little more than clumps of veiny tissue! Its thin body is more like that of a tailless lizard, while its bizarre, almost heart-shaped head is predominantly a pair of large, concave eyesockets with a relatively tiny, fanged mouth. 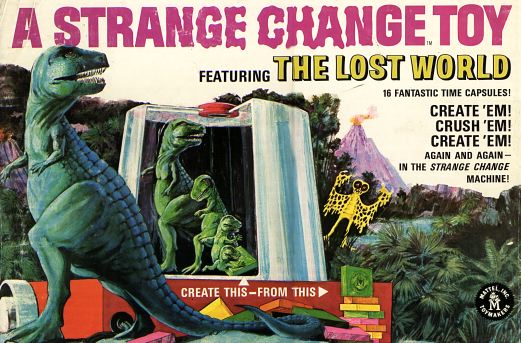 What IS a Membrane Man, exactly? We'll probably never know, though the original box art depicts a bright yellow specimen lurking in a jungle where we also witness a Tyrannosaur and a distant sauropod of some sort. This could imply the creature dates back to at least the Cretaceous. However, since the Strange Change Machine itself is present in the scene, this could just be some irresponsible tourist wantonly Strange Changing dinosaurs and Membrane Men into some sensitive modern-day ecosystem.