WHAT THE HELL ARE "MUMMIES?"

We're revisiting an old favorite and a major Halloween staple this time, just as gave Witches a fresh look only last year! For a while, I loved mummies so much that I collected almost any I ran across, which is still the subject of one of two "Easter Egg" pages on the front index of bogleech.com! Eventually, I kind of burnt myself out on them, and by now only bother picking up really unique mummy items, though that's just what we're here to talk about!

I've said this before, but the evolution of the mummy as a monster concept is a lot weirder than most people ever stop to consider. Technically speaking the word refers to any corpse that has been preserved by dessication, but most people associate it with intentionally dried and preserved bodies made most famous of all by Ancient Egypt.

The idea of a mummy as a "monster" comes to us from 1932's "The Mummy," inspired by the real-life opening of Tutankhamun's tomb a decade prior and the ongoing rumors of an associated curse. Producer Carl Laemmle Jr. wanted to find an Egyptian-themed horror novel to adapt in the same spirit as Dracula or Frankenstein, but finding none, relied on the extremely prolific writer Nina Putnam to develop a story from whole cloth.

Ironically, the mummy in the film returns to full life and even loses the bandages fairly quickly, but the few minutes of a dusty old corpse shambling around in gauze apparently left enough of an impression on audiences of the time that it was all anybody really cared about...and made for one of the cheapest, easiest Halloween costumes there could ever be, no doubt another reason it stuck so hard and fast in our cultural memory.

That's pretty much all there is to how mummies originally became Halloween Monsters, but their journey didn't stop there. A mummy is "supposed" to be a desiccated human corpse and usually from an Egyptian tomb, yes, but we only recognize this particular corpse as a "mummy" rather than a "zombie" because of those signature wrappings. It isn't even how real mummies were ever actually wrapped, yet we define the concept so hard by those wrappings that, at some point, we decided you don't even really need the human corpse part. 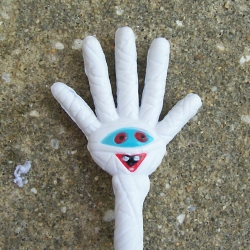 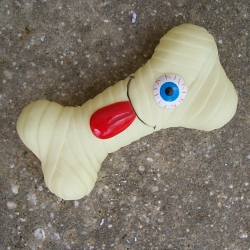 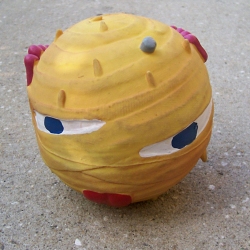 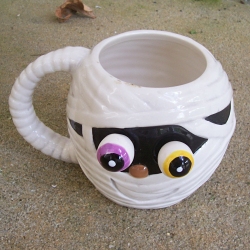 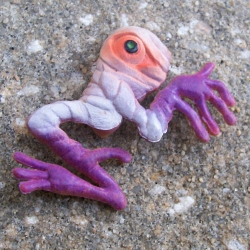 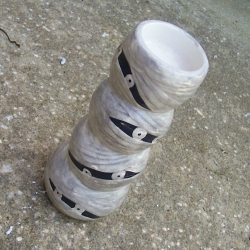 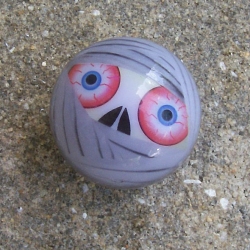 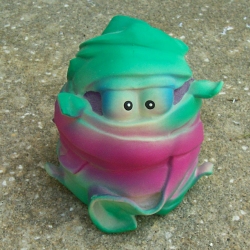 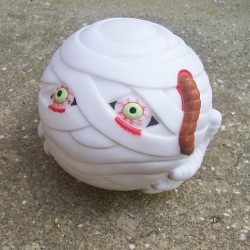 Mummy animals are one thing - those existed - but by now I've seen mummies in the form of individual body parts, inanimate objects, trees, foods and simple geometric shapes. Some of them are still obviously at least "carrion" of some kind, but with others, it's hard to be sure. 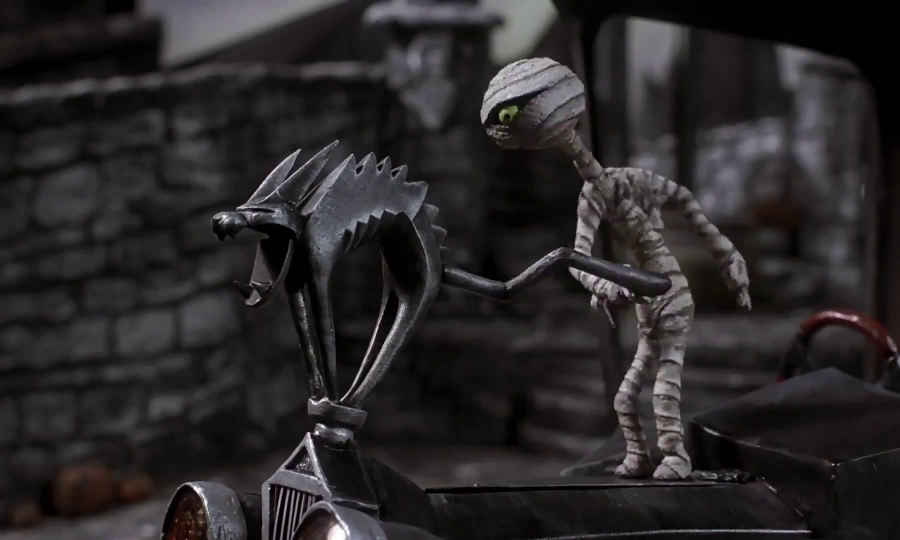 Come to think of it, in all the monster-packed media I've consumed throughout my life, mummies with an actual, ordinary human corpse under the cloth are quite possibly the least common; they may at the very least have strange, impossible proportions, and those with a single eyeball sometimes sport it smack in the center of their head, like the thing inside is some kind of cyclops.

In another confusing twist, I've also repeatedly seen what I can only refer to as the "Medical Mummy," like Mummy Dog and Mummy Papa from Gregory Horror here. This type of mummy shows signs of recent injury, sometimes appears in a "Scary Hospital" setting, and most importantly of all exhibits fresh, red blood stains or actively oozing, dripping blood.

The bloody mummy directly contradicts the basic definition of a mummy as a dried corpse, and I've seen it almost exclusively in Japanese media. Even this costume is from Japanese Amazon, and I have more than one blood-dripping mummy toy of obvious Japanese origin.

And then, AND THEN! We've got the cartoon trope of a mummy with nothing under its covering, except perhaps a few bones or, in the most delightful cases, a couple of eyeballs that might bounce to floor in confusion as the "mummy" is unraveled. Adorable, but what in the world is supposed to be going on here? What does it actually even MEAN to be a mummy?!

Given the evidence, I think we can conclude that there are basically two kinds of "mummy" populating the Halloween landscape. One is the traditional, cursed Egyptian corpse that doesn't necessarily need the bandages to be a mummy, and the other...is the bandages.

This can probably happen in a number of ways. The traditional, reanimated corpse type of mummy may very well become powerful enough that its soul extends into its own wrappings, which we've seen already in those mummies who manipulate said wrappings as appendages. However, should the corpse itself be destroyed - or even wear down gradually into dust - a fragment of its consciousness may be left behind in whatever it was wearing, and these haunted wrappings may have been capable of taking almost any new body as a host.

This, perhaps, may have inspired later magicians, necromancers and witches to craft their own haunted bandages without even the need to start with a corpse, directly binding a spirit to the cloths that could simply "puppet" a desired body as needed.

I'm really not sure what, if anything, we should even call these particular creatures. I kind of like considering them "mummies" of just a slightly different kind, or almost a different "life cycle stage." Perhaps they're not really considered a mummy without a body inside, but anything can become that body.

WHAT DID YOU DO TO YOUR BABY

Ideally, a mummy's bandages find themselves an already dead body to intertwine with, and they're probably content for as long as that body holds together. If they find something alive, however, they'll suck the fluids out of it until there's nothing left and then have themselves a proper "mummified" corpse-puppet. If they're powerful enough, though, they can give life to even something totally inanimate, and perhaps even grow a set of eyeballs or other organic components. Naturally, only the oldest and mightiest of "mummies" can exist with no solid body at all, but they do temporarily destabilize if they're forced out of whatever shape they're holding.

As for those "medical mummies," I think that should be obvious; what better spooky hijinks than to cast the same spell on a closet of medical supplies?