WELCOME BACK EVERYBODY, and any brand new readers! We're now entering reviews for the ninth generation of Pocket Monsters, 2022's Scarlet and Violet! I'm afraid my disappointment with the direction of the games themselves hasn't improved much since the last generation; they still feel like a shadow of their former selves as long as hundreds of Pokemon are permanently locked out from transfer, and I still find the actual gameplay to be too easy, too shallow, too thin when compared to other monster titles or even older Pokemon games I've since revisited.

Pokemon designs, however, remain as exciting to me as ever, and I'm happy to say I have many new favorites from the Scarlet and Violet generation; far more than Sword and Shield, possibly almost as many as Sun and Moon.

I'll be releasing these reviews slower than usual, possibly just a couple per week, which means you can look forward to reading these throughout most of 2023, during which I'm sure we'll even see a handful of DLC additions. 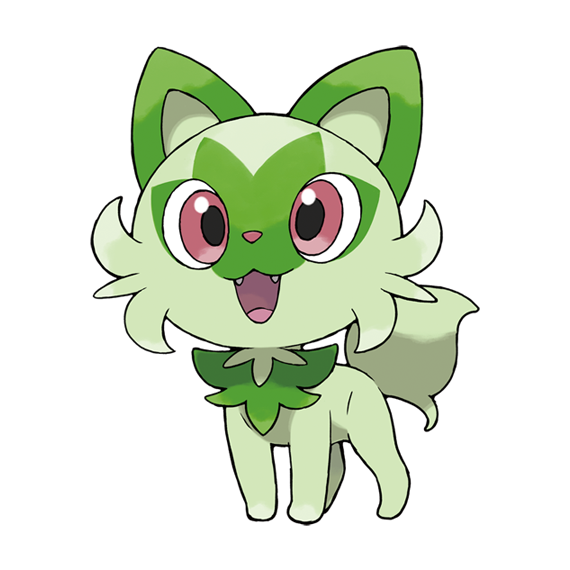 After all that, however, I'm sorry to say I'm not exactly blown away by the new grass starter, Sprigatito. It's cute, yes, but we've already had a kitten themed starter Pokemon, and it doesn't offer any interesting visual gimmick or twist besides a green cat. According to its Pokedex, it mesmerizes others with its sweet scent, but this is something a majority of grass type Pokemon can do; I could just as easily see this as a starter in a less inspired knockoff of bootleg game. Sorry, Sprigatito. 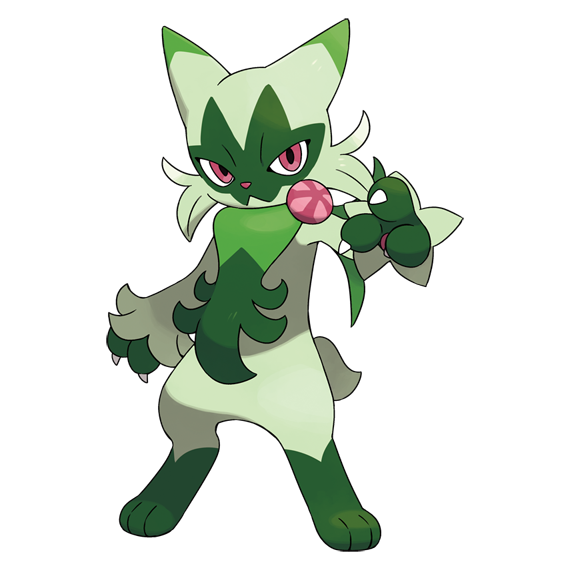 Every generation now, everyone roots for the starter Pokemon to remain quadrupedal animals instead of almost uniformly standing up as they evolve, but no such luck here; Sprigatito goes anthro as soon as it evolved into Floragato. It's otherwise a little more interesting than its predecessor, however; the dark green marking on its face looks more like a jagged leaf-shaped eyemask, and it battles with a "hardened flower bud" attached to a "vine" that functions as a bladed yo-yo, which is fairly novel! 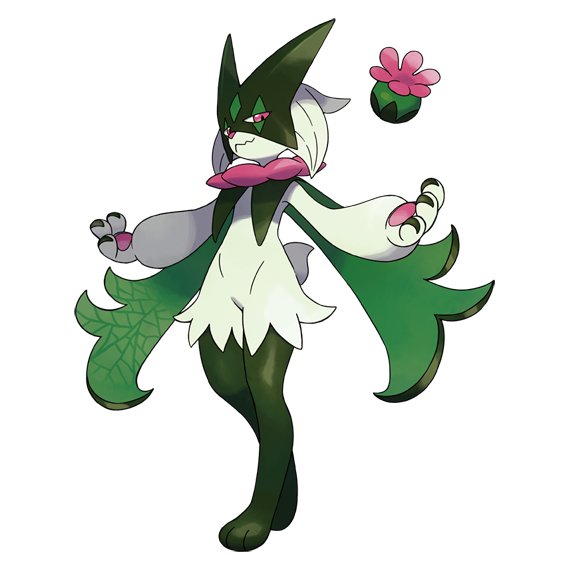 Finally we have Meowscarada, a lime green bipedal cat with a four-pointed, dark green (almost black) eyemask and narrowed, purple eyes, both grass type and a surprise dark type! There's also a leaflike "cape" split into two, like wings, and a little flower thing that appears to hover near the head. The dex inexplicably explains that this is attached by a "camouflaged" stem, so it "appears" to float, and I don't know why they didn't just say it can float, though I guess I forgot when I first wrote this that this Pokemon is supposed to be a "magician," which uses trickery instead of actual magic, and that's a novel use of the treachery and deceit theme of dark type! Jeckparadox also brings up in the comments here that the Pokemon animates a little puppet-like, and you can interpret the "flower" almost as the strings of a marionette. Instead of a yo-yo, it also attacks with organic "bombs" it can attach to surfaces, which is neat, but totally should have been represented by a new grass-type entry hazard, I think.

I have to say I'm not into the mostly minty color scheme of this one, and I feel either greener fur or whiter fur would have looked better. I'm also kind of overall indifferent to there being another humanoid cat (or cat in general) in Pokemon, and it's a shame this is the first grass starter I really can't match up with an extinct animal. There's plenty of extinct cat species, sure, but this could be an anthro of literally any generic feline imaginable.

That said, I'm plenty entertained by this being the second cat Pokemon (after Purrloin) that references the same classic anime character, this time much more explicitly. It's totally Doronjo! 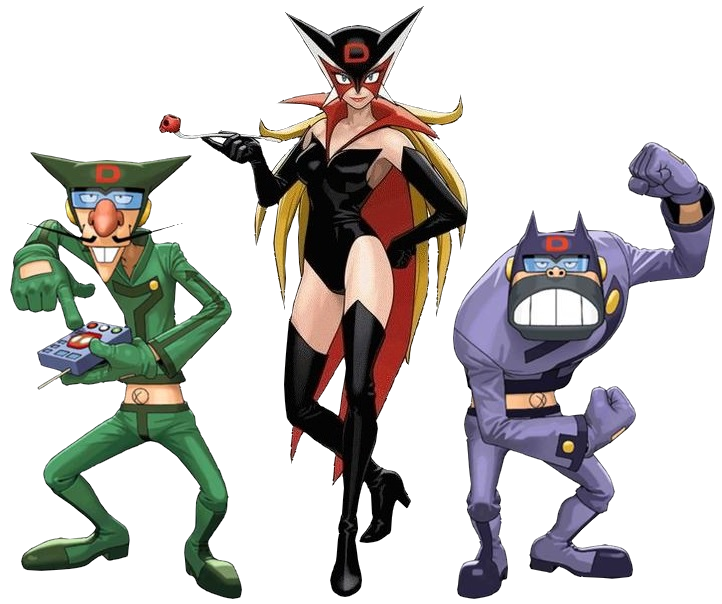 The Doronbo Gang were the main antagonists of 1977's Yatterman, the second series in the Time Bokan franchise. Fancying herself the world's most irresistibly seductive criminal genius, Doronjo and her two henchmen (one of whom also inspired Wario!) are masters of disguise to everyone but the viewers, willing to do anything for fame, fortune or the approval of their mysterious boss, unwaveringly confident each and every day that their latest scheme is their most foolproof and completely oblivious to the fact that they all share the same braincell as they miraculously survive one humiliating, explosive defeat after another without cracking.

In other words, Pokemon's own Team Rocket were always a direct nod to these characters, with Jessie virtually conceived as a 1:1 knockoff of Doronjo. They even had a "motto" repeated every episode, though for the Doronbos, this was an entire song: While the aforementioned Purrloin shares the mask design and love of thievery, it's cute to have a Pokemon more overtly referencing the original inspiration behind one of the anime's most beloved characters...one we may not be seeing around much anymore, as the original Pokemon anime has finally, finally ended for good by the time of this writing, as far as we know, with a new series full of new characters set to replace the adventures of Ash and Pikachu.