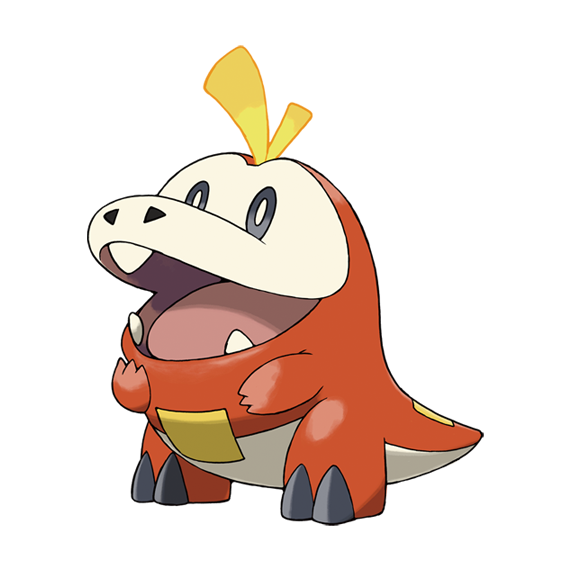 Can you believe this little crocodilian is the first reptilian fire type starter since the original Charmander?! I mean in the classic sense of "reptilian," not the taxonomic sense, which would include Torchic. But if we do count Torchic - and crocodilians are in fact more related to feathered birds than they are to lizards or snakes - that's still over 20 years of entirely mammalian fire-type starter Pokemon. Crazy! Everyone knows the fire element belongs to scaly monsters!

Fuecoco is fairly cute, too. It's a really pudgy little gator with a white, masklike face and beady little black eyes. What it instantly reminded me of was the classic arcade game Dig Dug, because it has the aesthetic of the game's "Pooka" enemy with the fire breath and reptilian anatomy of its only other monster, the Fygar! 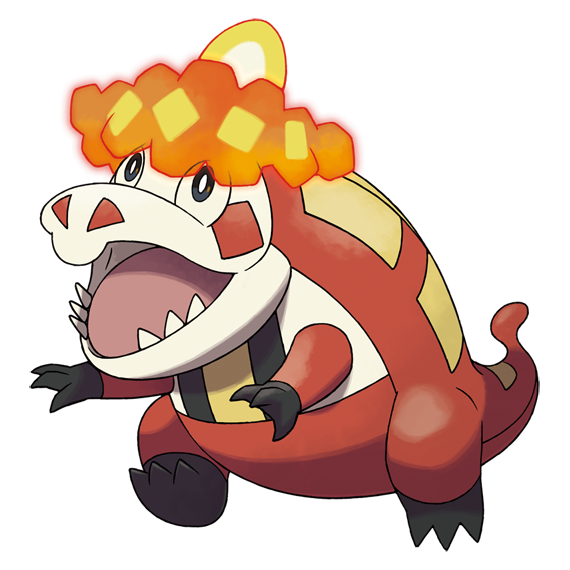 When it evolves into Crocalor, the little critter becomes a bigger, more barrel-shaped croc whose facial markings are beginning to resemble a Dia de los Muertos skull, and I've also seen some interpret its overall design as reminiscent of a pinata. Most unusually however is what resembles a bird's nest, complete with a bird's egg, resting on its head like a sombrero and made entirely of fire. We're going somewhere interesting, here, for sure. 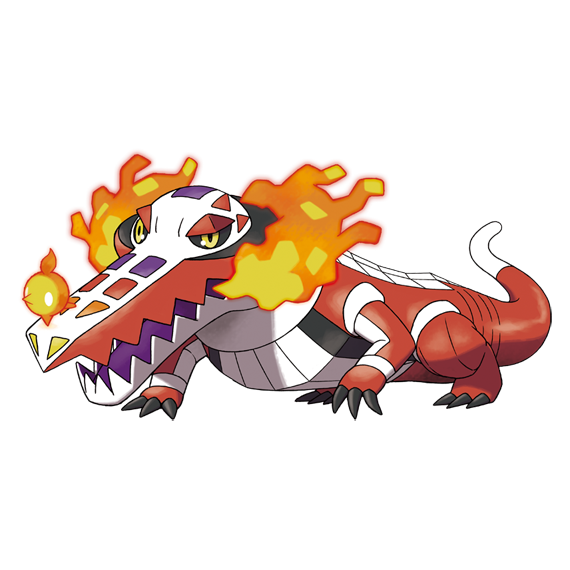 The final stage is Skeledirge, a Fire/Ghost Pokemon with...quite a bit going on. At long last we have a quadrupedal beast for a starter, even if it stands upright for a lot of its attacks, and in fact this is the first-ever fully evolved fire starter that usually stands on all fours! I bet some of you misremembered Typhlosion as a quadruped, didn't you? Nope, that thing stands, fights, and even walks on its hind legs. If you didn't realize that until now, it will probably bother you forever.

Skeledirge is not only ghost type, but looks even more like a paper mache decoration wearing festive skeleton makeup, now with bushy hair-like flames surrounding an elongated crocodilian skull, and this spooky turn was actually foreshadowed already when it was a little bitty Fuecoco! Scarlet and Violet take place in the Paldea region, analogous to Iberia. A crocodile is a cocodrilo in Spanish, but Coco on its own can refer to a human head, a coconut, or a skull, and it also informs the name of a bogeyman-like spirit, sometimes Cuca if we're specifying a female or Cucuy for males, well known to just about every child growing up in Spain or over a dozen other countries. In Portugal and a few other places it's even what they call Halloween Jack O' Lanterns, and it's quite often assumed to be a crocodile-like monster - especially in Brazil, where a long-running children's series has featured a beloved Cuca (above) for so long that she's gone through several redesigns over the course of generations, but never stops looking fabulous.

The Coco features in multiple songs and lullabies around the world, usually about its appetite for bad little boys and girls who worry their poor mothers. Children who don't listen are basically the bacon of monster cuisine, aren't they? This association with poem and song could possibly be why Skeledirge also has a musical angle to it, not to mention that crocodilians themselves essentially "sing," but this brings us to the Pokemon's most outstanding feature of all: its LITTLE FRIEND! I didn't upload giant-size animations of every Pokemon (too hard on the internet tubes) but a closer look is definitely warranted here:

Perching atop Skeledirge's head is a sentient fireball in the shape of a little tiny bird! An adorably stylized little orb with big, glowing white dot eyes and simple points for its beak, wings and single "leg." This "hatched" when the fireball "egg" atop Crocalor "gained a soul," and from where, we do not know. The whole idea was probably inspired by the belief that small birds have a symbiotic arrangement with crocodilians, cleaning their teeth as their bigger, scalier cousins hold their jaws open for them. Now, some of you may know the truth already, but others may be shocked to hear that this world-famous, extremely pervasive example of mutualism is more than likely a lie. It has never actually been documented or observed anywhere in the world, at any point in history that we know of, and any photographs you find online are actually photoshopped by people who couldn't find a real one but made their own under the assumption that it was still true.

There IS, however, one way in which certain birds are believed to strike up a deal with crocodilians, and it is hilariously more morbid, with more than one species believed to deliberately push some of their own young out of their nests as incentive for hungry crocs to hang around. The ancient water monsters get a snack, and the newer air monsters get a free bodyguard from predators that can actually climb, like raccoons. Haha. I don't know if gamefreak really did that research, but it's certainly appropriate that Skeledirge's baby bird is a ghost. Skeledirge is so named because it loves to sing, and when it uses its "torch song" signature move, the little bird hilariously becomes a "microphone" the beast croons into before morphing into a larger phoenix-like shape and rocketing into the enemy! They really had a lot of fun conceiving of this wacky duo, and it's a clever reasoning for the ghost typing. As first pointed out by twitter user Dandyande, the patterns on Skeledirge's upper surface even resemble a stadium seating chart, positioning the little bird as the lead singer! It even tends to stand on the top of the croc's scalp, between the flame-hair, before moving down to the snout as if stepping out of a "stage" and down a "runway!" Some have noted that just as Meowscarada broke the grass-type tradition of "demonstrating evolution" or extinct fauna, this is the first fire starter you can't arguably fit into the Zodiac...but does that necessarily mean the starter themes were dropped? We'll talk more about that in our next review, since this is already going on a bit long. In fact, I believe this is the longest I've ever written about a starter, which we can chalk up to just how any fun little layers they packed into this one, blended well enough that even if you don't catch any of its motifs beyond a "spooky fire crocodile," that still works just fine.