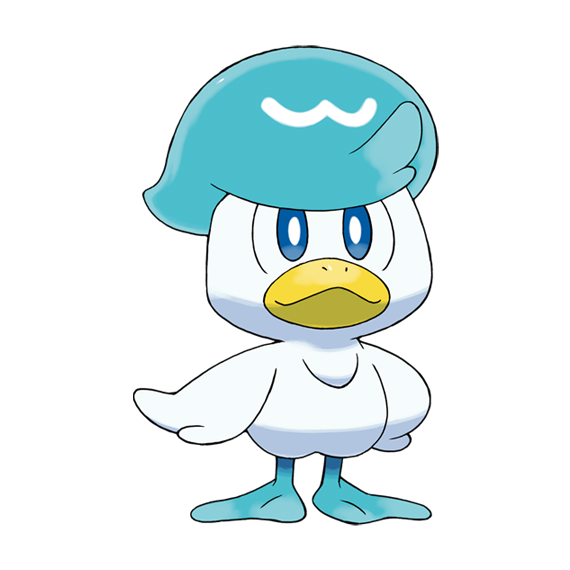 The water starter this gen is a duck with a water pompadour. That's a little more than Sprigatito had going on, but a duck isn't exactly the most inspired choice for a water starter. Pretty easy and obvious, honestly, even if it's probably a fairly specific reference to a "crested" duck, which also has a hilarious giant poof on top of its head. Every water type starter is based on an amphibious vertebrate however, and just a few that have yet to be water-type starter Pokemon would include a beaver, newt, platypus, marine iguana, hippo or capybara, and if they were going to do a waterfowl they could have gone with a goose, a swan or a loon. This even could have been a flamingo, what with that being a wading bird, but a flamingo is going to come later in this gen. 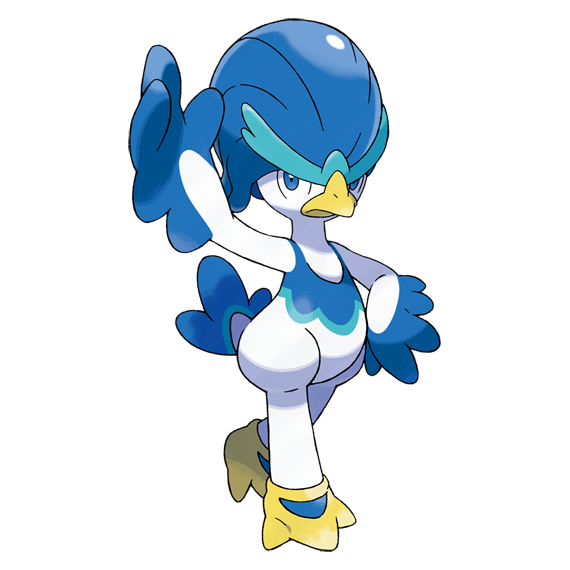 Quaxwell at least has personality, I suppose. It's a duck with thick, powerful legs that loves to dance, and its watery hair plumage forms a bigger, more bulbous coif along with a big W-shaped crest, like exaggerated eyebrows. It's kinda funny how its feet are designed like shoes, like the leg is even going down "inside" the foot. Weird! 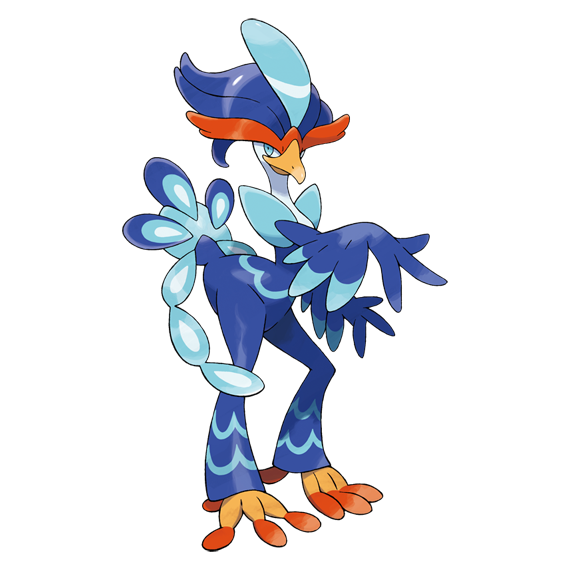 The water/fighting Quaquaval is certainly something, though. A tall, lanky humanoid bird which, actually, doesn't bear any resemblance to a duck at all! Besides the pair of more peacock-like tail feathers, it has a hooked little beak instead of a bill and it has even longer legs than Quaxwell with bizarre-looking splayed toes, rather than ducky webbed feet. Those toes actually look like those of an entirely unrelated water bird; a COOT! Coots are also distinguished by their almost entirely black body and white beak, which I'm sure a Pokemon version would have lifted, but they belong to the Rallidae or "Rails," which have a number of other aquatic and semiaquatic species, among them the dazzling Purple Gallinule: This Pokemon's focus on dancing and kicking would be in line with the large, prominent legs of this group and the beak shape is also a match, so I'm going to say that by its final stage, this line is much more rail than duck. HOWEVER, it still has those "peacock feathers" formed from water, and the huge crest on its head, and the fact that it fights by kicking is something more associated with roosters. It's almost like this Pokemon is a chimera of various territorial, male fowl. An amalgamation of cocks, if you will, and if you're done laughing at that combination of words you may realize that a cock is one of those Chinese Zodiac animals, one that's even been a fire-type starter once before.

I'll admit, I've never been that strongly attached to the starter themes and patterns, and I wouldn't have really had any problem with Gamefreak dropping them, but I think it's impossible to deny that they've been intentional since at least the third generation, and that in generation 9, they've actually just been "shifted" rather than dropped. Water starters typically have something to do with some kind of "weaponry," but this time it's the grass starter that has a weapon gimmick. Grass types typically demonstrate "evolution" as a theme, but that's present in our bird and crocodilian fire starter. The themes basically "rotated clockwise," each Pokemon "stealing" it from the one they were super-effective against.

This is all in addition to the fact that the three have an "entertainer" theme - magician, singer, and dancer - but it's also been suggested by some fans that if Meowscarada is indeed a reference to Yatterman's Doronjo, then Skeledirge may be intentionally reminiscent of the series goofy dog mecha Yatterwan, and Quaquaval may parallel its lead hero Gan-chan. That may be a bit of a stretch individually, but put them all together and there's certainly something there: