Five Real Creatures That Belong in a Survival Horror (Part One???)

I used to strictly avoid basing any of these posts on just my own original ideas, but none of you ever seem to actually mind that, and ever since finishing up the Resident Evil monster reviews I've thought a lot about the kinds of creatures I'd personally love to see get the B.O.W. treatment in that setting...and if you're not a big fan of that setting, it doesn't even matter, because this is basically going to just be a list of animals I'd love to see as horrifying mutant monsters in general, and not even just in fiction! If "genetic engineering" worked at all in real life like it does in a Survival Horror game or a Superhero comic, it absolutely would have been my foremost pursuit in life and there isn't any moral question on this Earth that would probably stop me from playing with fire.

Whether you want to see this as my Resident Evil fan-monsters or not, I'll also be explaining the biology of some organisms some of you may have never heard of or just never fully appreciated, and if you want me to do more of these, I will! 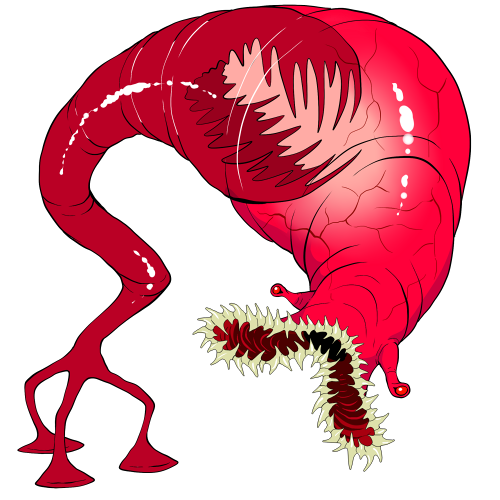 I have an entire article on rotifers here, and it even already comes with my take on another "monster" interpretation! The short version is that the typical rotifer is a microscopic animal with a crushing set of jaws inside its tubular body, a single three-toed leg, beady red eyespots and a bizarre "wheel shaped" mouth structure lined with tiny, beating cilia, which create a whirling vortex of suction into the creature's mouth!

GAME ROLE: I feel like this should be a fairly large monster, and initially encountered as the source of a "whirlpool" in something like a sewage pit, as though the creature was used as a living garbage disposal. With the water drained, it might seem at first like it's been helplessly stranded, but its single leg would allow it to scrunch up and leap into the air, while its "cilia" would basically operating like an organic chainsaw lining its maw. 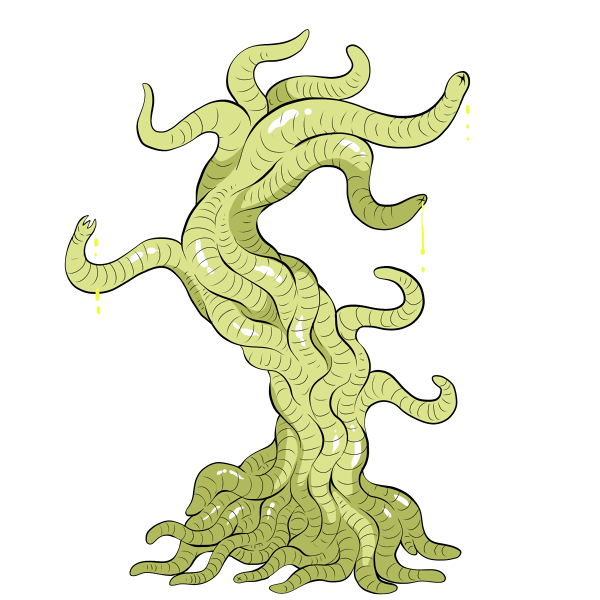 Various nematode species are specialized killers of arthropods even hundreds of times their size, utilizing their tiny jaws to penetrate the exoskeleton of a passing insect and tunnel into its body. This is not parasitism, however, because the worms do not feed on a living host; rather, they regurgitate a cocktail of unique symbiotic bacteria to kill the "host" by sepsis within 48 hours. These bacteria are the worm's true sustenance, converting the victim's corpse into a temporary biome where the worms can feed, grow and multiply.

Some of these worms slither like snakes as they actively hunt for insects. Others lie in ambush, waving their long bodies in circles as they wait for a victim to pass by. There are even species that link their bodies together to form larger "towers" of worms, and still others that coil up like springs and launch themselves at prey. Perhaps their most surprising adaptation of all are those whose symbiotic bacteria are bioluminescent, causing infested carcasses to glow in the dark for reasons we still don't understand.

GAME ROLE: everything about these insecticidal maniacs is more terrifyingly eerie than just about anything else in nature, but we tend to overlook them because they're tiny and they only afflict insects, clearly one of mother nature's most embarrassing oversights. Combining multiple species together, I could see tree-like clusters of worms sprouting up from luminous cadavers, launching springy larvae at passersby, or even luminous zombies whose bodies undulate with transparent worms. None of these are mechanically unique concepts, but they sure feel atmospheric. 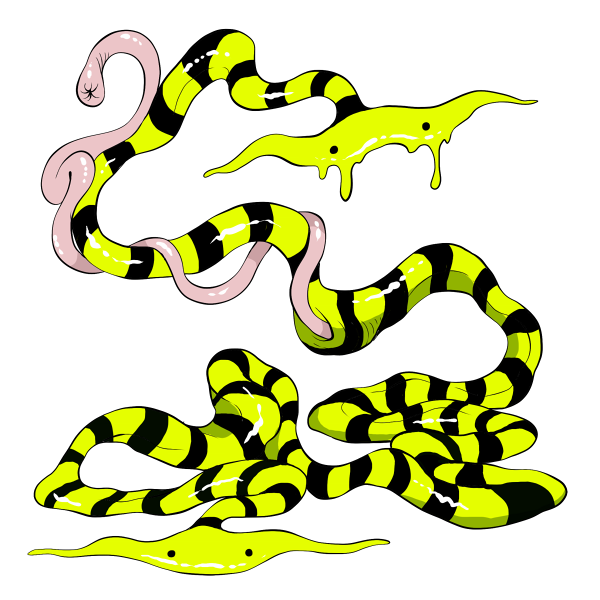 Platyhelminthes, or flatworms, are remarkable animals for their anatomical simplicity. The most familiar are the tiny planarians found in freshwater environments and some of the dazzlingly colorful marine species, but there is also a plethora of large, striking, almost universally carnivorous terrestrial examples. Those of the group Bipalium, or the "hammer headed" flatworms, can even demonstrate fairly impressive land speed as they track prey, their broad heads densely packed with chemosensitive cells that scan for the slightest "scent" of appetizing earthworms, snails or insects.

These worms can also produce remarkably thick, adhesive slime, allowing them to not only scale any solid surface but cling instantly to prey like a strip living flypaper, lay down a trail sticky enough to function as a trap and even dangle from a strand of slime in a spider-like manner. Mid-way down the animal's body is also an eversible pharynx, a feeding tube from which it can flood its slime-drenched surroundings with digestive enzymes so powerful, a struggling insect begins to dissolve and die within seconds.

This should all sound impressive enough, but an especially amazing characteristic of the flatworms is that they can continue functioning in pieces and eventually regenerate into multiple worms. Even without the eyespots, sensitive "hammer head" or pharynx, any given scrap of flatworm flesh still possesses the cellular resources to continue tracking and dissolving prey without missing a beat!

GAME ROLE: it's colorful, gooey and even kind of cute, but everything about this organism is formidable to deal with. Even if it doesn't move as fast as the player, its pursuit would be relentless and almost inescapable as it slithers effortlessly over obstacles and through the smallest gaps, all in total silence. Few if any weapons would have any effect on the creature, and its mutations might allow its severed portions to regenerate almost instantaneously. Finally, even touching this monster would seal your fate, as it would cling to you like glue and already begin to dissolve whatever it touches.

Maybe it's overpowered, but it would be pretty tense to be pursued by such a thing as the focus of a particular area, at least until you figure out that, like the real thing, the creature can be destroyed by ordinary salt. 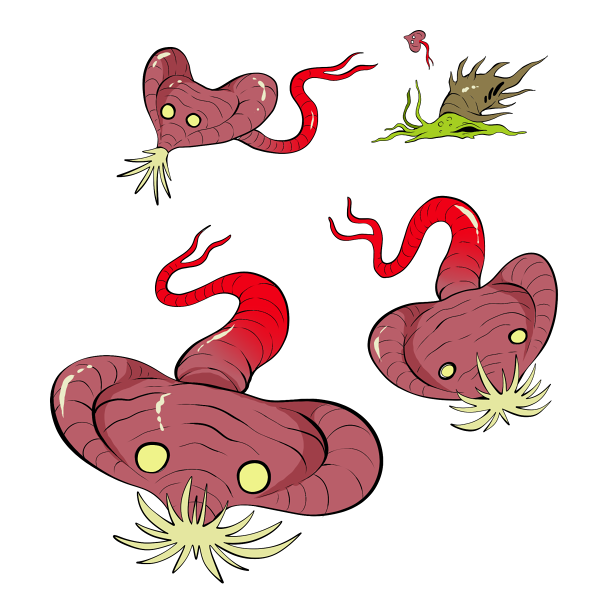 The Trematodes or "flukes" are remarkably enough another group of platyhelminthes, but parasitic rather than predatory. Most species have an aquatic or semiaquatic life cycle, and their most common intermediate hosts are aquatic slugs and snails, effectively turning the mollusks into mobile nests where the parasites continuously multiply and emerge as larval cercaria.

These tadpole-like organisms are remarkably mobile in their liquid environment, employing chemosensory - like their distant Bipalium cousins - to zero in on their next host and a set of sharp hooks, enzymes or both to drill their way into flesh. Several serious illnesses are already caused by infestation in humans, and even species that do not naturally parasitize our own will still attempt to penetrate the skin and subsequently die, causing a condition sometimes known as "swimmer's itch."

GAME ROLE: it occurs to me that this monster would already have a lot in common with one of my existing favorites, the Nautilus! In this case, however, the "mother" creature would be the host snail, which might not be as weird and fascinating as the Nautilus, but might be a lot larger and lot more mobile. It would be interesting if the snail itself might be entirely unaggressive and no threat at all on land, but the cercaria begin to emerge when the area is partially flooded. I could see a lot of problem solving involved with this. 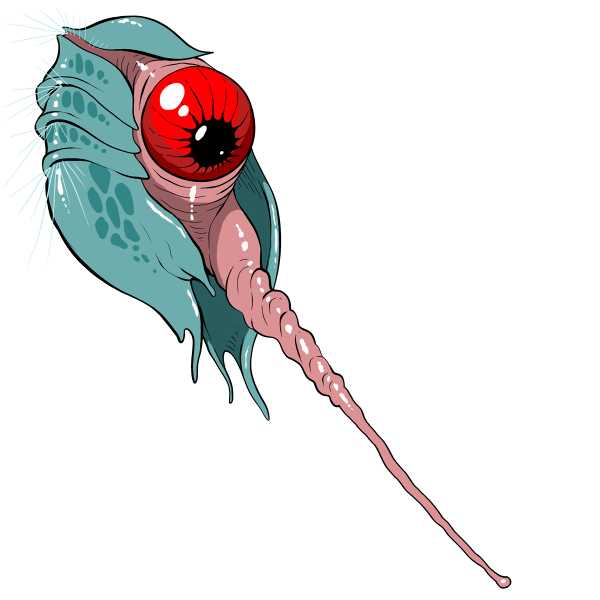 I feel as though unicellular life is the most critically unexplored resource in this very real line of work, and you would be surprised just how formidable some single celled lifeforms can become. Dinoflagellates are even generally considered an "algae," and include some organisms responsible for toxic "red tide" algal blooms. Other species, however, are solitary scavengers, parasites and yes, even predators, most stunningly of all the Warnowiids. Many members of this group possess tough, shell-like outer cases and multiple dart-like organelles similar to the stinging nematocysts of jellyfish, but even more remarkably, several species possess a complex "occeloid," essentially an eye, formed from specialized organelles and even highly modified, symbiotic bacteria.

Erythropsidinium has one of the largest and most powerful of these eyes, and while it doesn't boast the battery of darts, it does possess a single sucker-tipped "piston" that can instantly shoot out to over a dozen times its length, like the tongue of a chameleon, which this single cell of ""algae"" uses not only in prey capture but in locomotion.

GAME ROLE: the visual effect of this enemy would be that of a "floating eye," having mutated to drift in the air or suspend itself by its piston. Functionally, it would occupy a role like a biological security camera with a mounted "gun," its piston powerful enough to impale a human body, deliver some kind of venom or generate an electrical shock. Its one fatal flaw, however, might be that its piston only aims in one direction, and with no other appendages, there's nothing it could possibly do if you simply held it by its other end...but it would still wildly attack everything in front of it, making it an effective makeshift weapon or even a grappling tool.