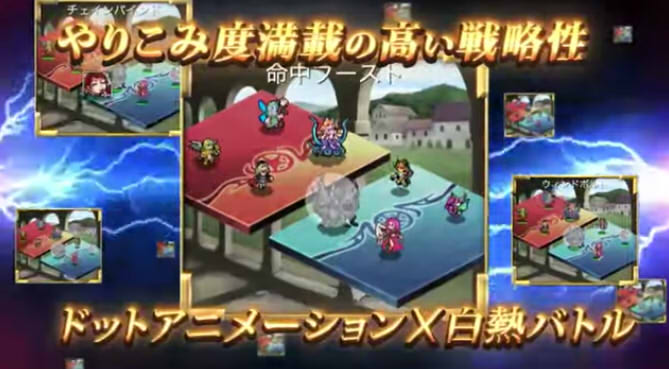 It sure is hard as hell to find any information in English about the Japanese tactical RPG known as Elder Sign, and that would likely be because there's already a wildly successful American dice-rolling tabletop game known as Elder Sign...and I guess also because the game we're reviewing today is now completely DEFUNCT and unplayable, because we live in a dystopia where entire pieces of media can be "online only" and lost for eternity.

But anyway, the title comes from the Mythos universe associated with H.P. Lovecraft, and both games are packed full of creatures from that setting, but that's about where similarities end. I wouldn't even know of its existence if someone hadn't been nice enough to email me a few of its creatures just the other day, and like all the greatest game franchises, this seems to be one focused more on battling with rather than against monsters.

I don't review a lot of Mythos critters, granted, but I still like a lot of their designs and concepts even if I'm not a big fan of Lovecraft himself or his particular writing style. Many of them look more interesting in this game's official artwork than I've almost ever seen in any other portrayal, and the game isn't limited to Cosmic Horrors either, also featuring various ghosts, youkai, cryptids and fairies! After browsing through its entire vast bestiary, I've picked out the 31 monster designs I just find the coolest. 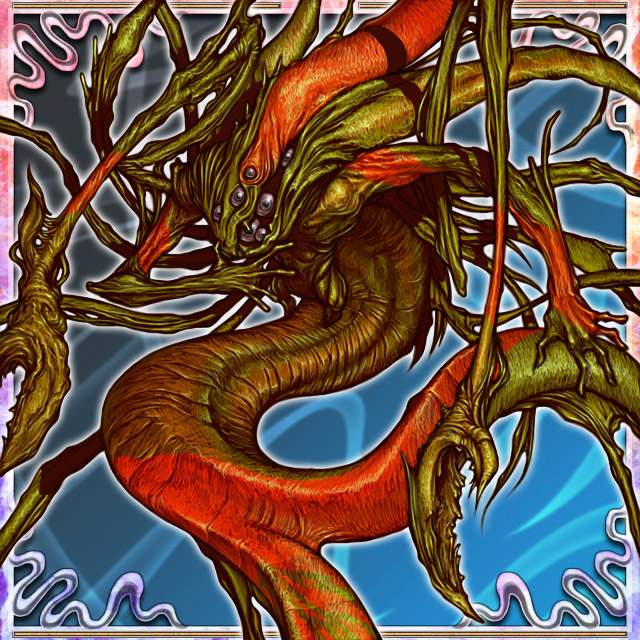 So, for our first example, WOW! The character Yig is a god of snakes originally appearing in stories written with author Zealia Bishop, who was a friend of Lovecraft. The being is usually depicted as a giant snake or snake-man, but here he's envisioned as a bizarre, winding monster with some arthropod-like aspects, emaciated human arms and such a gorgeously bizarre, asymmetrical face with multiple eyes both in and around a darkened, vertical crevice. The crevice evokes a mouth from some angles, but there's otherwise no certain facial features other than those clustered eyeballs.

It's just such a fantastic design, somehow appropriate for a snake god even while looking more like a hybrid of a plant, a crustacean and a fish, if anything. It's also worth mentioning that the original Yig in Zealia's collaborations is almost harmless, even benevolent, so long as you're kind to actual snakes...and what decent human being wouldn't be? 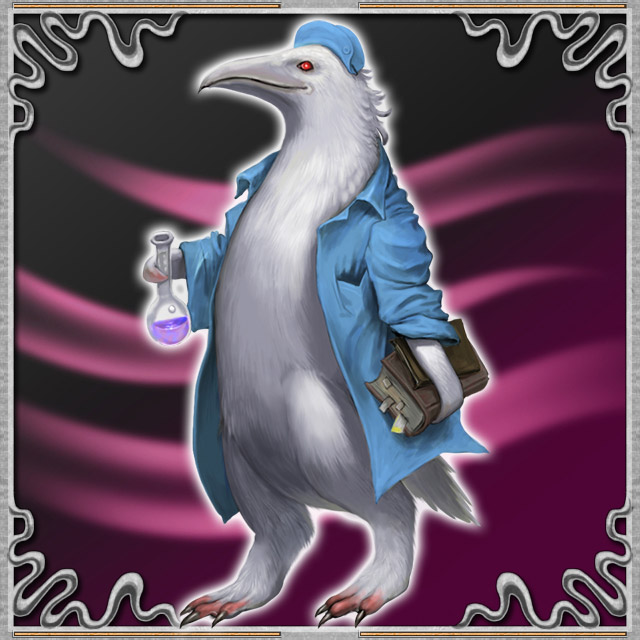 So I wanted to impress you with Yig, but before we move on to some other exceptional designs, here's a penguin dressed like a little doctor. Albino penguins come from Lovecraft's At the Mountains of Madness, but in this game they've been interpreted as having human-like intelligence for whatever reason. 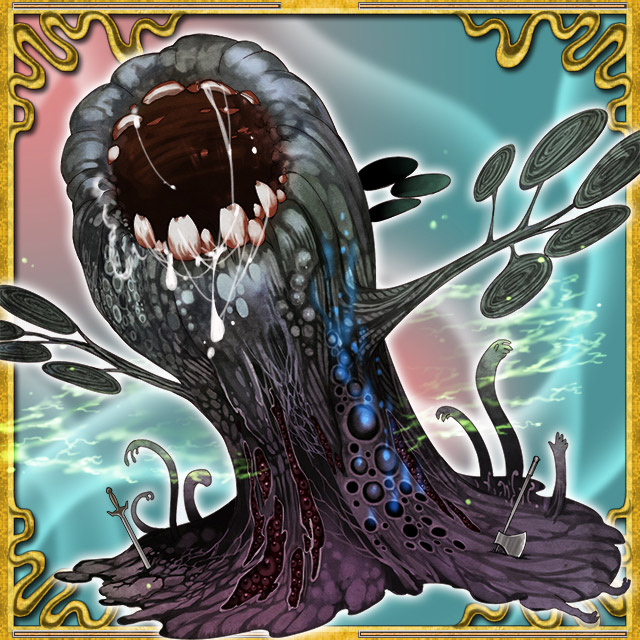 I do really like these guys, from Ramsey Campbell's The Insects from Shaggai. I actually reviewed a version of them last year, but to recap, the titular insects are "pigeon-sized" mental parasites that originally conquered the planet Xiclotl and enslaved this race of vegetable-like creatures. They supposedly lived this way for quite some time before the insects ever really noticed that their slaves still made sacrifices to something living in a gigantic pit, and when they discovered what it was, the insects fled the planet in terror.

(It was a big gross plant.)

Xiclotlans themselves are described as stalk-like beings, but here they've been interpreted as more amoebic looking blobs of blackish flesh and pustules. The big, toothy mouth on top almost makes its overall shape resemble a broken-off, hollow tree stump to me, and the little ghostly humanoid arms waving around from its gooey base are a really interesting touch unique to this artist. 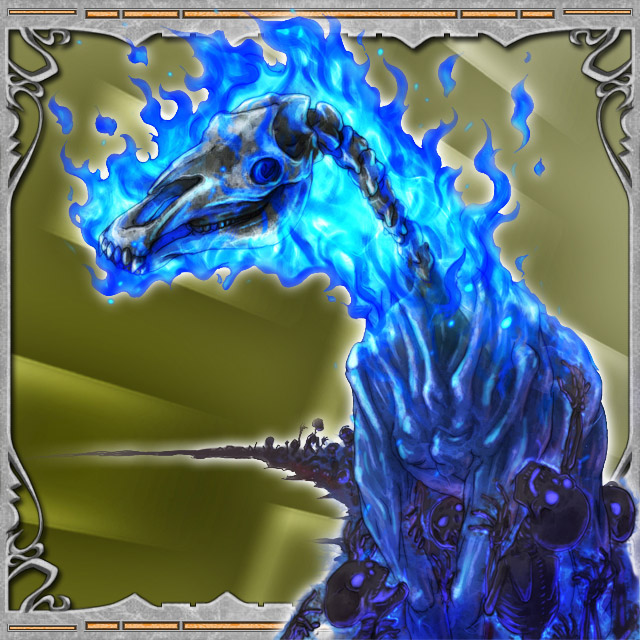 I mentioned that some of these are "mythological" creatures. The Pale Horse is a reference to the horse ridden by death in the book of revelations, though some have argued that the horses weren't meant to have literal riders at all; that being "ridden by death" simply means that the horse brings death wherever it goes. I've almost never seen that interpretation depicted in any piece of media I can think of, and it is illustrated here in a magnificently disturbing way. Did you even notice the blackened, human skeletons climbing up this flaming skeletal equine? And did you notice the ghoulish procession of animate corpses leading off into the distance like a grisly snail-trail??? This is frankly so amazing of a visual concept I'm distressed that it's only part of a game bestiary. This deserves to be the focus of an entire dark fantasy story. 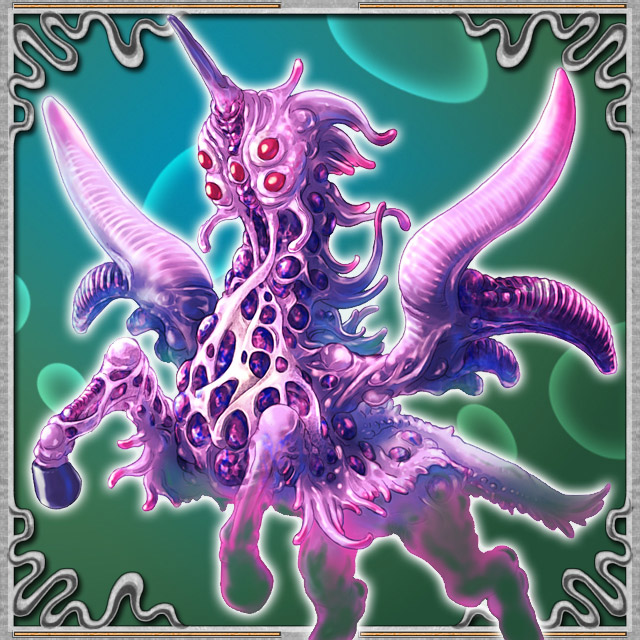 THis is a pretty obscure choice! Maybe some of you are familiar with the Flying Spaghetti Monster, a satirical god invented to demonstrate that you can pretty much just make up any god you want, but that started only back in 2005. The Invisible Pink Unicorn is the same exact concept, but concocted by a philosopher back in the 1960's.

The original text doesn't describe the unicorn in any particular way, what with her being invisible, but it DOES describe the unicorn's arch nemesis, the Purple Oyster, which transforms human souls into purple pearls that live in eternal torment. Kind of interesting, then, how much this take on the unicorn feels like a mollusk herself. LOVE those weird fleshy wings! Wow, describing these monsters is actually kind of lengthy so far...I don't think I should do all 31 one on one page, actually. Let's split them up. I'm going to go right back up to that title and promise to split them up. 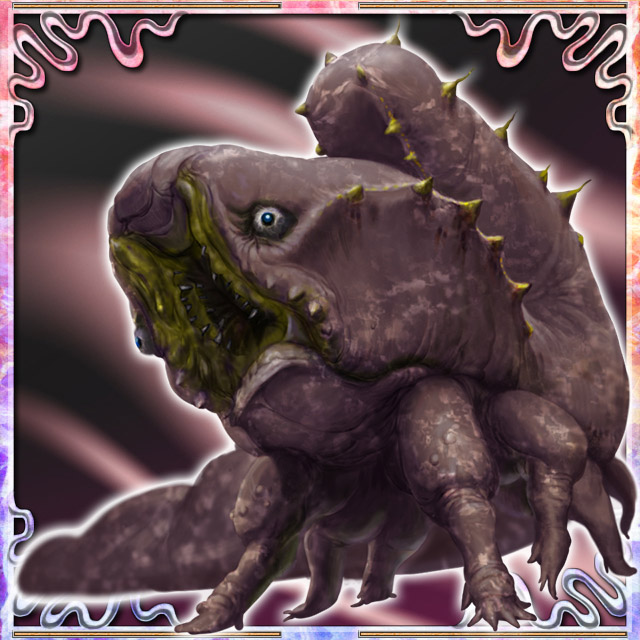 But now I just said all that, and I don't know if I have enough to say about the Dhole! Dholes are just passingly mentioned in some Lovecraft thing as giant slimy worms deep within the Earth, and we never really find out more than that, so I'm glad this artist took the opportunity to do whatever they wanted with that image. That face is SUPREMELY freaky with those pained, all-too-human looking eyes! It's lovable and precious, but even I can see it being deeply, deeply frightening to imagine these things far beneath our feet, living in darkness, never knowing we exist or vice-versa. 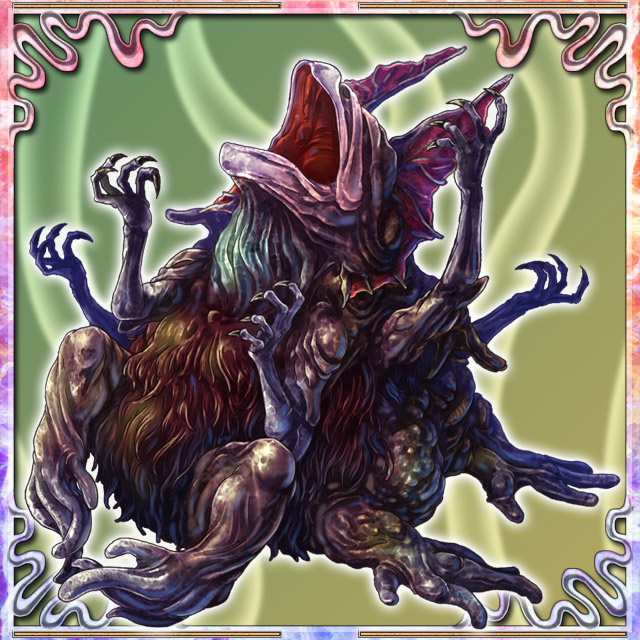 I've laughed about Tsathoggua before. It's a "deity," like Cthulhu, but it was described as a fat, furry mammal with floppy ears and giant, sleepy half-lidded Garfield eyes. I wish that aspect had been kept in this design - it doesn't really feel like Tsathoggua without the Garfield eyes - but I appreciate their effort towards making the rest of it actually look pretty ghastly. 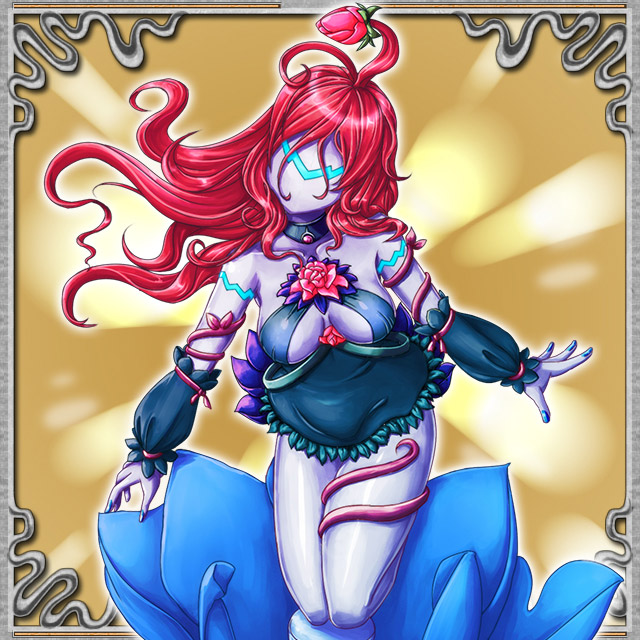 I include this more because it's silly than anything else. Vulthoom is a giant plant mentioned in another Mythos story as the thing Martians have instead of Satan. I have no idea why Elder Sign decided to depict that as a sexy robot-like plant girl, but it did. 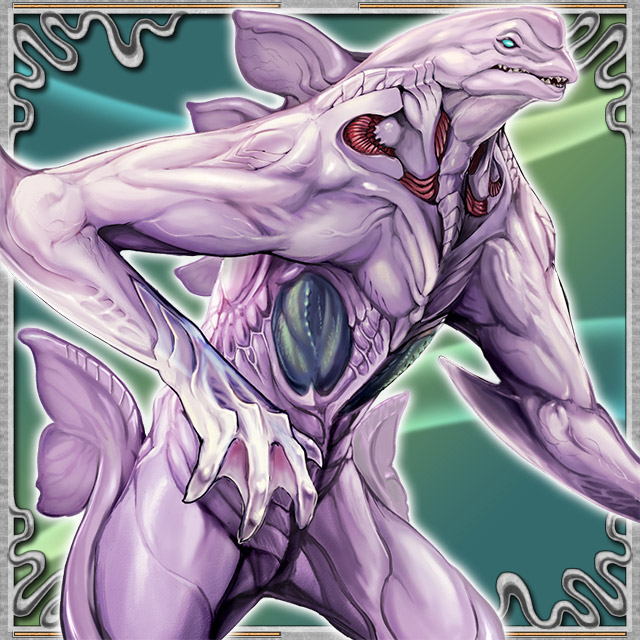 Oh man. It was so long ago that I started featuring creepy, monster dolphins in my own work and it started as kind of a humorous thing, just to counter their unrealistically gentle depiction in so much media, but by now, I kind of do take them seriously as threatening predators and cool monsters, so it's great to see it done anywhere else, too! There's an orca whale and shark variant on this design, but the pink dolphin is really the best looking; genuinely menacing as hell! Notice it doesn't have a tail, either, but each leg ends in a fluke-like flippery foot! 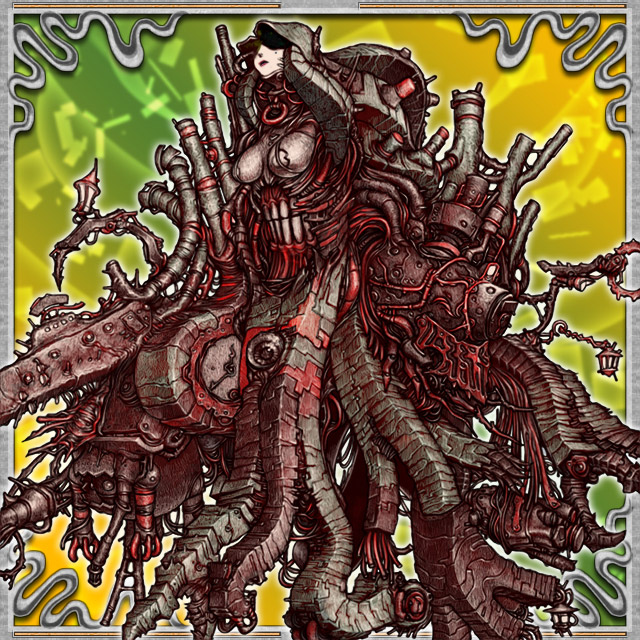 Wow, are we at ten of these already? The wiki entry for this monster says it's from Philip K. Dick's 1960 story Vulcan's Hammer, but that was just about a computer network taking over the world as a dictator, and this entity is named "RUNK" in Elder Sign, but there's no "RUNK" in Vulcan's Hammer. I don't really know what all is going on there, but this game's style blows my mind yet again.

This grisly tangle of rustic pipes, hoses and ducts almost evokes a huge biomechanical heart, but then you've got the junk forming a humanoid torso with prominent breasts, but THEN you've got the monstrous, lipless gums and teeth placed precisely where the breasts end up looking like maniacal eyes in a grotesque face! I also love how what appears to be a woman's head is just a pile of more junk with a strategically placed fragment of a mannequin or doll's lower face. It's all just so damn ominous, and the mildly fetishistic qualities only serve to make it more nightmarish. It even took me a while to notice that there's exactly one actual eyeball in the entire design, and it's situated below the mouth where a crotch would be if this were a humanoid being. Good lord!

This is a pretty solid one to end on for now. My Halloween season is three months long, so we might be doing the next part of this one in September and the final in October!