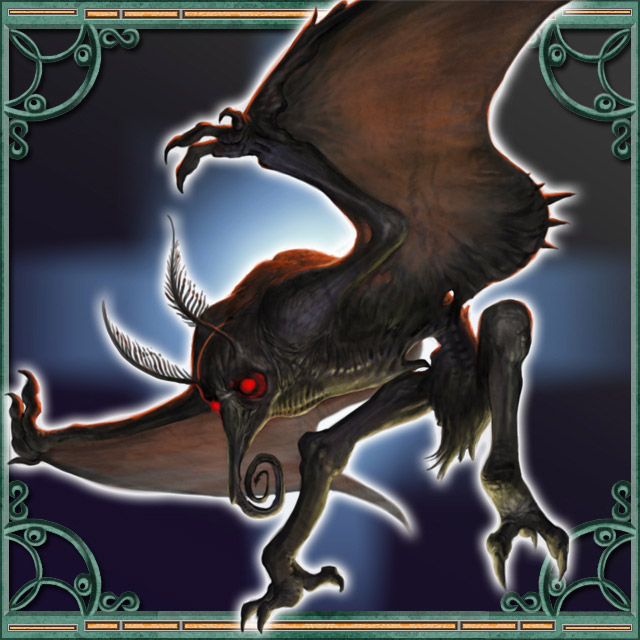 My favorite Mothmen are always going to be those closest to the original "eyewitness sketches," but I can still appreciate the more original elaborations on the concept, and this one is pretty unique in combining the arms and wings of basically a pterosaur with a face hybridizing vertebrate fleshiness with the exaggerated features of an actual moth. It's lot like a plucked bird head, I guess, but with glowing red eyes and feathery antennae and a "beak" that continues into a curled proboscis. The eyes could stand to be a lot larger, which I think is one of Mothman's most important characteristics, but it's still a very cool design, and despite how different it is from other takes on the being I feel as if everyone would recognize this as an interpretation of Mothman without having to be told. 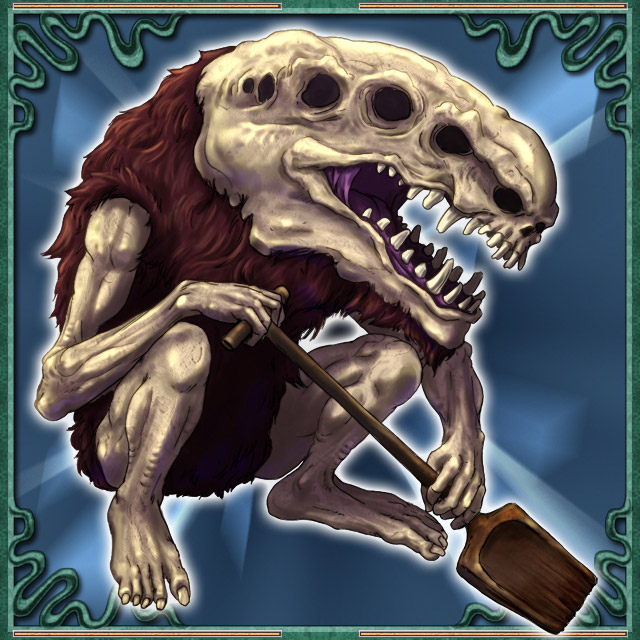 I guess Lovecraft either never saw a whole lot of quality artwork in his life, or he generally thought everything in every painting was real somewhere. In any case, it's kind of funny to imagine Pickman's paintings populated by this ludicrous monstrosity. The doglike aspects are there in the shape of its elongated head, but its head is SO HUGE, like Hippopotamus huge. The rows of eye sockets are very cool looking, almost like Crocomire from Super Metroid, and then just the tip of its muzzle resembles a human skull. Clever! 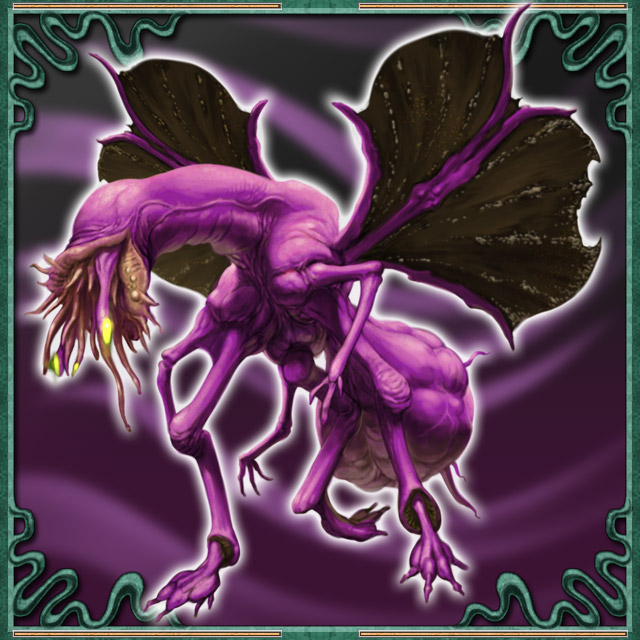 This one is completely distinct to Lovecraft stuff, and it's really supposed to be a "fungus" from Pluto, but was always described as looking like a "crustacean" with membranous wings and a cluster of ambiguous sensory appendages for a head. Interpretations of this description vary pretty wildly, but they usually take the "crustacean body" more literally by giving them a jointed exoskeleton. I like this squishier looking specimen a bit more, since it still evokes a buggy sort of shape with a meatiness you could believe from something more "fungoid." The wings are also much more alien than I usually see; they don't quite look like Earthly insect wings, batlike wings or fishlike fins, all of which I've seen on other Mi-Go.

I think its best feature, however, is how the various little tentacles of its cranial antennae are emerging from within a sheathe resembling a pair of lips, as if it has an eyeless head with a big mouth full of tongues. Most other Mi-Go just make the head a sort of puffball covered in tentacles, but this just makes more anatomical sense to me for whatever reason, and I appreciate how just two of the tentacles end in yellow lights that could be interpreted as eyes.

I'd go so far as to say this might be the coolest Mi-Go I've ever even seen! 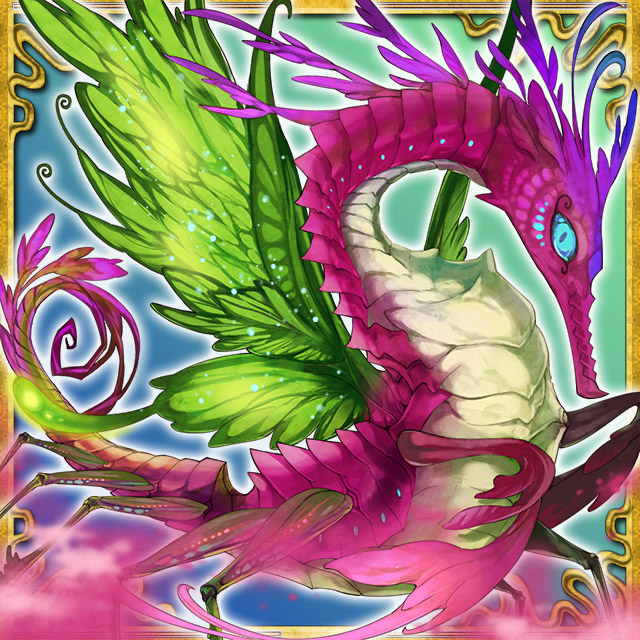 I'm not entirely sure if this one's referencing any one thing, but it combines a Lepidopteran with a seahorse in a really rad looking way! The pinks and purples are so intense, the green leafy wings effectively feel simultaneously like exaggerated fins, and the segmentation of the whole thing hits a flawless middle ground between the ridges of a seahorse and the armor plates of an arthropod. Interesting, too, that it has a total of ten legs, and they're accurately the legs of a butterfly, plus a pair of more mantis-like forelimbs that end in appendages like the fins of a leafy sea dragon. There's just a lot going on here, and all of it looks awesome. 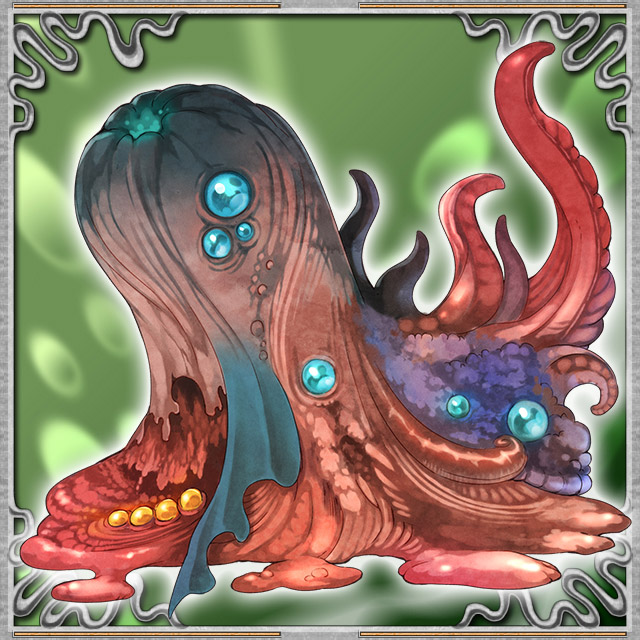 The Shoggoth is one of the most famous Lovecraftian whosits, originally said to resemble "conglutinations of bubbles" with dozens of greenish lights for eyes, capable of taking any shape and forming any appendage. Very little artwork ever really goes by this description, which just sounds to me like it would resemble frogspawn more than anything else, instead depicting them as menacing tumor-like mounds of flesh, tentacles and eyeballs.

It's difficult either way to make an amorphous monster really stand out, but this artist succeeds at a formless blob that doesn't quite resemble any other formless blob I'm familiar with. I like its pinkishness, I like the "fluffy" areas that really do look like foamy bubbles, I like the row of glowing yellow nodules that almost resemble "teeth" in a mouth-like pit and I like how the whole thing rises into a bulb ending in sort of a blowhole, or maybe like a sea cucumber's anus.

But this is just a little baby one, which brings us to... 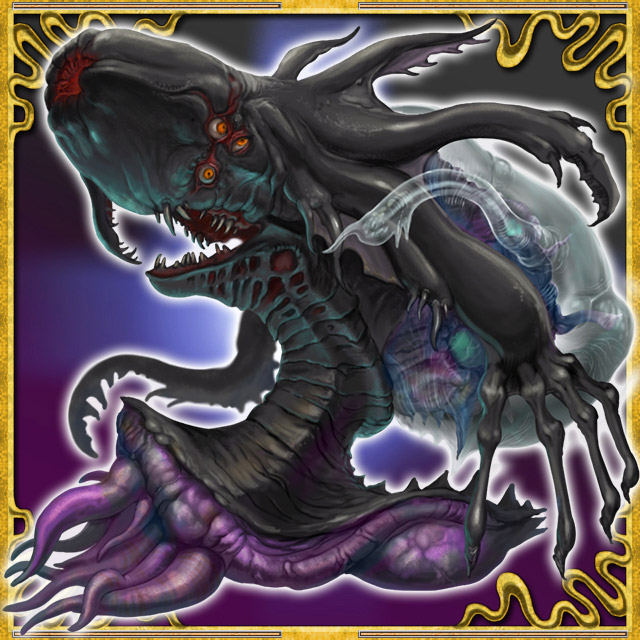 Wow, What?! This isn't even trying to look formless or amoeboid at all, but it still convinces me that its shape isn't fixed. It still has the "blowhole," but with more vertebrate-like eyeballs and a toothy maw whose placement gives the whole head end the look of a distorted, nightmarish sperm whale. This is surrounded by what's almost like a fleshy triceratops "frill" of different fins, flippers and tentacles, one of which continues into a giant, alien hand with bony fingers. It continues down into a tubular, wrinkled "torso" and finally ends on a pinkish purple, snail-like foot with a cluster of fat tentacles.

All of this is already completely unique design, so unique it's almost TOO GOOD to just be someone's take on a Shoggoth, and to top it all off, it also has a big, transparent sac on its back filled with some sort of vague, multicolored entrails. The sac even has its own transparent, gelatinous tentacle or feeler and almost looks like a completely different creature hanging off this monster. There's no explanation for what the heck that is, and I am very pleased whenever I can say that about a monster design. I want to say this is the best Shoggoth I've ever seen, but, it feels more like a wholly original creation that just got called a Shoggoth. 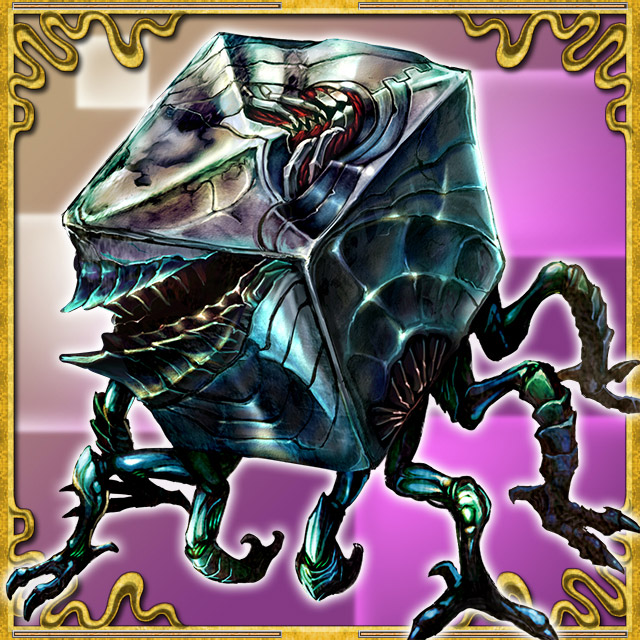 These beings were mentioned briefly in Ramsey Campbell's The Insects from Shaggai, as metallic "cuboids" who live on what we call the planet Uranus. Despite worshipping Nyarlathotep, "The Crawling Chaos," they were non-hostile, or at least that's what we're told. In part one I discussed how the Insects from Shaggai, or Shan, were spooked out of their last planet by a big flower in a hole. Apparently it was Uranus that they fled to, and lived alongside these box guys as refugees for a while, until the boxes were grossed out by bug religion and made them leave. Doesn't sound that peaceful to me.

The L'gy'hyxian here is a beautiful design though. Each face of the cube has a gorgeous and unique seashell-like pattern, with a fleshy, crabbish mouth on top and a more beak-like maw on the front face, neither of them arranged symmetrically in relation to the rest of the creature, which ends up looking pretty unnatural when you cram all these organic textures inton a perfect cube. The insect-like legs with chicken-like feet are cool, too, though I feel like it should have had them scattered around its body more, instead of just being a box with all the legs exactly underneath it. 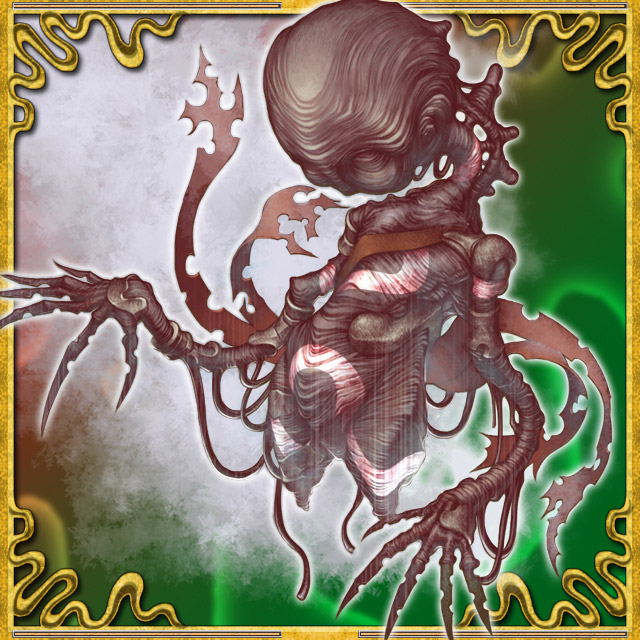 This is another Clark Ashton Smith creation, known as "The Treader of Dust." It's an interesting case of a "great old one" in this setting that's actually small when it manifests a form, described like a child-size, shriveled mummy with an embryonic body and huge, faceless head. It's a being associated with aging and decay, and any organic matter it touches crumbles instantly into, well, dust.

The details of this illustration are incredibly beautiful. The big, round head isn't totally faceless, but has shallow depressions and a single ridge evocative of eyes and a nose, the spinal column sort of "outside" the tubular neck looks very nice, there seems to be some sort of stony object embedded through its humanlike torso, the arms are long and noodly, the fingers like knives, and the legs are stumpy not as though vestigial, but as though they were cut off at the knee and cinched shut. The extremely fine wrinkles throughout its surface give it a haunting sort of "zen garden" elegance, and I also like the paler stripes painted onto it. Together with the ragged leather tassles, it really feels like something carefully decorated and preserved by some long-forgotten civilization. 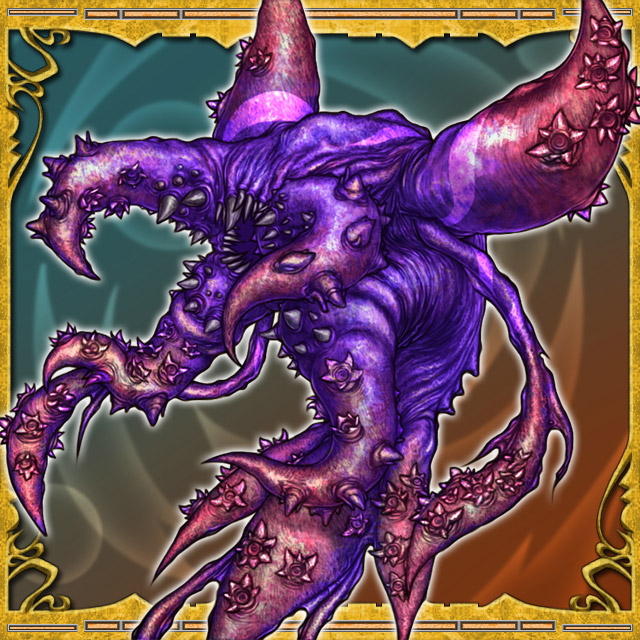 And now for something more universal and mythological than all those Mythos goonies! It's a Kraken! But, as is getting fairly typical for this game, it's not like any other Kraken I think I've ever seen. Four extremely fat, horn-like tentacles surround a circular mouth, flanked by a pair of more traditionally squidlike "whips" and then a pair of EVEN FATTER tentacles, even more like big bulbous horns. The rest of it tapers into a three-pronged fin, and then there's two more little tentacles trailing off of that.

The really wild thing here is that it looks absolutely nothing like a squid at first glance, but once you get a bead on that anatomy, and I hope my description helped already, you realize this thing IS exactly shaped like a cephalopod, just original enough to somehow disguise it. I suppose this initial ambiguity is partially due to the lack of traditional cephalopod suction-cup rows. Instead, each tentacle is peppered randomly with big, barnacle-like nodules that open up into fang-rimmed suckers. The fact that these are also dotting its "tail fin" is what also kind of throws me off from the squidliness.

Dang, actually...is this the coolest Kraken I've ever seen? It sure is up there. So much of this game's art is "up there." 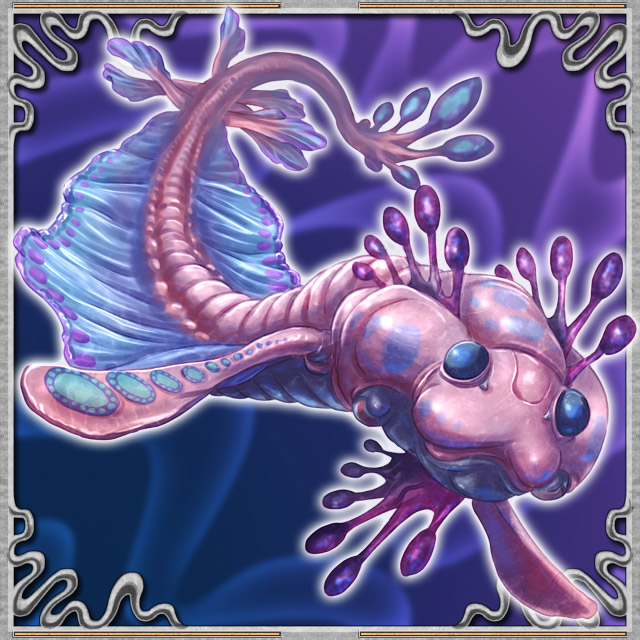 AwwwwWWWWWWWW!!!!!! LOOK AT THIS SKYFISH!!! Also known as Flying Rods, these things were really nothing but insects or birds blurring on older camera technology, but were interpreted by some as mysterious flying organisms too fast for humans to have ever captured.

This "skyfish" has quite a bit more going on than most I've seen. Its body is still mostly a thin, pale "rod" lined with membranous, rippling fins, but it also has this awesome looking head on it that kind of resembles that of a cute tardigrade or a Cambrian animal like opabinia. I also like the rows of knob-tipped, pinkish rays behind each eye, almost like external gills, with a third sprouting under its mouth. 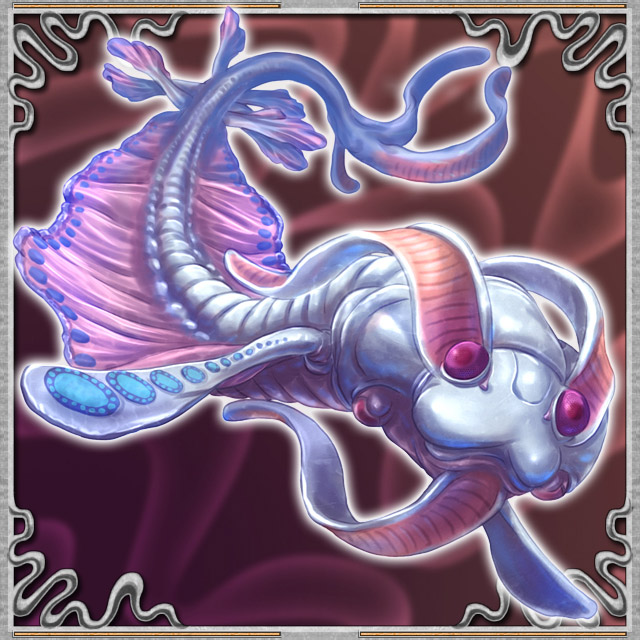 The skyfish also has some variants on it, and the most interested is this one that swaps the "gills" for flat, fleshy ribbons; one trailing behind each eyeball, almost like a long, stretched-out eyelid, and another hanging from the mouth area like a trunk or a proboscis! This is SUCH a unique look! I kind of want to think those "ribbons" are sticky feeding appendages to gather some sort of aerial plankton, but perhaps I'm just stating the obvious.