So, choosing Ultraman kaiju for the October review series caused some memories to resurface. A few years back I shared with you one of the creative exercises I used to toy with in text files, but that was only one of dozens, and while the vast majority are lost forever, there was one still hiding out in the depths of harddrive folders from as far back as at least 2005; a list of original kaiju I thought would make a cool webcomic or even a flash cartoon at the time.

Having dusted them off, I've decided to "finish" some of their concepts and give them some little speed drawings, which certainly aren't "final," but it's not even a concept I'm sure I'll ever do anything with, so they're as close to final as I guess they'll ever be! I believe I also intended it to have a pure horror angle that I don't often see in Kaiju stuff, but to be honest, reviewing all those Ultraman examples made these ideas feel relatively tame in comparison. You be the judge! 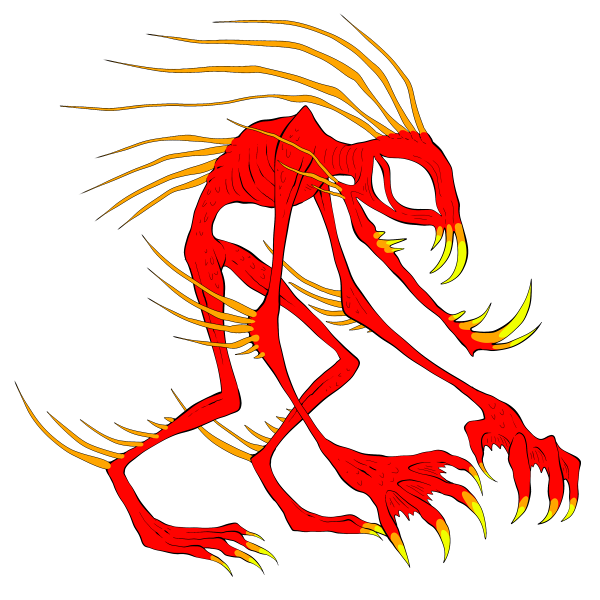 My notes denoted this as a "secondary antivillain" kind of monster. Living in the boiling sulfur of a volcanic island, she's worshipped by a weird human cult that grew out of a fishing town, and now experiments with her DNA to create human-monster hybrids. I guess I was thinking of Dagon and the Deep Ones if they were water/fire pokemon instead of the water/dark pokemon they probably are.

Hellcarp has no active interest in harming humans, but doesn't actively care about their safety either. All she cares about is defeating other monsters by any means necessary. Her main abilities are searing hot sulphur-breath and the fact that her blood bursts into flame on contact with air. If need be, she'll slice herself up with her claws to become one big inferno. She's also hell-bent on defeating one specific monster (the last one we'll be seeing here) and has yet to ever be successful.

Hellcarp is also a "greater" kaiju in this setting, meaning that she's not only unique, but if she dies...she respawns along with all other dead kaiju on exactly the same ten-year cycle. Nobody knows why this happens, and I didn't leave any notes of my own explaining it. I think I just hate the idea of any cool, unique monsters being permanently killable. 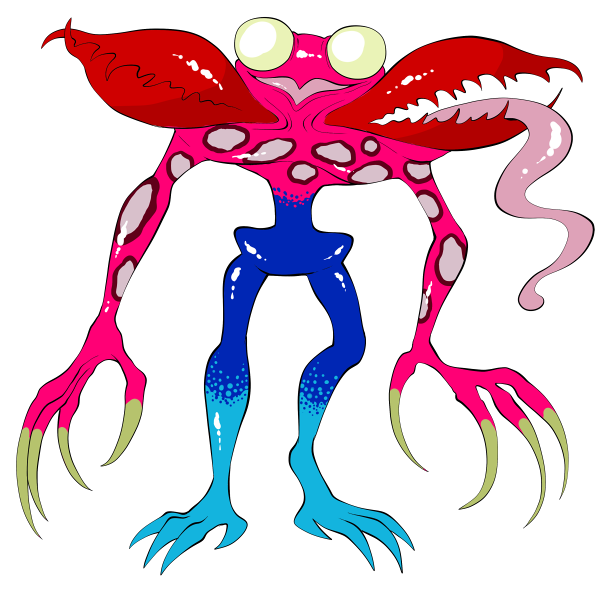 "Kwaak" is what Germany thinks of as the sound a frog makes! And I guess I was thinking of how many Japanese kaiju arbitrarily have "King" in their name, which I'm pretty sure they get from "King Kong?" I'd put down that this dart frog kaiju is so toxic, a person would die instantly just touching his slimy footprints if they haven't dried up yet. The bigger issue however is that merely breathing within miles of this monster can cause invariably horrifying hallucinations, and those closer to it fall into a full blown coma plagued by non-stop nightmares. This is an aspect I seemingly took from the idea of "licking toads," but it's interesting that many years later I'd start up the Nightmare Menagerie, and for its first run, there was such an unusual number of frog-related submissions that they sort of became "mascot animals" for the feature.

Fortunately for humans, this monster's sole interest is in hunting and devouring arthropod-based Kaiju. Less fortunately, arthropods are this setting's "lesser" kaiju, which emerge wherever a greater kaiju's corpse has fallen. Kwaak is motivated to kill other kaiju for precisely this reason, and will even seek to do so near large concentrations of humans so that the flood of giant flies, ants and beetles have a food source of their own. 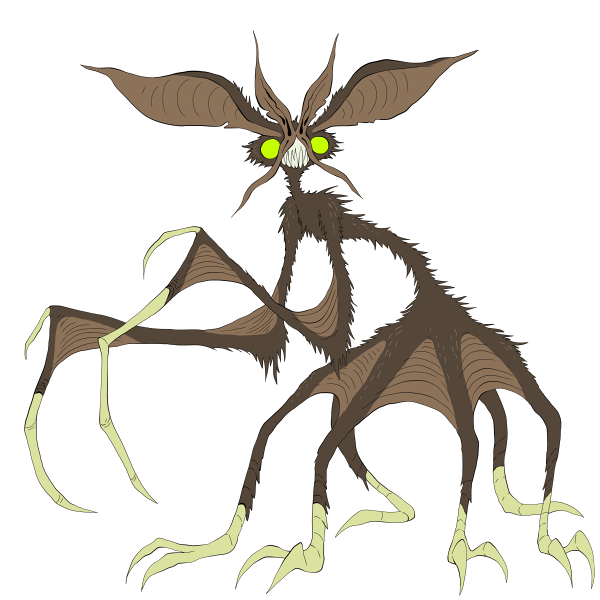 This one's description sounded clearly inspired by the bat rat spider from Angry Red Planet, except this is more of a bat spider mantis - a concept I accidentally repeated at one point near the end of my ghost novel! So it's obviously equipped with natural sonar, paralyzing venom, nearly unbreakable webbing, adhesive digits and powerful, snapping limbs, and I felt it should also have invisibility and telepathy.

Its primary diet is blood or even hemolymph drained from other monsters it manages to incapacitate or catch asleep, but it will also tide itself over by eating smaller snacks, and like a vampire, it can dominate the minds of sleeping humans or animals to draw them into its webs. This is much easier for it to do if those humans are knocked out by Kwaak's poison, but Kwaak also really wants to eat Vermire. 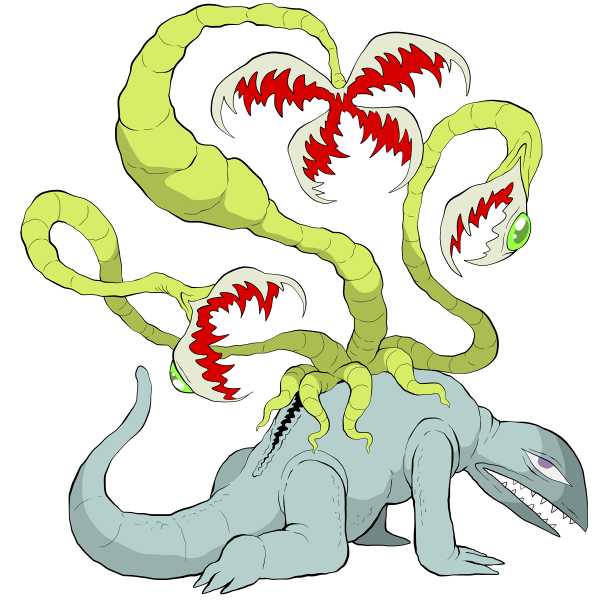 This gloomy looking reptile is itself nonviolent, sluggish, and unable to stand upright, but millions of microscopic worms emerge from its skin if it comes into contact with water, and these are "survival horror" style parasitic worms that can mutate hosts into small-scale horrors. If attacked by another kaiju, the mother worm emerges from Necataur and takes control, able to squirt a deadly acid from her many regenerating tentacles and heads or infest other kaiju with her bite.

I made a note in the original outlines that the orifice she emerges from resembles the zipper on a kaiju costume. 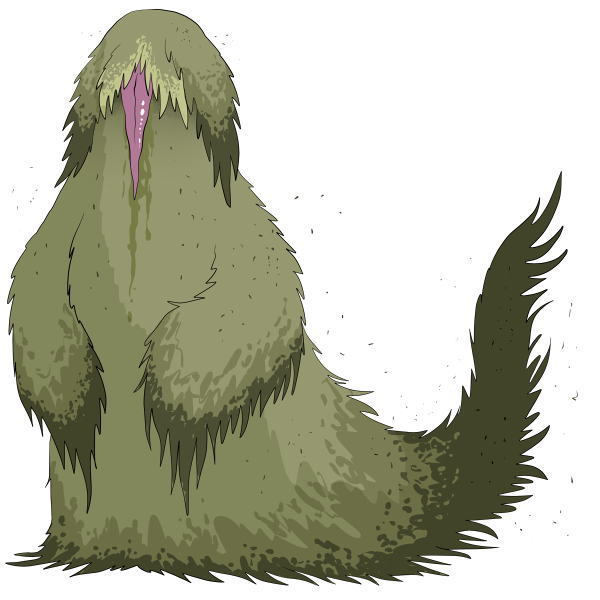 Humans have a love-hate relationship with this big, goofy dog kaiju, because it still has the personality of a big, goofy dog that mostly wants to eat, sleep and play, but even regular-sized dogs can wreak havoc as it is, and worse, Gus is an "undead" kaiju who leaves pestilence wherever he goes, including vicious fleas, ticks, lice and mange mites larger than some regular dogs.

The standard human protocol for dealing with this kaiju is to trick him into an enormous, sterilizing chemical vat. It takes care of his mutated vermin and bacteria for a while without harming him, but the one thing that can drive Gus to an actual rampage is finding out he's getting a bath.

Gus's blood is deadly to Vermire, and Vermire's respawns never remember this. 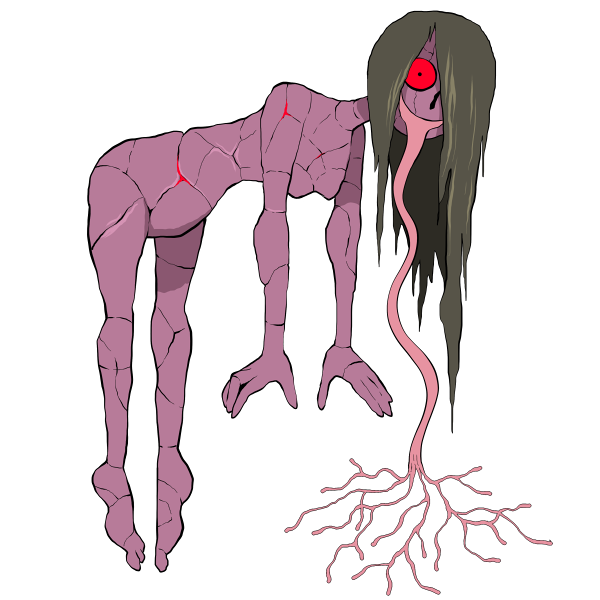 I remember everything that inspired this kaiju's concept; the giant blue people and horrifying "anteater" scene from the film Fantastic planet, a cracked and sun-baked barbie doll I saw on a beach once, the feeding appendages of proboscis worms and none other than the "flying purple people-eater."

Melodra is a gravity-defying, radioactive giant who spends most of her existence drifting in the ozone layer, stiff as a corpse as she sleeps with her eye open and watches us go about our lives miles below. Humans are the one and only thing she's capable of eating, and whenever she gets hungry, she descends down to our level to collect as much food as she can with an adhesive tongue similar to the proboscis of some ribbon worms. Just like an anteater, she will often attempt to tear open buildings and send the tongue inside, its countless branches worming their way into every room and stairwell. The only warning people get of her arrival is her angelic wailing and an acidic smell.

I also came up with this monster well before I knew how prevalent it was for people on the internet to actively fantasize about being eaten whole by giant women, but I stand by this one. Personally I just think it's terrifying, and it doesn't matter anyway because I know some of you also want the big dinosaur kind of kaiju to step on you.

Anyway, Melodra's singing also pacifies Gus when he's upset, and she kind of treats him like he's actually her dog. 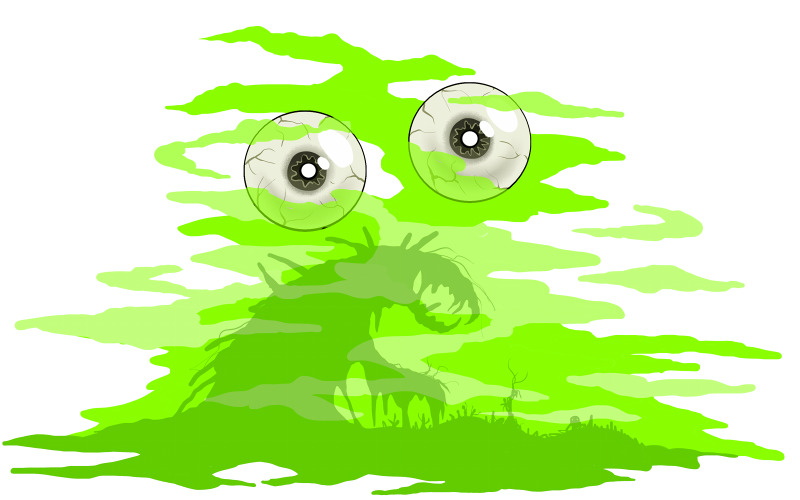 One night, a remote town reported a blindingly thick, green fog and the appearance of "two moons" in the sky. By morning, there was no one left alive, or at least no one left human.

This monster has no "body," but manifests as a luminous fog bank many miles wide and a pair of huge, levitating eyeballs. Anything exposed to the fog for long begins to build up a green, mossy slime that can regenerate and animate dead tissue. Even fallen kaiju can get back up as its slimy puppets, and it can meld its ghouls together into weird new shapes.

Lunagaze's fog destroys Necataur's worms outright, and will return their hosts not just back to normal but, sometimes, cured of all prior disease. 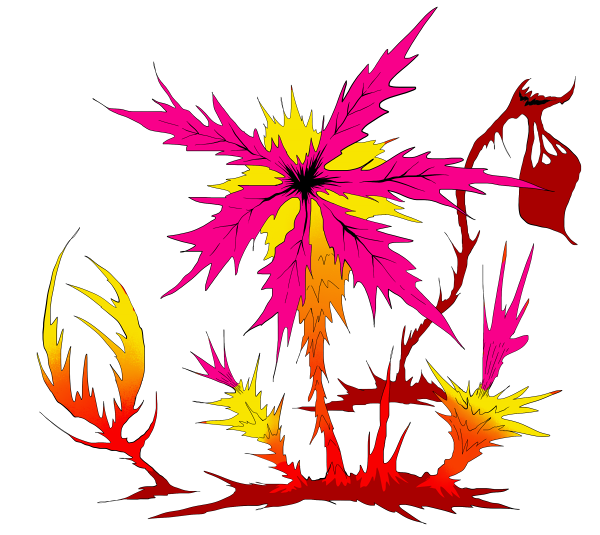 This "kaiju" is an entire network of monstrous vegetation that grows deep beneath the ground most of the year, and as its name implies, only sprouts to the surface in the fall. Its early shoots are already carnivores, and eating enough meat allows them to mature into more kaiju-scale plants that include solar-powered, beam-throwing defensive blossoms and a variety of huge traps tailored to lure lesser arthropod kaiju. These can in turn further "blossom" into flowers adapted to lure in and kill greater kaiju, with one specialized for each individual monster. 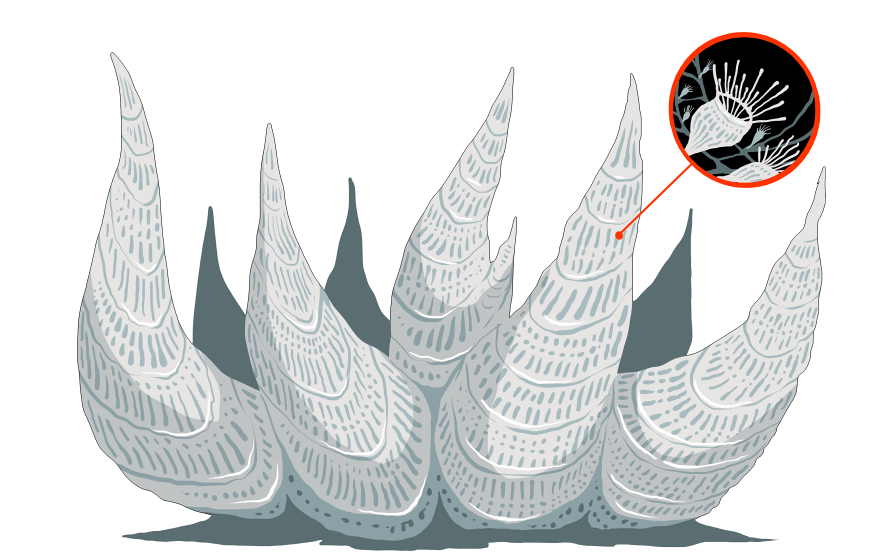 The largest, deadliest and most feared of all kaiju is a telekinetic glass sponge the size of a small city, resting at the bottom of the ocean for centuries between feedings. When it rises, each of its huge horns emits a telekinetic funnel that loops completely around the planet Earth and back again, creating a network of invisible anti-gravity currents that suck up everything in their path, bringing it all back to the sponge's huge digestive cells to be dissolved and absorbed. Those few humans who have ever escaped say that the monster spoke to them telepathically, in the voices of millions of living things now one with its mind.

Somewhere deep within the entity is a soft and vulnerable core. 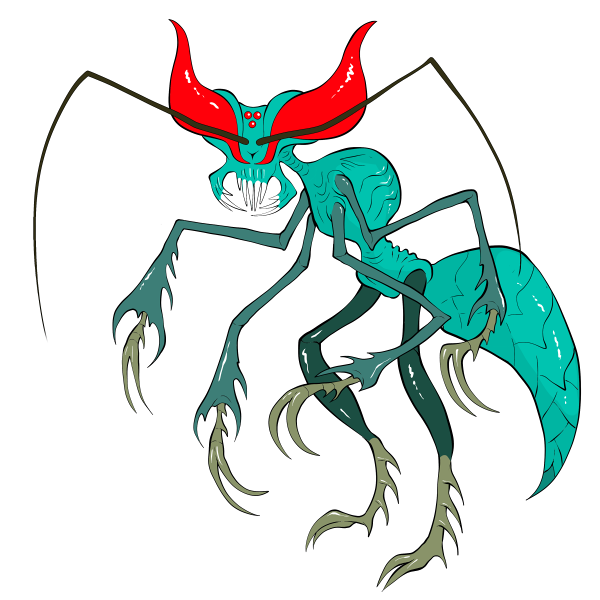 Finally, we have what a younger me designated as the "main good guy" kaiju of this setting, named for "Tarantula Hawk" wasps and the use of "Zilla" for countless generic, knockoff kaiju in real world media. Originally a human agricultural scientist, she was studying the use of parasitoid wasps for eco-friendly pest control when her family was killed by an unidentified monster. She was never seen again, but a new monster soon tore its way out of her basement laboratory, and has since devoted its existence to assassinating every other monster that threatens humankind.

Zillahawk stands only a third the height of any other kaiju, but she is extremely fast, cunning, and only needs to land a single sting in the right spot to pacify a kaiju while implanting her eggs. She then "dies" as she retracts her stinger, but always reawakens from one of her own eggs, the rest of which develop into jet-sized flying drones. Furthermore, her powers and even personality vary somewhat with each possible host:

Hellcarp: Zillahawk and her drones become impervious to heat and able to ignite with flame, but also become more rash.
Gus: emerges in an "undead" form unaffected by any poisoning, and able to command Gus's insects.
Kwaak: becomes capable of breathing underwater and gains a deadly poisonous spit, but craves other insectoids.
Vermire: she fears this opponent, but she acquires silk glands and a blood-draining proboscis.
Necataur: she emerges in a mutual symbiosis with Necataur's worms, which can take control of other kaiju for her.
Melodra: only makes her ravenously hungry for human flesh. She avoids using this one as a host at all costs.
Lunagaze's eyeball: her larval form can control the body of her next host.
Evil Autumn: unfortunately, she not only cannot parasitize this kaiju, but she is its ideal pollinator.
Diamondusk's core: ??????????

With the unexplainable respawning of all kaiju, Zillahawk's self-imposed duty is unending, but at least it also means that Earth always has a defender?