Back in 2018's Halloween season, I meticulously reviewed almost every single monster from the entire Resident Evil franchise, but never got around to reviewing designs from the Resident Evil 2 remake that would debut the following year. In part, that's because the number of monsters actually went down, and of the surviving creatures, one redesign was a pretty big disappointment...however, with two remake games out now, I've no excuse to put this off any longer. 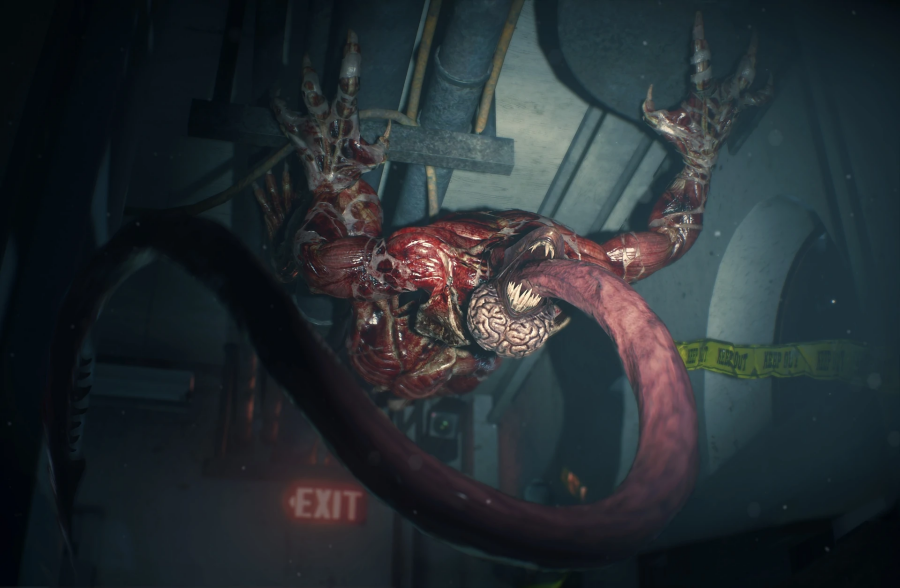 First up are the Resident Evil II critters, and you can go ahead and revisit my original monster review for comparison. We won't retread creatures as simple as the dogs, roaches and alligators or anything that didn't change in any way, but we will include the Licker here. It looks great at this resolution, but I somewhat miss the huge, long talons in place of actual fingers, and I don't think it was necessary to actually put visible barbs on the end of the tongue. The way their tongue was capable of stabbing and slicing with no obviously sharp elements was always a lot creepier in my book, implying some sort of microscopically fine edge. 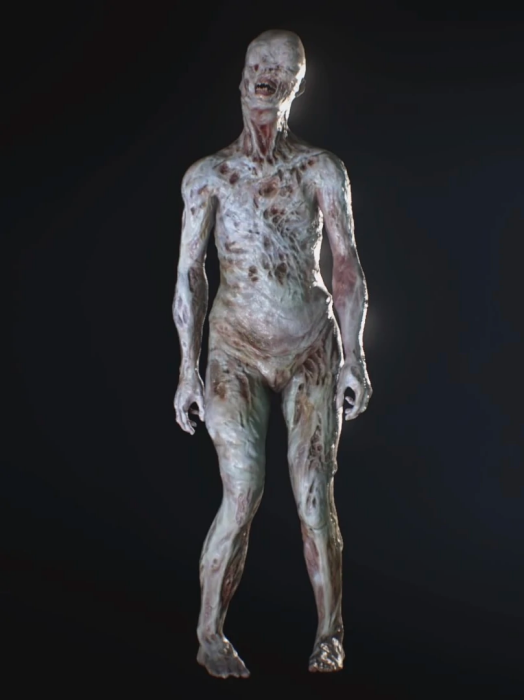 This is a brand new enemy to the lore of Resident Evil 2, an alternate zombie strain that's not only faster and stronger but can rapidly regenerate. It's definitely much more frightening looking than most zombies with its blind, bulbous face and pasty, fatty looking flesh. 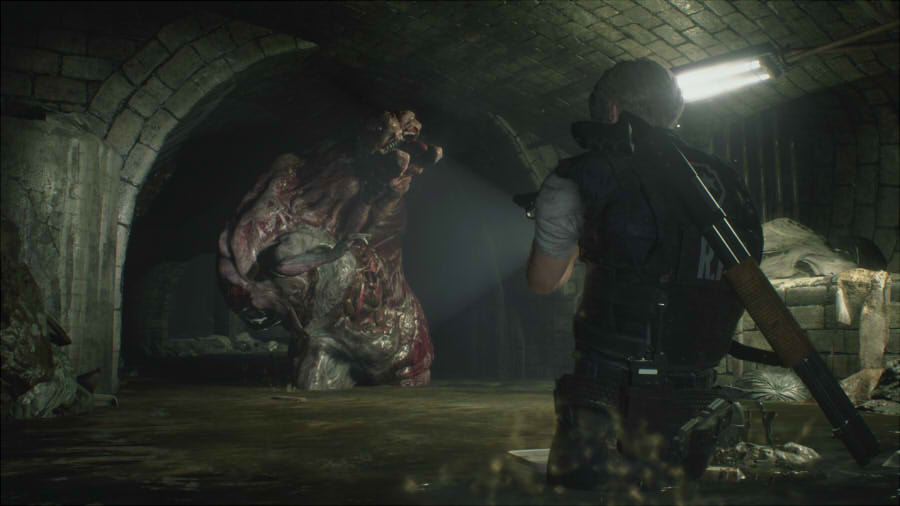 One of my favorites from the original game has been expanded a little; I always loved the pitiful, "rejected" G-mutant for its putrid, globster-like design and miserable expression, so it's all the more ghastly, all the more pitiful now that you encounter several of them lying around in the sewer like big heaps of meat until prey gets too close. I also like that their faces now split open, and there's actually a huge worm-like proboscis in there, but I'm not as big a fan of their now tiny, beady eyes. The sadder, more human eyes of the original design would really look even better on this version. 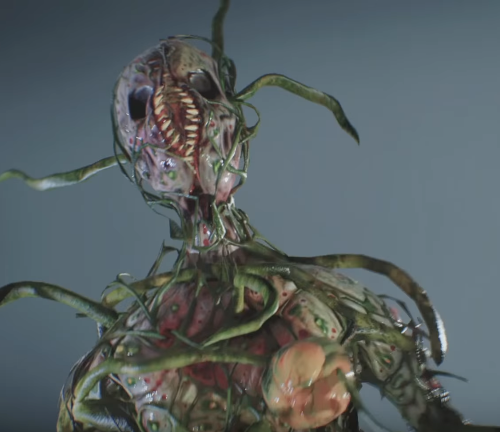 So...this is the big disappointment I was talking about. The classic Ivy is one of my top favorite designs in the franchise, and I would have thought it was considered one of the most iconic among other players as well. Let's look at it again: 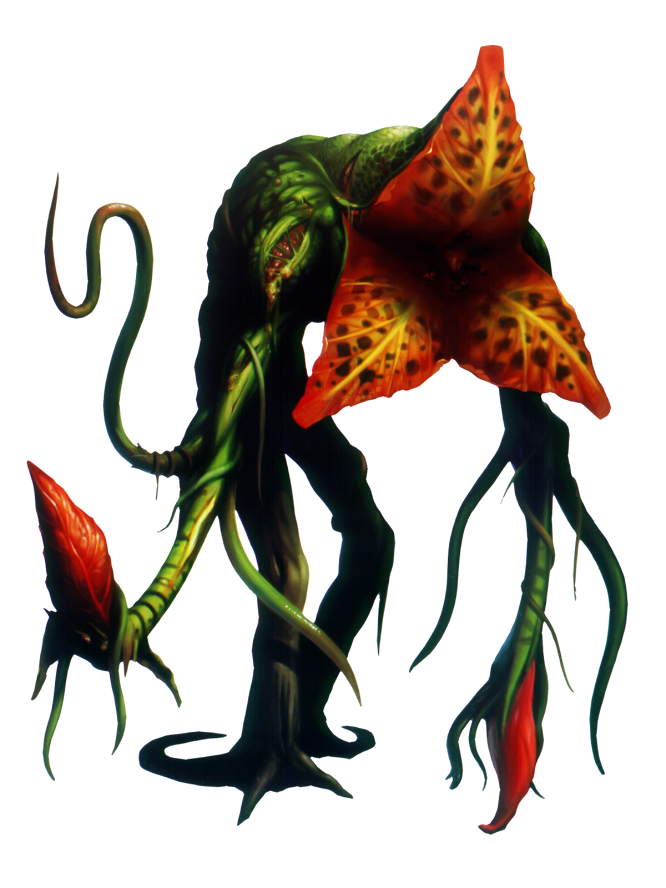 MAJESTIC. Absolutely nothing beats this hunched, plodding botanical abomination and nothing could make it more memorable than those three huge, colorful petals it possesses instead of any normal head or mouth. It's cool looking, totally unique in the series and even pretty damn disturbing for a plant creature, but the remake has decided to replace a fun and highly original design with a sort of weed-infested zombie-thing I've seen plenty of times before. The only thing I like here is the face, and that the head can split all the way open, but it is not an authentic Umbrella brand Ivy and I will accept no such trite, forgettable knockoff product for my B.O.W. shopping. 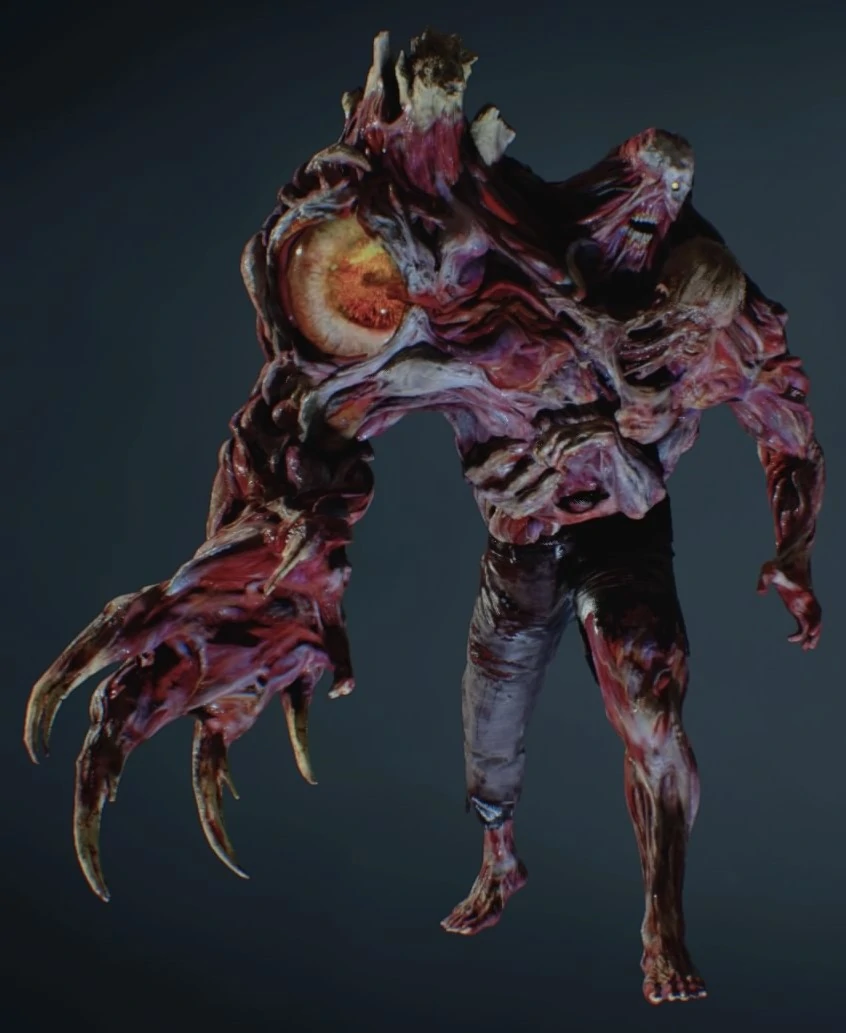 Birkin is kind of another mixed bag. His classic design is mostly intact here, and the huge eyeball is more striking than usual. I liked the slimy redness it once had, but its more life-like appearance here kind of drives homw that this guy's so screwed up, his shoulder wants to be his new face. 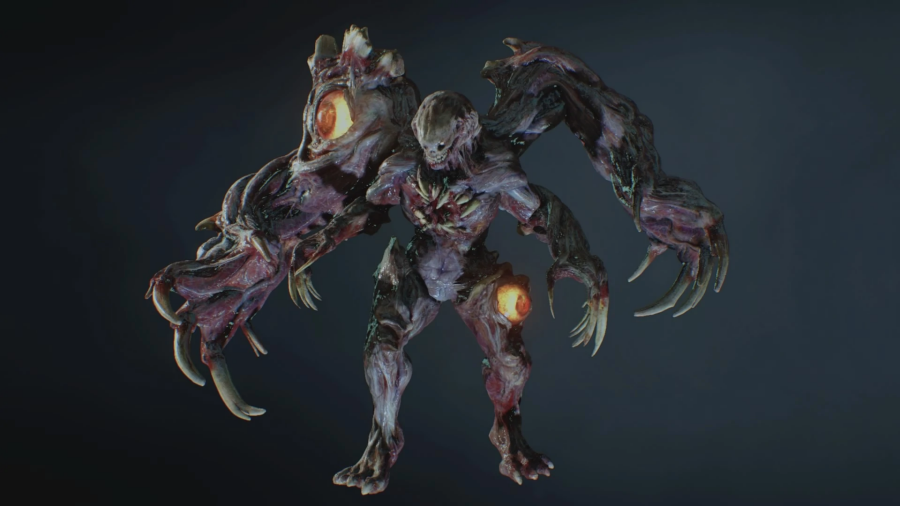 Birkin's next stage deviates a little more from its original look, and I'm not sure I'm really feeling it. He used to have a white, bony face with a maniacal sort of Joker-like grimace, and I really liked his original color palette as well. This shiny, slimy, uniform grey-purple is so muted and so plain. ...And the next form is just downright butchered. As its own design, I'd probably really like this thing; it's an interesting tangle of meat and bone just kind-of shaped like a humanoid, what's left of its face has more of that sorrowful, degenerate character I like so much, and I love all the wretched little eyeballs poking out of the chest cavity. Those are great! What's not as great, is that this replaced another truly unique design, different enough that it's another I need to contrast on the same page: 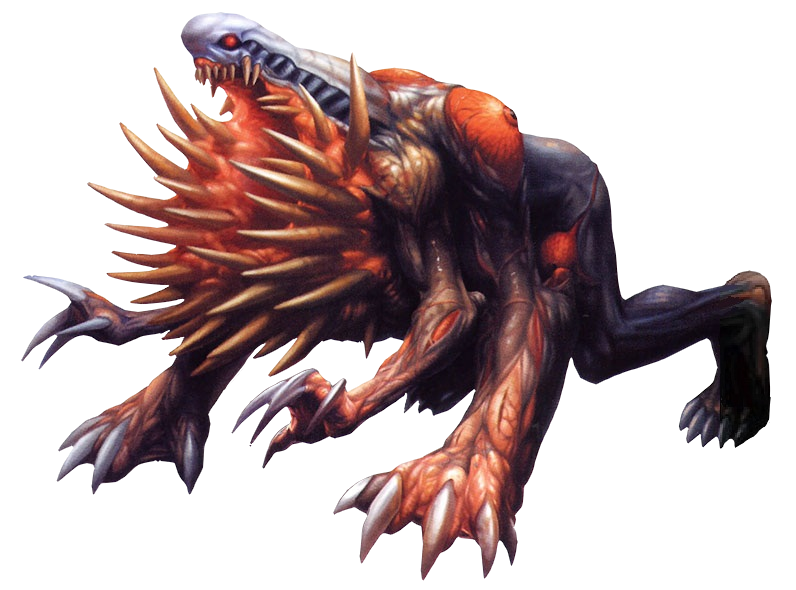 It's another I always thought was "iconic," a human body mutating into some entirely different, more quadrupedal predator in a way I've never quite seen before or since, all centered on an upper torso that's completely, totally exploded into pure teeth. So many teeth, they don't even fit into any normal mouth shape! Who could ever forget this freako?? It really gave the impression that Birkin was evolving into something deadlier and more efficient, while the remake simply has him degenerating more and more into a random mess. ...And I guess that's because a random mess was always where Birkin's mutation process landed, but still, I really liked his bigger, faster, stronger progression before his total collapse into a tumorous horror. It felt all the more tragic. I will say that this take on the final bloboid is actually a bit more frightening than it used to be, I really like the empty black holes that used to be eyes, and the maw beneath it hearkens back to what was lost from the previous stage, though that maw is still concealing the all-important eyeball! 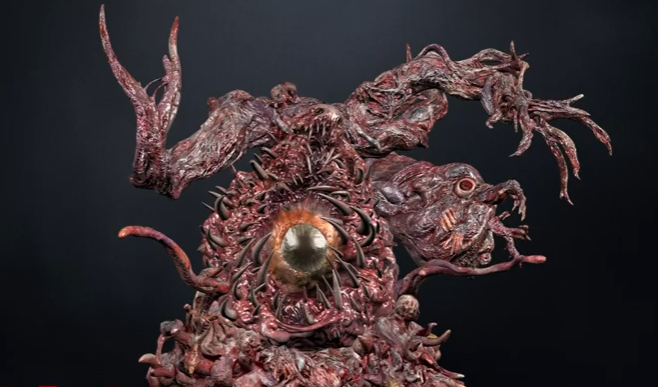 When he's not crammed into a subway car, final Birkin is actually looking pretty fantastic. The eyeball nicely breaks up the monotony of the surrounding flesh, the dozens of hooked teeth are marvelously nasty, and WHAT is even going on to our right? What is that big bulbous mass with hands and another eyeball stuck in it? An attempt at a new head? An attempt at a third arm? I overall like everything about this form, I just wish the build-up to it hadn't become so uniform and predictable of a transition from man to meatpile.

Sadly, this not only wraps it up for the remake's noteworthy designs, but at least a few of its monsters - notably the giant spiders and moth - are entirely absent, with the designers saying they found them too "unrealistic."

Unrealistic? In a game where a "virus" can transform people into skinless brain monsters? Come on. Resident Evil wasn't supposed to be a series about dingey, grey and brown realism. It was a series in which a pharmaceutical company brings B-movies to life for cash and hides them behind puzzles.