Photos by Somanytoys on ebay! 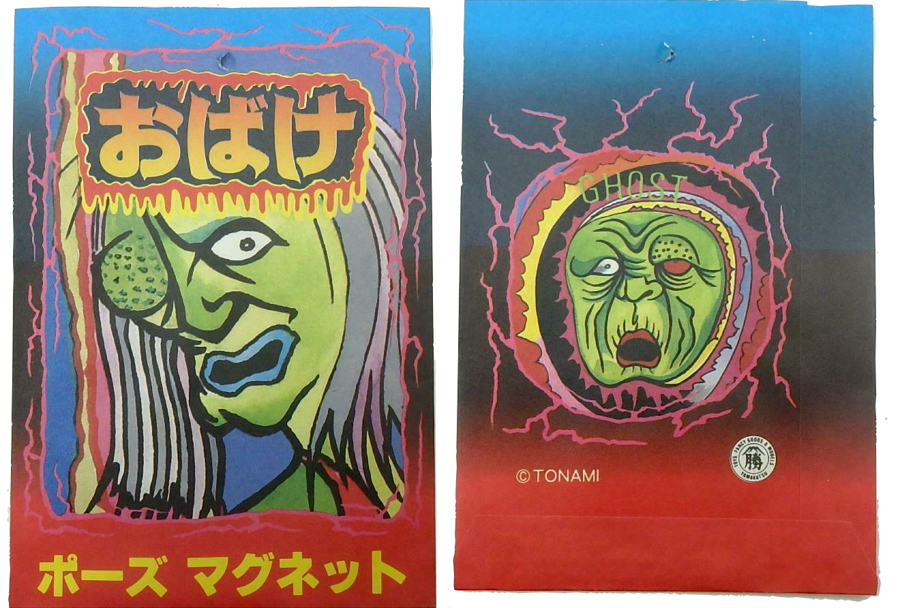 I always love having something to review that's so odd and so obscure, it's almost unsearchable. These beautiful little paper packets have just recently flooded ebay from only two or three different sellers, dating back to at least the sixties and marked with only two words: "GHOST" and "TONAMI."

So what does one find inside one of these packets? Oh man, what DON'T they?! Well okay, what you don't find is pretty much everything, if you want to be technical about it, but if you were a little Japanese child spending a hard earned five yen or whatever these were worth at the time, you WOULD become the proud owner of: 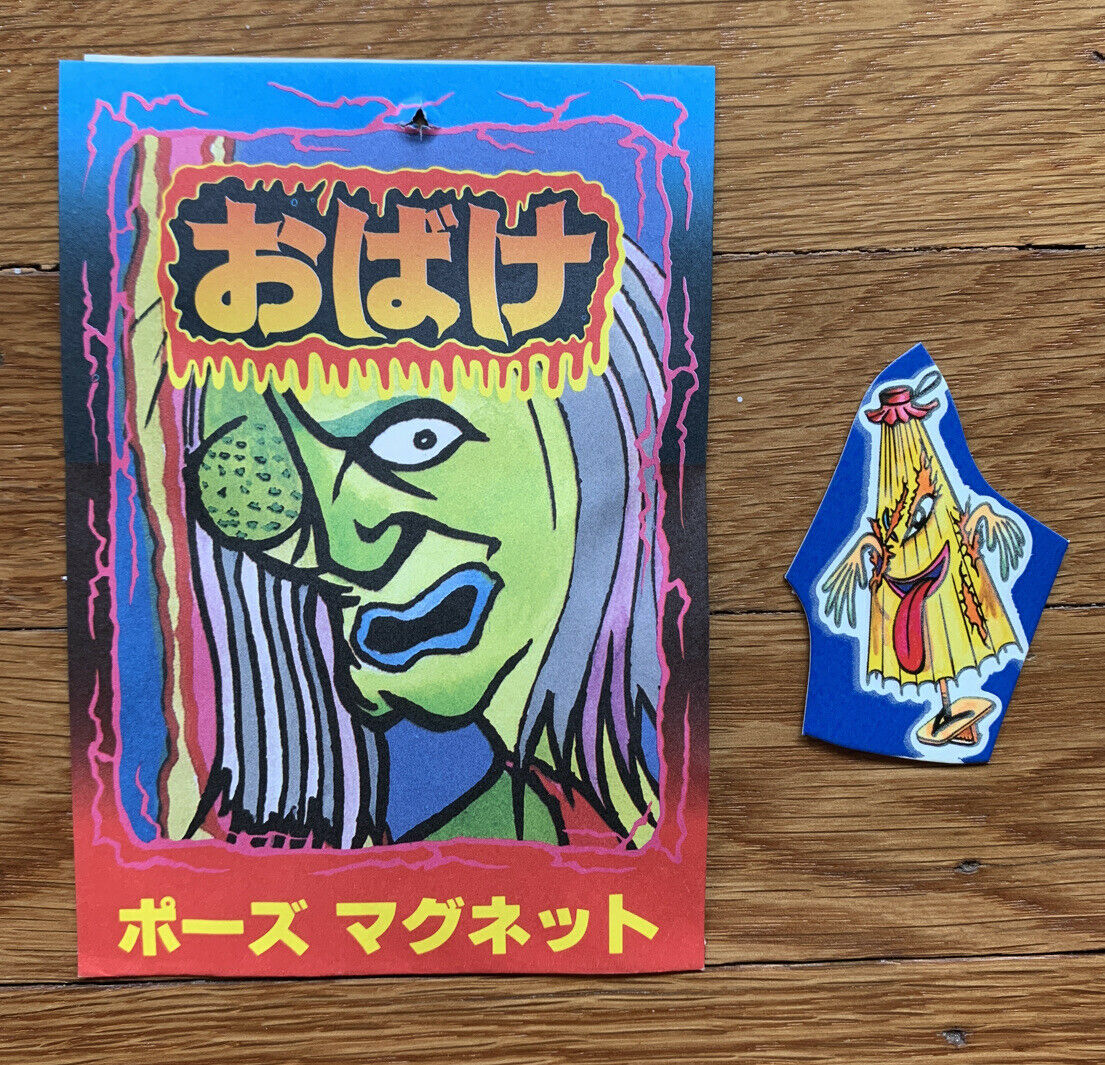 ...A single drawing of a spooky monster printed on around two inches of roughly cut magnetic vinyl! Yep, just the one, and "TONAMI" couldn't even be bothered to cut them out along the border of the actual artwork, resulting in what looks more like a half finished jigsaw puzzle piece.

The cheapness of these is a big part of their charm, however; there's something quaint and wholesome about something so, so crappy by our modern standards but sold in such earnest, in such unique packaging to boot. They did what they could with obviously limited resources, and more importantly, the actual artwork seems to be completely unique. We'll likely never know who was actually paid to paint these ghastly goblins, but we're going to give their work the spotlight it never properly received before...and I'm even going to finish the factory's job and cut out those damn backgrounds. 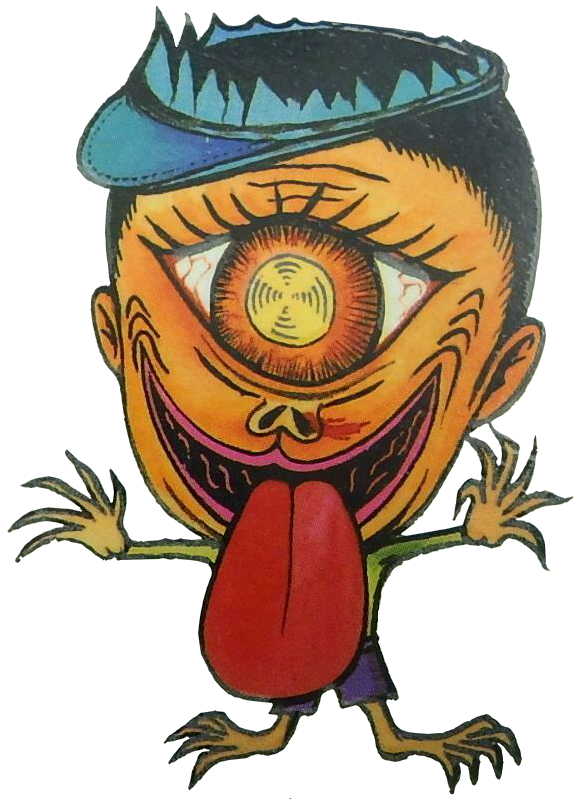 One of the most striking designs, enough that I chose it for this article's thumbnail, is a clawed child whose head is at least twice the size of the rest of his body, with a huge red tongue razzing from a black-toothed smile, reptilian nostrils and a huge eye with an intense yellow pupil. I also like the torn baseball hat, basically the visor only, still a bit too smal for him. A child with a single eye and, quite often, a protruding tongue is a recognized yokai, Hitotsume-kozo or "one eyed boy," though it has little known lore or behavior besides just kind of scaring people. 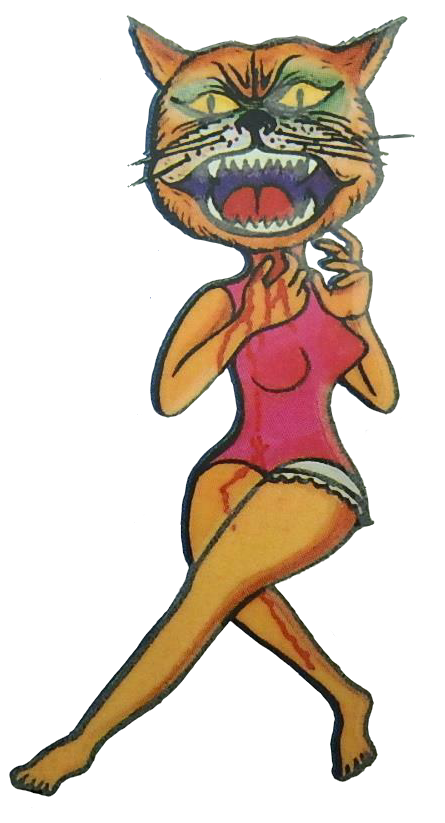 This is a "sexy lady" with a cat's head, but not what that combination usually entails. The cat head is realistic, vicious looking and slightly too large for her body, but more disturbing is the blood dripping down from its neck, even running down to her feet as she seems to clutch at the cat head. Is she trying to get it off?! 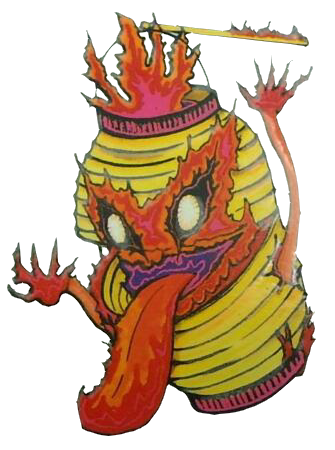 Another well known youkai, a paper lantern spirit! This is a fairly unique one, however, featuring flame-rimmed eyes, flames for "teeth," a flaming tongue and long, noodly flame arms with flame hands! 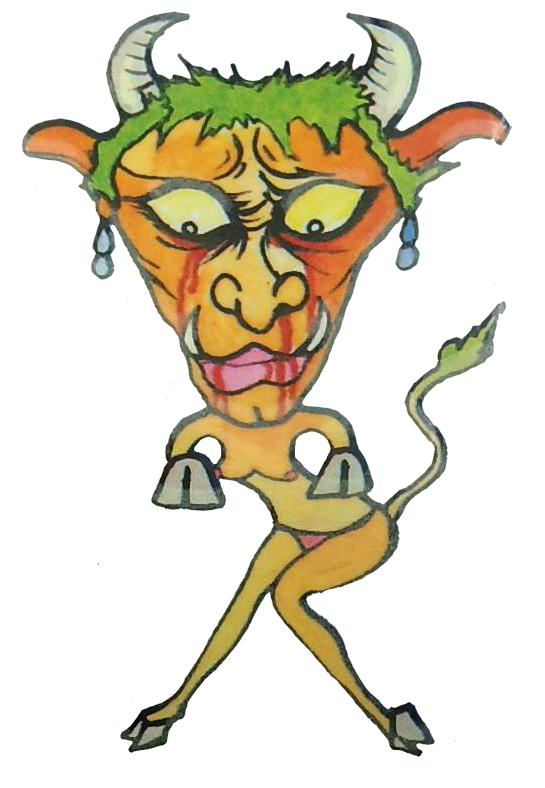 A weirdly proportioned, nude figure with hooves on her hands and feet and another hugely oversized head, this time with horns and tusks and witchy, green hair. She's also oozing blood from her eyes, nose and mouth, just because. Since not all of thes youkai have huge heads, I don't think it's just the way she's drawn; I think when one of these has a huge head, is really actually has a huge head.

This is another cyclops child, but I think it's also supposed to look like a knockoff of the famous Gegege no Kitaro! He only has one eye himself, even if his is in a normal place for an eye to be, whereas this one centers it. I mostly say it's a Kitaro imitation because of the hair, including the little "hair antenna" Kitaro uses to detect ghosts. It's also holding a snake, and in early stories, Kitaro had a pet snake he could sometimes use on his adventures, which somehow lives in his stomach. 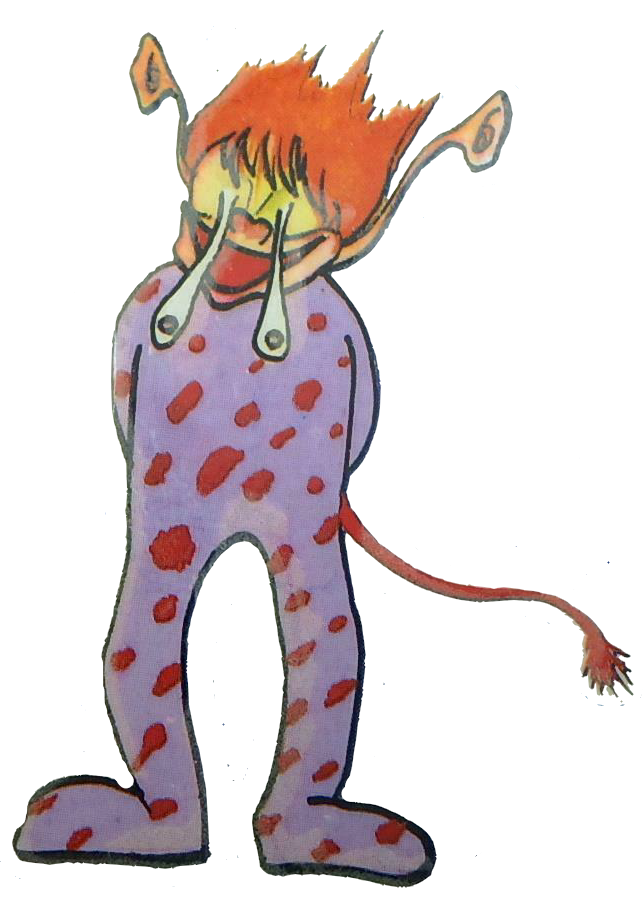 This goofy looking ghoul has eyeballs like a couple of long, dangling drips, or like a snail's tentacles if they went limp, but it also has its ears on the end of stalks and a lion-like tail. The rest of the body being like a plain, purple onesie with red polka dots is funny, I don't know if that's how this thing dresses or just what its body looks like. 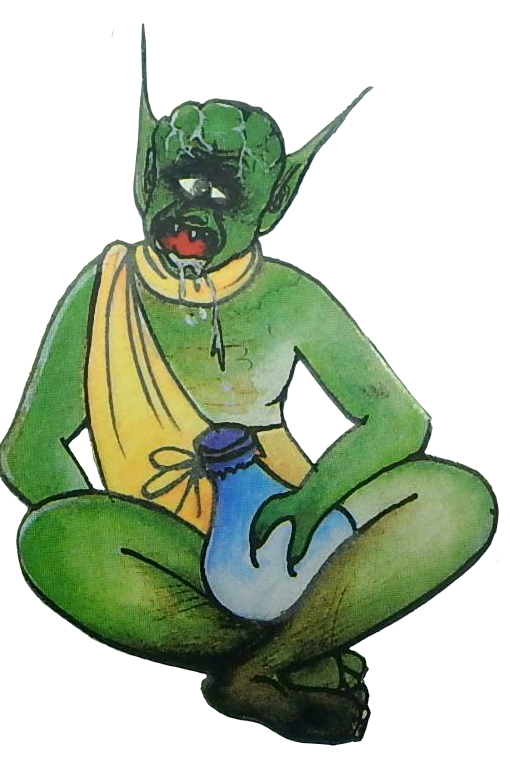 Awful lot of one-eyed people here. This one is green and a little more alien, with two-fingered hands, a veiny lumpy cranium and long, pointed ears. He's also sitting with a big jug of sake and he's drooling, so, probably pretty drunk. 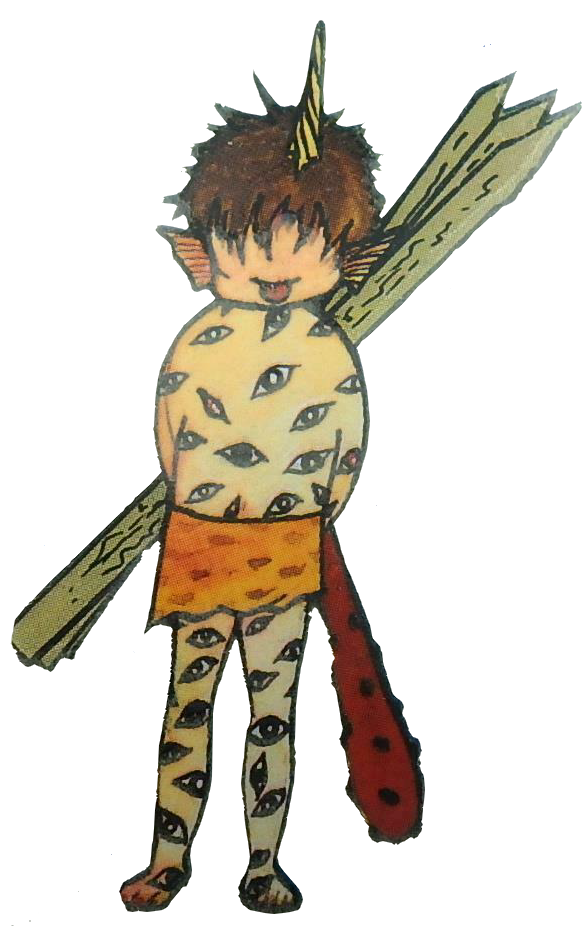 A humanoid with no eyes or nose in its face, but many eyes on its body, arms and legs. This is possibly meant to be one of the many yokai covered in eyes, but the single narwhal-like horn on top of the head, animal skin loincloth and club say "oni." The fin-like ears are also interesting. 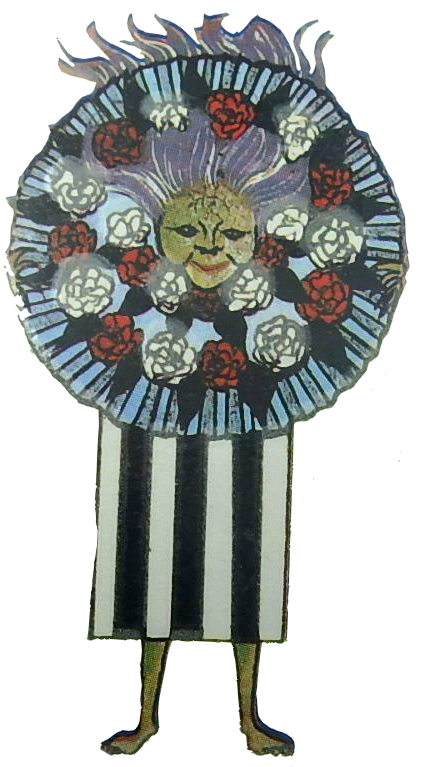 I don't know what this is exactly. An old woman holding a wreathe of flowers in front of her face. Is that a funerary item? 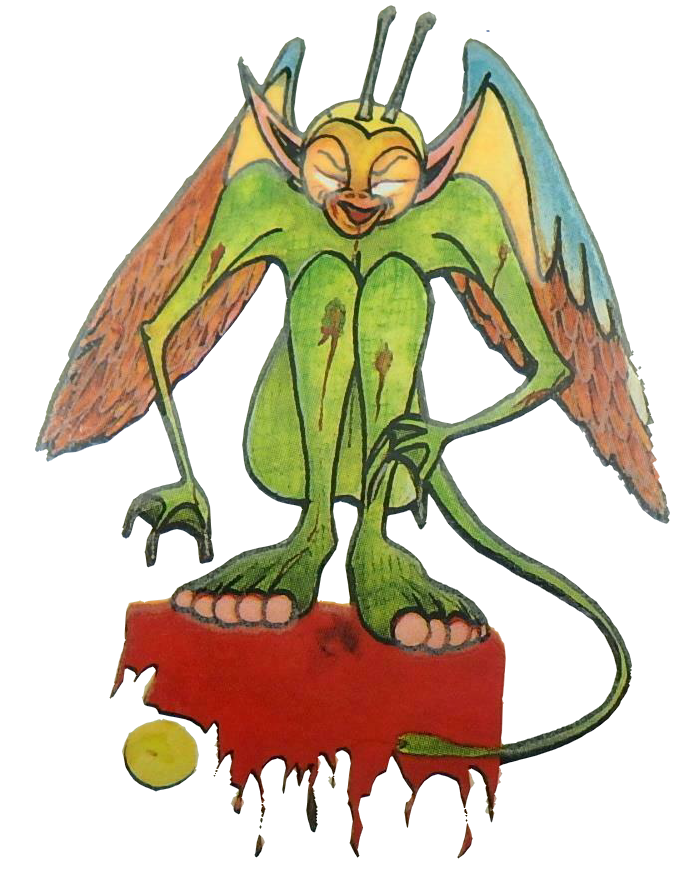 A lot of cool things about this bizarre gargoyle. A goblin or martian-like head with both pointed ears and long antennae, pure white and luminous looking eyes, a hairless green body with webbed hands and huge feet, and a pair of bird-like wings. It's also standing atop some dripping blood and I don't know what that yellow circle is supposed to be in the bottom left, like a little moon. 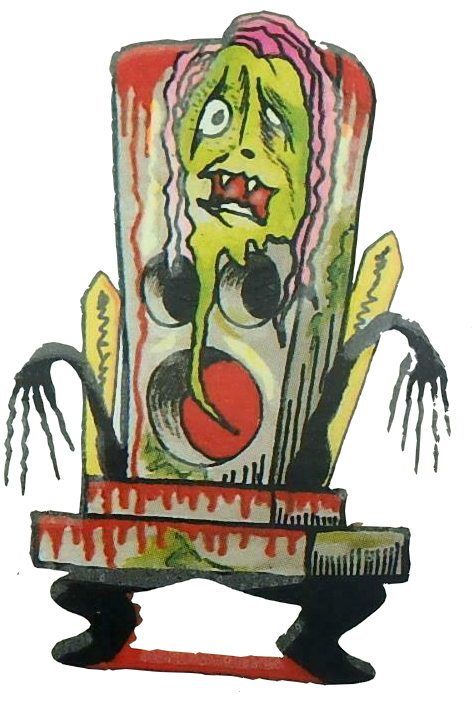 So this is a "Western style" gravestone, but the three holes in it look more like the face of a Haniwa, a more traditional Japanese grave marker. Then it has what looks like the face of a green ghoul that's been torn off and stuck onto the stone, slathering it all with blood, and the whole stone walks around on little shadowy black feet with matching shadowy hands that almost droop like a couple of wilting plants. Everything about this one is so cool and unique! 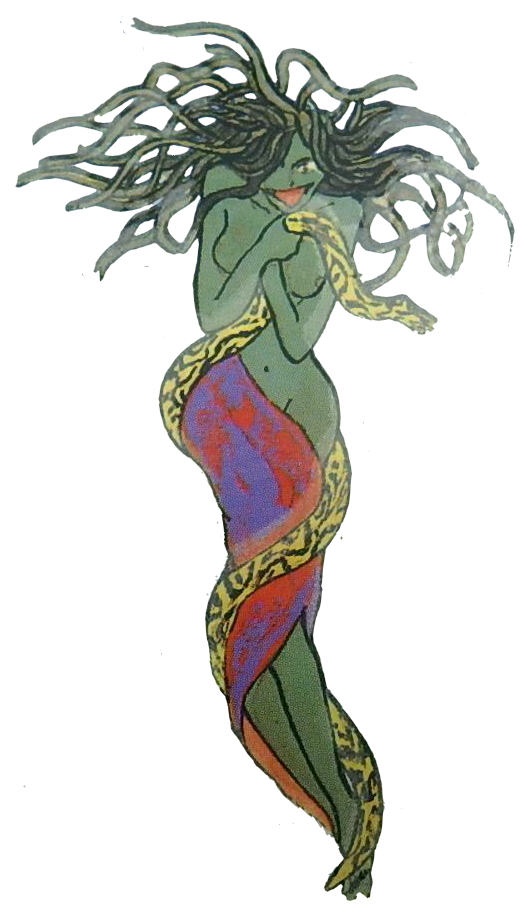 This is a more "80's anime" looking design than the others here. A curvy, mostly naked grey-green gorgon who seems to be floating, wrapped up in a big yellow python. Actually reminds me most of all of enemy art from Devil Summoner. 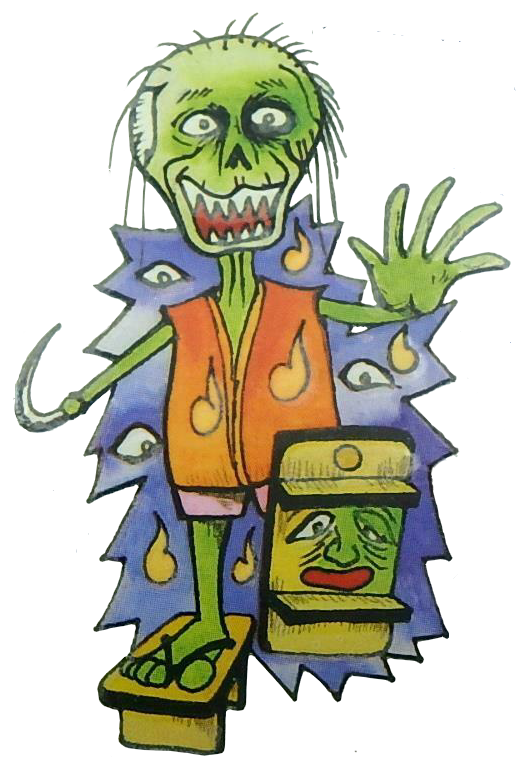 There's a lot going on with this green-skinned, saw-toothed zombie. His right hand is a metal hook, there are apparently faces on the undersides of his wooden sandals and behind him is just this big, jaged hole, or something, full of eyes and little ghost-flames in darkness. 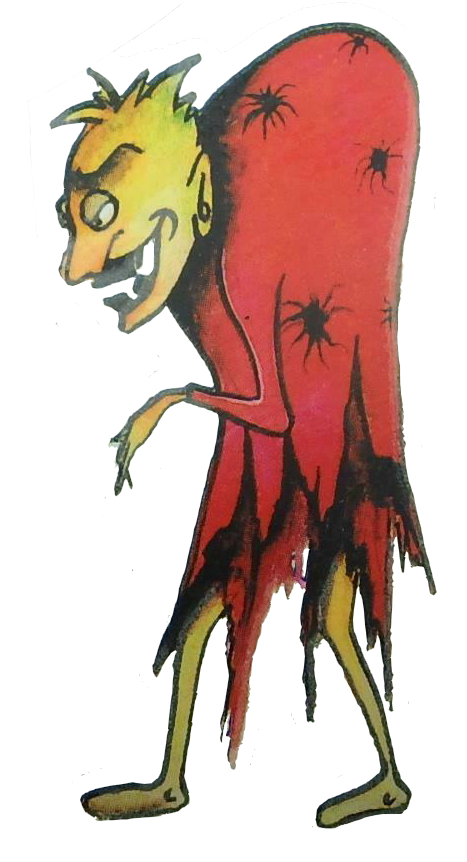 Just a yellow-skinned, almost Simpsons-looking weirdo with a hunchback, but he also has those unsettling, puckered red holes punched into his red robe, presumably into the flesh of his hump. What does he keep in there? Spiders? Like that little dude from Vampire Hunter D?? 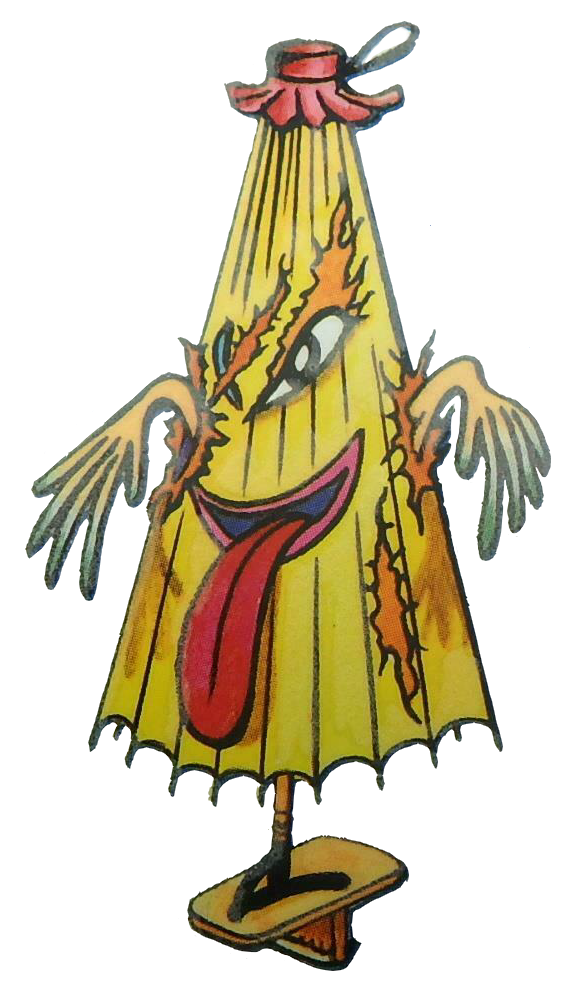 It's the classic, world famous umbrella ghost, but not quite like any other I've seen! Its single eye is slanted asymmetrically and not really lined up in the usualy cyclops-style fashion, I like the eye and the arms emerging from visible tears in the paper of the umbrella, and instead of the usual human leg for a handle it simple has a handle that ends in a wood sandal. That's really funny to me. It doesn't have a foot. It just has a sandle on the end of its stick. Cute! 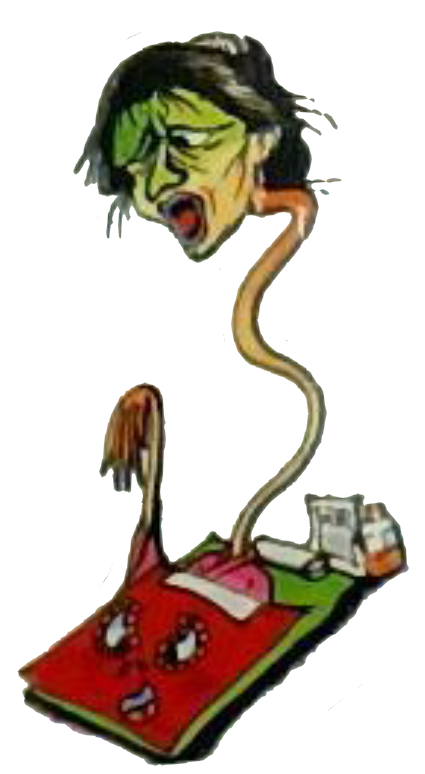 Another classical youkai, the long-necked woman! But she's also resting in bed, even has what I think are snacks and juice by her pillow, and there's a sinister face on her blanket, too? 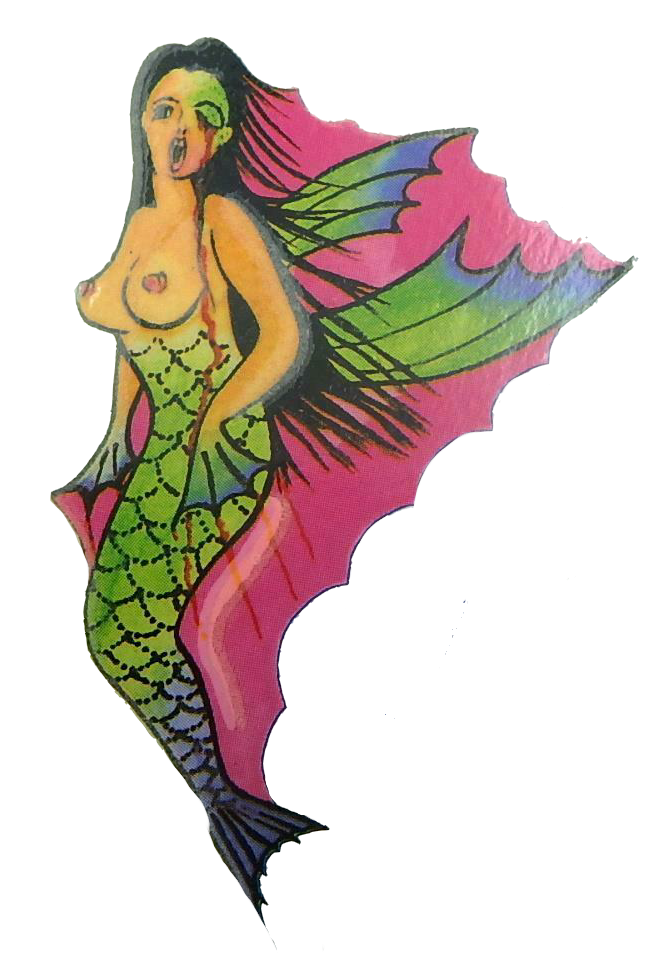 Can I actually show this? Are naked boobs finally passe enough if they're on a little painting of a monster from several generations ago? She's a bit fishier than the average merwoman, overall, as her only human elements are her arms, chest and about 2/3 of her face. The rest is all green and blue scales, with fish fins instead of hands and even a scaly green, drooping left eye that leaks blood for whatever reason. She also has a pair of big, wing-like fins on her back and I'm really surprised I haven't seen that more often!

This blue skinned, ghostly woman with white robes and long, black hair also has some sort of large wart or tumor above her eye, and she's almost certainly supposed to be Oiwa, a woman said to have become a ghost after she died of a slow-acting poison that deformed her face. 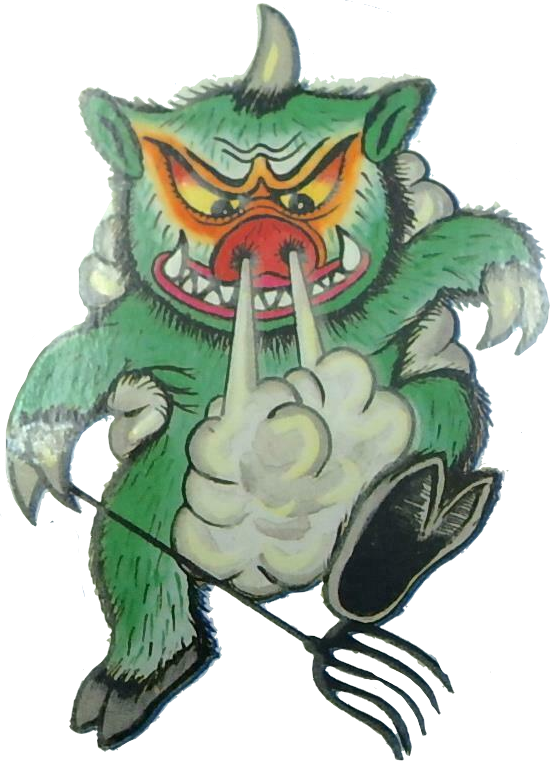 This green, pig-faced oni is covered in bristle hair and wields some sort of pitchfork or rake. The red and orange facial features look really nice against its otherwise cool color scheme! Overall tis is another exceptionally dynamic one. 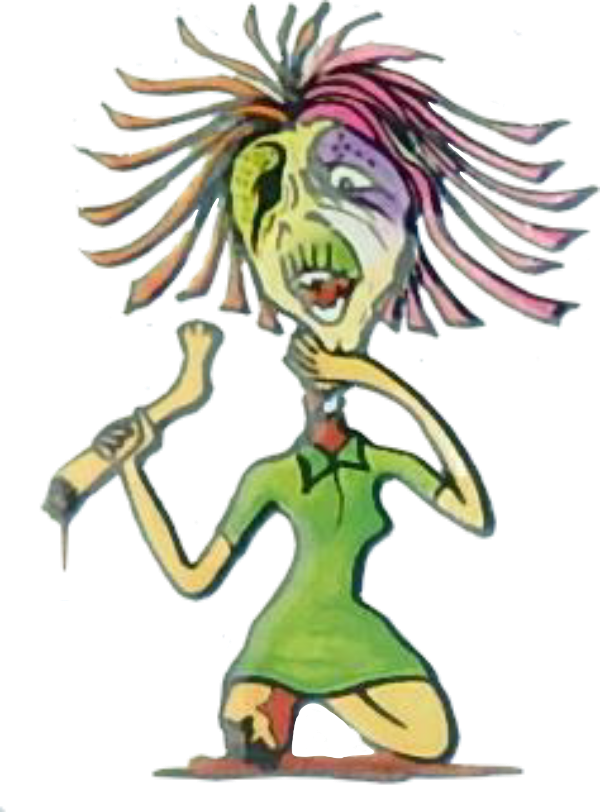 Oh, yikes, nasty! This lady's got an oversized and pretty ghastly head, her skin kind of withered, and sickly looking, one eye completely missing from a black gash of a socket and the other surrounded by purple bruising, with jagged fangs and wild, pink hair. That's not as unsettling, however, as the fact that she's removing her own head with one of her unusually long arms, and the other is already clutching the leg she snapped off from herself! 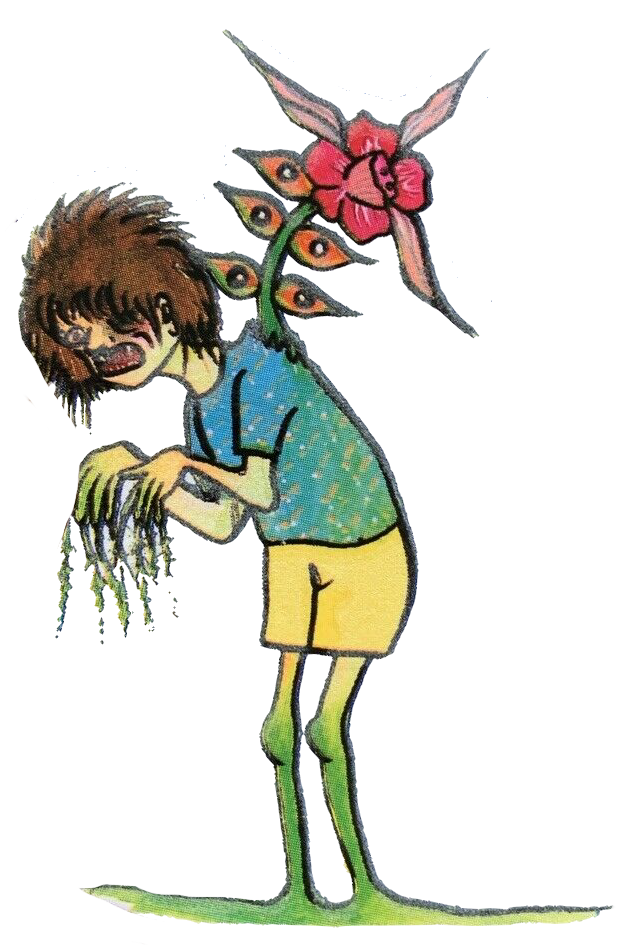 Another kid with some Kitaro DNA, his moppy brown hair almost covering his empty, left eye socket. This kid, however, is also sprouting into some sort of plant! His fingers are turning into fuzzy roots, his legs are not only fading to green but fusing into the ground with no visible feet, and an ominous, red lotus-like flower is erupting from his back, its stem lined with leaves that look like glaring eyes! This definitely feels like it's some kind of parasitic flower spirit, possibly turning the victim into some kind of ghoul - notice his fangs! - before the plant actually takes root and begins to sprout. 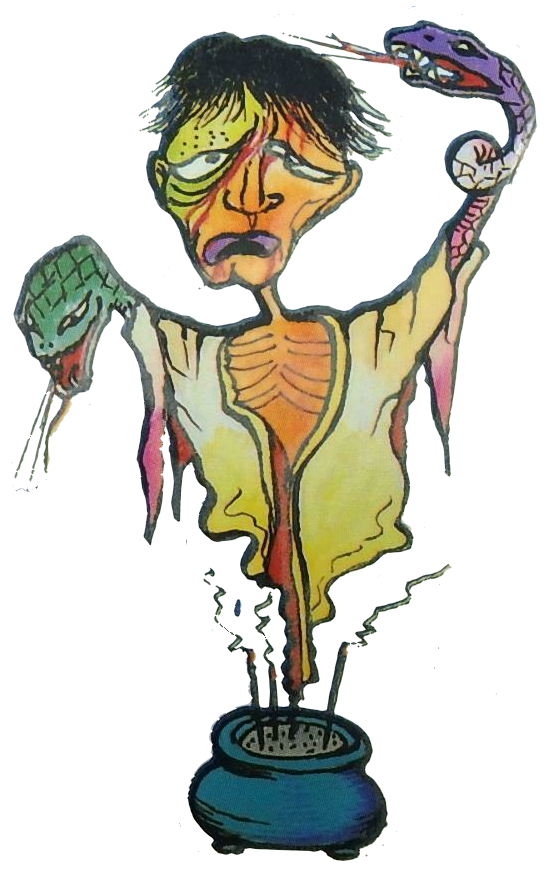 This ghost looks absolutely MISERABLE. His ribs are so emaciated, his face is so exhausted and so haggard even without the reptilian skin taking over half of it, and he's yet another one dripping blood from no particular injury. He's also rising from a pot of incense, for some reason, and oh yeha, his arms are snakes, one of which looks a lot more pleased by all of this than he does, I might add. 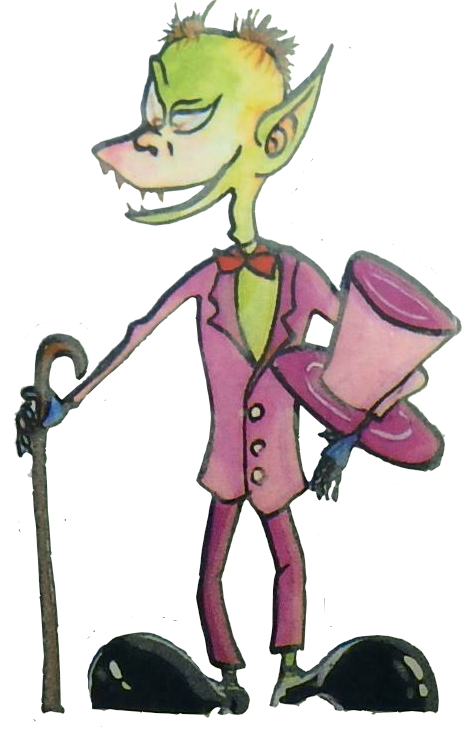 Oh my god. Yes. YES. Look at this dude. He's kind of a nondescript green goblin with a bit of a kappa-like muzzle, nasty little pointy teeth, pointy ears and a few patches of frizzy hair, but he's also got king of a pencil neck and spindly arms, a real dopey cartoon build going on, but then! BUT THEN! Purple suit, purple top hat, red bow tie, cane, and ridiculously gigantic black clown shoes. Shoes almost as big as his head. I freaking love this guy. He would absolutely be the Rat Man of these youkai, the conniving back-stabber always out to make a quick buck. You can't not love this dude.

That, or maybe he'd actually be the "host" of the "show?" The Cryptkeeper figure who tells us the stories of these other hideous specters?? 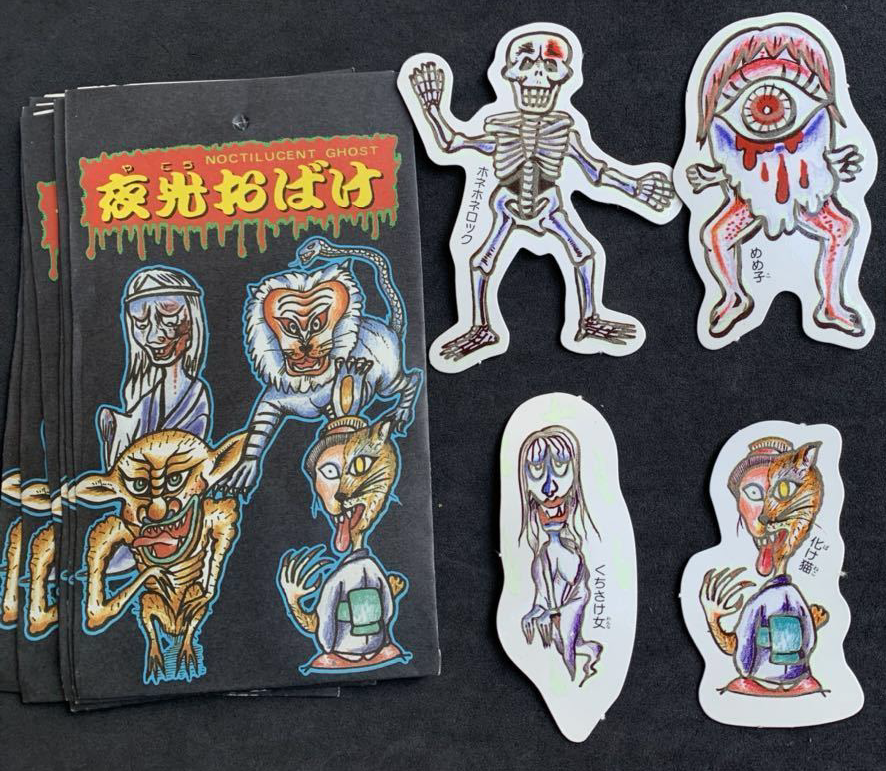 Finally, I'd like to share this glimpse at an entirely different set of similar magnets, this line apparently made out of paper with a small magnetic strip glued to the back. Most of the designs of this other set are kind of generic, except for the monster here whose name basically means "Eye Eye Girl." Just a big, dripping blob with a huge, bleeding eye, human legs and little human hands sticking out!!