The Nightmare Before Christmas and Too Much of a Good Thing


It's almost unbelievable to look back on a time when The Nightmare Before Christmas was considered a theatrical failure. It was "too dark for a children's film," according to the critics of the mid-90's, but allegedly "too kiddie," too simple for older audiences at the time. It wasn't even advertised as a Disney film here, as if they had so little faith in it, they didn't want to risk the blow against their reputation if it wasn't well-received. But its popularity grew, and soon it proved to be such a sleeper hit that Diznee became all too eager to smack its branding on it, pretending it always knew it had a work of art on its hands. Mickey was just all the sudden proud to be seen in the same room as Jack Skellington. Donald was finally answering Oogie's lonely, desperate phone calls.

The surge of new merchandising began somewhere around the 2000's, if I'm remembering clearly enough, around the time the characters also appeared in the first Kingdom Hearts, another property so weird that the big giant fat D wasn't so sure about at first.

I'll still be the first to admit that I'm vicariously proud of this success. I was one of the little weirdoes who loved this movie when it first came out, and I'm still not at all ashamed to say it remains one of the most fun, most adorable, most visually stunning movies of my lifetime, partially thanks to the passionate and masterfully talented director Henry Selick, partially thanks to the fact that Tim Burton only contributed the thing he's actually, sincerely good at: concept work.

The first time I saw actual Nightmare-branded Halloween decorations, I was actually fairly excited, and I was only surprised that it took nearly twenty years to happen. It was such a natural fit, and it had already become such a staple film of the season, the existence of life-sized hanging Jacks and Sallies was meant to be. There was no way around it.

But every year, for Halloween and for Christmas, it seemed as if just a little more Nightmare merch was on the shelves than the year before, and in at least one more major retail chain to boot. As of fall 2021, Nightmare Before Christmas Halloween decorations and collectibles are now available at Wal Mart, Walgreen's, Target, Lowe's, Home Depot, Petsmart, Petco and dozens of others, in some cases marketed as a chain's primary "theme" of the year. 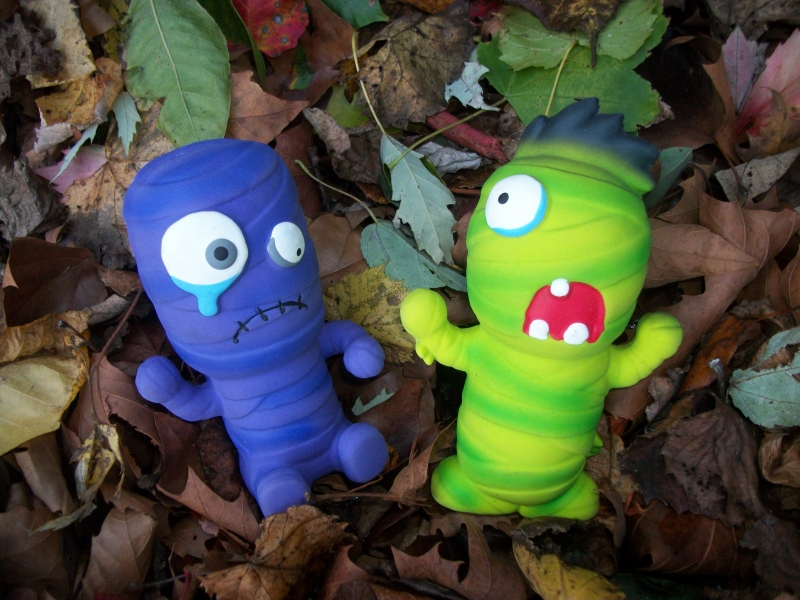 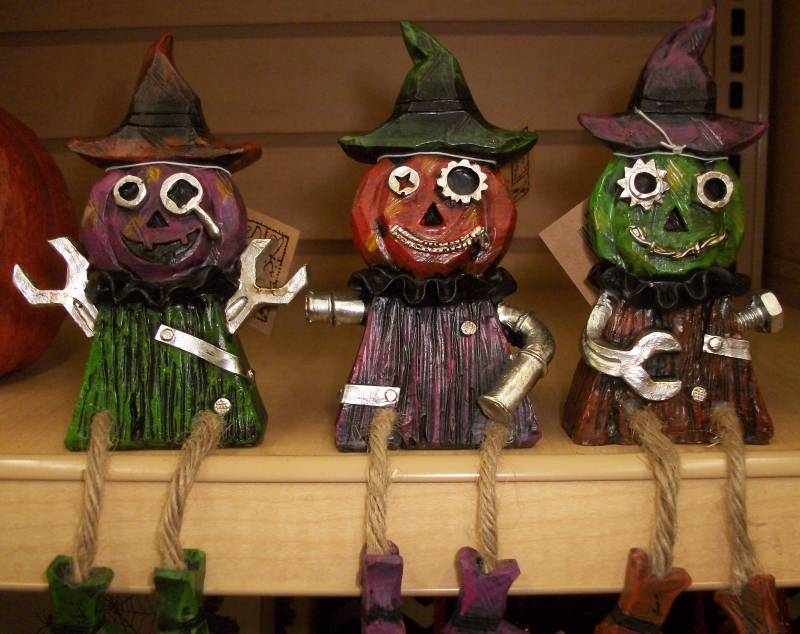 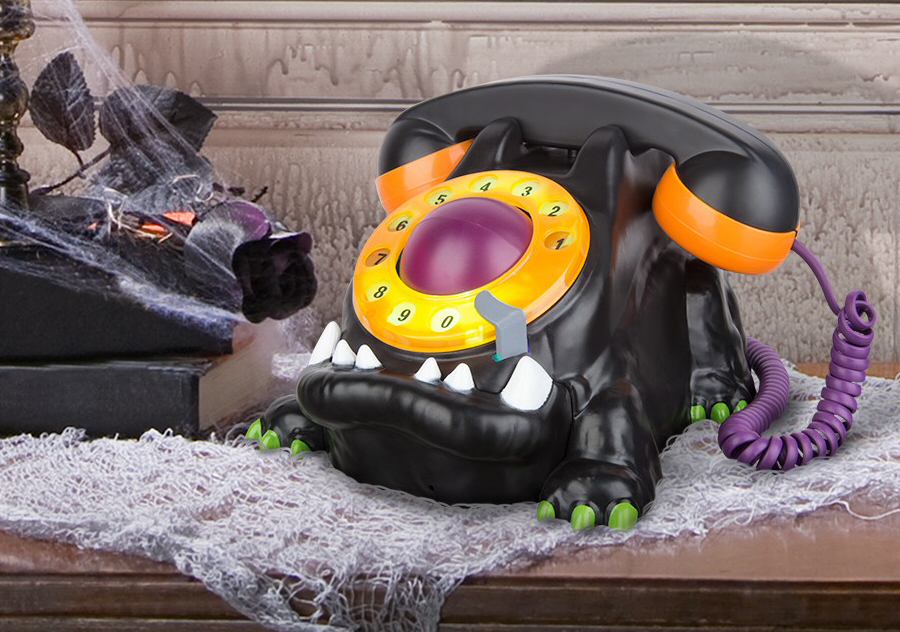 The majority of Halloween decorations have always been new, unique character designs. Even when they represent such famous icons as vampires or witches, no two are ever perfectly the same because they aren't usually just lifting from a copyrighted property. It's what made Halloween a fun part of my website in the first place, hunting for imaginative, novel new twists on the usual ghosts and vampires year after year, but '21 actually marks the first year I've made it to September without spotting almost anything new to me, besides what I've already reviewed from the Home Depot, Petsmart and TKMaxx. We can chalk this up primarily to the fact that this year's crop had to be grown under the ravages of a global pandemic, obviously, but that only makes the Disney invasion all the more noticeable, and it isn't just limited to Nightmare, either: Marvel Superheroes, Star Wars, and countless Fox film properties are more prevalent in the seasonal aisles than I've ever before, all now owned by the same obscene, all-consuming Akira-grade monstrosity of a megaconglomerate.

Where once there may have been all-new pumpkin-headed ghouls, goofy skeleton monsters and oddball critters with no established name or backstory, you're now just as likely to see rows and rows of "Iron Man" Jack O' Lanterns and Baby Yoda candy bowls. I have no complaint or criticism of anyone enjoying these franchises or collecting their merchandise, but it's always sad to see original ideas crowded out by the same recycled icons, and nothing short of alarming when so much of our popular culture is owned by the same profit-driven empire.

But, nothing I say would ever make an impact on any of this, so while I'd always rather see completely new ideas for Halloween decor, I still have some feelings on how Nightmare Before Christmas products could be better.

My Suggestions For Superior "Nightmare Before Christmas" Halloween Products If They're Just Going to Keep Coming Anyway: 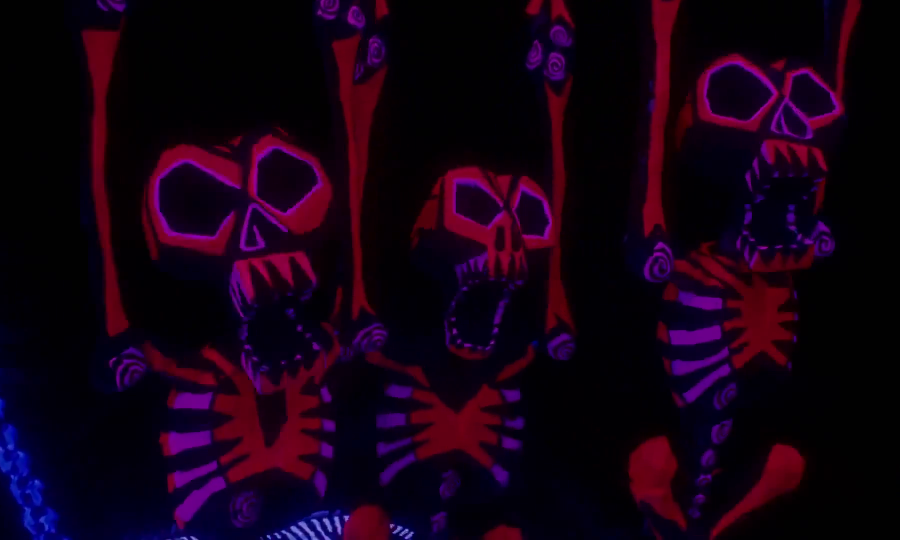 Life-size skeletons are already a Halloween staple, and look good even made from cheap materials that anybody can afford. How neat would it be if you could own the same jagged, chunky skeletons seen in Oogie Boogie's lair? They could be made in their plain, bony colors as well as their "blacklight" patterns - and be made actually blacklight reactive with ease. 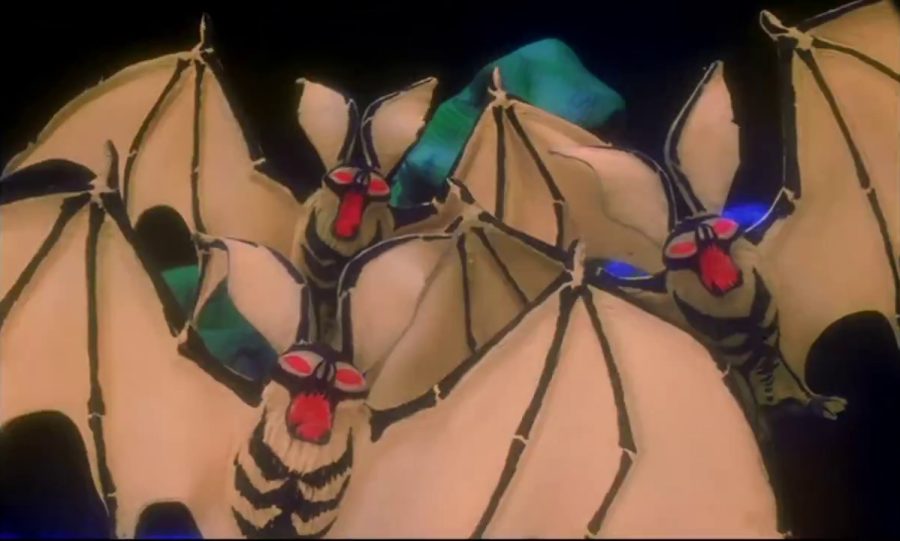 Not only would glowing, skeleton-patterned bats look amazing in any context, but the actual design of Oogie's bats is adorable. Their tiny faces and huge ears are reminiscent of some real world species, which alone would make them more interesting than the common, generic Halloween vampire bat. They could sell these individually or in packs of three, hanging off a chain like they do in the film. 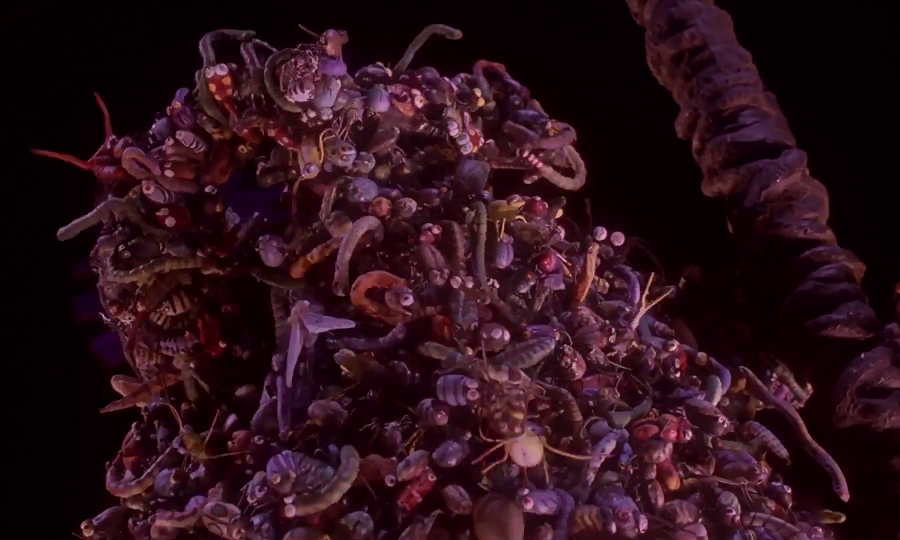 I could see them just slapping some new branding on the same generic rubber bugs we can all find at the dollar store, but giving them quirkier color schemes would be a nice gesture, and it would have my full respect if they were entirely new, unique bug sculpts. Just give any nondescript insect critters big, goofy eyeballs and even the most generic "burtonesque" color palette for instant "official" Oogie Bugs actually worthy of his name. 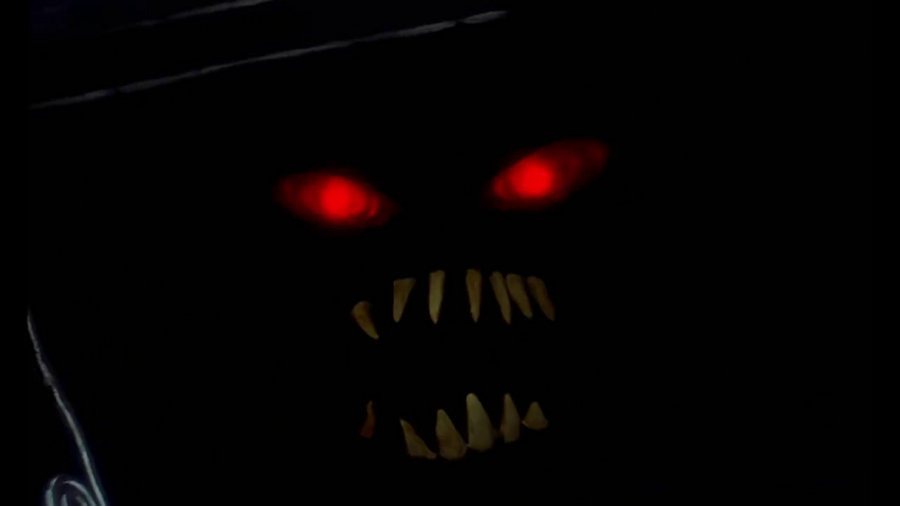 They already make scary, light-up eyes you can place wherever you like as a classic Halloween decoration (or prank) so this is pretty self-explanatory, include the ring of floating teeth and anyone who's seen the film enough times should recognize precisely the monster they're looking at, but they don't really need to in order to appreciate it. It's a nice, respectable, all-purpose scary visage to place anywhere, really.

"Man Under the Stairs" Stakes

While a full body prop would be cool, this is a monster whose whole "gimmick" is that he hides himself, reaching out with his freaky arms and long neck. His arms and head alone would be perfect as individual decorations you could put just anywhere, coming out from a bush, a closet door, a trash can, or of course an actual stairwell.

Anything With Undersea Gal 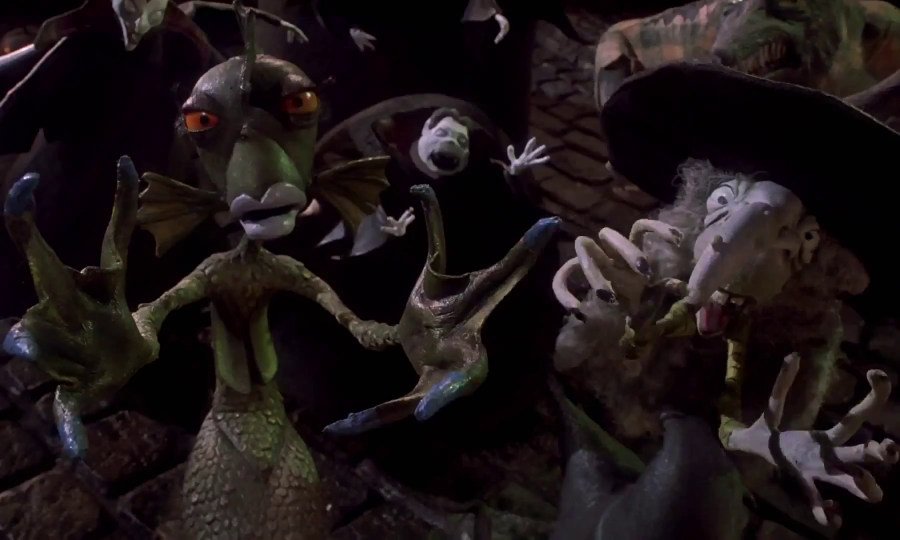 Mermaids are probably more popular right now than I've ever seen in my life, and that already includes creepy Halloween mermaids these past couple of years. Strike while the iron is hot, Walt! her design lends itself all too easily to one of those hanging characters with a plastic head, cloth body and noodly, bendable arms! Maybe make her out of foam rubber, though? Like a pool noodle? Then people could actually put her in water without messing her up.

I'm biased, since this is my favorite Halloween townsperson, and probably not considered as iconic to the film as a lot of others, but you don't even have to make the entire melting guy; he could be popping out of a sewer grate, like his first on-screen appearance, with the same green lighting effect. 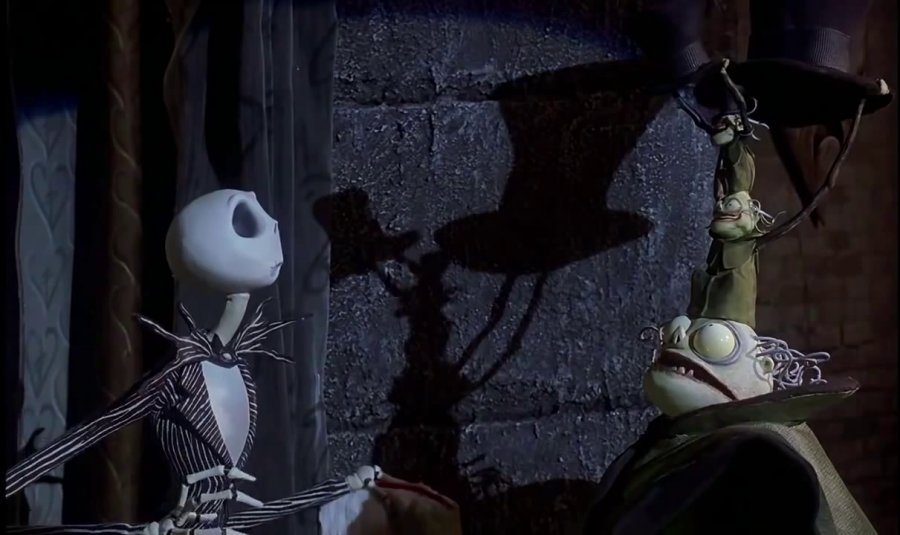 Not to put two hat-based suggestions on the same list, but this character is actually pretty well remembered for this moment in the "Town Meeting" song. A real hat that looks like the two mini Hydes on your head would be a super cute costume prop and collector's item, or even just a single Hyde that fits under a single removable hat. 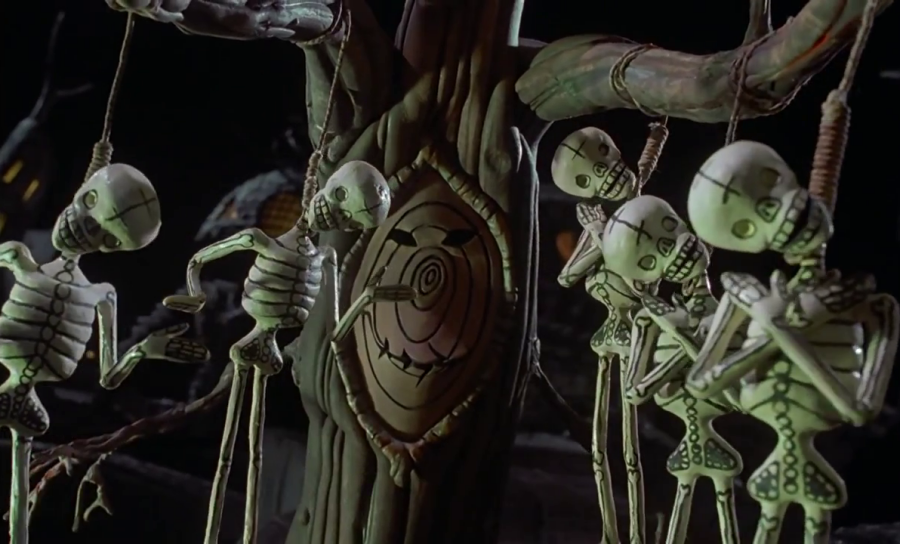 You can purchase a number of products that turn an ordinary, real tree into a tree with a face, spooky or otherwise, and this would be an easier one than most! Hangman Tree's face only needs to be a single, flexible rubber piece, and it could include at least two of the simple, little hangman skeletons to dangle from the real tree's branches, easy to make out of even pretty cheap plastic or foam. 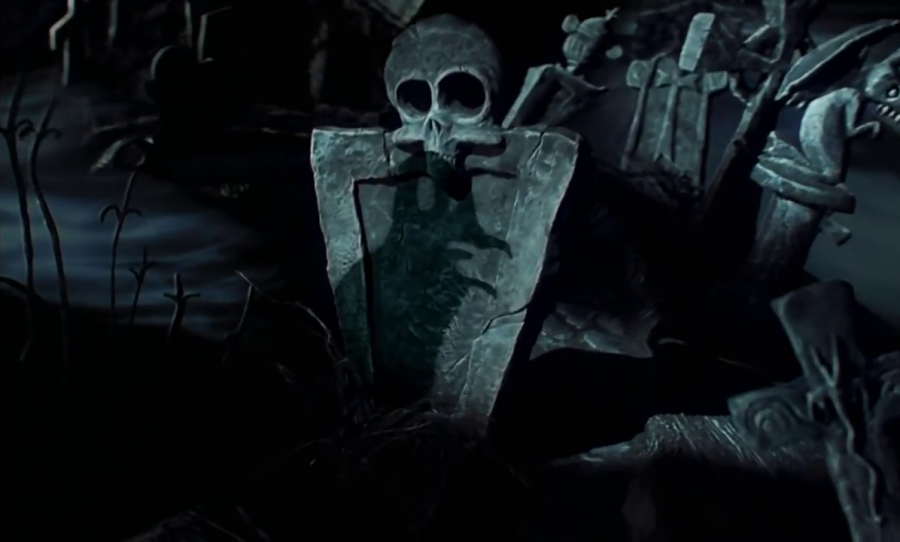 You can buy miniature "Nightmare Before Christmas" branded gravestones already, but they're modeled to look like stones for actual characters, and the one for Zero doesn't even look like the one he canonically has. The most interesting and tasteful tie-in decor wouldn't be immediately recognizable as tie-in decor to most people, but who wouldn't enjoy these snazzy looking stones as life-size foam props anyway??

ANY Home Decor From the Film Itself 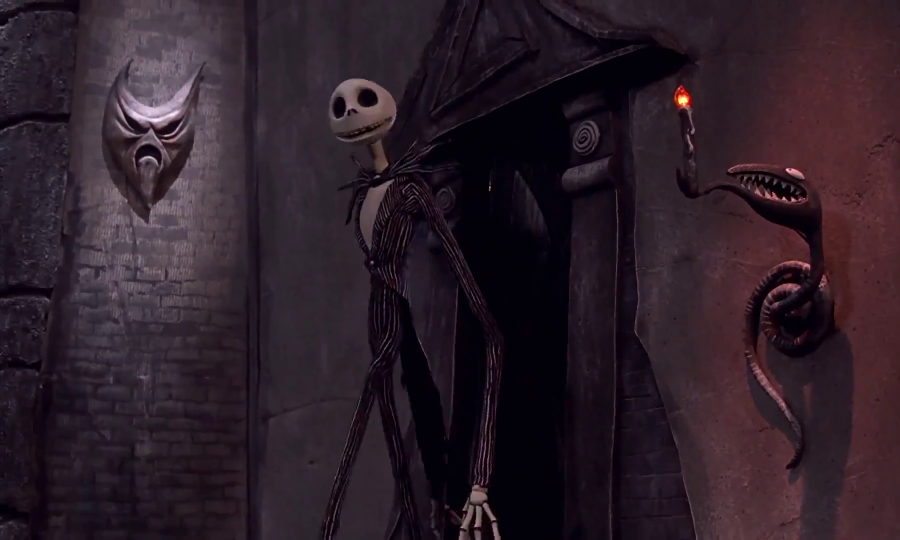 In the same vein as the tombstones, look at both of those things on the walls in this scene. If you recreated either of those as real products, very few people would recognize at a glance that they're from a movie, but nobody would have to. More generic Halloween products sell out every single year. I see people fight over plain, black cat candleholders and fabric spiders. I see people buy them up and scalp them on the internet. You don't think that eerie demon mask or gothic snake sconce would make a killing?? You'd have nothing to lose. This movie isn't just five or six recognizable, famous characters; it's an entire aesthetic of its own, even distinct from other films that Tim Burton designed for. You're going to make money either way and I know I can't stop you from churning stuff out...you could just stand to think in a slightly larger box at the very least.

Maybe this market saturation dooms itself, though? Maybe people will get bored enough, soon enough, of seeing the same old faces everywhere that a dip in sales will at least marginally quell the maniacal rodent's campaign to own as much as it can of even our public-domain holidays. Or maybe something, who knows what, will teach them a lesson in humility as hard as the one a skeleton may sometimes learn when he, too, tries to force his branding everywhere it wasn't asked for.