So back when I shared only my first review of what's more properly called Shinbi's Apartment, I said that its only major gaming tie-in was an app, and I assumed it was available only to its South Korean audience.

It turns out, you can download and play a fully English version yourself, it's just that it's not called "Shinbi's Apartment" or even "The Haunted House" like its Netflix dub. It's called Getcha Ghost, and languishes in relative obscurity even though it continues to update daily. Is it worth it? Well, it's free. Is it fun? Well, that's going to be up to you, but it also sheds a bit more light on the nature of the entire franchise, so this review might possibly help make sense of the ghost reviews to come.

In Getcha Ghost, you take control of one of four human kids from the anime series and a team of three ghosts. The most direct means to acquire more ghosts is the AR capture feature, which is a bit more basic than that of Pokemon Go. There's no map feature and no need to go outside; wherever you are, you can just expend certain items to make a ghost appear, then furiously tap the screen to throw things at it until its HP reaches zero. If you play the vampire kid, because there's a vampire kid, you get to throw bats!

Some ghosts are stronger, and require weapon upgrades with limited ammunition. Fortunately, almost everything in this game can be acquired by watching an ad rather than spending any real money on microtransactions. Microtransactions are there, yes, and there's an obnoxious number of automated ad breaks if you don't spend $3 to turn those off, but in less than a day I had my three favorite ghosts without ever having to buy anything.

Once you've captured a ghost, it takes on the cuter, more simplified style we see during the closing segments of the anime. Somewhat disappointingly, there is absolutely no way to go back and view it in full-size detail whenever you want; you'll only see their "true" forms during the AR encounters, or as your opponents in the single player battle mode. A middle ground does exist in the form of "X Ghosts," which are the more gruesome chibi's we see during the anime's capturing and summoning sequences, treated here as more powerful variant species. A downside is that while every ghost already has an X form in the show, only a small fraction of them have been released to the app.

I do really appreciate that the profile screens tell you where the ghost debuted in the anime series, films or other media, though I do think you should be able to zoom in on your ghost with a tap, and it definitely would have been a sensible place to look at their "true forms" again. I'm especially surprised there isn't some kind of feature to view them individually in AR mode again, which would allow players to take their own scary "ghost photos" wherever they like.

You can at least keep encountering the same ghosts a limitless number of times, if you miss seeing their bloodstains and talons. You'll notice an "x5" on Slenderman's capture screen here, because every time you capture the same ghost again, it simply stacks. These extra ghosts can be "spent" to level up as well as create the various fusion ghosts, and almost every time you capture a spirit, it's already "worth" several at once.

Something I was unaware of before the app was the existence of "G" forms, too. These are rarer design variants on select ghosts. Some will feel like an aesthetic downgrade, depending on your tastes, but dapper Slenderman here is pretty entertaining; the period and style of their clothing is often the biggest change, . These never appear in the anime, probably because most of them just wouldn't make logical sense, but that just means there's something fun to discover exclusively through the app.

I believe G Ghosts, like X ghosts, are also more powerful than their standard forms, and we keep mentioning things like levels and strength, so let's get to the battle system, which admittedly might be where gameplay will lose some people: 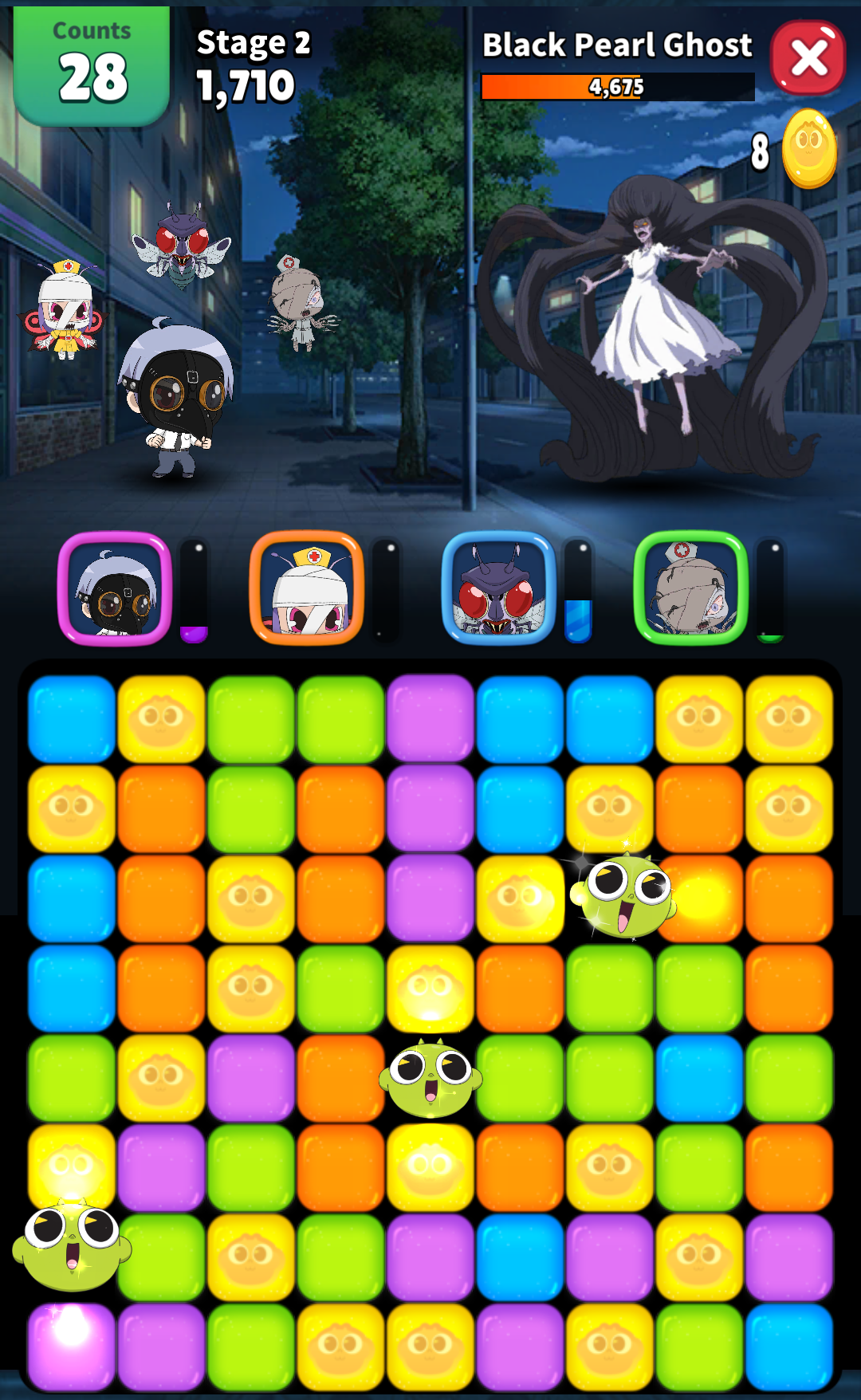 I do believe it's the same battle system used by a few other app games, or at least very similar to it: instead of selecting your ghosts and their attacks directly, your job is to break blocks. Each of your ghosts is assigned a color, and whenever you smash tiles of that color, the matching ghost will damage the opponent in proportion to the number of tiles broken. This will also fill up a small gauge for each ghost, and once it's full, you can tap the ghost's icon to activate one of its special abilities. The exception to this are the gold blocks, which do nothing but give you gold and otherwise take up space.

It's hard to get used to, and it's not all that intuitive to track what the attacks and abilities are actually doing, but your block-breaking fortunately isn't timed, so you don't just have to frantically mash the screen until something goes right.

There are several different types of battle that include a single player mode against a constant stream of ghosts, co-op with random players to farm items, and online battle against a friend's team, so they definitely mean for you to strategize and put thought into how you build your team.

Every ghost in the game not only has unique stat spreads and abilities, but four unique signature items that rovide some kind of bonus. There's a chance to receive one of these items every time you capture a ghost, but it's a random item out of all possible items, not just one belonging to that ghost in particular, so you won't immediately complete a spirit's inventory just by finding it multiple times. I think this was a good decision; it adds extra incentive to keep capturing even if you've collected all the ghosts you could want, and it can be fun to learn what the personal accessories are to every monster. It makes them feel just a little more fleshed out!

There are many, many more features in this app that I haven't gotten into, mini games, events, missions, character customization and more, but for the most part, it's just a fun, fast, simple monster catcher that doesn't force you to spend money quite as badly as so many others.

Despite being available in multiple languages, the app is almost as obscure outside of Korea as the TV series, and it doesn't help that they have completely different names. Kids who saw and enjoyed the Netflix anime dub might have no idea that an app game even exists, though the app itself includes promos for the anime and even direct links to watch a few videos. 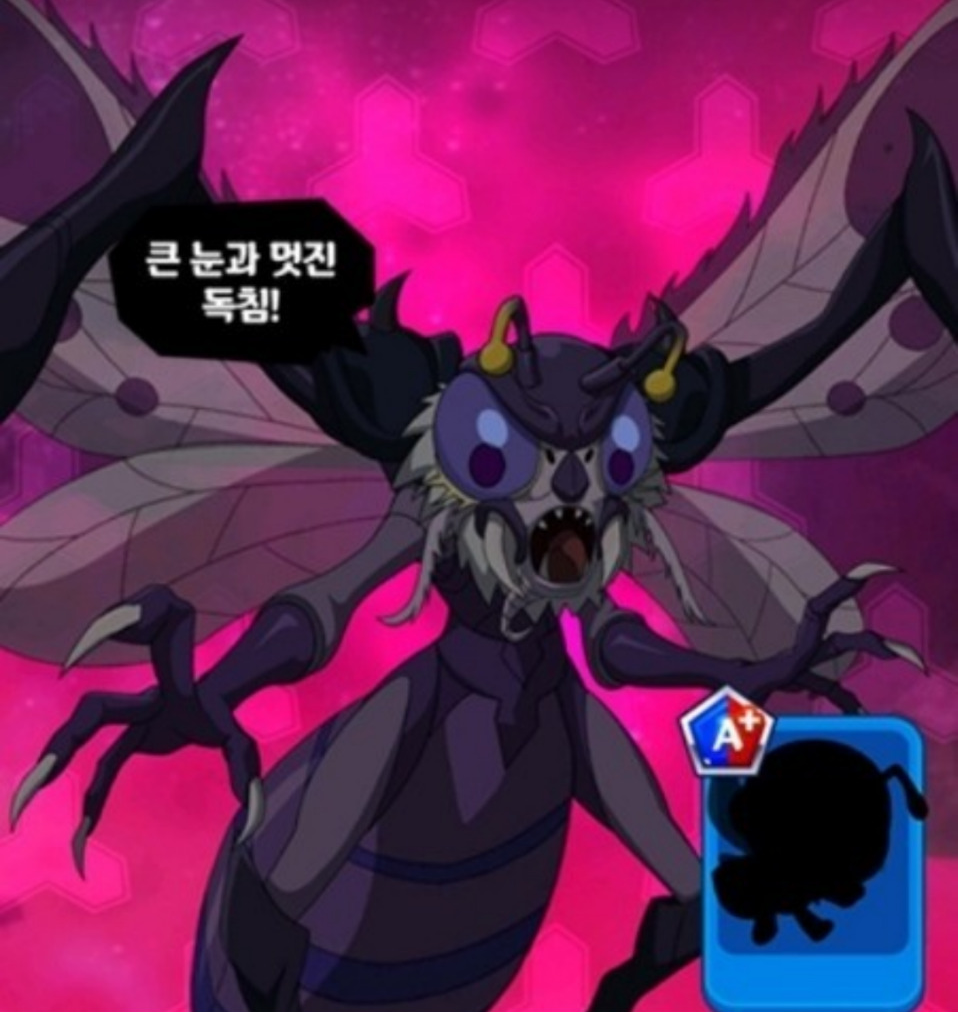 If nothing else, the app is worth downloading and rating just to boost the chances that this IP will gain more of a following on our end of the globe, and just to see what new ghosts will get released next; even as I write this, you can still find cute "beach outfit" variants on a couple ghosts as part of a summertime event, and they've only just now teased a new fusion ghost combining Beelzebub with another insect type!