Today's "bug" is named basically demon womb. Ominous! It's said to begin its existence as a small blood clot, but if it grows large enough, it develops a bull-like head at its center and a ball shaped body creased in such a way that it resembles a serpentine form curled into a ball. Like yesterday's "wild boar," this parasite has an urge to stampede all around the host's body, and it has an incredibly violent nature. Unfortunately, its body is only capable of slowly creeping around like a slug, which causes it even more stress.

Kitai is called "demon womb" because it sort of resembles a false womb, and because it also tends to mess around with the uterus (or live there). Despite the fact that it moves so slowly, it still tramples the body organs and its rage sort of rubs off on its host, which results in all the symptoms of what the West once called "Hysteria."

I like how the red bull head at the center of this blob does kind of evoke an embryo in a womb, and the idea of something that superficially looks like a curled-up snake is pretty interesting as a design concept!

This is one of the few bugs we'll be looking at this month that just doesn't qualify for a real parasite counterpart, because it's basically nothing but a Japanese take on "hysteria." These days, the word is used exclusively to refer to emotionally reactive behavior from just about anybody, but it was at one time considered a medical condition exclusively suffered by people in possession of a uterus. Numerous explanations were offered as to how the reproductive system triggered "irrational" behavior, but by far the most outrageous was that the uterus sometimes detaches from within the body and roams about like some sort of animal, inadvertently causing damage to the other organs.

Nothing like this happens, of course, yet the idea seems to have spread quite far around the world and was still accepted by "experts" for far longer than you might think. Even after the medical world came to understand that the uterus is not in fact a hobgoblin, it took until 1980(!!!) for "hysteria" to be retired as an acceptable diagnosis, far too late to save generations of women who were unnecessarily medicated, institutionalized, in some cases even lobotomized over a completely fictitious kind of "madness." 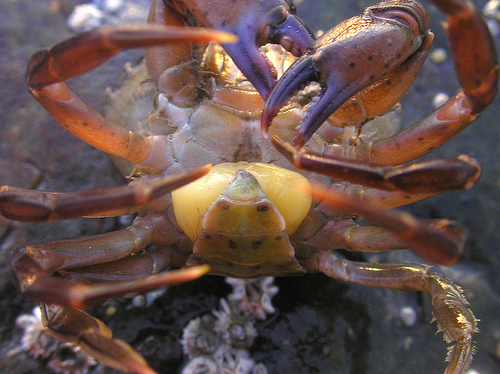 We're only looking at human parasites - or parasites that can get into humans - for these entries, but if you want something in nature that could almost be described as an actual "demon womb," you'll have to look to crustaceans. Rhizocephalan barnacles, which I describe further here, grow precisely where a crab would normally carry its eggs and even compels the host to care for the parasite as they would their real offspring. This parasite does not, however, only target hosts that would normally produce eggs on their own; in a male crab, it simply alters the host to function and behave more like a mother.