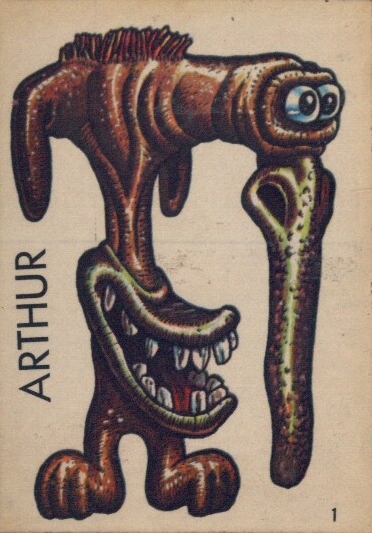 Ugly #1 is one of famed cartoonist Basil Wolverton's designs, and typical of his absurd caricatures. I like this creature's long, dangling nose, which kinda looks like it might be used in conjunction with the feet in a weird, loping locomotion. Each of these basic Uglies came with four possible names, so I'll be referring to them by their numbers. 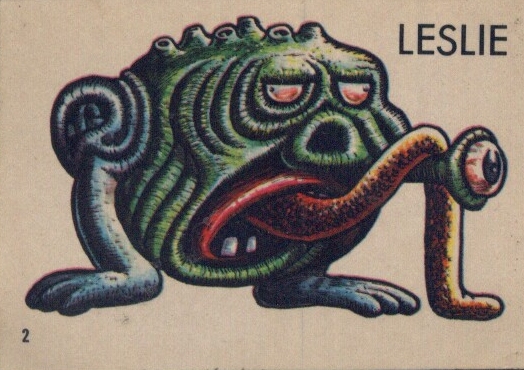 Ugly #2 gives me a toad-like overall impression despite having nothing necessarily in common with a toad. The third, stalked eye is rather cute, though its "normal" eyes are much less so. Of all Wolverton's Uglies, this one looks the most to me like it belongs in a fantasy adventure game, perhaps as a sidekick to some sort of goblinoid beast. 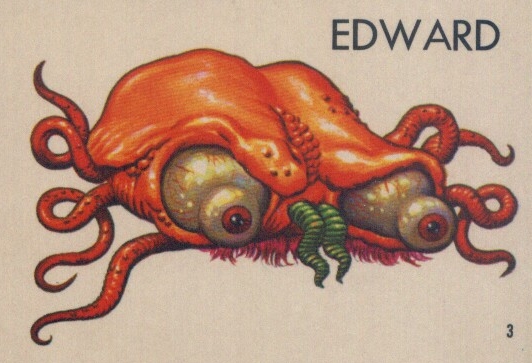 I usually like to save my personal favorites for the very end of these reviews, but I'm going in order, and my single favorite Ugly is only #3 of the set. It's hard to explain what's so special about this one, really; everything about it just "clicks" for me. I like the fuzzy underbelly, the flattened two-lobed anatomy, the oddly shaped binocular-like eyeballs...it's all just incredibly cool and alien with a simple, compact little bug-blob shape. I must not have been the only one to favor this particular Ugly, since it was also printed as a twelve piece puzzle, a single piece included in every sticker pack! 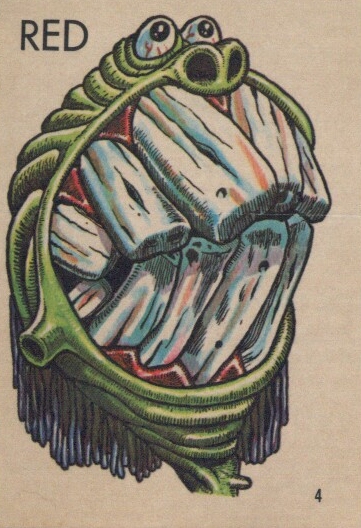 #4's face is almost entirely gigantic, jutting teeth, and the first of many Wolverton Uglies shown only from the neck up, leaving us to ponder what the rest of these bozos look like! I suppose there doesn't have to be much more to them, though...I like to think at least a couple really are just heads and necks, possibly rooted in place like some sort of horrendous plant life. 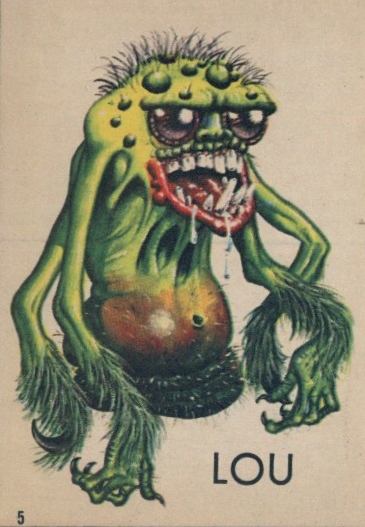 #5 gives me an ape-like impression, even though its body terminates in a legless, slug-like stump and its second set of shaggy, knobbly arms are more insect-like than anything else. I also enjoy that gummy-looking flesh stretched between its head and torso. 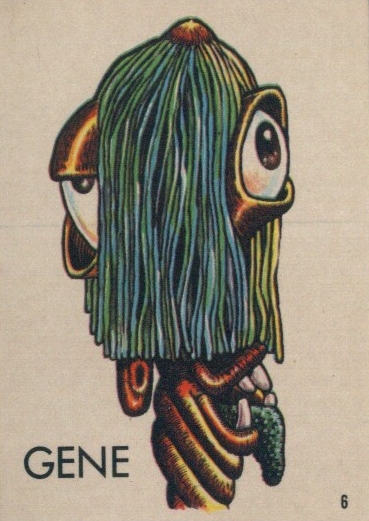 #6 is one of my favorite Wolvertons, with the almost umbrella-like form of its twisted stalk-head and dangling hair. That seems to be either a nose or an ear dangling opposite the mouth. 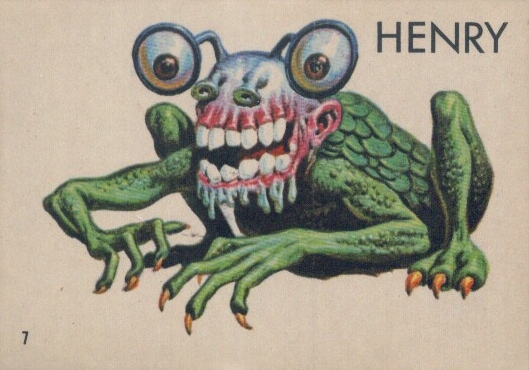 #7 has a rather mundane, reptilian body, but that only makes its face seem even weirder by contrast. I like the tubular nostrils where you would normally expect the eyes, giving off a very different personality depending on how you look at him. 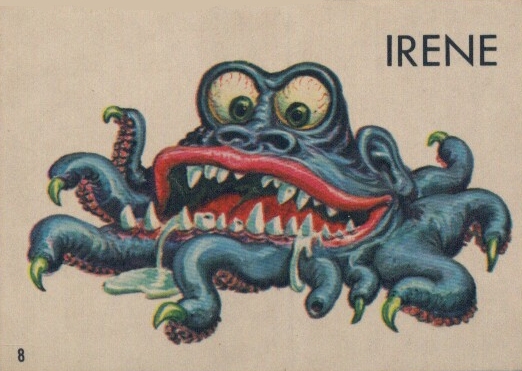 #8 Reminds me of various fantasy game creatures that would come decades later, including Final Fantasy's Ultros, Malboros and Earthbound's Master Belch. While the face sort of combines that of a frog with a gorilla, the overall effect makes me think "hippopotamus." I only noticed now how the lower teeth bizarrely continue along one of the tentacles! 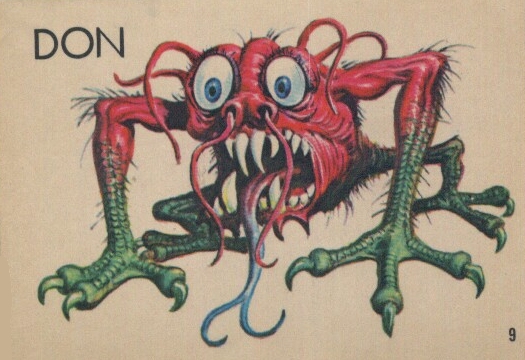 #9 has a sort of "Chinese dragon" face going on, but on a scrawny, chicken-legged little gremlin body, the kind of thing that probably scrabbles around jagged rocks in the fiery underworld. I enjoy its panicked expression, like it's more afraid of us than we are of it, but it hopes it can put on a good bluff. 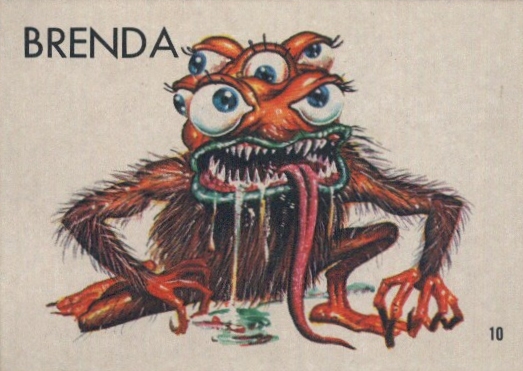 #10, on the other hand, looks a little more confident in its horrendousness. This shaggy beast has all the makings of a perfect childhood closet-monster, with its slavering mouth and many goggling eyeballs. You can tell just by looking that its preferred diet consists of "anything poking out from under a blanket." 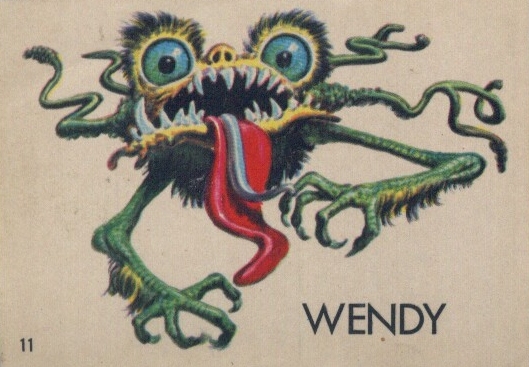 With its branching tendrils and shaggy green coat, #11 gives me the most plant-like vibe of any Ugly, though the resemblance is really only superficial. The thin, blue tongue atop the broader, redder tongue is an interesting detail, implying some peculiar sensory function or feeding habit we can only guess at.