A year after the original Uglies hit the scene, a second wave introduced a slew of new Norman Saunders creations, this time only hideously ghastly heads. These were mixed with reprints of some popular Uglies from the first batch, now with only two possible names each and no longer identified by number. 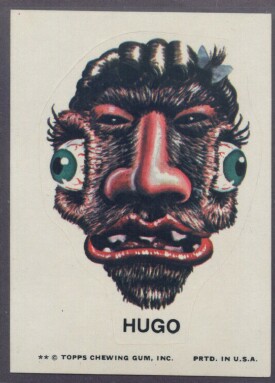 The first of the new horrors to review is this hideously abnormal sasquatch. Like many Uglies, each set of eyes makes a very different face to look at. The hairstyle is rather cute for such a scuzzy, mutated oaf. 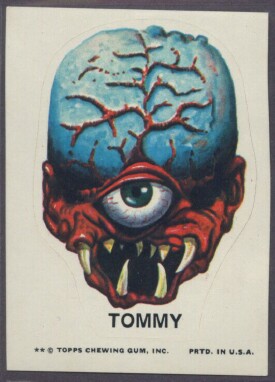 This fanged, big brained cyclops would make an excellent alien invader, and would be quite menacing if he didn't look so relaxed. Relaxed, and maybe a little turned on. Alright, maybe he's still pretty menacing. 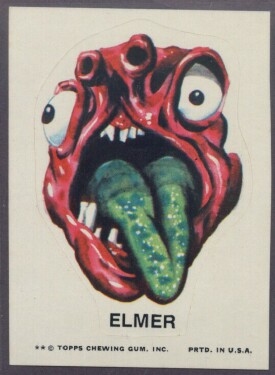 I get a tapir, pig and mole-like feel from this walleyed weirdo, who probably slobbers all over everything with his nasty, fat green tongue. I'm sure the rest of him is flabby, greasy and thoroughly unpleasant. 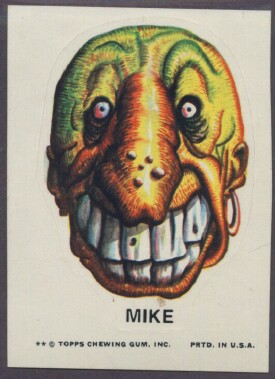 This one is quite frightening with its huge teeth and beady eyes. It's also...well...step back and look at the nose from a distance, if you don't see it already. I don't think we want this guy anywhere near us. Ever. 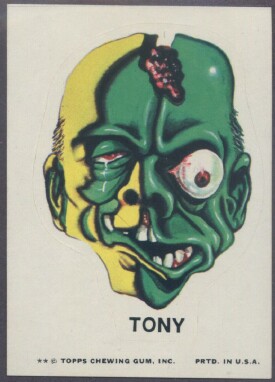 Except for the oozing cranial wound, this guy suffers some unsettlingly realistic birth defects, and appears to be crying. I have to say this might be the "darkest" and least whimsical of the Uglies. 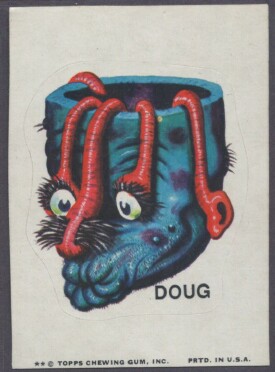 This guy, on the other hand, is classic Ugly material, and while designed by Norman Saunders, it seems to pay homage to the caricatures of Basil Wolverton, who did not return for this sticker set. I love how the facial features are on either tentacles or parasitic worms (I'm sure you know what I prefer) and could conceivably be in any unnatural arrangement. The sphincter-like mouth is fairly creepy, and this guy must look weird as hell if his tenta-worms were to flail around or retract. 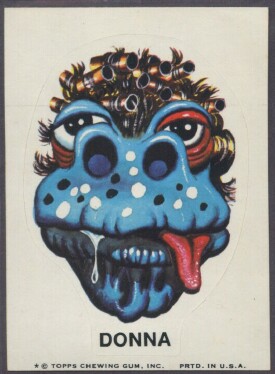 This drooling toad-hippo lady apparently thinks she only needs to curl her hair. She's wrong, of course; I'm sure she's just as beautiful the natural way. 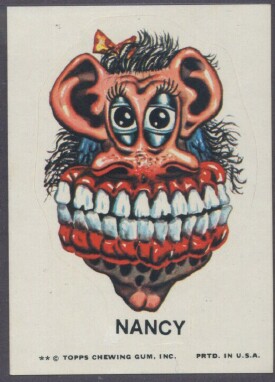 I like how many of these have little bows in their hair. This one has a truly terrifying mouth, with gums and teeth far outrgrowing the confines of its head. The little holes in the lower jaw are also a tad disturbing. 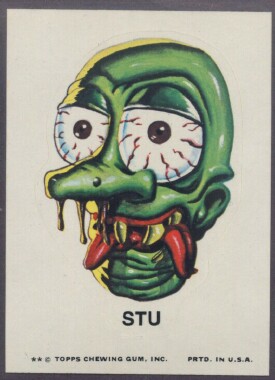 This guy's most obvious feature is the size of his eyeballs, but check out the extra tongue poking out of those rotten teeth! I also wonder if that's dangling snot or just strips of excess flesh. 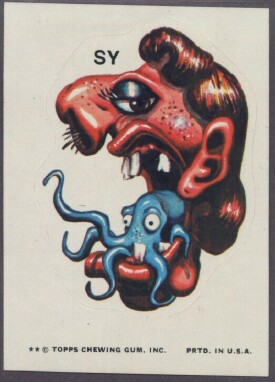 I really wonder what this guy's story is. He's just a gross, distorted humanoid on the outside, but there's a bright blue octopus apparently living in his mouth. Maybe that's the shameful secret behind his singing career. 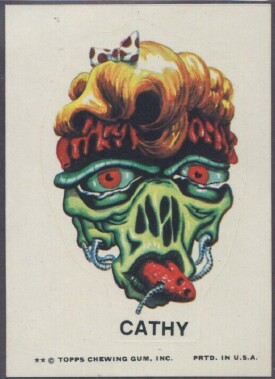 Another bow! There's a whole lot going on with this lovely lady; her hair seems to be hiding an exposed brain or vaguely brain-like alien tissue mass, worms or tentacles perforate her jaw and tongue while her nose is just a cluster of rotten holes. There's pretty much nothing here that isn't sexy. Her eyes are just dreamy. 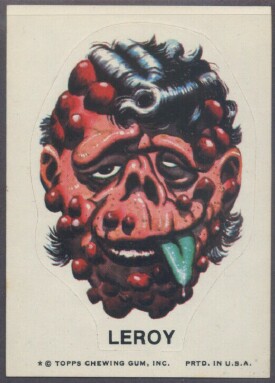 This boil-covered ape-man looks like a total sleaze. I'm pretty sure this is what most of you look like when you're trying to pick up women. That's the kind of face that says "don't ingest anything you're offered within a mile of this guy." He might also make an excellent mascot for an anti-drinking campaign. 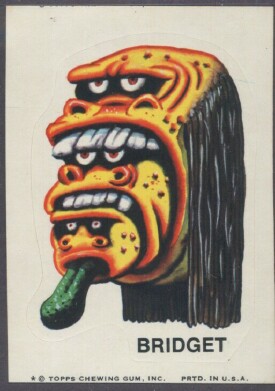 There's something extremely funny about this series of nested heads all making the same stupid expression, and the ridiculous tongue just clinches it.