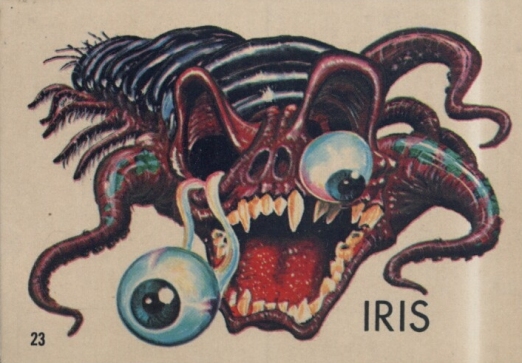 #23 was the first Ugly I recognized as one of my mysterious rubber toys. This one is easily the most "evil" looking Ugly with its hairy squid-maggot body, dangling eyeball and truly menacing, diabolical ghoul-face, but I like to think it's really a kind and gentle soul. 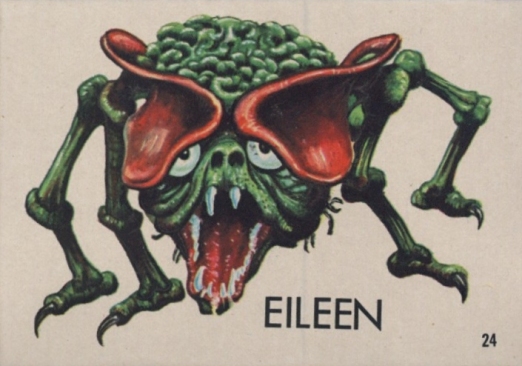 Can you imagine a more pitiful-looking mutant than #24? I'm not sure if its face says "lobotomized vegetable" or "pleading to die" but either way, it's pretty comical. The bony plates or shoulder blades are cool, though they also seem like they restrict a lot of blood flow to its brain. 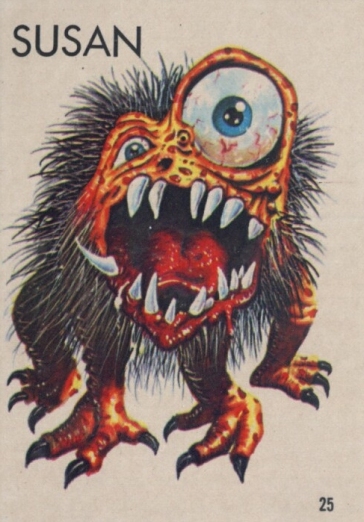 #25 would be just another hairy, snarling beast if not for its one morbidly enlarged eyeball, adding a unique Ugly Stickers touch to this simple, savage bugaboo. 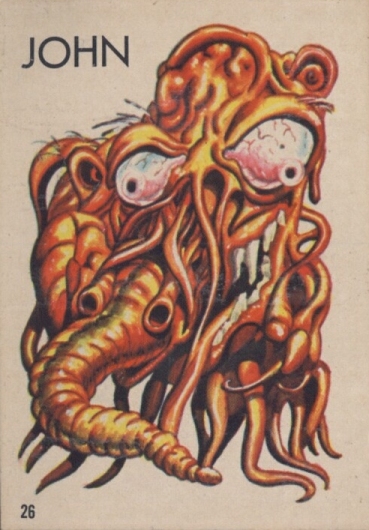 Alright...it's only my second or third favorite, but objectively speaking, nothing lives up to the Ugly Stickers name like #26. You know you have one hell of a monstrosity when it floods your mind with simultaneous impressions of human, cephalopod, annelid, pachyderm, amoeba, fungus, candle wax, pus, entails, genitalia and possibly a spaghetti dinner. This incomprehensible abomination makes the creations of H.P. Lovecraft look like neopets. It's a design so beautifully twisted and insane that it deserved so much more than a sticker and a rubber bug. This thing deserved its own horror movie, which would have probably been banned for graphic depictions of small children being sucked inside-out and still screaming as their tissues are dissolved from their bones, because what else would this thing do?

Ugly #26, you are positively magnificent. So are you, Norman Saunders. 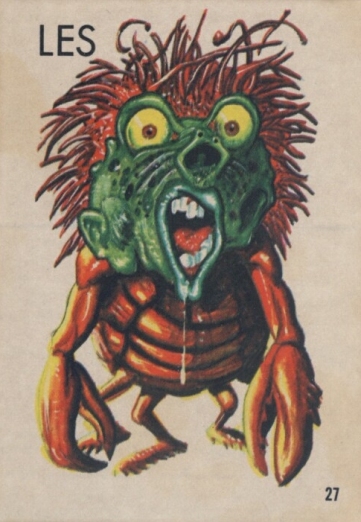 While nothing can live up to the majesty of our last Ugly, #27 is reasonably delightful on its own merits, both goofy and disturbing with its frog-monkey face and alien lobster body. I could see hordes of these things flailing around as some evil overlord's lowliest, most expendable minions, dying in undignified ways but always coming back in droves. 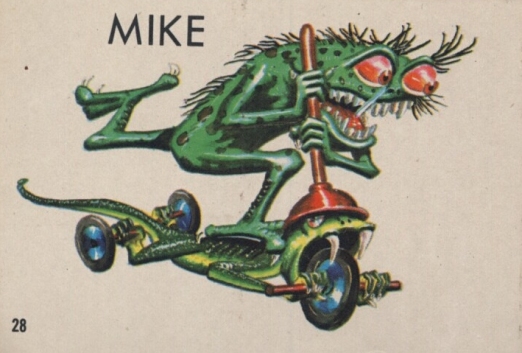 #28 is a surprisingly unremarkable monster by Ugly Stickers standards, but compensates with the most hysterical transportation method I've ever seen. Look at that thing. Tell me with a straight face that you don't want to ride a lizard with a plunger on its head as a scooter. Tell me you don't want that more than anything in the entire world. From here on out, nearly every series one Ugly is engaged in some kind of everyday activity. 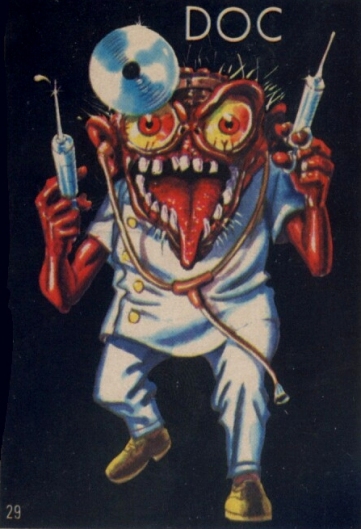 #29 is the first of four unusual Uglies who came with only a single name. Doc, of course, could be a mockery of anybody in the medical profession, and the only Ugly who may (but probably doesn't) boast some sort of formal education. He doesn't look very professional, but who knows, he might just have the cure for cancer in those needles. Or rat urine, whatever. Rat urine seems like something an Ugly might think belongs in a syringe. 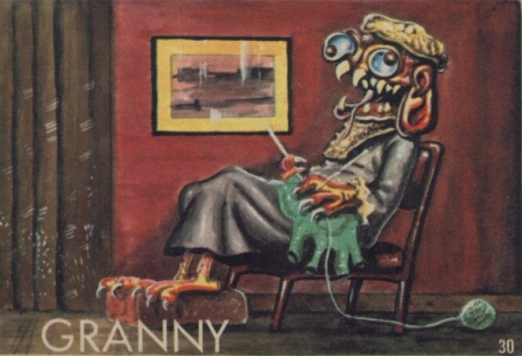 #30, like Doc, doesn't need a first name. This could be anyone's hideous, alien "granny" knitting multi-legged Pajamas for one of her mutant grandspawn. This is the one and only Ugly Sticker with a full background scene, which as a reader pointed out, parodies the famous Whistler's Mother. 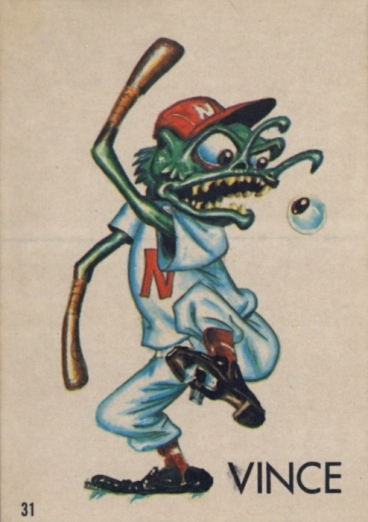 #31 is an Ugly specially tailored for little boys who either play or enjoy baseball, which was practically required by law back when these were all the rage. He's nothing really to write home about, but he does have bats for arms, and of course the Ugly sport of choice is eyeball. 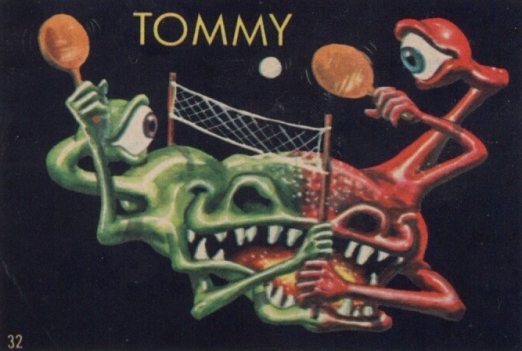 #32, known only as Tommy, doesn't look as lonely as he should be playing tennis with himself. Perhaps his green side and red side have their own independent brains? Maybe there's even a third personality in the middle, so they can keep score. 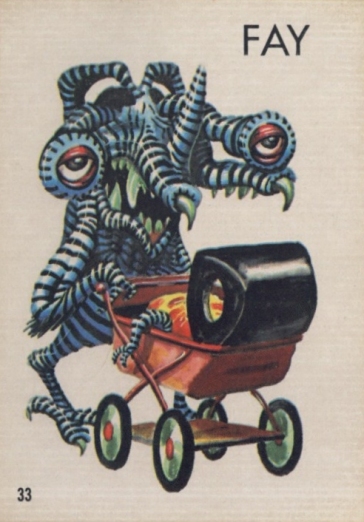 #33 is perhaps the most heartwarming Ugly, seen taking its offspring out for a nice stroll. It's also an especially cool and striking design with its telescope eyeballs, arachnoid jaws, bizarre head ornamentation, bird feet and stylish stripes. Every single thing about this monster is just neat, and really stands out even among the outlandishly diverse Uglies.