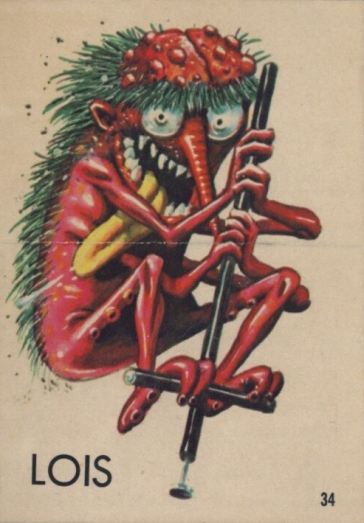 #34's pointed ears, maniacal smile and reddish complexion give me a rather "devilish" vibe. The suckers lining its legs and nearly boneless toes are a nice dash of weirdness, and thin, pointed snouts can add personality to any vicious little gremlin. That scalp is pretty nasty, though...it looks a bit more raw and diseased than the rest of its skin. 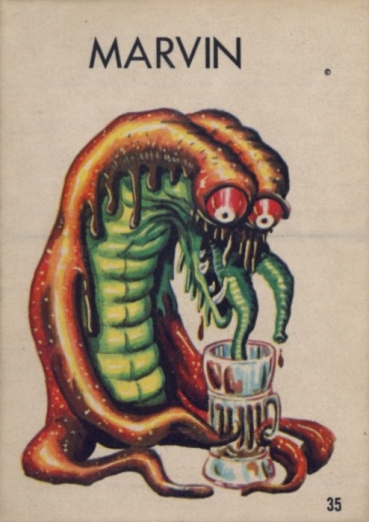 #35 bears some superficial similarities to #3, though more elongated into a worm-like shape with very long, irregular upper teeth. I'm not sure what it's supposed to be drinking here, what kind of mug is that? The green underbelly, dark "drips" of flesh, speckled skin and blood-red eyeballs are all pleasing touches to this slimy thing. 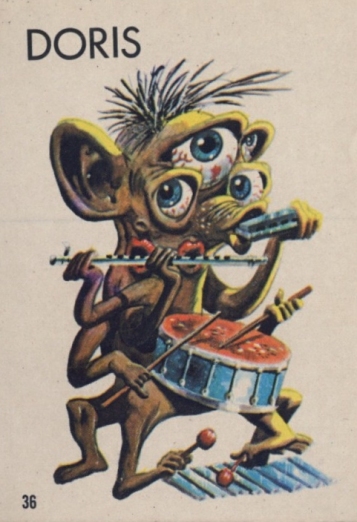 Though the multiple lips and central mouth-snout are an eerie combination, #36 is an especially cutesy Ugly Sticker, and could have possibly gotten away with starring in a children's show as some child's secret friend from mars, probably with magical powers. 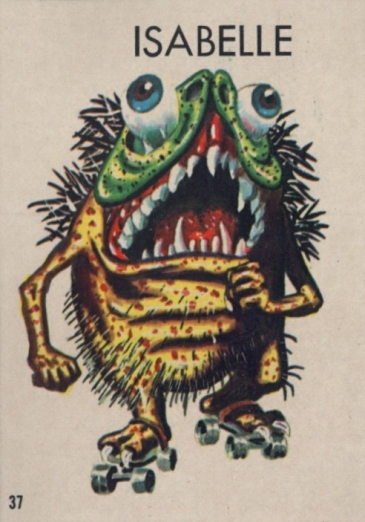 #37 is simple, but satisfying. I like its compact, wrinkly shape, huge sharky mouth and two-lobed snout with those lovely pop-out eyeballs. It would be cool enough doing nothing at all, but I'm really glad it's roller skating. It's such an adorable, sweet contrast to its crazed, ravenous expression...unless of course it only bought roller skates to catch up with tasty, tasty children. 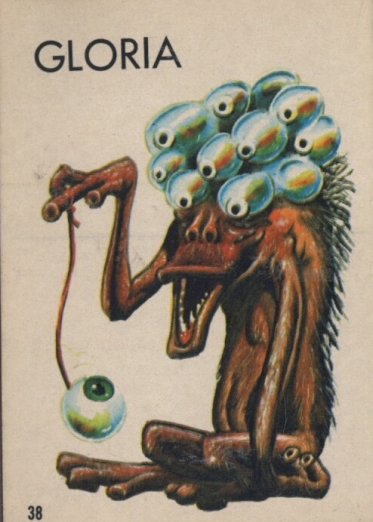 #38 is extremely monkey-like, albeit with sucker-tipped digits and a giant clump of eyeballs. At first glance, it appears to be playing with one of its eyes as a Yo-yo, but on closer inspection, its plaything doesn't match its own eyeballs at all, making this one far more frightening than your typical Ugly. The dim-witted expression only adds to the creep factor of the situation; he's not cruel, of course, but his little brain just might not grasp that body parts aren't always toys. 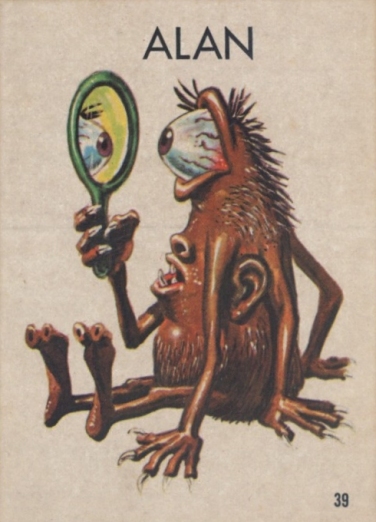 #39 is one of the funniest looking Uglies, mesmerized by its own reflection in what appears to be a state of confusion and shock. I can't look at it without hearing some sort of caveman-voice. "BUH!" it would say, followed by a prolonged "UHHH!" 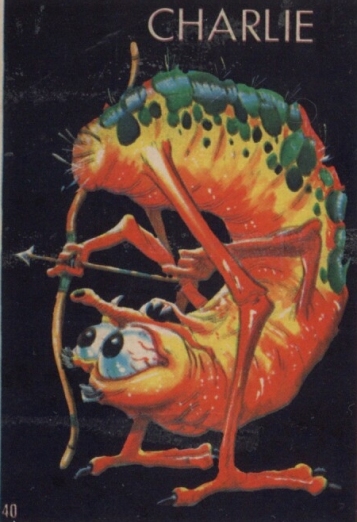 #40 is another one with only one possible name and a black background, an odd choice of status for a long-legged, upside-down grubworm archer. Do you suppose Charlie always walks around like this? 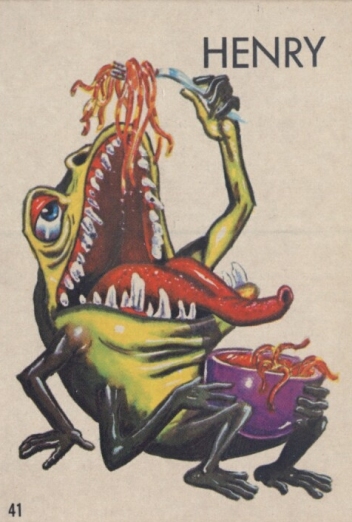 #41 might be the least unusual Ugly from a design perspective, resembling an almost believable amphibian if not for the extra legs, but I do really like this worm-slurping croco-frog and its nice, croco-froggy color scheme. 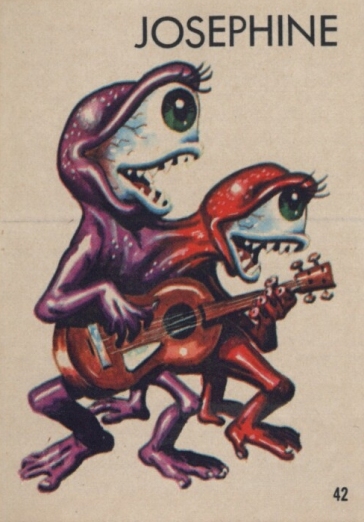 Another really stand-out design, #42 shares the dual bodied, bi-color gimmick of #32 or "Tommy" but does far stranger with it by putting a mouth in each eyeball. Do we look at this as one creature with two mouths or two complete beings stuck together? In any case, I'm sure it rocks that guitar. 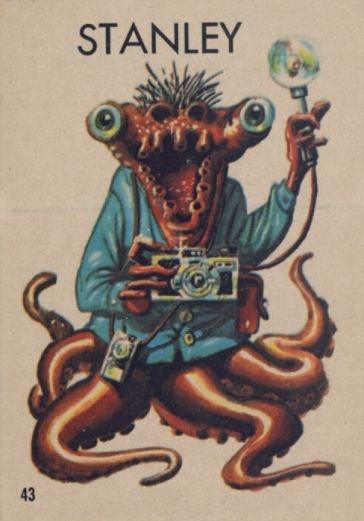 #43 is apparently a bit of a shutterbug, maybe working with the press or just a tourist with expensive (for the 60's) tastes. There's a lot of neat things in this design, like its hammerheaded eye arrangement and octopus legs, but my favorite part are the fleshy suckers instead of teeth. What might those be for exactly? Maybe it suckers onto victims with a bite, then siphons blood through some unseen drilling apparatus in its throat. 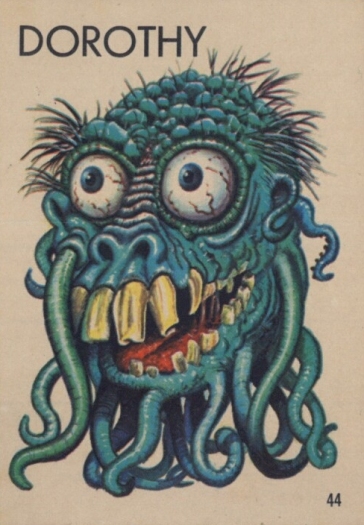 Finall we come to Ugly #44, the very last sticker in the original set. With all we've seen so far, this tentacled, warty, bug-eyed humanoid head feels almost mundane, but for a tentacled, warty, bug-eyed humanoid head to be mundane only goes to show just how fantastic the Uglies really are. The magic of this initial wave would never be recaptured - anywhere - but a second wave of new Uglies would be produced in 1966, and these reviews will be sticking it out to the end!